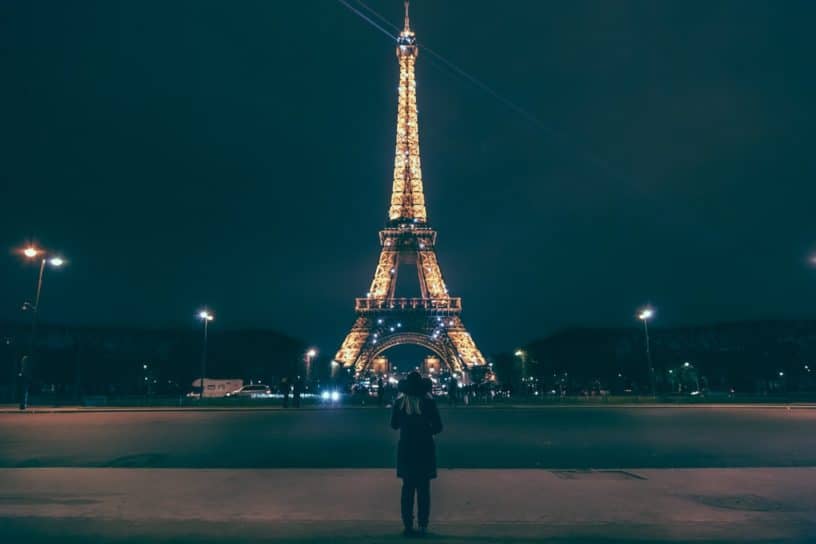 The Eiffel Tower light show is a public display that happens every hour, on the hour during the time between sunset and sunrise.

When the clock strikes 12, the already glowing Eiffel Tower proceeds to perform an awe inspiring light display. The performance lasts a total of five minutes and then you’re back to waiting until the next top of the hour. 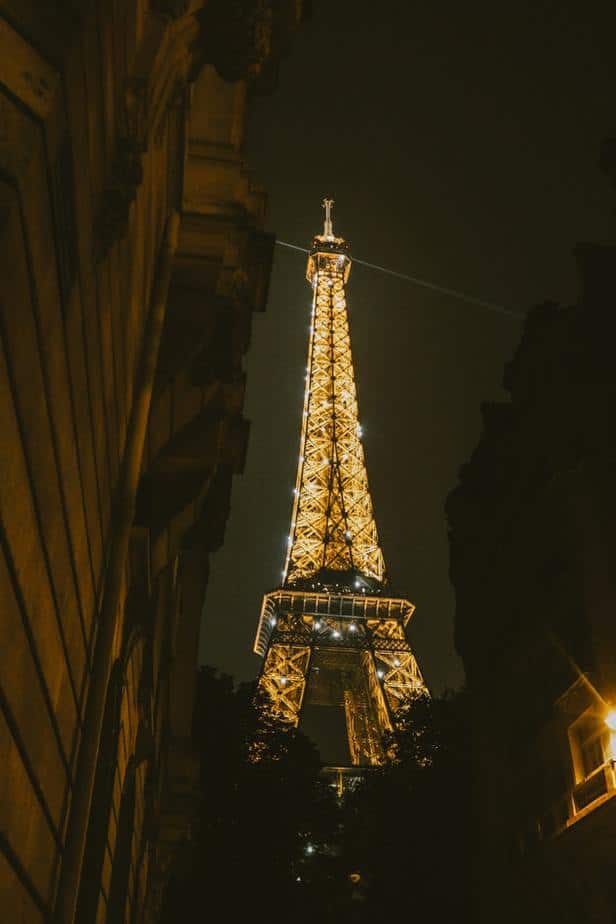 Witnessing this beautiful display is very much about being in the right place, at the right time. In Paris, there are many beautiful spots where one can marvel at the tower by day; but being in prime viewing position by night involves a little more planning.

It has always been a silent mission of mine to find the best spots from which to view the light show by night — here is what I know thus far.

From Right Underneath the Eiffel Tower Light Show

You really can’t go wrong with this absolute cliche.

By day, underneath the Eiffel Tower is the last place you want to be unless you find enjoyment being on the brink of a perpetual human stampede. By night, however, things underneath the iconic tower are more barren and far less overwhelming.

You’ll still be sharing the space with many others who have had the exact same idea, but nowhere near the capacity of the day crowds. Visit the tower on a cold and rainy night and you’ll be left in even further solitude — it’s wonderful! 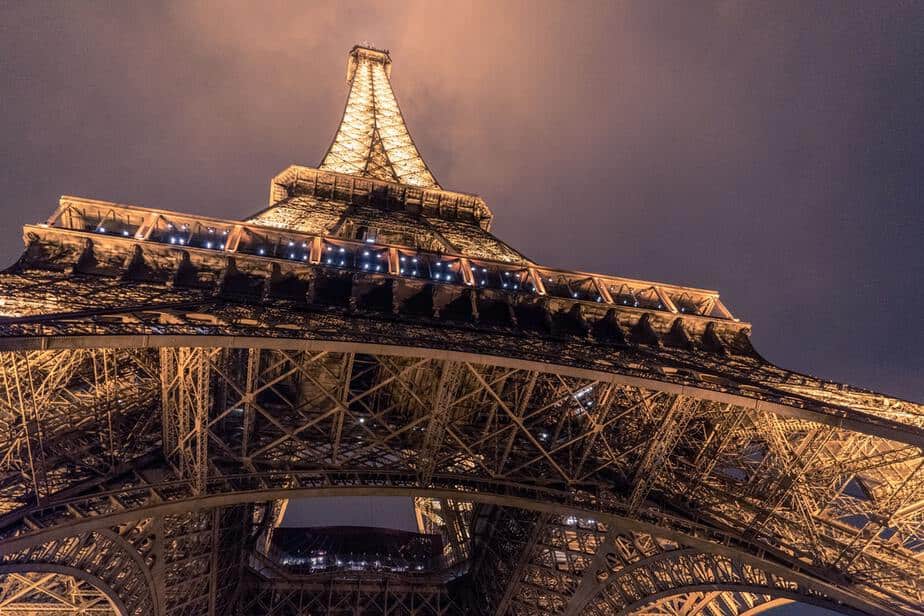 Sometimes viewing the light show requires a bit of perspective. If you find you aren’t connecting to the experience properly from right underneath, take a walk down the Champ de Mars until you’re obverting the tower at more of a distance.

You can lay on the grass and await the next display, knowing that you are physically closer to this historic monument than most people in the entire world.

From the Top of Montparnasse Tower in Paris

Montparnasse Tower in Montparnasse is often overlooked due to its seemingly mundane appearance. The building looks like a regular city skyscraper, likely filled with offices and apartment blocks.

When we’re done judging this book by its cover, consider that Montparnasse Tower is officially taller than the Eiffel Tower and offers a top floor viewing deck that is available to the public. 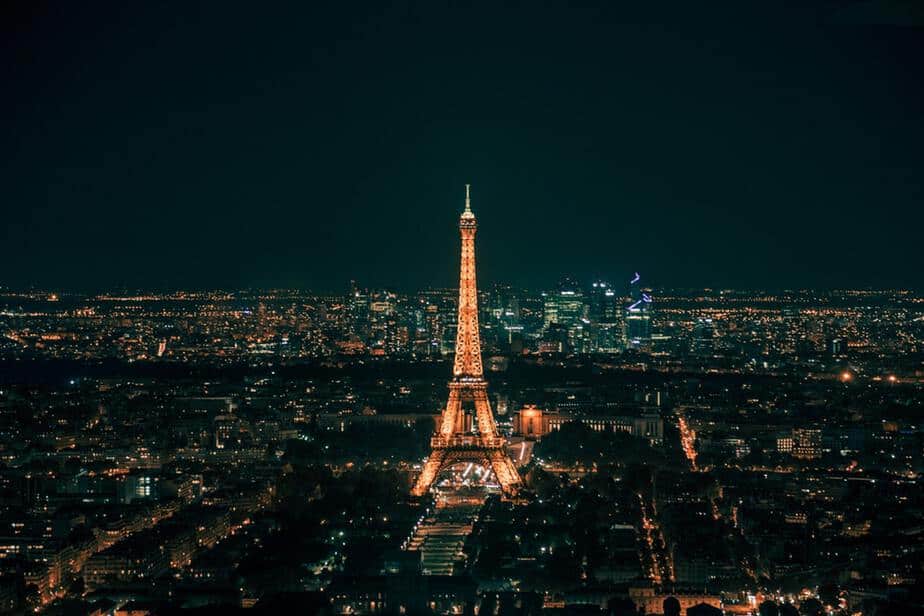 This means that Montparnasse Tower may boast the best panoramic view over the city of Paris. The only other one coming close would be the view from the outdoor steps of the Sacre Coeur Basilica over in the 18th arrondissement .

While the Eiffel Tower’s viewing deck is closed for service by night, Montparnasse’s is not. You’ll be able to go up and watch the light show from one of the highest points in the city all the way through until 11pm each day.

The Montparnasse Tower view is arguably the best birds eye view of the Eiffel Tower before hiring a private helicopter to fly you around.

Admission up to the viewing deck is €18 per person.

From the Pont Alexandre III in Paris

Listen up, I’m going to give you the best nighttime walking route through Paris that I know.

You’ll begin at the Arc de Triomphe one hour before your desired light show viewing time. The Arc is a beautiful monument but, like the Eiffel Tower, is chaotic by day and difficult to properly digest without absorbing the anxiety of the crowds that come with it.

Viewing the Arc by night is something special. Once you’re ready you’ll begin to make your way (by foot) down the very famous Champs-Elysées avenue. You’ll be heading east, as if to be making your way toward the first arrondissement. 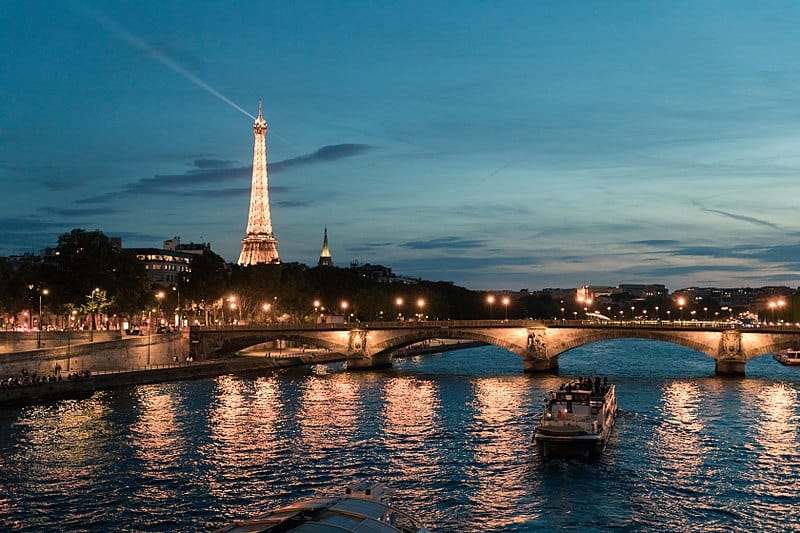 Enjoy the architecture and retail culture along the way and once you pass over a traffic circle you’ll know your turn off is approaching. At Avenue Winston Churchill take a right; this road will lead straight to the Pont Alexandre III.

The Grand Palais is also on this road just before the bridge; you’ll pass it on your right. Take a few moments here to appreciate the exhibition hall that has been the official showcase venue of choice by Karl Lagerfeld and Chanel for so many years.

Finally, make your way onto the Pont Alexandre III and settle somewhere on the bridge in anticipation for the looming light show. The bride has the best over-water view of the Eiffel Tower from the Seine and is absolutely free to enjoy at all times of the night.

From Rue de Montessuy in Paris

The Rue de Montessuy is the residential road of Paris with the best view of the Eiffel Tower both by day and by night. It is on the Left Bank of the Seine, just past Invalides and the area where free guided walking tours go through to the Eiffel Tower. 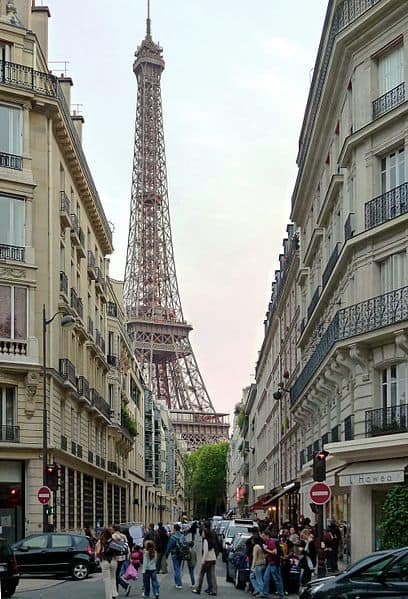 Being a residential road, not many people know that they can hang around here in the street waiting for the display of lights to take place. You need simply stand and wait; the road is generally quiet aside from the many restaurants being enjoyed by locals throughout the evening.

Once you’ve seen the display, and if you’d like to kill some time before the next one (lets be honest, one is never enough), head into Il Sorrentino for some great Italian food! It’s near the northern end of the street.

From Hôtel Raphael in Paris

Most of the luxury hotels in Paris have impressive terraces that offer some sort of view of the Eiffel Tower. The Hotel Raphael is situated just south of the Arc de Triomphe on the Right Bank of the Seine. 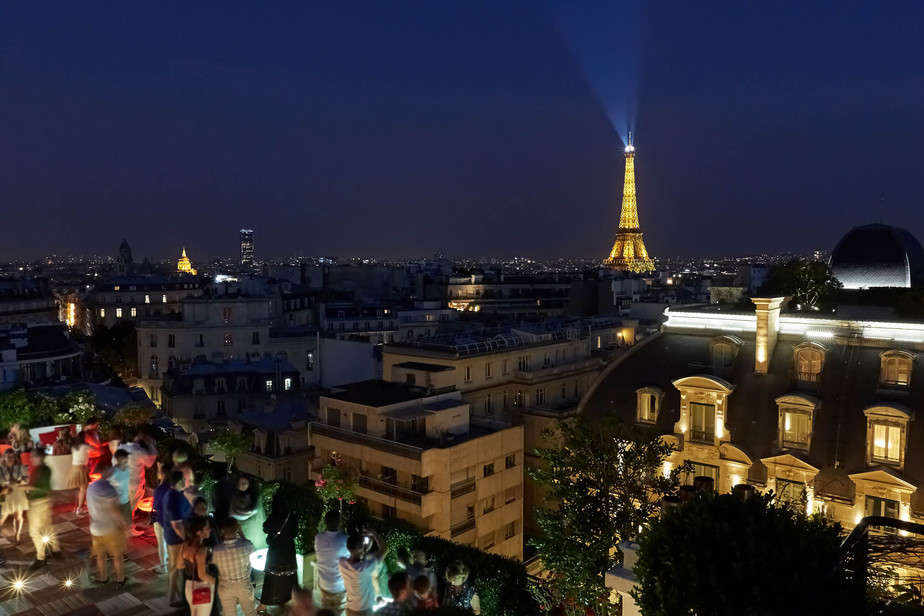 The view from this hotel terrace is my favorite because of how low-key they have opted to keep the space. Instead of plush designs they simply offer wooden tables and chairs. Roses grow wildly up and around the terrace and give a garden-like feel to the space.

There is a full restaurant service but one can even just enjoy a drink or two while awaiting the light show instead.