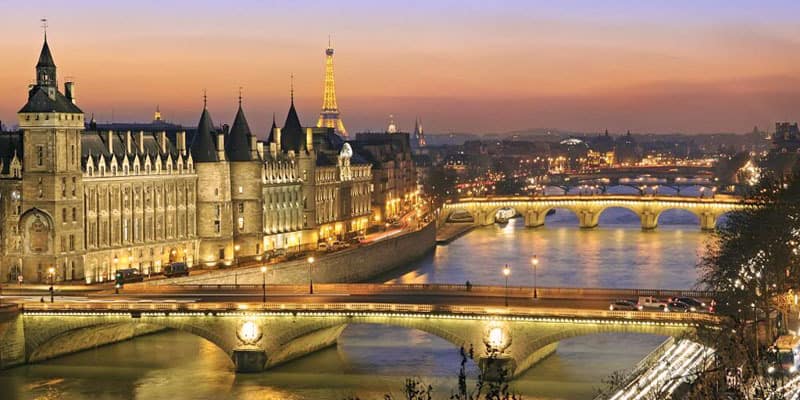 Updated by Farah in April 2022

Paris is split in two parts by the Seine, which creates a real border between the Right Bank and the Left Bank.

Yet we Parisians cross the river everyday, going from one bank to another, and to our islands. In Paris, you’ll never have to walk long on the banks before you find one of the 37 bridges that we have, real links to the heart of the city, and best spots to watch the reflection of the light on the water. Here are some of the bridges that you really can’t miss in Paris.

Accessible by metro line 7 on metro station Pont Neuf, the Pont Neuf was, in its original form, the oldest bridge in Paris. Originally made of wood and stone, it was restored at the beginning of the seventeenth century, yet it remains one of the most important. It links the left bank, to the Island of the Cité and to the right bank, around Châtelet. From there, if you stand in one of the foot stools, you will have a magnificent view over the Louvre or the Eiffel Tower, especially at night. 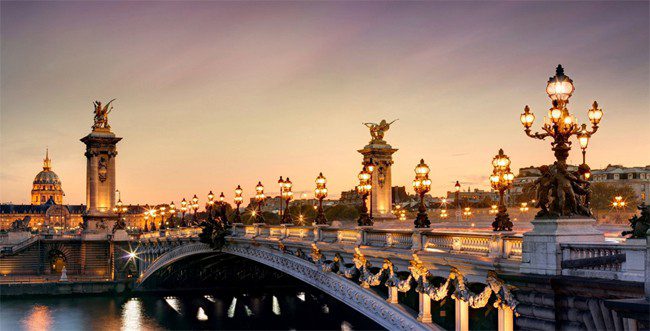 The Alexander III bridge is much younger, as it was inaugurated in 1900. It has Art Nouveau lamps, and was built in honour of the alliance between France and Russia. It is probably the greatest and most majestuous bridge over the Seine, with its golden statues and its columns.

It creates a link between the Invalides on the left bank and the Grand Palais and Petit Palais on the right bank, only a few minutes away from the Champs Elysées, and with a great view over major landmarks and the Eiffel Tower. 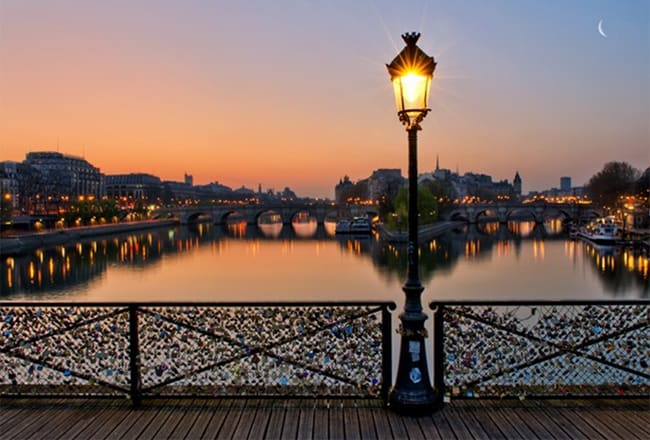 The Pont des Arts is probably considered the most romantic bridge in Paris. Linking the right bank, near the Louvre, and the left bank a few meters away from the Pont Neuf, it has become the place to go for lovers.

Lovers used to have a tradition: you had to lock a padlock with your name and your lover’s name on it on the bridge to make your love last forever, but this tradition is now over, because the padlocks were highly damaging the bridge.

It is actually a good think the padlocks are now all gone, since it now offers a stunning view with no padlocks ruining the scene! The Pont des Arts is also a pedestrian bridge where you can sit or even picnic while enjoying a great view! 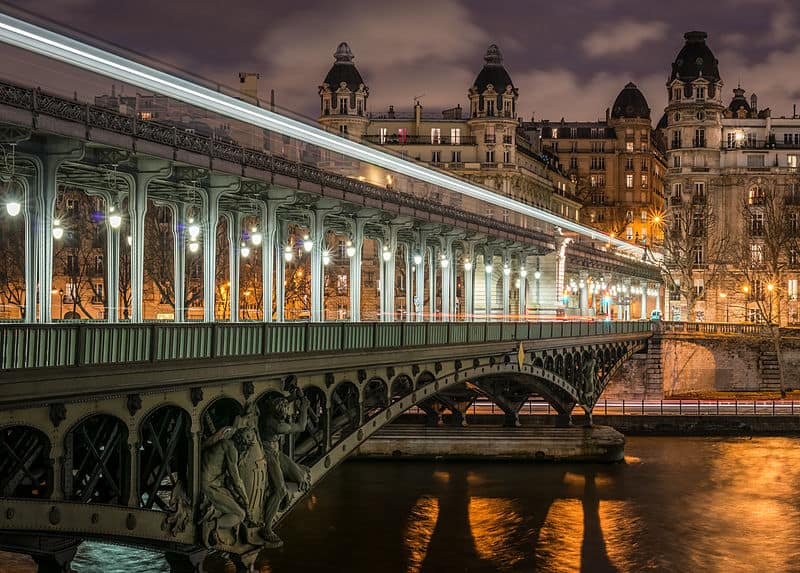 The Bir Hakeim Bridge is one of the most famous bridges over the Seine. There’s an iron viaduct that allows the Paris Metro to cross the river. It’s a gorgeous bridge with its intricate statues in iron and architectural decorations. 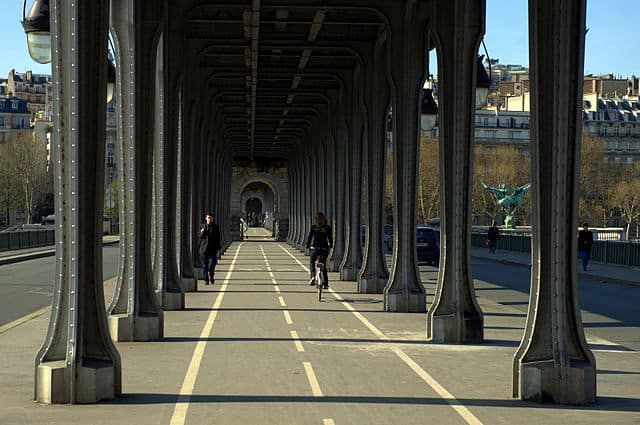 Featured in famous Hollywood hits such as Inception and Mission Impossible, this unique bridge has amazing views of the Eiffel Tower and is one of the best photo ops in the city. Moreover, have you heard about the Statue of Liberty in Paris? The most famous replica is located on Swan island between Bir Hakeim and Passy. On the adjacent river banks, you can partake in one of the river cruises such as the Paris en Scène dinner boat cruises which has many menu option. 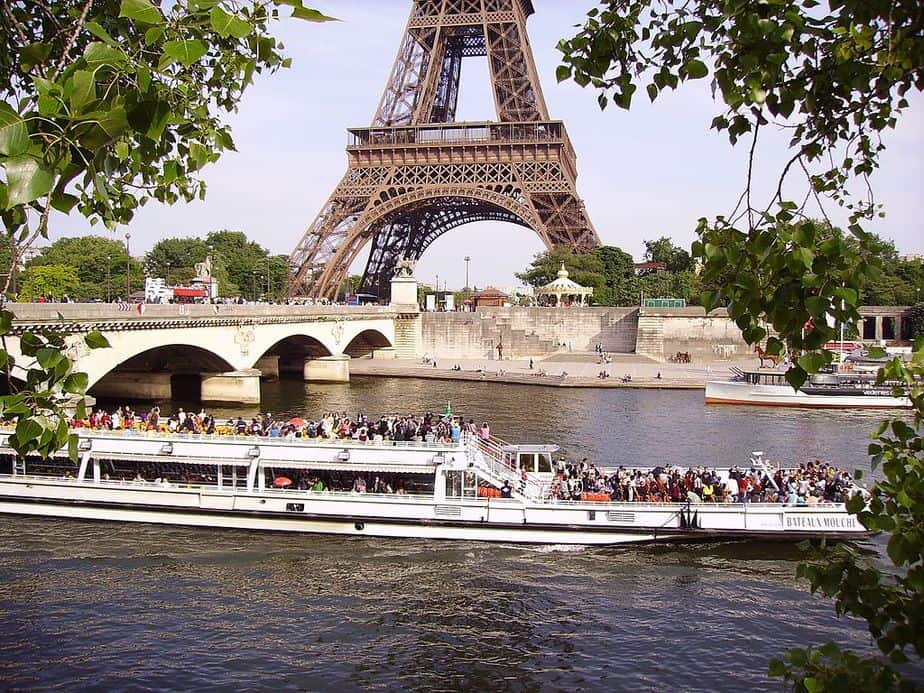 After winning the battle of Jena in 1806, it was Napoleon Bonaparte I who ordered a new bridge to be built and hence, we’ve got the beautiful Pont d’lena or in English, the Bridge of Jena! The current bridge was built between 1808 and 1814 by the engineer Lamandé. It has five arches spanning 28 metres in a circular fashion and four intermediary pillars. It connects Quai Branly, the Champ de Mars and the Eiffel Tower on the left bank to the Trocadéro gardens on the right bank.

The bridge is decorated with beautiful imperial eagles and is one of the busiest, if not the busiest, bridges of Paris. Located close to the Eiffel tower, it offers unobstructed views of the tower and the river. The bridge also features esquatarian statues on all of its sides so make sure to take some photos!

First constructed in 1378, Pont Saint-Michel was built many times over, most recently in 1857. The 62m long bridge with its distinct three arches from today is from 1857 and is maintained to allow easy access over the Seine. It’s located on the left bank of the Seine connecting Place Saint-Michel to the islands on the Seine. A nearby chapel of Saint-Michel gives its name. Earlier bridges were made of wood and later stone.

The Pont Saint-Michel was replaced between 1617 and 1623 with a new stone bridge on wooden piles and was supported two rows of houses and was at the time one of the largest bridges of Paris and one of the busiest too. A royal order by Napolean III declared that the houses be demolished soon after and hence, the bridge today features the insignia of Napoleon. 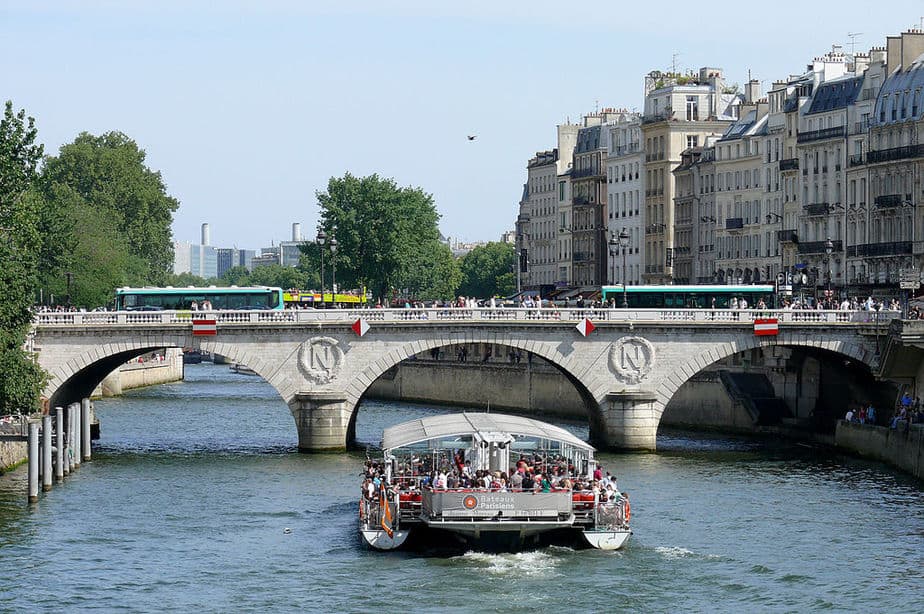 The bridge features heavily in art by various European artists such as Albert Marquet, Albert Lebourg and Henri Matisse. This is probably due to its location with some great Notre Dame views. 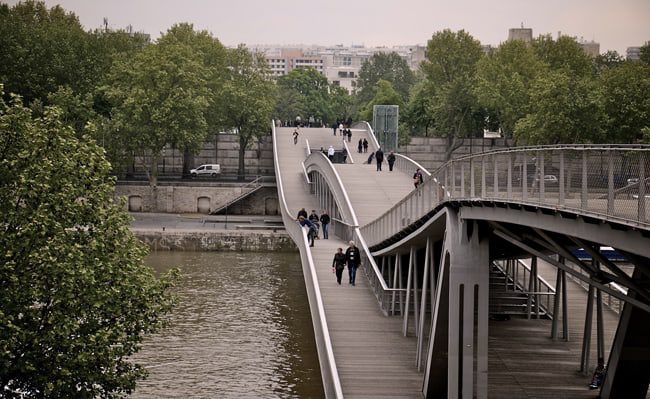 The youngest bridge in Paris was inaugurated in 2006. Named after Simone de Beauvoir, it is extremely modern, and is dedicated to pedestrians and cyclists. It links Bercy on the right bank and the thirteenth district around Tolbiac on the left bank, and will take you to the François Mitterrand library.

8. Pont de l’Alma, its Zouave, and the Flame of Liberty

The Pont de l’Alma is not the most beautiful or impressive bridge in Paris, but it is interesting all the same, thanks to the Zouave on the side. There used to be four soldiers there, when it was built, in 1856. The remaining soldier is used to measure the rise of the Seine.

We say its feet should never be in the water, otherwise Paris will be in trouble. Check out for yourself if Paris is at risk of being flooded! It is also the place where Lady Diana died, and you’ll find the Flame of Liberty, which has become a sort of memorial for her.

9. Pont Mirabeau and its statues

The Pont Mirabeau was made famous by a poem written by Guillaume Apollinaire and using the water going under it as a metaphor for time passing. It is in the list of Historical monuments and it has four statues representing the City of Paris, navigation, commerce, and abundance. 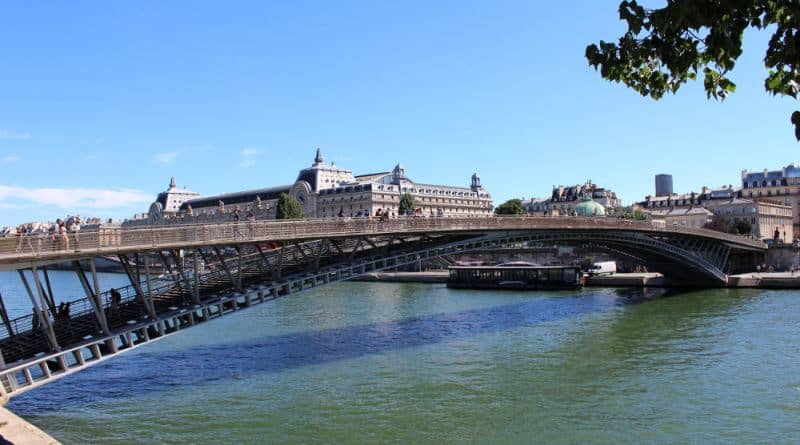 Though not as structurally impressive as your typical Parisian bridge, passerelle Léopold-Sédar-Senghor adds a touch of modernity to the antique surroundings of old Pairs. The bridge was, as you can imagine,  named after the writer, poet and politician, Léopold Sédar Senghor (in 2006). Before, it was actually called Passerelle Solferino or the Pont Solferino. The previous structure was inaugurated by Napoleon III back in 1861, and this was named after the French victory in 1859 at the Battle of Solferino.

The bridges that had stood in its place were often being struck by barges, so they were eventually demolished. This new structure was built in the late nineties,  and links the Musée d’Orsay and the Jardin des Tuileries.

The footbridge was constructed using steel by none other than the Eiffel company that was founded by Gustave Eiffel who designed and built the most famous landmark in the entire world- the Eiffel Tower! The wooden paneling is constructed from exotic Brazilian tree wood, giving it a unique look.

This is actually the bridge you will cross over on your walk from the Eiffel Tower to The Louvre Museum! 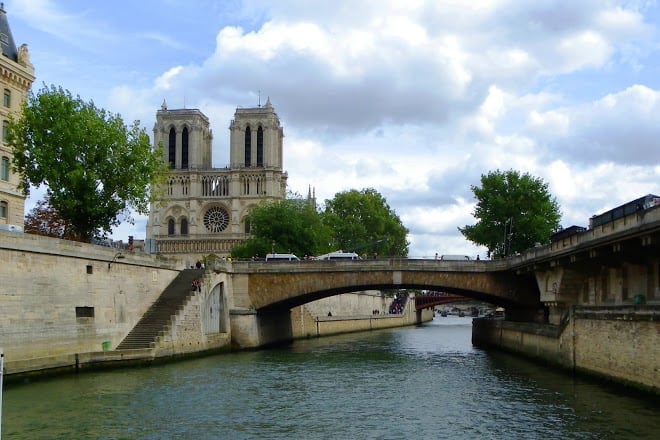 As you might have guessed, Petit Pont means “Little Bridge”. The Petit Pont connects the Ile de la Cité to the Left Bank and is one of the two oldest bridges of Paris. River floods repeatedly destroyed the Petit Pont between the 9th and 18th century, however it was continuously rebuilt, and has kept the same historic name to this day. In fact, the old bridge was closed for pedestrians during the aftermath of the April 2019 Notre Dame fire. It is open now, however sadly the view has changed a bit since the destruction of some of the precious structures of the sacred site. The good news? The Cathedral will be rebuilt. 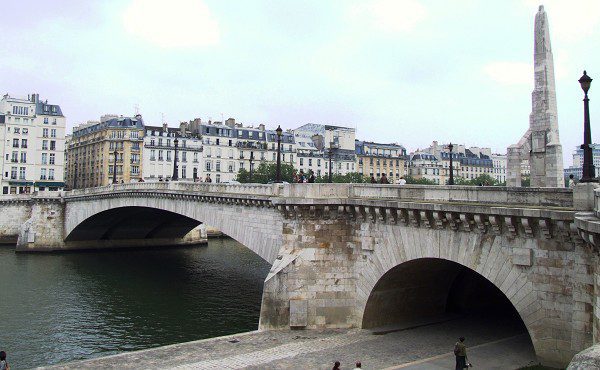 The first bridge built on the site was completed in 1620. The present-day bridge dates from 1928. A tall pylon flanks the bridge, topped by a statue of St. Geneviève, the Patron Saint of Paris. It links the Left Bank to the peaceful Île Saint-Louis.

This bridge connected the Eastern bank of the Seine (le quai Saint-Bernard) to l’île Saint-Louis. It was destroyed by ice in 1637, and again in 1651. A stone bridge was then built in its place in 1654. That bridge was then demolished, and finally replaced in 1928. It went through many natural disasters and flooding, like many of the other bridges in Paris.

You’ll find the statue of Saint Geneviève, the patron saint of Paris, atop of the very tall pylon, designed by Polish-French monumental sculptor Paul Landowski.

The Pont de la Tournelle offers stunning and incredible views around sunset, and is located in one of the most charming areas of Paris.

One way to get a wonderful glance at all the amazing bridges on this list is to do a Paris Seine boat tour, which I highly recommend. Every friend that has visited me has taken my advice and has told me the Seine boat ride was their favorite part of the trip! You can book tickets for a boat tour with BatoBus or Bateaux Mouches, the most popular boat touring companies. I also recommend Vedettes du Pont Neuf, another boat cruise company.

You now know the best bridges in Paris according to a local! I hope you’ve enjoyed reading this article. Don’t hesitate to contact us if you need further information about anything! Feel free to share your favorite bridges in Paris and talk about your experiences!