All About Paris’ School of Fine Arts 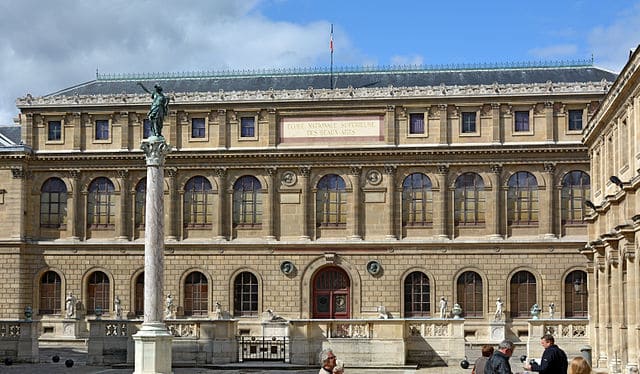 All About Paris’ School of Fine Arts

Paris’ School of Fine Arts, or l’École des beaux arts in French, is a celebrated institution in the city. Countless artists attended the school, and if I could guess, that includes a few of your favorites! Are Eugène Delacroix, or Edgar Degas ringing any bells?! Those are just a few of the schools notable alumni. 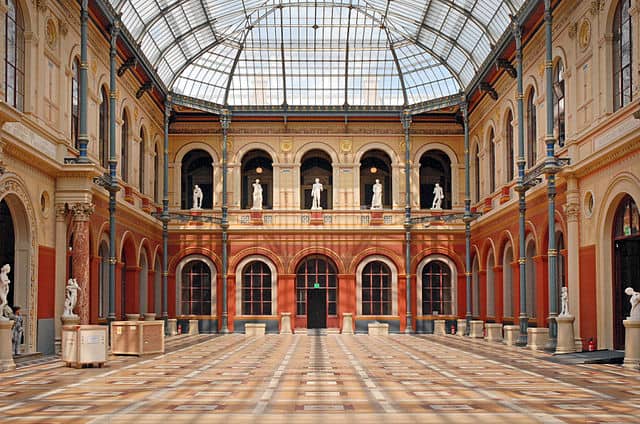 The school’s story started back in 1648, and has been open ever since. The building itself is also really beautiful, and is in one of my favorite areas of Paris, the 6th arrondissements. It’s not too far from the Louvre and the Musée d’Orsay, respectively.

Do you want to learn more about the l’École des beaux arts? Well, you’ve come to the right place. Keep reading to learn all about Paris’ School of Fine Arts!

Opening hours: The school is not open to the public, except for the art exhibitions. Visit their website below for more details.

A Brief History of Paris’ School of Fine Arts 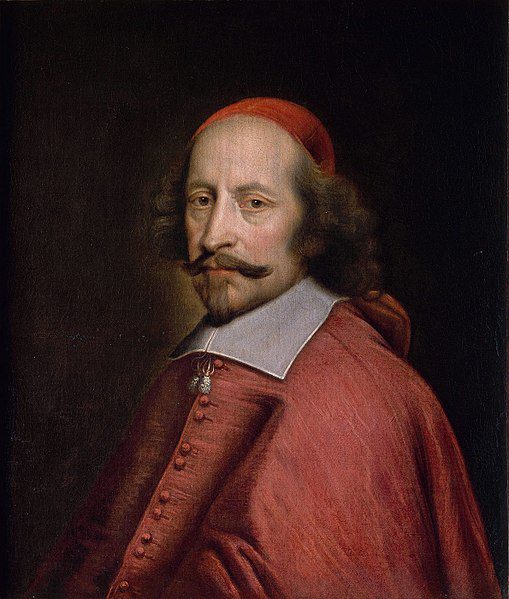 As I already told you, the school first opened in 1648. In it’s earliest days, it was known as the Academy of Fine Arts (Académie des Beaux-Arts), and was opened thanks to a man named Cardinal Mazarin. The Cardinal hailed from Italy, and was a celebrated politician and diplomat. He also served as the minister to the young king Louis XIV, who was just 5 years old at the time.

Like with most things, France was determined to have the best of the best, and this including art institutions. Italy was known world wide for it’s celebrated artists and masters, and already boasted many fine art schools in Rome and Florence. Refusing to be outdone by their Italian peers, the Academy of Fine Arts was opened.

The school was very particular about who they accepted, but once you were in, you could expect to take classes on drawing, painting, sculpture, engraving, and architecture, in addition to some other mediums. As Louis XIV grew, he eventually began to choose the most talented graduates to help him decorate his palace at Versailles.

In 1863, Napoleon III decided to give the school independence from the French state. The school’s name was then officially changed to l’École des beaux arts!

So, what could you expect to study in this new and improved fine arts school? There were two curriculums available to its students: the “Academy of Painting and Sculpture” and the “Academy of Architecture.” Both options focused on studying the most classic of all art: from Ancient Greece and Rome. 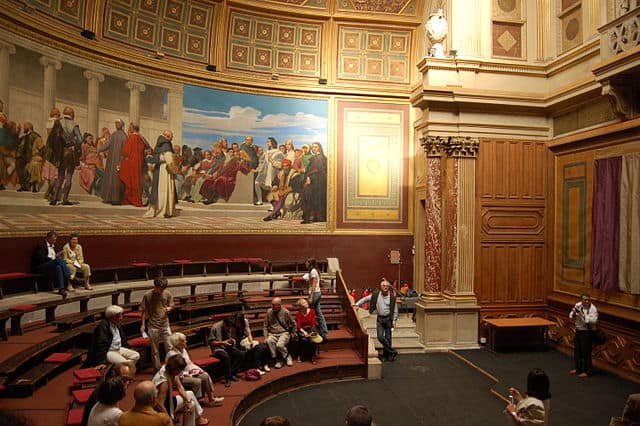 A lecture hall inside the school by KoS – WikiCommons

Competition was fierce at the school, and students were required to prove their skills by completing basic drawing assignments before they could move on to the more complicated stuff like painting and figure drawing.

In addition to this, each year, one special student was awarded the Grand Prix de Rome, which included a scholarship to study art in Rome. Many of the artists that won the scholarship went on to become world famous: Pierre-Auguste Renoir and Jean-Honoré Fragonard are just a few. Surprisingly, the sculptor Auguste Rodin applied for the scholarship, and was rejected, three times! Rodin is one of my absolute favorite artists, so you can imagine my surprise when I learned this! This just goes to prove how intense the competition was at the school.

Flash forward to May1968 and the student riots. After the protests were over, the architecture department was separated from the rest of the school. The school was renamed the École nationale supérieure des Beaux-Arts, and is considered to be the top art school in France. Think, the Ivy League art school in France. Ah, I could only dream of attending!

Their are over 500 students that attend the school today, and more modern forms of art, like photography and hypermedia have been added to the program of studies.

The architecture of Paris’ School of Fine Arts

The building that houses the school is so interesting, that it deserves its own section in this article! 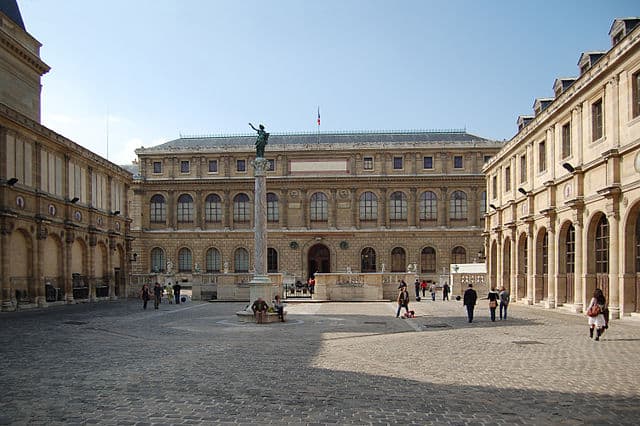 The architecture of Paris’ School of Fine Arts by KoS – WikiCommons

I already told you that the school is located in the 6th arrondissement. It is nestled between the rue Bonaparte and the Quai Malaquais. According to the school’s website, most of the buildings date back from the 17th and 19th centuries. The oldest buildings were constructed in the early 17th century as a part of a monastery. These buildings were actually converted into the Museum of French Monuments during the French Revolution.

After the museum closed in 1816, the buildings were given to the School of Fine Arts. The rest of the buildings are thanks to an architect named Félix Duban. Duban was commissioned to work on the main building in 1830, and he also aided in realigning the campus in general.

All of the buildings in the complex were classified as historical monuments in 1972! You’re not allowed to enter the school if you are not a student, but they do put of exhibitions. Visit their website to learn more!

The school itself not only boasts some amazing architecture, it is also the birthplace of an architectural movement called, not surprisingly, the Beaux Arts movement. This architectural style is considered to be a combination of French Neoclassic, Gothic, and Renaissance styles, with the incorporation of glass and iron. If you look around Paris, you’re sure to spot some of the Beaux Arts look! Is the Grand Palais coming to mind? I hope so! 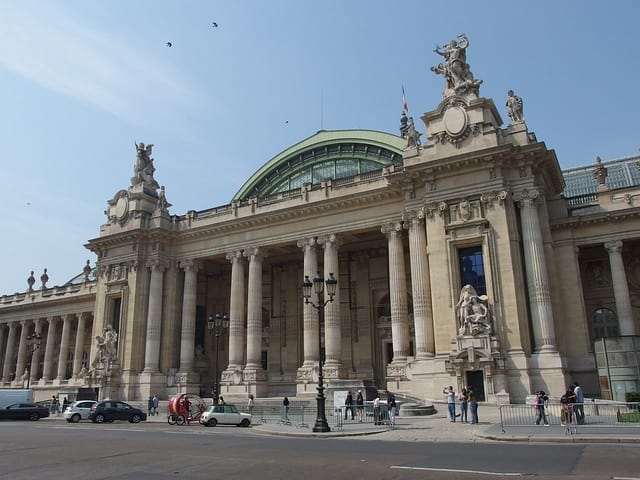 The Grand Palais, an example of Beaux Arts architecture by Guilhem Vellut – Flickr

Architects that were associated with this movement went on to design places like the Boston Public Library, the New York Public Library, and the Museum of Natural History and the Sainte-Geneviève Library in Paris. 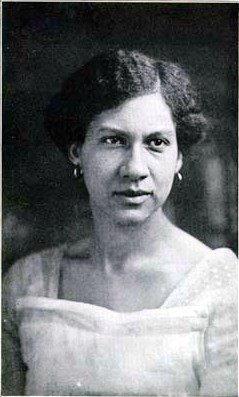 This article would not be complete without a round up of some of the most famous School of Fine Arts attendees!

You may notice that there are very few women on this list. This is mostly because women were not allowed to attend the school until 1897! This one goes out to all of my female readers…if you’re an artist, apply to Paris ‘ School of Fine Arts so we can get some more ladies on this list!

Now you know…all about Paris’ School of Fine Arts! If you are an artist yourself, I hope I have given you the inspiration you need to apply for the school. If you’re more of an art observer like myself, I hope you’ve enjoyed this little history lesson of the day!

Do you want to learn even more about Paris and everything there is to discover in this city? Click here to learn more about all of our walking tour options! There’s a reason we’re called Discover Walks!