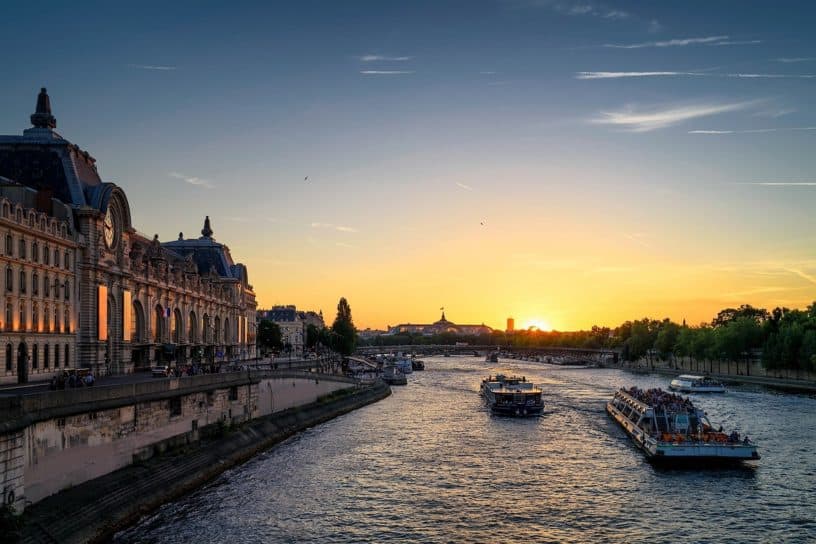 Facing the giant Louvre Museum, and elegantly lying by the Seine, the Orsay Museum (Musée d’Orsay) is one of the major Paris museums and an absolute must-see. Built in a former train station, Orsay is now one of visitors’ favorites!

Famous for its very rich impressionist and post-impressionist collections, and bathed in the smooth sunlight that passes through the glass vaulted-ceiling, the Orsay Museum offers to travelers the once-in-a-lifetime experience of admiring world renowned works of art by the most acclaimed European masters.

Rising five stories above the ground, and despite a much simpler and smaller layout than the Louvre, Orsay is one of the richest museums in France. Its 80 000 works of art (you said the Louvre had 685 000?) are amongst the most famous. Therefore, it is quite hard to select only a few masterpieces and recommend them for you to see.

However, I managed to pick 10 iconic Musée d’Orsay artworks, you should absolutely admire during your visit. And if you want to pre-book your tickets online and avoid some waiting time, follow this link (E-tickets). 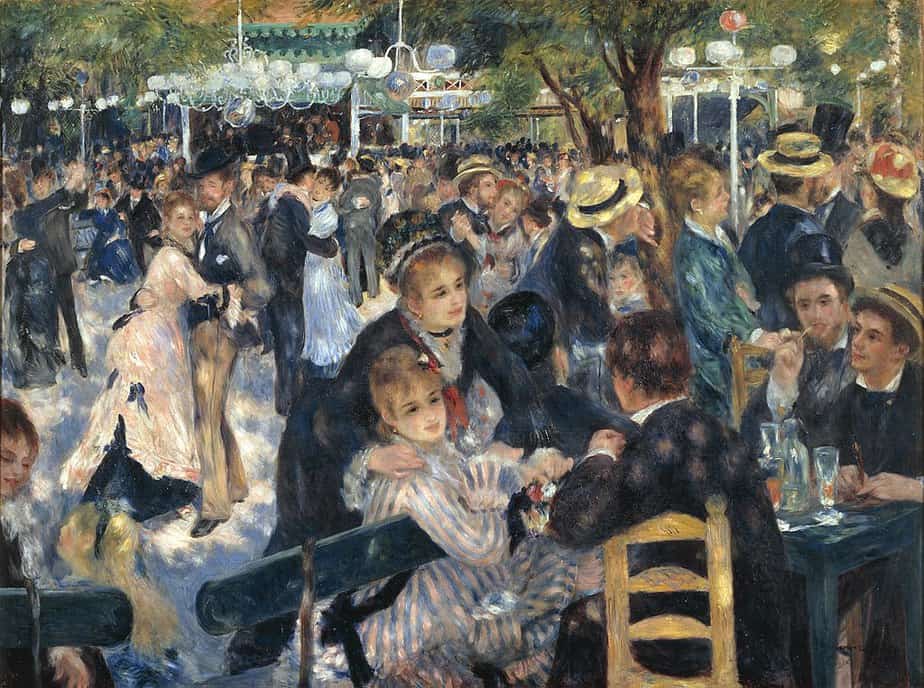 A reference in early Impressionism, Renoir’s most important masterpiece captures the frenzy and joyful atmosphere of a popular dance in Montmartre. This artwork is one of the Musée d’Orsay highlights and one of the most popular paintings in the museum.

The subject of this Musée d’Orsay painting is Moulin de la Galette which opened in 1812. This was one of the most important guinguette of Montmartre in the yard of a wooden windmill. You may still enjoy a meal and admire the windmill in Rue Lepic, on the slopes of Montmartre hill.

The restaurant is now a bit classier than the former guinguette, but I personally enjoy the typical Montmartre feel that emanates from this windmill, less tacky than the Moulin Rouge.

Entirely painted on location despite its big size, the painting includes several of Renoir’s friends among the crowd enjoying the fun times at a Montmartre typical guinguette. Trying to capture movement and impressions, the Bal du Moulin de la Galette is one of the most representative artwork of early Impressionism.

The painting is firmly anchored across the upper-right to lower-left diagonal that separates the foreground and the background, thus giving a feeling of depth that well complements the sense of movement, amplified by blurry contours.

You cannot miss this one in the temple of Impressionism that Orsay is! The Museum also displays a lot of Renoir’s work, most of them being famous and beautiful.

At last, if you want to see how well Montmartre spirit was captured by Renoir, you may book our 90-minute Montmartre Tour! 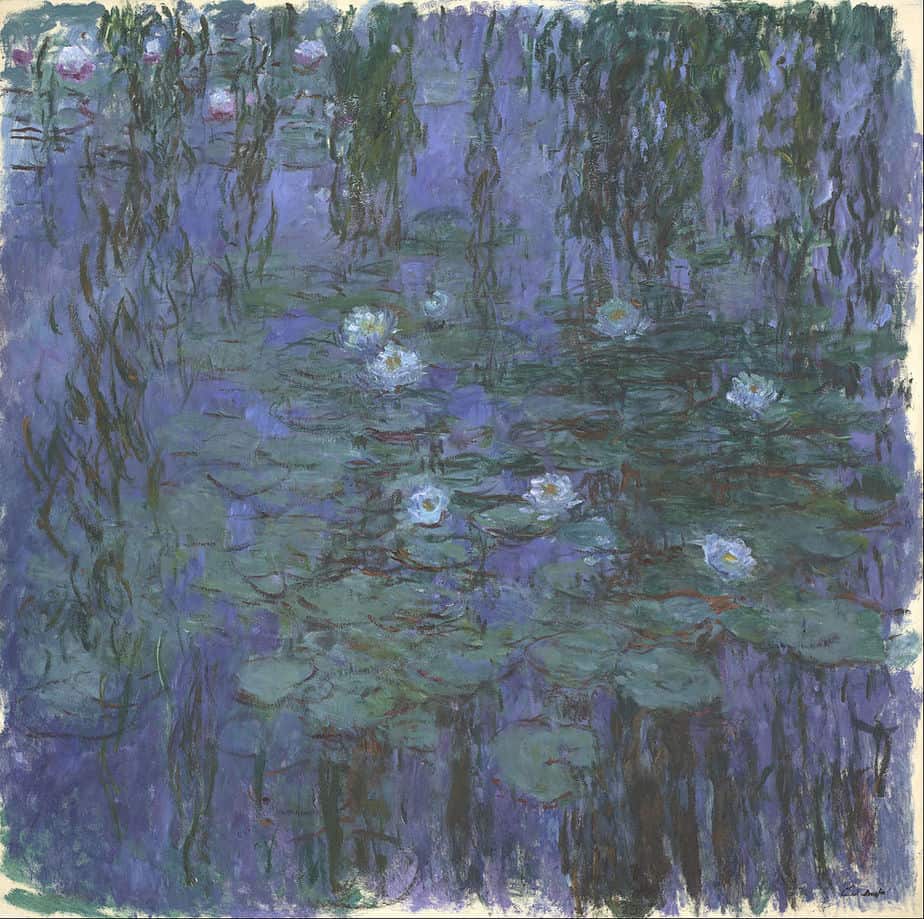 This big painting is only one of the approximately 250 ones of the Nymphéas series by Monet. Nymphéas is the scientific name for Water Lilies, a water plant that Monet had grown in a pond in his beautiful gardens in Giverny (Normandy). His garden was an infinite inspiration to him, and the Nymphéas series is probably his most iconic creation. Today, they are shown all over the world, though the Nyphéas Bleus is one of the Musée d’Orsays’ more famous highlights.

Painted during World War I, these Blue Water Lilies are not the most representative of the series. The section Monet chose does not allow the viewer to have any point of reference as you can’t see the shore or the sky. The massive dominance of blues and greens almost gives the impression of looking at an abstract piece of art, if seen from too close. Significantly less precise than some other paintings from the Nymphéas series, this one is definitely one of a kind and a must-see!

You may also visit the Giverny house and Garden. We recommend doing so between May and September. 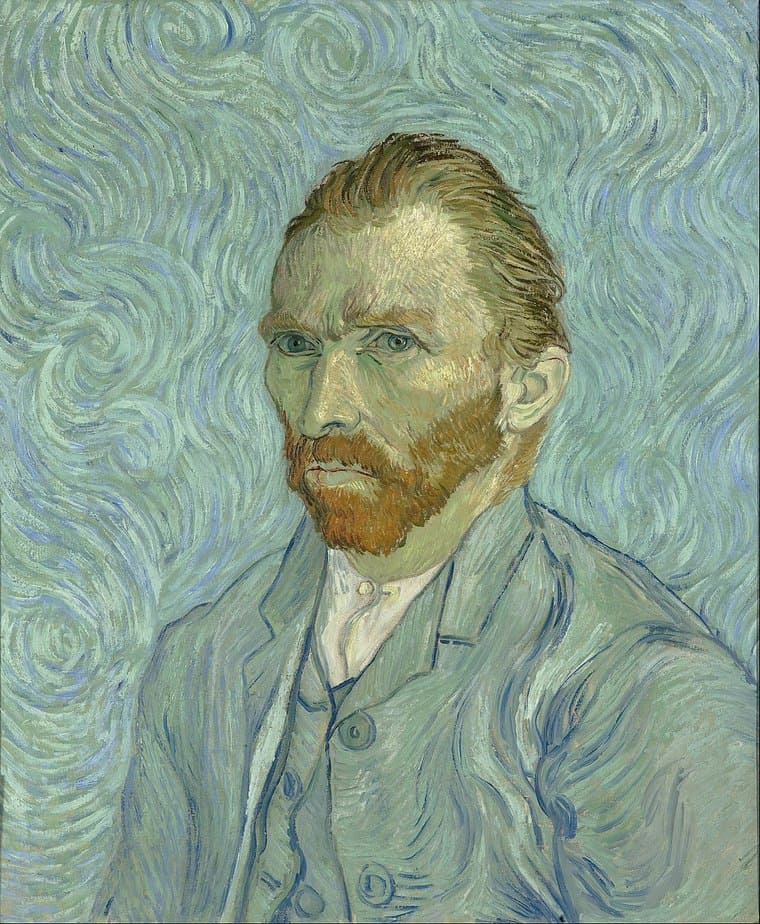 While the Musée d’Orsay paintings collection houses multiple works by Van Gogh, this one is certainly a highlight. This self-portrait of Van Gogh is one of his 43 self-portraits, and definitely the most famous one.

With very neoclassical lines, using volutes and comma-shaped brushstrokes, the painter makes with this post-impressionist painting a work of art precursor of the Expressionist movement in the early 20th century.

The background is in sheer contrast with Van Gogh’s face and represents his inner struggles – Van Gogh suffered many psychological troubles.

If you are in a hurry to catch all the Musée d’Orsay highlights, this self-portrait is a good representation of how art evolves through time and how artists can sometimes slowly slide from one movement to the other. 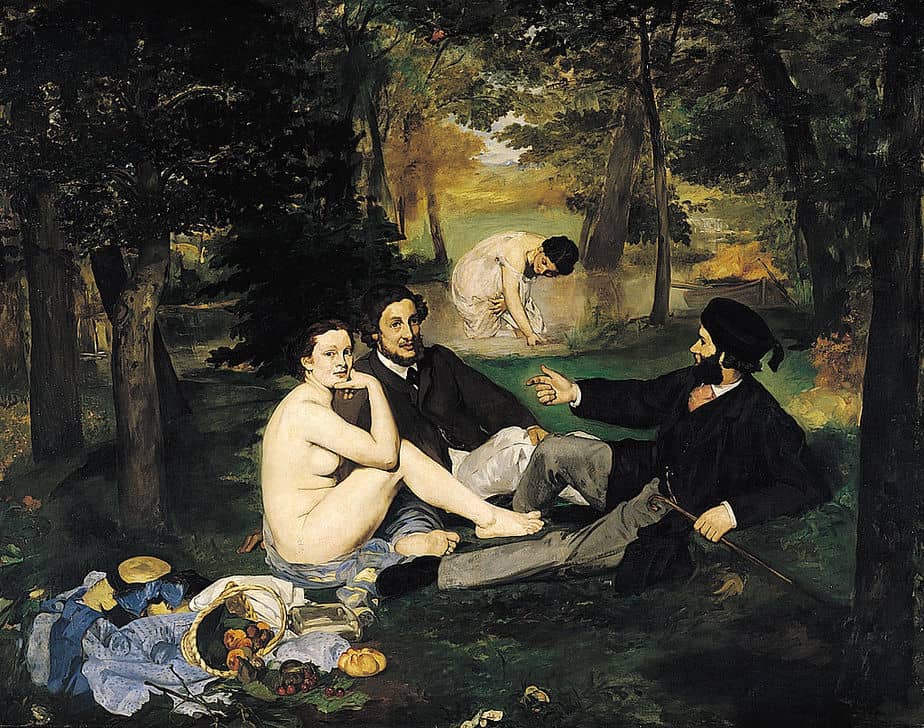 Inspired by a painting by Titian (Pastoral Concert, you may see it at the Louvre), but twisting it by removing any allegorical feel and by clearly setting the scene in his own time (as seen from the clothes), Manet painted here an extremely controversial work. The presence of a nude woman in the company of two dressed gentlemen, with no allegorical or mythological reason, sparkled the most outraged reactions.

This painting was first exposed at the alternative Salon des Refusés (salon of the rejected). If you want to know more about the concept of Salons in the 19th century, this article might interest you.

While you are at it, don’t miss Manet’s other controversial Musée d’Orsay artwork : Olympia. 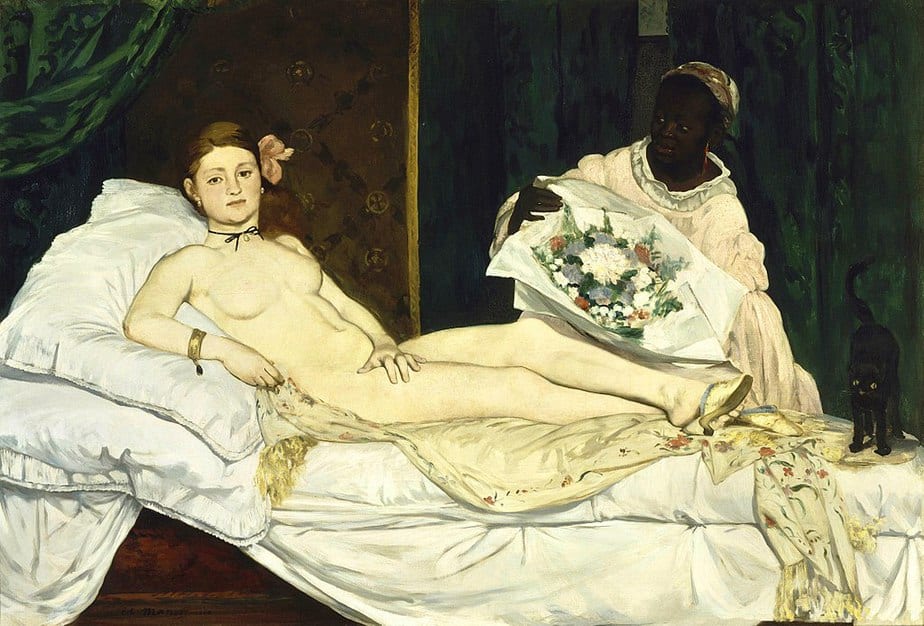 If you are reading this while at the Musée d’Orsay and that you have been shocked by the Luncheon on the Grass, then be prepared for the coup de grâce! Courbet’s Origin of the World is raw, simple and so unquestionable that it still shocks some people today. When uploaded to blogs or webpages, some servers even identify it and censor it as a pornographic image, thus proving that Courbet struck a nerve with his masterpiece. 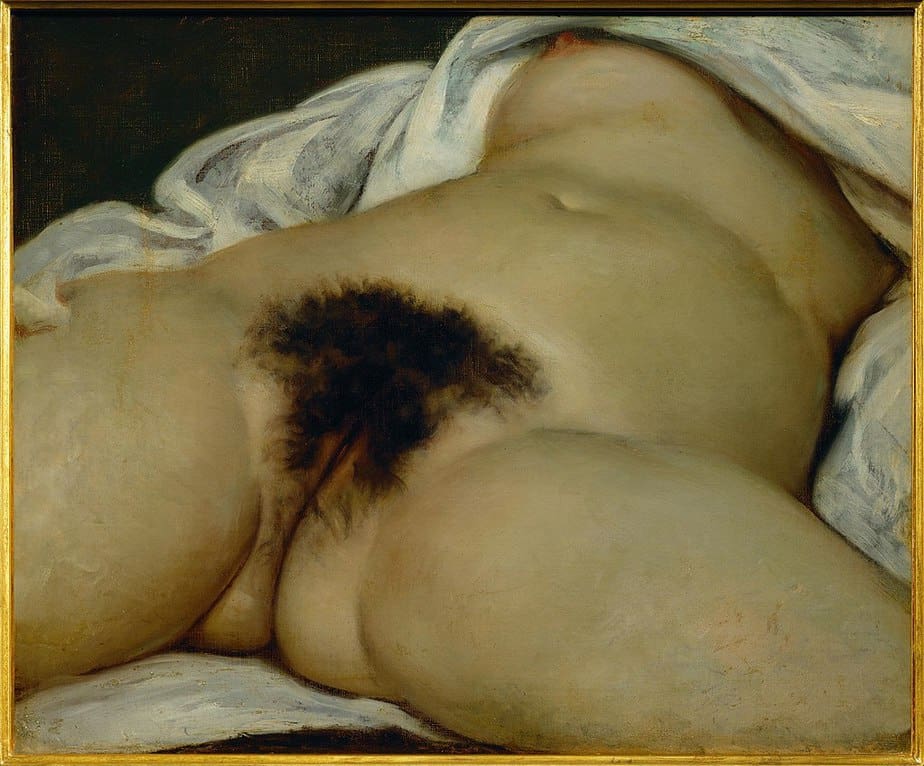 However, there is nothing simpler than what Courbet painted here. The Origin of the World frontally shows a woman’s genitals. The sheets of the bed on which she lies upon cover her face. The otherwise fully Realist work foresees the liberation from codes and its tumultuous controversial history makes it a must-see Musée d’Orsay painting. 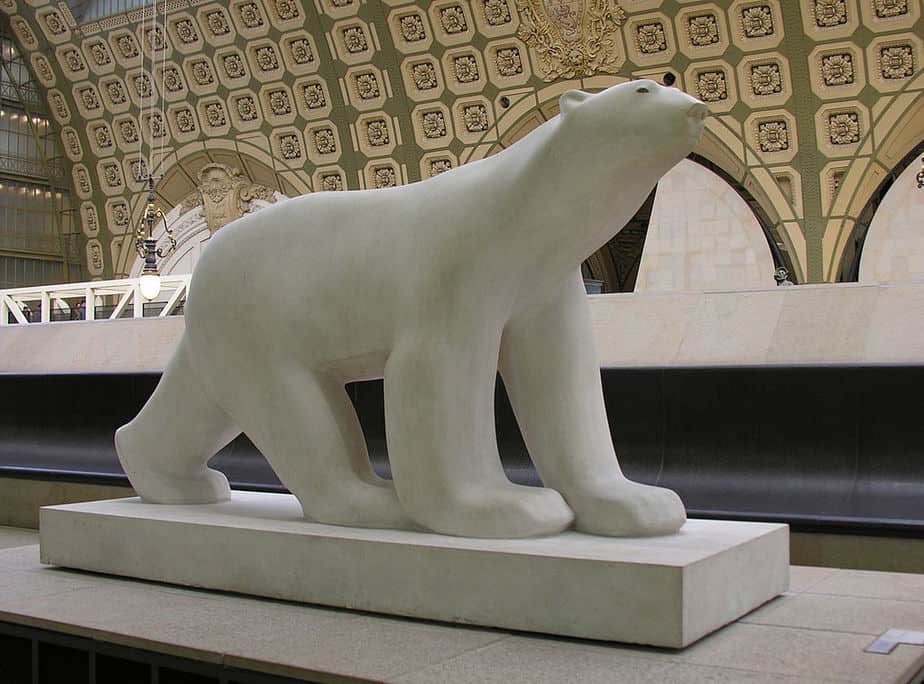 In addition to famous paintings, the Musée d’Orsay also displays plenty of ohter stunning artworks. And the Polar Bear  sculpture is one of the most recognizable ones.

Pompon wanted to oppose Rodin’s aesthetics and started a series of animal sculptures. Starting with a detailed sculpture first, his method was to slowly remove all details to keep only the core and essence of the animal, with a stone as smooth as possible.

The Polar Bear is his most perfect example of that. Strong and simple lines perfectly depict the essence and strength of the bear, in the purest of ways. Definitely a different kind of art than you might expect to find here, but a Musée d’Orsay highlight nonetheless.

The original sculpture of this young dancer was made of skin-colored wax, but the version presented at Orsay is made of bronze. The Realism is taken to another level on this statue, definitely one of the most impressive Musée d’Orsay artworks.

The clothes are real and the original version had real hair, thus pushing the Realism codes to the extreme. Presented in a display glass case, the statue was much criticized in its time for giving the impression that the little girl was an encaged animal.

This massive Realist piece by Courbet is one of the highlights of the Musée d’Orsay. And it sparkled a lot of controversy when it was first exposed.

In appearance, the scene is quite trivial. We see a simple burial. But placed back in the early 19th century context, it was really uncommon for a painting this size to depict common people. Usually, very large paintings were reserved for historical, religious or noble depictions. Here, Courbet breaks the rules and depicts a common scene, not idealized, in a wall-size canvas.

It was also pointed that the people was in the center and emphasized while members of the clergy were on the left side. At first, the painting was sometimes thought anticlerical. However it is now commonly considered that it mostly depicts the strive to live together despite differences, in a sad and common moment like this burial. In post-revolutionary France, coexisting despite classes was a struggle of every day. 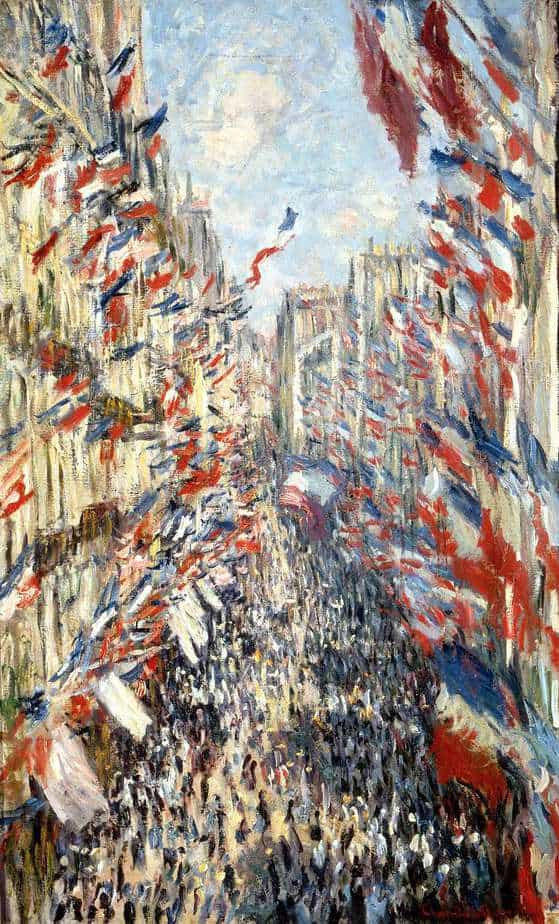 Impressionism seeks to capture…impressions. Well, there isn’t one piece of art in the whole Musée d’Orsay which better captures them than Monet’s patriotic Rue Montorgueil.

Depicting hundreds of French flags waved at the windows of Rue Montorgueil during an exceptional celebration of “peace and work” on June 30, 1878, this Musée d’Orsay painting is a perfect example of Monet’s Impressionism. Lines are not clear, as brushstrokes are quick. Shapes are suggested. However, the overall impression of frenzy dominates and the party-feel is clearly present.

The Rue Montorgueil is one of the most typical streets in the heart of Paris. Crowded, lined with amazing restaurants and bistrots, you may enjoy there the bustling life of the Halles area, day and night.

Enter any Italian restaurant at the lower end of the street to enjoy unforgettable truffle pizzas, shop for French cheese, buy beautiful flowers for your romantic evening or simply enjoy sea food at the Rocher de Cancale. Also, don’t miss the beautiful Christmas lights when come the Holidays !

In Paris, Guimard is famous for being the creator of the iconic Metro entrances.

This small bench gives an extravagant rendition of the style of Art Nouveau – in which floral inspiration is central. Originally designed to be placed in a corner, as the small shelf shows, this piece is one of the finest decorative Musée d’Orsay artworks.

BONUS – The Ballroom on the 2nd floor

Before leaving the Museum, do not miss the 2nd floor ballroom and its huge and grandiose chandeliers, and its luxurious decor! 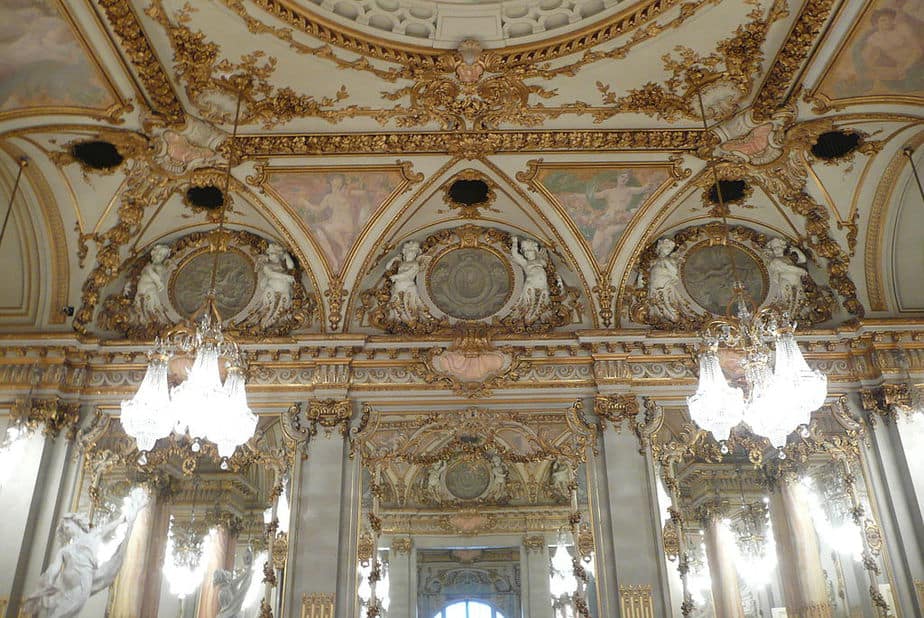 When? How? How much?

Musée d’Orsay is open Tuesdays through Sundays from 9:30AM to 6:00PM, with night hours extending to 9:45PM on Thursdays.

Tickets’ cost varies depending on what you wish to visit. The museum adult access costs 14€, but you may decide to pay 18€ instead, and get a double ticket opening access to Orsay and the Orangeraie Museum OR the Rodin Museum.

Young non-EU citizens (below 25 years old) only pay 11€ to access the museum. EU citizens below 25 y/o , unemployed people, Paris Museum Pass holders and many other people have free access to the museum. A simple way to get tickets is to purchase E-Tickets on Tiqets.com and avoid long waiting lines.

1 ticket to the Orsay Museum gives you reduced entrance to other Paris attractions, including the Paris Garnier Opera House, during 8 days.

Access is free for everyone on the first Sunday of each month, and adult ticket costs only 11€ for all after 4:30PM everyday (except Thursdays), and 6:00PM on Thursdays.

At last, you may also decide to tour the Museum with us by booking our Skip-the-Line Orsay & Montmartre Tour for a complete dive into the 19th century lifestyle, or you may also design your own customized tour for a perfect half-day in Paris, including the Musée d’Orsay!