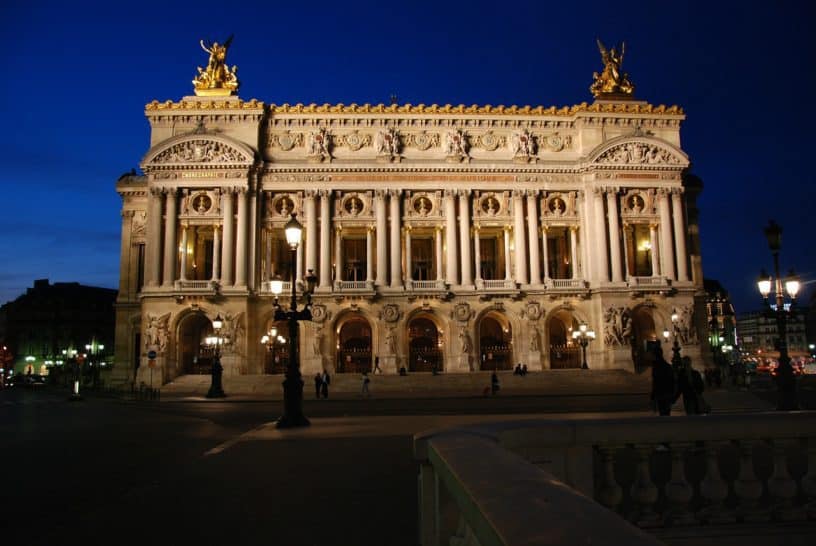 The tumultuous story of the Garnier Opera House

Located in the heart of the French capital, a jewel of architecture proudly stands. One of the most visited buildings in France, a masterpiece that characterizes the whole essence of French art in itself, the grandiose Palais Garnier houses the Paris National Opera.

If the impressive building is now rooted in the 2nd Arrondissement, and has turned into one of the most photographed place in France, it once was a mere project that had to face tremendous challenges.

Dive with me into the tumultuous story of the Garnier Opera House.

A project triggered by an attack

In 1852, when the great Haussmann’s transformations were kicked off in Paris, the city only had one small venue for opera shows. This venue, located on Rue Le Peletier, became the place to be in Paris 19th Century Bourgeois’ nightlife.

At this time, post-revolutionary France was in its Second Empire period, under the ruling of Napoleon III. He had very well understood that being seen at the Opera weekly allowed him to be part of the French everyday life – which was crucial since the concept of Empire was often welcomed with skepticism and that he needed to have it accepted.

In January of the year 1858, Napoleon III was the target of a bomb attack, right in front of the Opera of Rue Le Peletier. At the time, even though Haussmann had started his transformations, most Paris streets were still narrow, muddy, dark and unsafe. 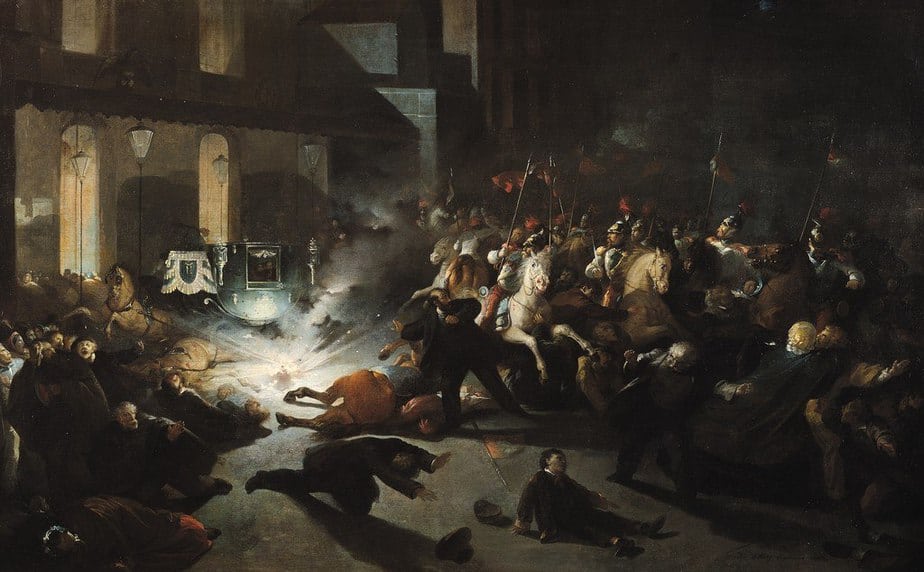 As a result, Napoleon III, who escaped the attack, decided it was time for Paris to have an Opera House worthy of the Empire’s grandeur, and much better connected to the imperial palace (the Louvre and Tuileries complex) than the small venue of Rue Le Peletier.

The project of an Opera House right near the Louvre, and of the avenue leading to it, was then born.

From a contest to a closely supervised project

The Opera House project was one of the first of its time to be launched as an architecture contest (and not directly handed to an Emperor-approved architect). The contest was extremely successful with more than 171 candidacies received in 1860.

The project number 38, named “I aspire to much, I expect little” won unanimously. The project was carried by an architect unknown at this time: young Charles Garnier. 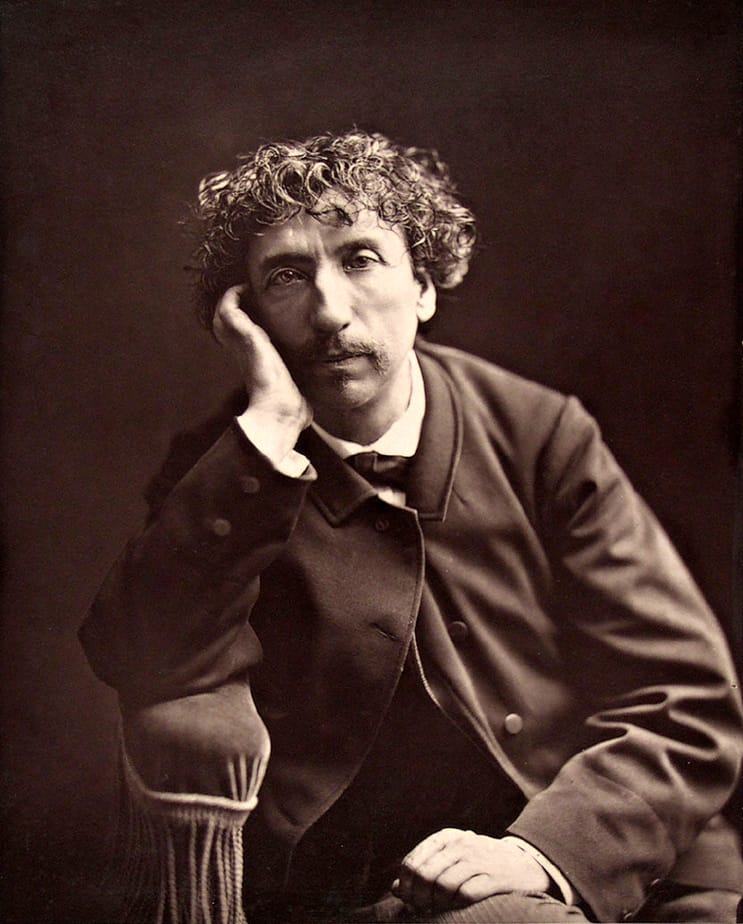 Due to the expectations and to the fact that the new Opera House would have to fit in the newly designed Haussmannian Paris, the construction would be closely overseen by the Emperor himself, and by Haussmann.

The specification of the new Opera House was rather strict.

First of all, the lot to build it was imposed by Haussmann and extremely unpractical. If you look at a map, the lot has not changed since this time, and you can clearly see that the Opera sits on a diamond-shaped piece of land – which was quite difficult to use since the main façade had to be facing the south tip of the diamond, in order to face the Louvre.

It was also required that the new building had three distinct entrances: one for the Emperor and his family, one for the Opera’s main subscribers, and one for the general public.

At last, the project was given a deadline: the Opera should have to be completed by 1867, the year when Paris was to organize a World Expo during which it well intended on showing that the city was better than London, its great rival.

Charles Garnier had a project that very well suited the imposed specification.

He first decided to create a main building shaped as a rectangle, with the main façade facing south, slightly wider than the new Avenue de l’Opéra. The main façade would be the general public entrance. If you have been visiting Paris for a while, you may note some similarities between the main façade of Palais Garnier and the Louvre Grand Colonnade (East façade). Indeed, Garnier modelled the double columns system of his Opera on the Louvre architecture. 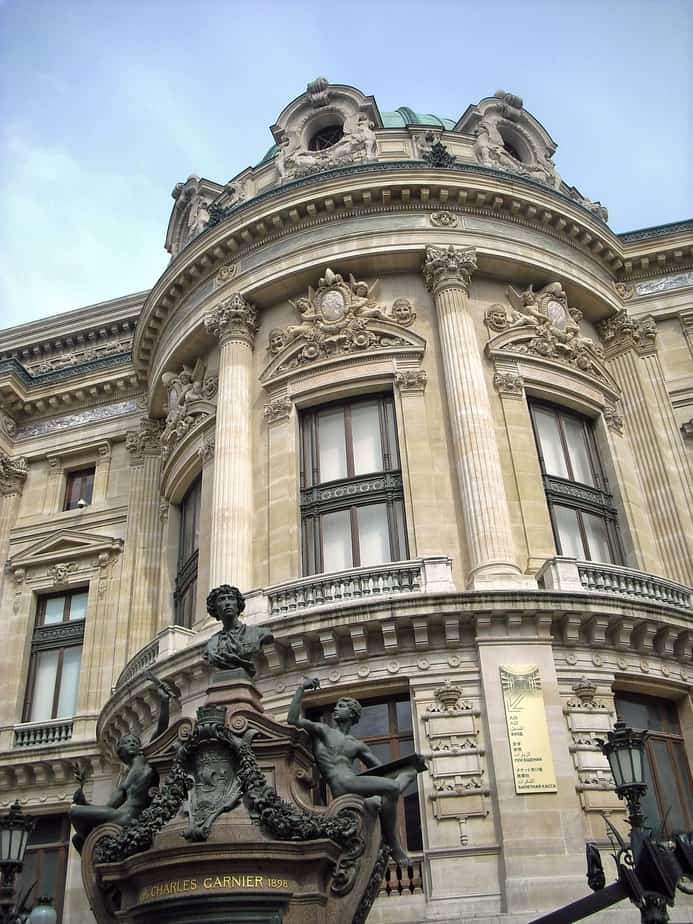 The Emperor’s Pavilion is the only element that breaks the symmetry of the structure, with a carriage ramp – Source : Pixabay.com – CC0

While Garnier started the construction, Haussmann began piercing Avenue de l’Opéra. To Garnier’s surprise, Haussmann allowed architects to surpass the height limitation for the avenue’s buildings by more than 5 meters. This was disastrous to Garnier’s project since it would make his already-enclosed Opera even smaller and more ridiculous. To prevent that from happening, Garnier had to raise the attic – which is the part located above the façade colonnade – by more than 5 meters, in a hurry.

Interestingly enough, Avenue de l’Opéra is the only street planned by Haussmann which serves no purpose related to traffic or people flow. It is only decorative and monumental. It is only drawn here to connect the Opera House to the Louvre in the shortest possible way, all the while rendering an impressive vision of Garnier’s work.

The main building was designed to show exactly the different parts of it from the outside. Four sections are clearly visible – corresponding to four distinct architectural styles : the circulation part, the auditorium, the stage area and the offices. 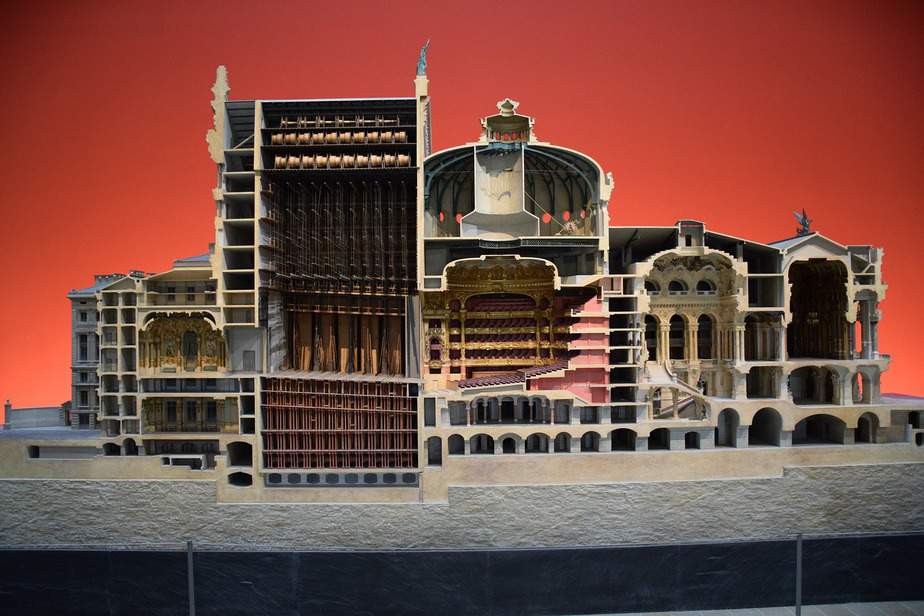 This cross-section model clearly shows the 4 sections of the building – Source : Pixabay.com CC0

The Southernmost area was to be the circulation part of the building. If these were usually the less decorated parts of an Opera House, Garnier did the exact opposite here. Visitors enter the building via a low-ceiling vestibule leading to the architectural masterpiece of the building: the great staircase. Designed like a palace patio with its interior windows and balconies, the grandiose staircase is conceived to divide the flow of spectators directly towards their respective seats. 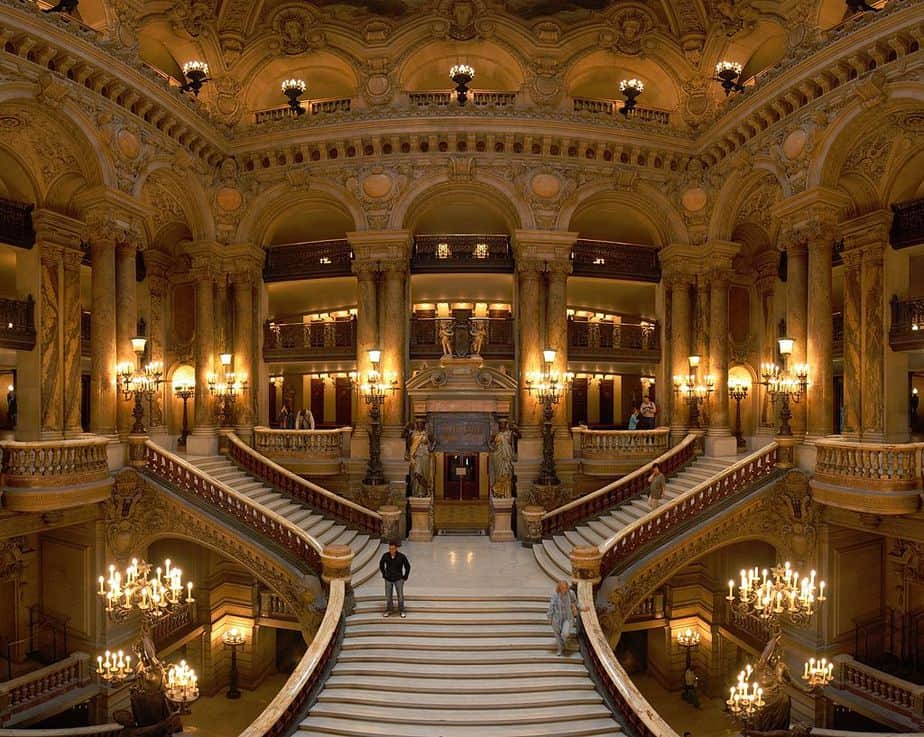 The vestibule is also topped with a Foyer for spectators to have a break during the intermissions. The Foyer is inspired from Versailles’s Gallery of Mirrors. 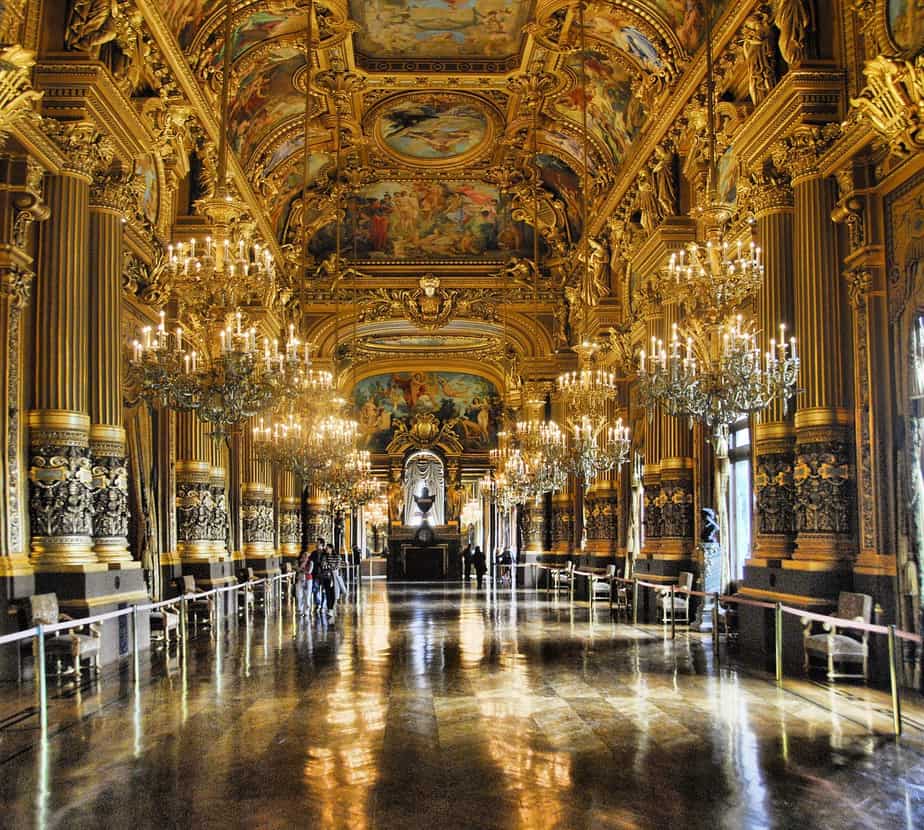 The main auditorium is decorated like an Italian theater. However, its structure is extremely modern for the time. The supporting beams and pillars are actually made of iron, even if they are decorated to give a wooden classic aspect. This makes the room much lighter and fireproof than the traditional wooden structures.

The grand chandelier is known worldwide since a memorable scene in Gaston Leroux’s Phantom of the Opera scene shows it falling onto the audience. The event never occurred for real, but was probably inspired by the fall of a detached counter-weight which fell onto the crowd, killing two. 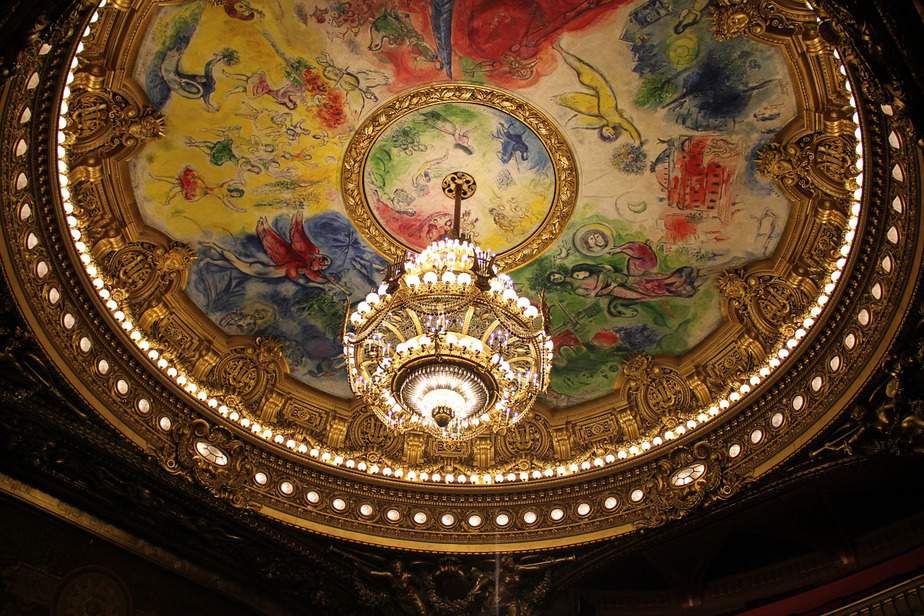 The Auditorium Ceiling by Chagall and the Grand Chandelier – Source : Pixabay.com CC0

The stage area, is the most impressive part from the outside. It overlooks Paris by 56 meters and is highly recognizable with its inclined rooftop and disruptive abrupt look. The stage was one of the largest in Europe. The technical facilities, above and below, are big to allow the sets to fit without having to be folded or dismantled.

While digging the required space below the stage, Garnier found a groundwater table. This piece of water would have seriously endangered the stability and resistance of the structure. To prevent water from entering the building with its own pressure, Garnier built a concrete tank in the underground and filled it with water. The pressure of the tank water would prevent the soil water to enter the rest of the building. This tank fed Leroux’s imagination leading to the legend of the underground lake under the Opera. If the lake was never a reality, the tank is essential to the building. It is also used for firefighter’s underwater training, being the only piece of water in Paris which doesn’t allow divers to get air at the surface.

At last, the back area of the building is reserved for administrative and technical offices. A dancers’ foyer, located right behind the stage would allow for the stage to be extended if need be. When the Opera opened, the foyer quickly became a hidden place for sexual favors, rich men being allowed to enter it to pick the dancer of their choice… The fake ceiling even hides an overlooking corridor for voyeurs…

However, the main purpose – to have an impressive Opera to display to impress London – was achieved.

In 1870, the war against Prussia lead to a full interruption of the construction. The war was lost and the Empire lost the People’s favors and fell. Every symbol of the Imperial Power became hated, damaged if not destroyed.

The Opera was saved because its vacant interior was then used to store food during the war. However, many deterioration occurred on the outside.

At the end of the war, the Opera House construction site was left unfinished.

In 1873 the old Opera on Rue Le Peletier was completely destroyed by fire, leaving Parisians with no Opera at all.

The construction of Garnier’s imperial Opera was then required to resume, despite the unappreciated symbolism of it. The inside of the building had to be finished in the quickest way possible, so that Paris could finally have an Opera House to be proud of.

It took another two years to finish what is now known as Palais Garnier. The building is impressive, unique and definitely considered today as one of the most beautiful buildings in the world.

It was finally inaugurated in 1875. The whole thing happened in such a hurry that they even forgot to invite Charles Garnier! Skepticism and doubts related to the imperial nature of the project quickly vanished when the first spectators walked the grandiose steps of the Great Staircase. 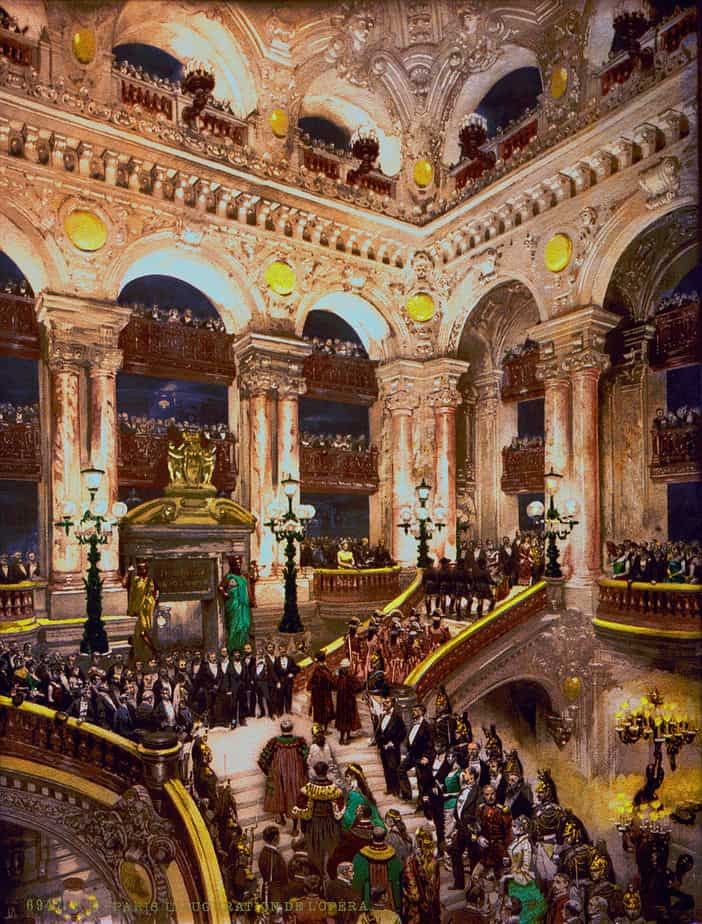 Now a jewel in Paris landscape, the 150 year-old Opera House has lived through three wars, hundreds of tales and legends, and millions of visitors. Yet, it is still today one of the most prestigious stages to perform on when you are an Opera singer or ballet dancer. The extreme rigueur of Paris National Opera, the standards set to be in line with the perfect setting, and the long-gained fame of the artists who got acclaimed there, contributed to this success.

Today, you may still buy tickets to see performances in the great Italian style auditorium, even though sold-out performances are quite common.

You may always book a guided tour of the venue, or participate in one of the many activities offered by its administration year round to help younger generations to appreciate opera. Last year, for instance, you could book a seventy-five minute escape game to visit the building in an original way!

For a guided tour of the building, you should plan for a duration of approximately 90 minutes. You should book your tour in advance. Visits are available in several languages and cost 17€ for the adult fee. Be aware that depending on the day and time of your visit you may not be allowed to see the auditorium since it may be locked during rehearsals or performances.

At last, DiscoverWalks offers guided tours of Paris Right Bank’s main landmarks. The Garnier Opera House is one of them, of course. Book your tour now and learn even more things about Garnier’s masterpiece!