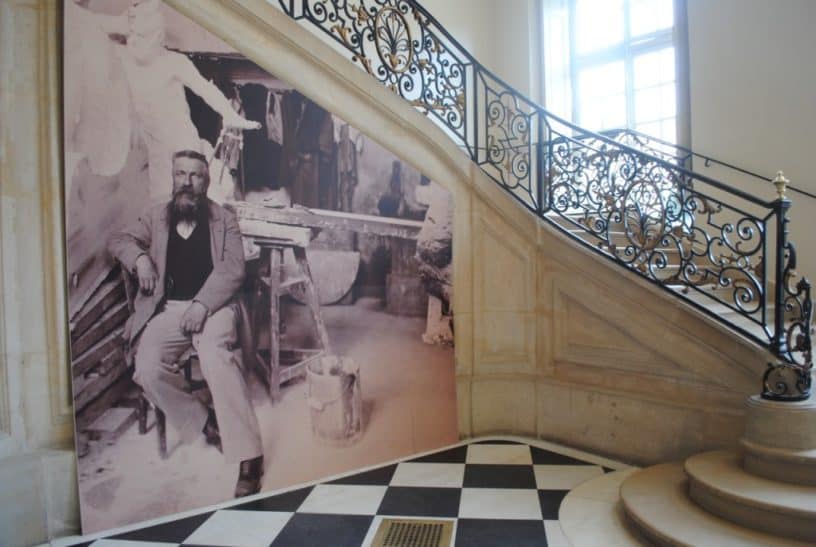 If you know anything about sculpture, you know that Auguste Rodin is a bit of a legend. Rodin was born in Paris in 1840, and reached his fame as an artist when he was in his 40s, which in of itself is rare. 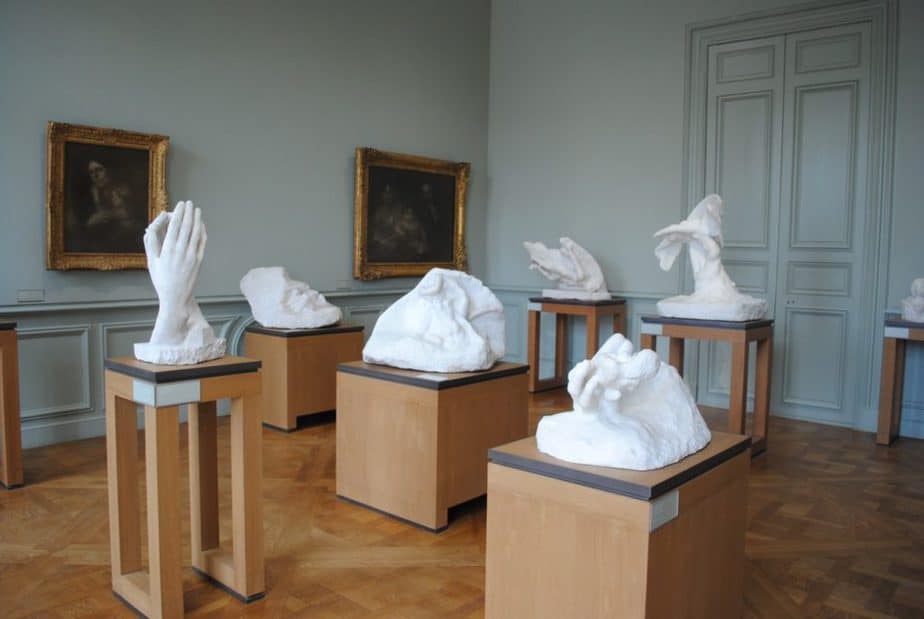 Rodin is best known for his sculptures made of bronze and marble, and they’re accuracy in terms of shape and form of the human body. He happens to be one of my favorite sculptors of all time, as many of his pieces are centered around romance and human relationships.

Not only was Rodin extremely talented, he lived a pretty amazing life, and has an entire museum dedicated to his work smack dab in the center of Paris! Keep reading for some background on Rodin, and what you can do when you check out the Rodin Museum in Paris!

Before I jump into what you can do at the Rodin Museum, I’d love to give you all a bit of information on the life of Auguste Rodin! 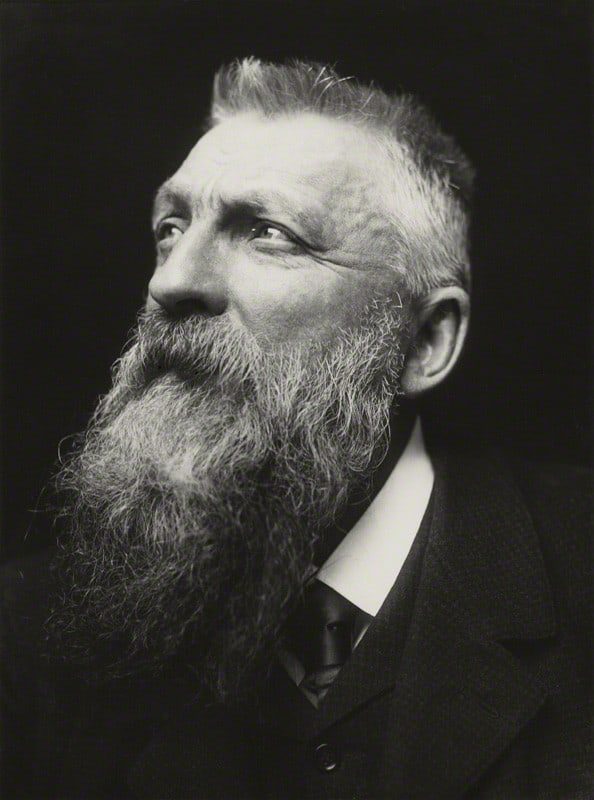 As I mentioned, Rodin was born in Paris, and lived there for most of his life. Rodin had always had an interest in art, and applied to the major art school in Paris, the École des Beaux-Arts (side-note: if you are in Paris and get the opportunity, I definitely recommend taking a walk by the school as it is a gorgeous building!). Rodin was rejected 3 times after failing the entrance exam. 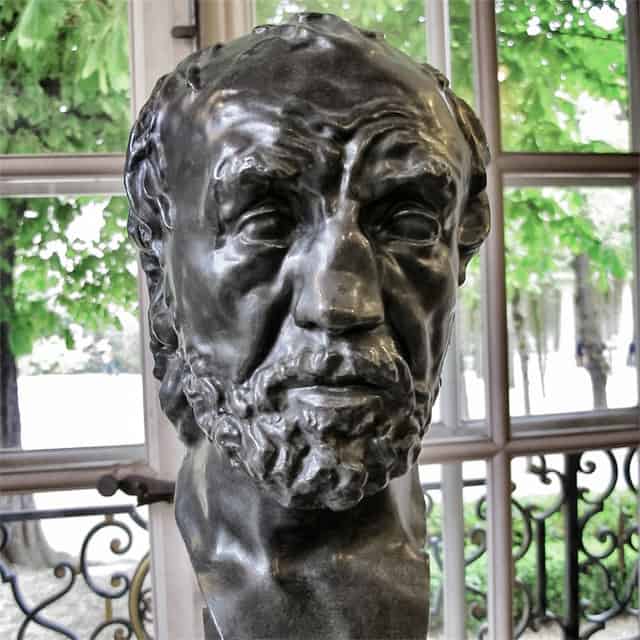 The Man with the Broken Nose, Rodin Museum, Paris by Monica Arellano-Ongpin – Flickr

After a few years of working in Brussels, Rodin found himself bored and lacking inspiration. He decides to do some traveling throughout Italy, and after seeing the masterpieces of Michelangelo and Donatello, Rodin finally found what he was looking for.

After returning to Brussels, Rodin got quickly to work on one of his first original piece, The Age of Bronze (originally called The Vanquished). This sculpture was finally accepted and appreciated at the Salon in Paris in 1877, where Rodin received accolades for his work. The sculpture resembled the human form so accurately, that Rodin was even accused of using an actual woman body to make the old for the sculpture! Talk about talent!

The next major moment in Rodin’s life came when he as commissioned by the not yet built Musée des Arts Décoratifs in Paris to construct a bronze door. The door would prove to become Rodin’s life work, as although it was to be finished by 1884, when Rodin passed away in 1917 it was still unfinished. The motifs on the door stem from Dante’s Divine Comedy. Rodin’s work on the door also inspired one of his other most famous works, The Thinker. 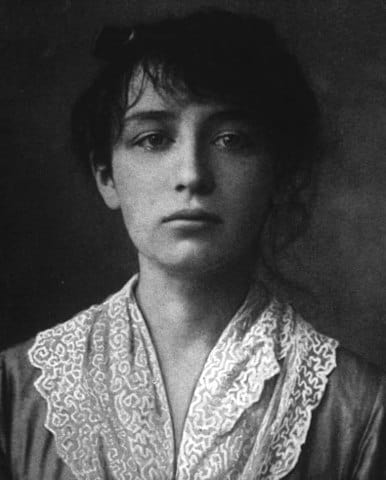 As Rodin’s career began to pick up, his personal life began to become more complicated. In 1885, he began an affair with one of his students, a certain Camille Claudel. Claudel would prove herself to be an extremely talented artist in her own right, and some of her works are also featured in the museum. Rodin’s masterpiece The Kiss was inspired by his deep and sensual feelings for Claudel.

For the remainder of his life, Rodin dedicated all of his time and efforts to his art. He was commissioned to erect statues in honor of famous French citizens like Honoré de Balzac and Victor Hugo. When Rodin died in 1917, he left his life collection to the French state, which brings me back to the Rodin Museum in Paris!

What to do inside the Rodin Museum and gardens 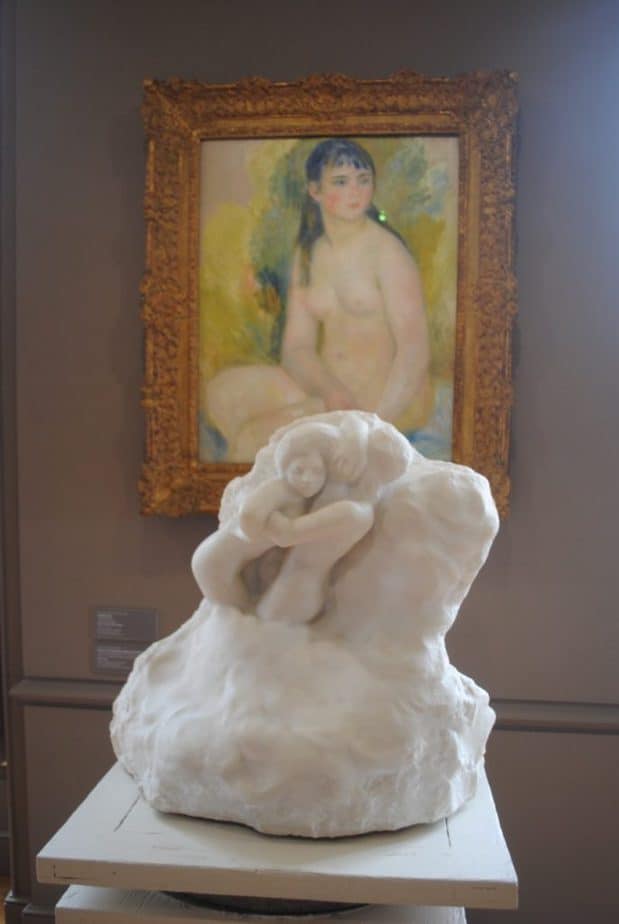 Paolo and Francesca in the clouds by Auguste Rodin – Rodin Museum, Paris by Molli McConnell

The Rodin Museum is located in the stunning Hôtel Biron in the 7th arrondissement in Paris, just around the corner from Invalides. The Hôtel’s relationship with the art world began back in1904, when the French State (it’s owner) decided to rent out the space to aspiring artists. Heavyweights such as Jean Cocteau, Henri Matisse and, of course, Rodin all called the hôtel home at one point in their careers!

In 1911, Rodin was the sole resident of the hôtel, and it was around this time that he decided to donate his life’s creations to the State after his death. Fast forward to 1919, and the Hôtel opened it’s doors as the Rodin Museum!

In French, Hôtel can be used as another word to describe a mansion, and believe me, this is definitely a mansion! If you’re like me, as soon as you walk into the museum, you will be swept away not only by the beauty of the art inside, but of the building itself. Decorated in blue, black, white, and hardwood, the interior design of museum feeds off of the simplicity of Rodin’s works, rather than taking away from it. 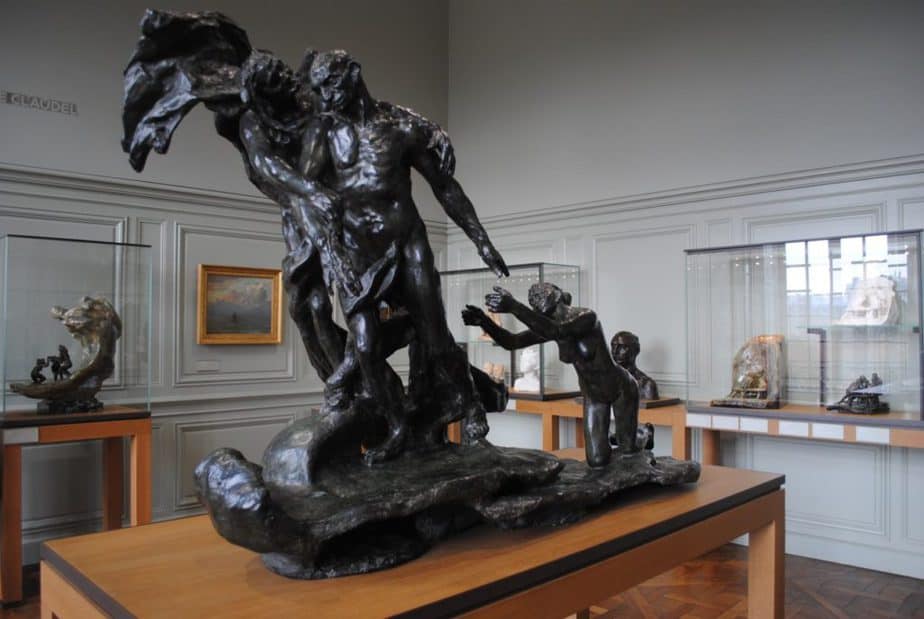 Some works that you shouldn’t miss are:

The latter two can be found in the gardens of the museum, which are also a site to be held. 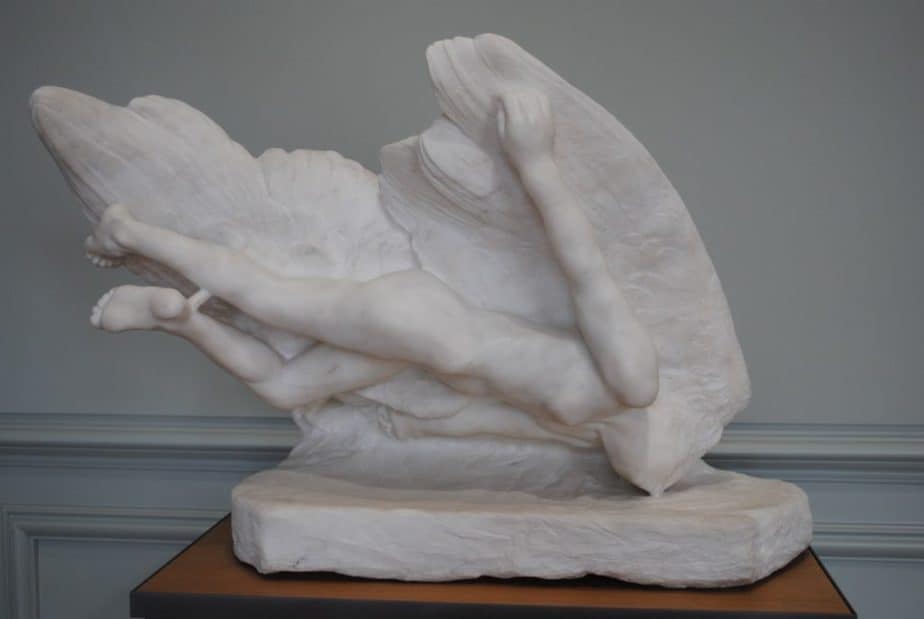 Something I especially love about the Rodin Museum gardens is that you get the feeling that you’ve been transported outside of Paris, to somewhere calm and secluded in the French countryside. I can totally see why artists once wanted to live here, and why Rodin chose to live out his last days at the Hôtel Biron. 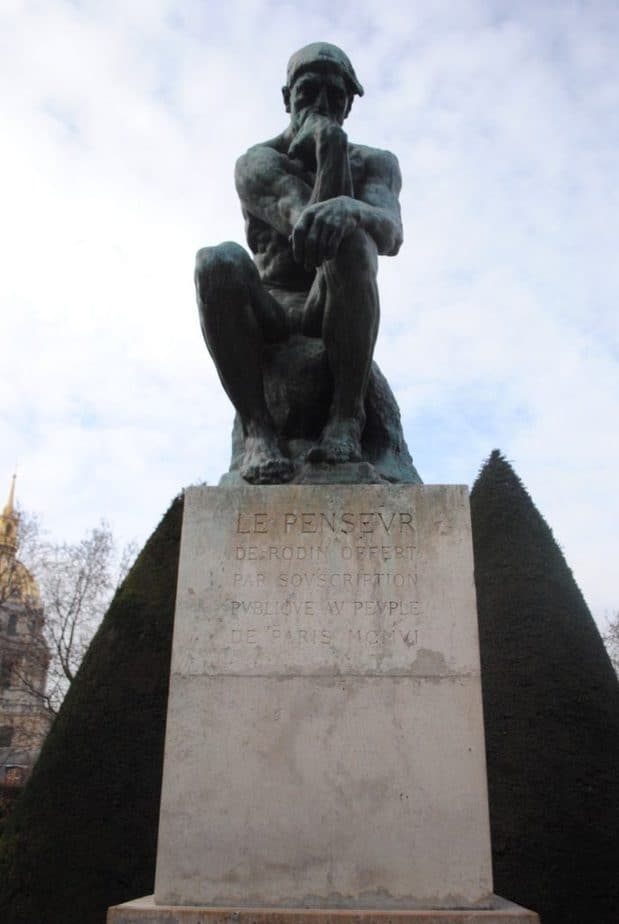 Don’t miss an exact replica of a room in which Rodin would have spent time in, as it would have been in the early 20th century. The minute you step into this room, imagine Rodin sitting there with you. What would you ask him?! 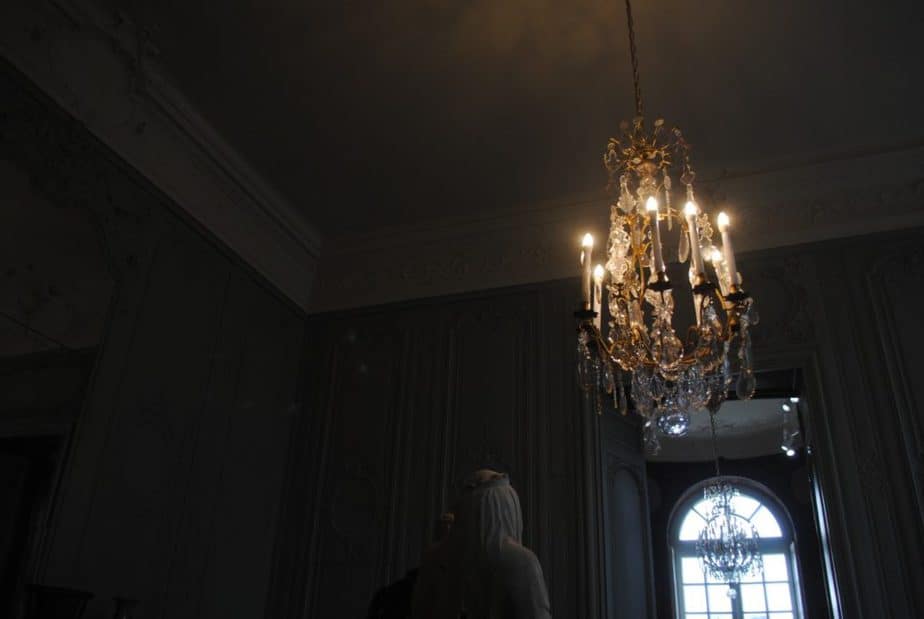 Finally, the museum also features works from Rodin’s personal collection from artists like Monet, Van Gogh, and Edvard Munch. It should come as no surprise that Rodin had an appreciation of fine art.

All in all, you won’t regret an afternoon spent in the Rodin Museum in Paris. Use this article as a guideline on what to keep an eye out for, and don’t forget to take some pictures for yourselves!

If you’re interested in learning even more about Paris and it’s artists, why not come on a walking tour with us?! Click here, and I promise you won’t regret that either!