History of the Louvre Palace: Before the Art

History of the Louvre Palace: Before the Art

If you’re like one of the more than 8 million tourists to visit the Louvre museum in Paris per year, it’s safe to say that you’re an art and history lover! I know that when I first arrived in this city 7 years ago, it was one of the first museums I checked out.

You can find masterpieces such as the Mona Lisa, the Venus de Milo, the Winged Victory of Samothrace, Liberty Leading the People, and Psyche Revived by Cupid’s Kiss…just to name a few! The museum can seem a bit overwhelming at first, but I suggest you strap on your finest walking shoes and spend at least a few hours exploring. 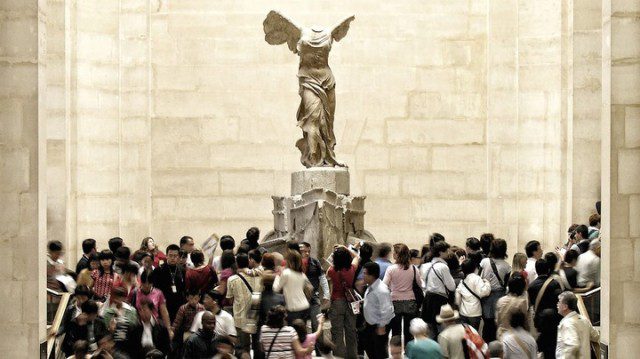 The Louvre we know and love today is a must-see for most tourists that come to visit this beautiful city. That being said, construction of the Louvre started in 1202, so you can guess that it wasn’t always home to the thousands of beautiful pieces of art and artefacts it holds today! So, just what was the structure before it became one of the most famous museums in the world? 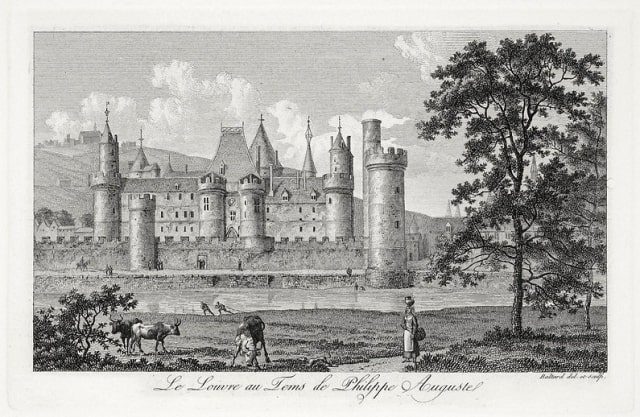 The Louvre during Philippe-Auguste’s reign – WikiCommons

In the early 13th century, French king Philippe-Auguste recognized the need to protect his capital city of Paris from outside forces. With a wall already constructed around the city, the fortress he built was an extra precaution.

The Louvre becomes a Palace 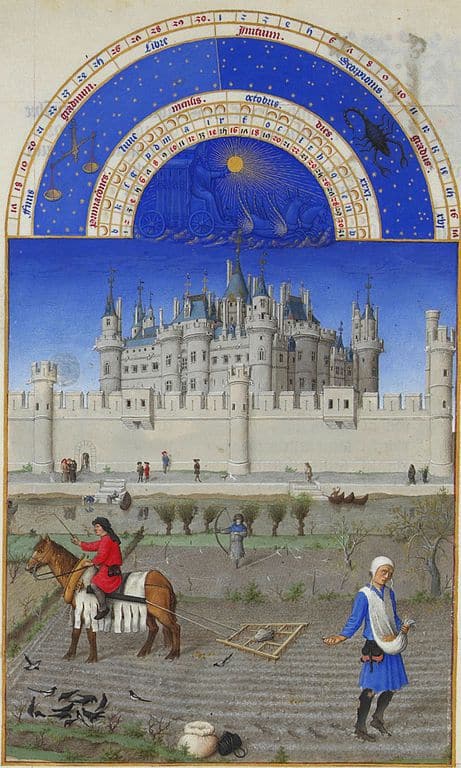 It was king Charles V who first endeavoured to transform the fortress into a royal residence. Between 1364 and 1380, the king, his architects and his builders converted the military complex into a series of apartments, salons, and a massive library whose works would eventually evolve into the National Library of France.

Unfortunately for king Charles V, the Hundred Years War began and the nobles no longer felt safe in Paris. The court moved to the suburbs of Paris, and set up house in the Chateau de Fontainebleau.

Flash forward a few hundred years, and enter King François I. The king wanted to move back into Paris, but decided that the palace that king Charles V began wasn’t up to par with his standards of living. He order the original Louvre palace to be destroyed, and the reconstruction that began at this time resembles the Louvre that we recognize in our days!

Side note: it was king François I that brought Leonardo Da Vinci to France (where he spent his last days), and it is in this way that France came into possession of the Mona Lisa! Thats right, the Louvre’s incredible collection began all the way back to the 16th century. 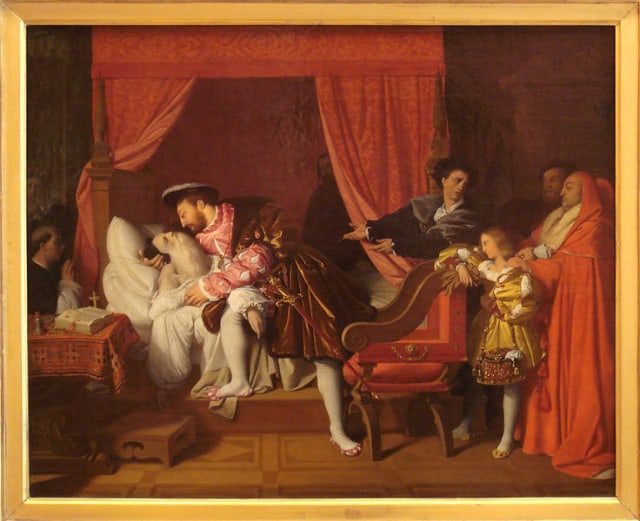 King François I ruled during the height of the Renaissance, and his plans for the castle reflected this style. After his death, the king’s son, King Henri II continued to renovate and add onto the castle that his father began. The queen of France, Catherine de Medici (who came from a famous Italian family known for its support and patronage to the arts), added onto the design with her idea for the construction of the Tuileries Palace.

Next up is King Henri IV, who removed older parts of the palace that remained from the fortress, and added on wings that connected the Louvre Palace with the Tuileries Palace, called the Grand Galerie. With these additions, the Palace quickly became one of the longest in the world. 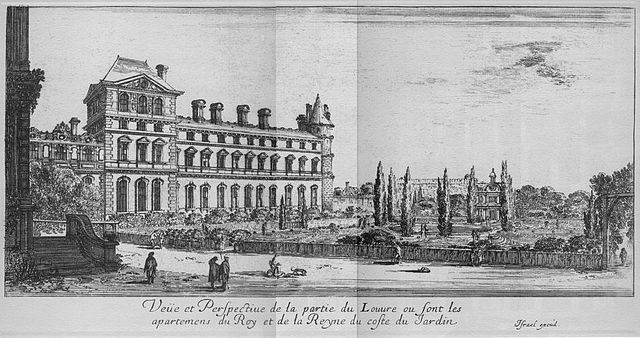 The Louvre in 1650 by Israel Silvestre – WikiCommons

King Louis XIII continued to expand the Palace in the 17th century, and made way for his son, king Louis XIV, who completed to add onto and change the Palace. The galleries that Louis XIV constructed housed his impressive art collection, and remain as they were, today. 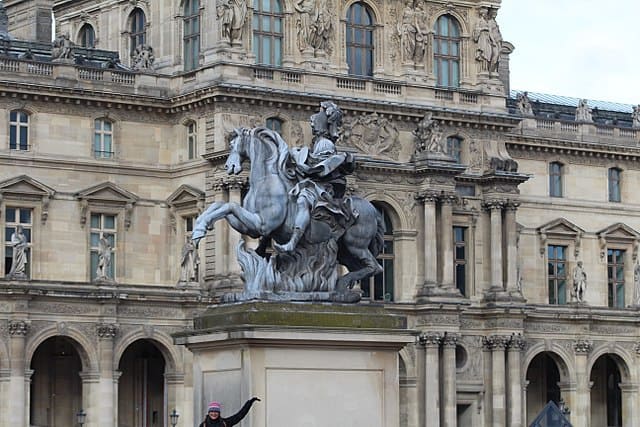 Louis XIV, known as the Sun King, lived in the Palace for years, before he decided to move the court to the Chateau de Versailles. The nobility lived in Versailles until the French Revolution, and I’m sure that quite a few of you know how that story ends!

While the king and his court were making things happen in Versailles, intellectuals and artists who were living back in Paris at the Louvre Palace suggested that the French court create a museum dedicated to the king in the Louvre. This was just the beginning of the creation of the Louvre museum!

The museum began with a very small collection of the king’s most prized artworks, and was opened to a select few from the public on certain days of the week. The museum was not finished and completely open to the public until 1793, under the reign of King Louis XVI.

Between the French Revolution and the reign of Napoleon I, the Arc de Triomphe du Carrousel was built in order to celebrate his military victories. 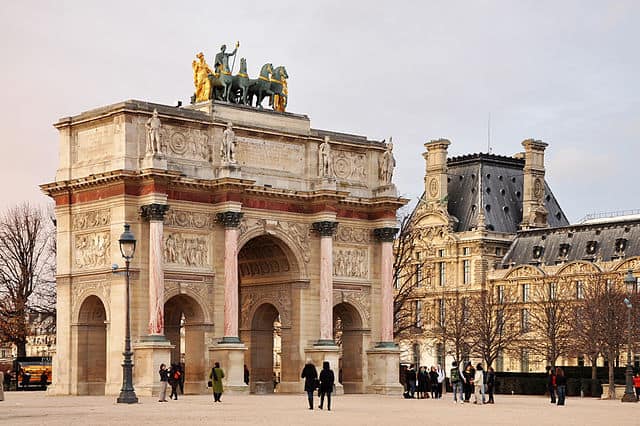 He then removed older portions of the original palace to make way for larger and more streamlined wings such as the Richelieu and Denon Wings. The Denon Wing is named after its first director of the museum, Dominique Vivant Denon. 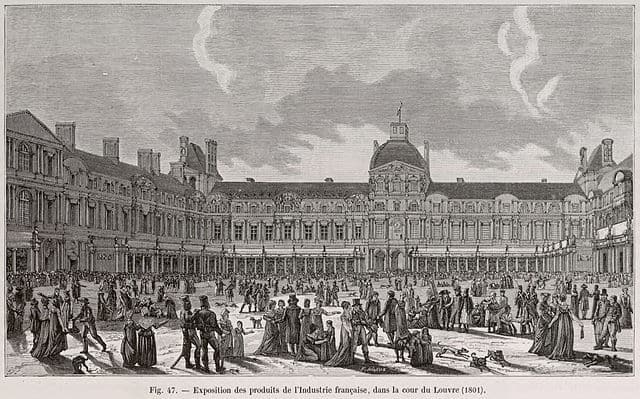 The Louvre in 1801 by Hoffbauer – WikiCommons 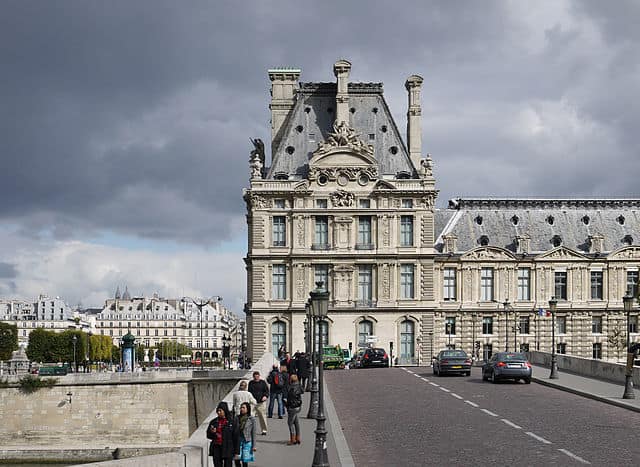 Construction on the Louvre continued throughout the 20th century through the direction of President François Mitterrand. President Mitterrand removed the offices of a division of the government from within the museum, which freed up more space to display art. Mitterrand is also responsible for commissioning the infamous glass pyramid located in front of the museum. Architect I. M. Pei designed the pyramid, and although it was rejected by Parisians when it was first erected, the structure is now loved and cherished as a part of the Louvre’s architecture. 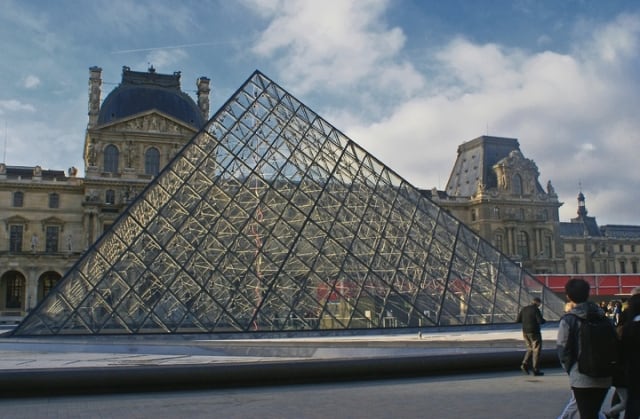 Like most things in Paris, the Louvre museum’s origins can be dated back hundreds of years.

The museum was once a fortress, then a palace, and now is the perfect way to spend an afternoon in Paris!

What’s your favorite thing to see in the Louvre? How many hours can you spend inside?! Let me know what you think in the comments below, and if you haven’t made it to the Louvre yet…get to it!