Beneath Paris: Half the City is Underground 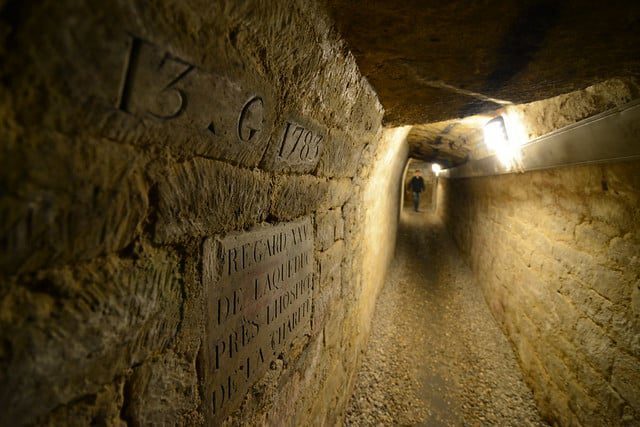 Beneath Paris: Half the City is Underground

Have you ever wondered what’s beneath those beautiful Parisian streets you’ve been wandering?

It’s something I never really thought about personally, until I started hearing stories about the Catacombs. Then I saw the movie, As Above, So Below. If you’re into archeology, secret codes and Paris, I definitely recommend it! This film opened up a whole world of questions for me, the main one being: “What is hiding below the streets of Paris?!”

If you’ve ever found yourself wondering the same thing, you’ve come to the right place! Keep reading for to learn more about what you can find beneath Paris.

Practical Information for visiting the Catacombs 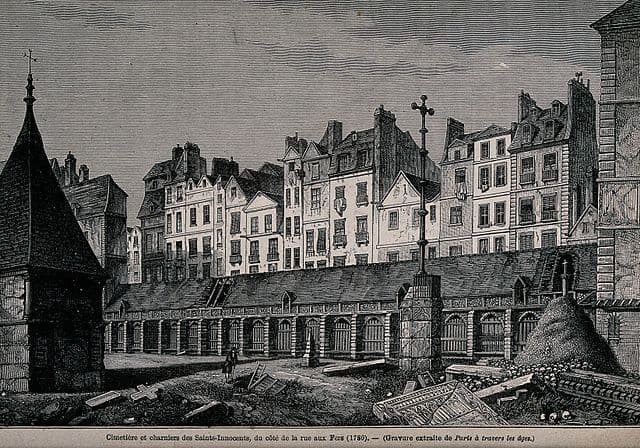 Cemetery of the Innocents in Paris wood engraving – WikiCommons

If you know anything about history, you know that back in the day, things tended to get a little bit gross. Indoor plumbing had yet to be invented, which meant human excrements were thrown in the streets. If there was a death in the family, what did you do? You left the body outside for the city’s cleaners (if there were any) to deal with. This was all especially true in bigger cities like London and Paris.

What did Paris do with all of those bodies lying around? They buried them in the city’s cemeteries, of course! By the 18th century, all of the cemeteries in the city were beginning to get overcrowded. Parisians were coming down with illnesses and diseases that could be linked back to the cemeteries, particularly from the Cemetery of the Innocents. Something needed to be done!

The city of Paris had a bright idea: bury the bodies deeper underground. Enter: the abandoned mines of a city outside of Paris called Montrouge! These abandoned mines formed a system of underground tunnels that extended beneath Paris. Thus began the semi-secret Parisian project to move bodies from those overcrowded cemeteries into the tunnels. 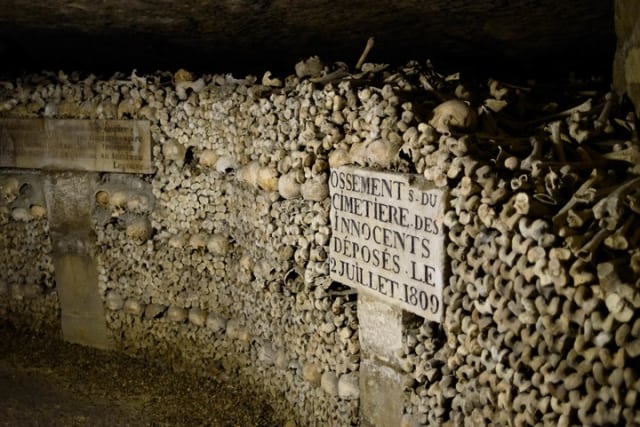 “Bones from the Cemetery of the Innocents. Deposed July 2, 1809” sign within the Catacombs – pxhere

I say semi-secret because the operation occurred at night, to avoid upsetting Parisians, and especially the Catholic Church, who were less than thrilled about the idea of what they considered to be grave desecration.

Despite the backlash from the Church, hundreds of grave transfers occurred from 1785 until 1814, with only a small break occurring during the French Revolution.

In 1840, when Napoleon III and architect Baron Haussmann began the major renovations that would change Paris forever began, the grave transfers picked up again. Napoleon and Haussmann wanted wide, open boulevards, and in order to make space, those old cemeteries had to go.

In 1860, the underground tunnel was renamed the “Paris Municipal Ossuary,” and was soon after called the “Catacombs.” Well before the name change, in 1809, the site was open to the public by appointment only. Before the ossuary opened, however, there was a lot of work to be done to make it safe for visitors. Inspector Héricart de Thury is responsible for this remodel. 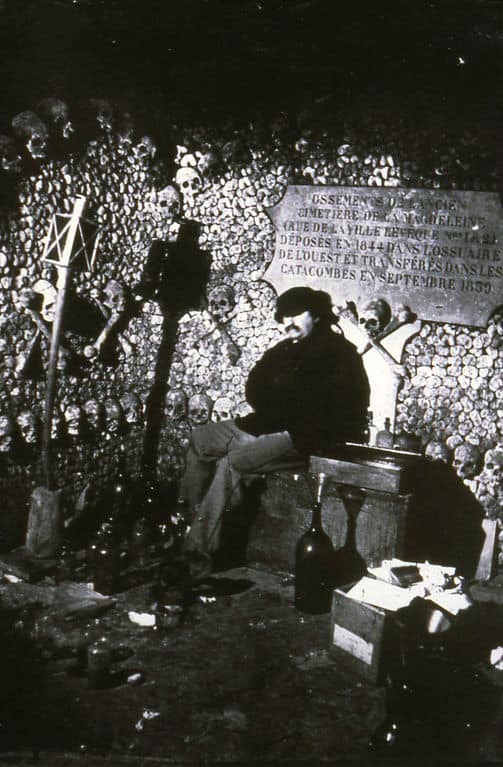 Nadar’s self-portrait in the Catacombs, 1861 by Nadar – WikiCommons

The mythic photographer Nadar was the first to photograph the Catacombs. Nadar was known for his flamboyant personality, and his amazing photography skills. He took portraits of all of the greats, like Charles Baudelaire, Alexandre Dumas, Jules Verne and Émile Zola.

In 1861, Nadar invented a battery operated light, which is considered to be one of the first artificial light sources ever created in the history of photography. Nadar wanted to prove that his device worked, so he decided to attempt to take photos of the darkest corner of Paris, the Catacombs!

Nadar took hundreds of photos, all of which required an eighteen minute exposure due to the somber lighting! If you know anything about photography, you know that’s a really long exposure time. If you don’t know that much about the field, consider this: exposures in broad daylight are usually a fraction of a second long!

The photos were a huge success, as although the Catacombs had been open to the public for yearly visits since 1850, many Parisians had never braved entering the tunnels. Nadar had successfully brought the Catacombs into the public eye.

The underbelly of Paris 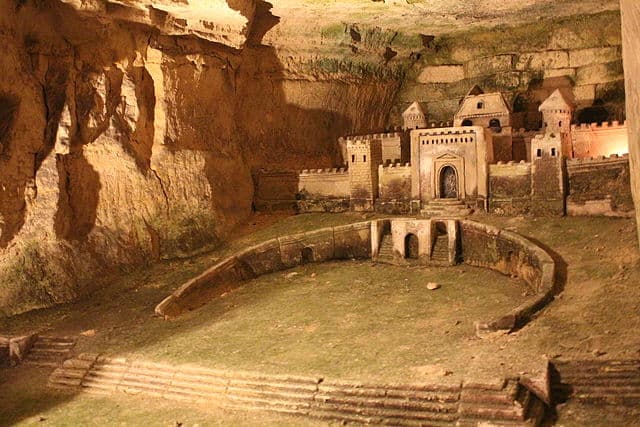 A carved castle beneath Paris by Rijin – WikiCommons

To this day, you can technically cross Paris completely underground. I say technically, as the majority of the tunnels are forbidden from public access. This doesn’t stop many Parisians and tourists alike from delving into the depths of the underbelly of Paris.

I’ve heard stories about massive raves, campers setting up their tents over night, people going missing and never returning and even a cinema being set up in the Catacombs. I take the stories I’ve learned with a grain of salt, but it does seem pretty likely most of them are true. The Catacombs are absolutely massive when taking the forbidden sections into account, so it would be impossible to have police patrolling the entire area at all times. Plus, if I were a police officer, you can bet I would refuse to head underground to bust party goers. Maybe that’s why I shouldn’t be a police officer!

This article should in no way encourage you to explore the forbidden sections beneath Paris. There are reasons it is off limits, after all! The underground tunnels can be really dangerous. There are also so many of them, making it really easy to get lost as well. Not to mention rats, possible poisonous gas, and the-less-than-friendly characters that you may cross on your travels.

That being said, there are groups of people who have made exploring the depths of the underground city their passion. They’re called cataphiles. This group of Parisians tend to be teenagers and adults in their mid-twenties, but there are also the veteran cataphiles who have been exploring the tunnels for years, even decades. 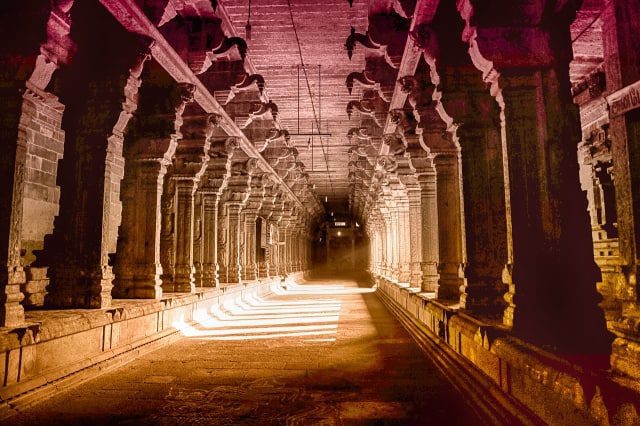 A hidden portion of the Catacombs by TheDigitalArtist- Needpix

Paris’ response to this group, are called cataflics, which translates to “cata-cops.” This is a group of police officers who have in turn made it their mission to find trespassers in the Catacombs. Depending on what the intruders are getting up to, the cataflics them to prison, or simply give them a 65 euro fine.

Some highlights of this underground city? La Plage (The Beach), a large chamber filled with sand, the Salon du Chateau (The Castle Room), a room with an impressive replica of a castle, including gargoyles, and the Salon des Miroirs (The Mirror Room), a cave where the walls are lined with sharps of broken glass. There are large paintings, murals, tables and chairs and even a library where cataphiles leave books for others to take as they like.

Did you know that half of the city is underground? Now you do! I hope you have enjoyed discovering more about this special part of Paris.

Head to the Catacombs (the museum) for yourselves and try to picture how it once was back when Nadar first explored this underground mausoleum! Do you want to explore with one of our expert local guides? We have a Specialty Tour for that! Click here to learn more and book your tour.