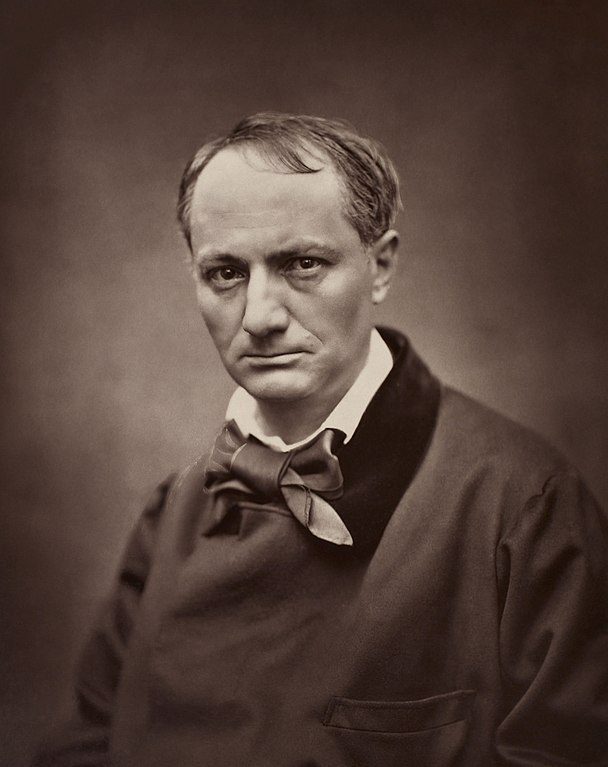 Portrait of Charles Baudelaire, circa 1862 by Étienne Carjat - WikiCommons

As a self-professed bookworm, an amazing part of living in France is getting to soak up all of the literature it has to offer. After struggling to learn the language when I first moved to Paris, the fact that I can now read these literary masterpieces in their original language is a beautiful thing!

Even if you can’t speak French, its hard to deny that the literature that has some out of this country is worth reading. Luckily, most of the greatest works have been translated into many languages, so people around the world can read and appreciate it!

One of my personal favorites is author Charles Baudelaire. Baudelaire was born in Paris and lived most of his life in the capital. Like countless writers and artists, Baudelaire was inspired by the city. So much so, that Baudelaire is considered to be one of the most influential writer of the 19th century. Keep reading to learn more about this literary genius and his life in Paris!

Charles Baudelaire was born in Paris in 1821. Baudelaire’s father was a civil servant who enjoyed painting and writing poetry in his spare time. Although his father sadly died when Baudelaire was just 6 years old, he sites his father’s interests as inspiring him from a young age. 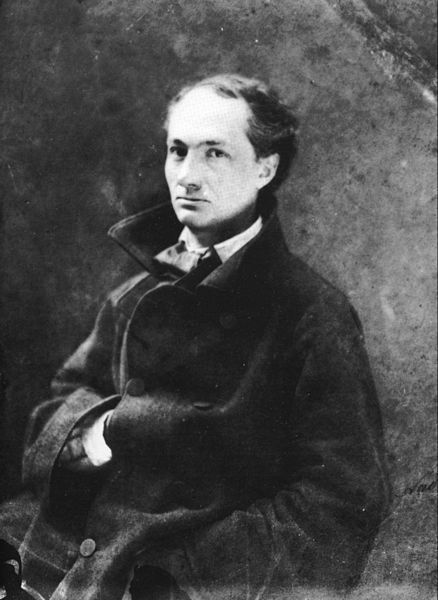 Baudelaire’s mother remarried soon after to a colonel in the French army, who would eventually become a French ambassador. Some biographers have written that this was a traumatising experience for the young Baudelaire, and is something that marked him for the rest of his life.

Baudelaire went to school in Lyon, and then returned to Paris to study law, like many famous French authors did. It was during his adolescence and his time in Lyon that he developed melancholic moods that would haunt him his entire life.

Baudelaire did finish school and get his degree, but decided quickly that he preferred to be a writer. This was to the chagrin of his mother and stepfather, especially when Baudelaire began to run up debts that he expected to be paid by his family.

In attempt to straighten him out, Baudelaire’s stepfather sent him on a trip to India. Baudelaire made a detour without his family’s knowledge and ended up traveling on the islands of Mauritius and Réunion for a few weeks before returning to France. He may not have cleaned up his act, but the trip gave Baudelaire inspiration that he would use in his works later in life.

When Baudelaire returned to Paris, he began to work on his most famous work, a collection of poetry called Les Fleurs du mal. Baudelaire was known for the slow pace that he worked on his writing, so although he began the collection when he was 21 years old, it was completed and published for the first time we he was 36 years old.

Baudelaire first made a name for himself in Paris not with his poetry, but as an art critic! He reviewed the art Salons of 1845 and 1846, and in his second review went beyond critiquing the art, writing a theory of modern painting. Baudelaire was inspired by the painter Eugène Delacroix’s works that he saw at the Salon, who he supported throughout the painters career. Baudelaire went so far as to credit Delacroix in leading the Romanticism artistic movement, aiding Delacroix in becoming a respected painter. 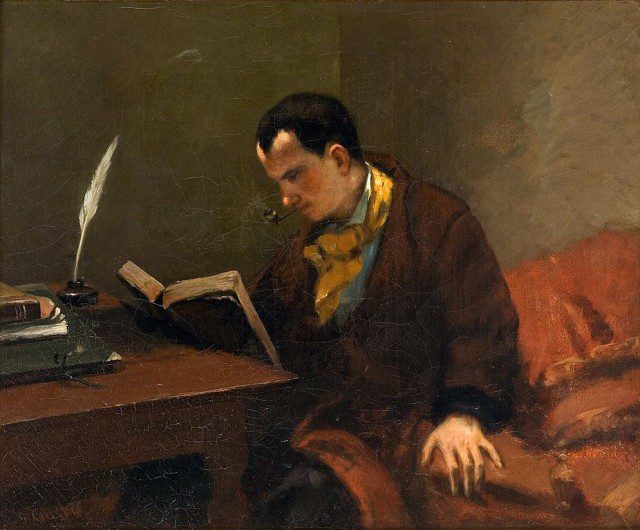 Baudelaire continued living in Paris and working on his poetry, but he was often sidetracked by his drinking, drug abuse, and money problems. He also began a relationship with Jeanne Duval, who would inspire many of his most intense poems. Although the writer lived a troubled life, many biographers say that his hardships inspired his beautiful works.

Baudelaire was a huge supporter of writer Edgar Allen Poe, and took on the task of translating the American’s works to French. Although the two authors never met, Baudelaire felt a connection to Poe. He felt he saw much of himself in the authors work. This should comes as no surprise to those of you who are familiar with Poe’s works, as they are also known for their darkness and themes of death. 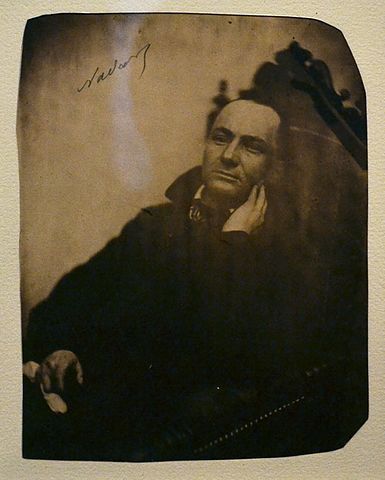 The French poet was inspired by Poe’s daringness in his writing, and he continued to experiment with taboo subjects. With the publication of over of Poe’s works, Baudelaire gained more notoriety and it is thanks to this that he was able to publish his most famous book of poetry, Les Fleurs du mal.

When most people hear the name Charles Baudelaire, the first thing that comes to mind is his most celebrated book of poetry, Les Fleurs du mal, or “The Flowers of Evil” in English. At the time of its publishing, the themes of sex, death, and morality were taboo in the literary world, and was even labeled as obscene by the French government! 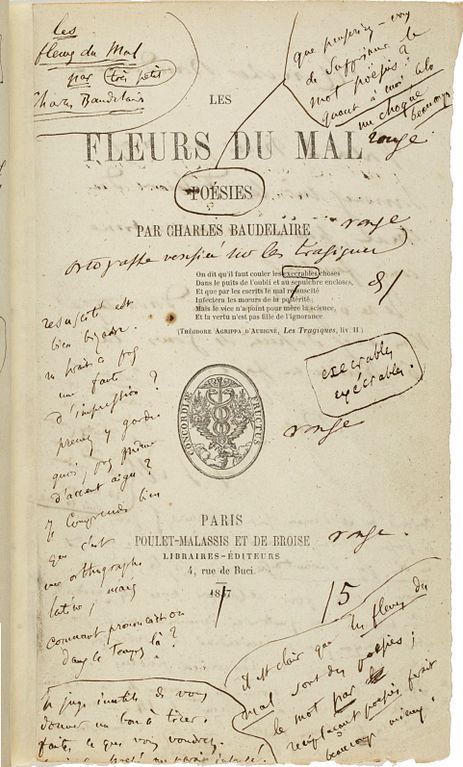 Baudelaire writes on love, sex, death, metamorphosis, and lost innocence, all of which were very shocking for his time. He quickly gained a small following, which included other fellow artists and writers who were impressed with his willingness to touch on topics that were so scandalous.

Baudelaire and his publisher were brought to trial when the French government deemed his works were an attack against morals. As a result, the author was fined and some of his more explicit poems were pulled from the book. It was not until 1949 that the French courts reinstated the oppressed poems back into Les Fleurs du mal.

After the success and obstacles brought on by Les Fleurs du mal, Baudelaire returned to translating and critiquing art and literature. Baudelaire was responsible for translating Thomas De Quincey’s Confessions of an English Opium Eater, and he also wrote reviews on Gustave Flaubert and Honoré de Balzac.

Baudelaire also experimented with prose poetry with his collection called Petits poèmes en prose, which was published after his death. The collection speaks on the suffering that he saw while living in Paris. I know it may be hard to picture now, but Paris in the 19th century was filled with poverty, dirt, and suffering. Baudelaire not only wrote about these conditions, he was living in them. 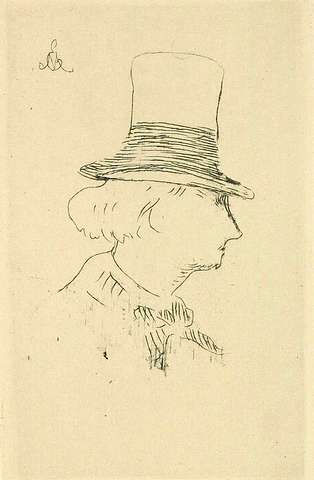 Like many artists, Baudelaire remained widely unrecognized and unappreciated while he was alive. This, plus his irresponsibility with money, caused him to live a life in poverty.Baudelaire spent his last years in hospitals in Brussels and Paris after having a massive stroke in 1866. Sadly, after a life of drug abuse, drinking, and illness, Baudelaire died in Paris in 1867.

Today, Baudelaire is celebrated as linking the literary movements Romanticism and modernism. Fellow artists and writers such as T.S. Eliot, Paul Valéry, and Stéphane Mallarmé credit him as an influence on their works, and Les Fleurs du mal is required reading for French students in most schools.

For those of you lucky enough to take a trip to Paris, I’ve got a few suggestions to help you feel like you’re walking in the footsteps of Baudelaire. 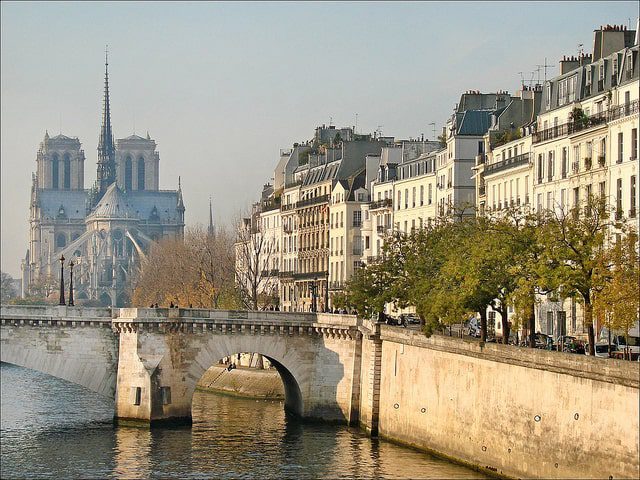 First, take a trip to the Île Saint-Louis in the 4th arrondissement. Not only is this island one of my favorite places for taking a stroll, it is home to the Hôtel de Lauzon, where Baudelaire did most of his work. In 1843, he rented the upstairs apartments of the hotel so that he would have a quiet place to concentrate on his writing. Not only did he use the apartments to write, it is here that Baudelaire founded the Club des Hashischins (Hash-eaters club), a society dedicated to exploring the use of drugs in writing. It may not have been the best idea for his health, but it definitely produced some memorable pieces of writing that we can now all appreciate.

Next stop? An English bookstore where you can buy some of Baudelaire’s corpus for yourselves! I’m sure most of you have heard of Shakespeare and Company when it comes to where to find a good selection of English books in Paris. This shop is definitely on my list of recommendations of where to go in the city, but my personal favorite is a lesser known shop called San Francisco Books Company in the 6th arrondissement. They specialize in used books, so you may be lucky enough to find a rare edition of Les Fleurs du mal, or another one of his titles!

After you’ve found some reading material, there’s only one thing left to do…head to a cafe to start reading! San Francisco Book Company is located in the Odeon area of Paris. Located not far from the shop is the café Le Hibou, which is known for their large outdoor patio. Its the perfect place for people watching and burying your nose in your latest literary find. It can be a bit on the expensive side, but the location makes it worth it!

Misunderstood in his time, and celebrated in ours, there’s no arguing that Charles Baudelaire’s works are worth praising. Baudelaire earned the respect of his peers, and his poetry inspired hundreds who came after him.

The next step after reading this article? Add Les Fleurs du mal to your reading list to enter into the world of Baudelaire, and if you’re in Paris, head to the Montparnasse Cemetery to pay your respects to Mr. Baudelaire yourself!