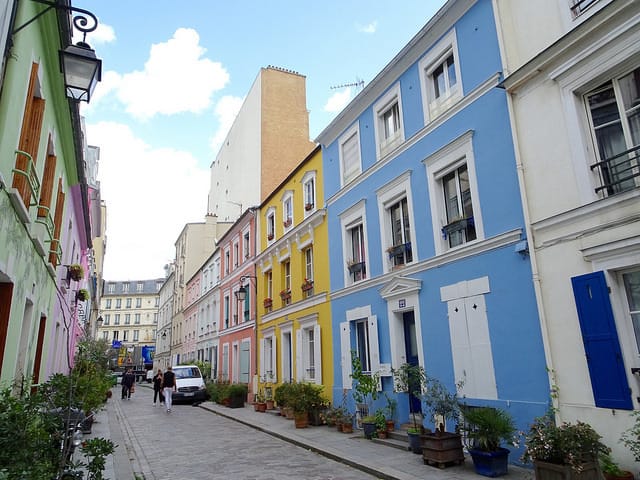 The London vs Paris debate has been long standing. With what surely stemmed from the hundreds of years that England and France were at odds, these two cities seem to have always been in competition.

In my opinion, both metropolitan cities are worth a visit. There are differences and similarities, and each city definitely has its own personality.

There are some that have made the choice between London and Paris, but I’m here to tell you that you don’t need to! There happens to be a street in Paris that oddly resembles one in London. 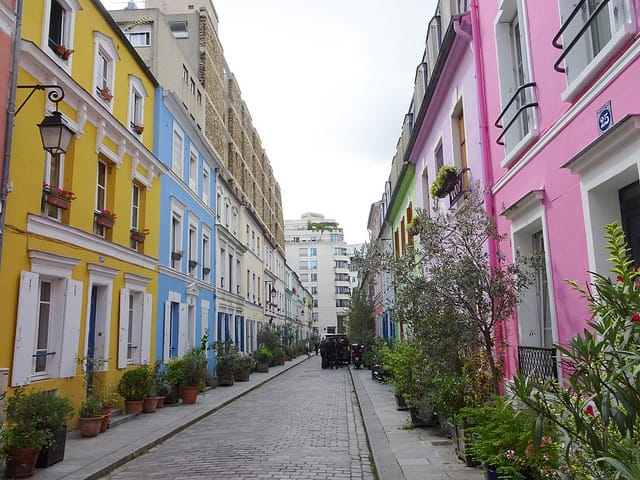 If you’ve been lucky enough to visit either city, or both, you may have noticed that two streets seem to mirror each other. I’m talking about rue Crémieux in Paris, and Portobello Road in London.

Brightly painted buildings that seem to have been built on top of each other line both of the streets. Paris’ rue Crémieux is much more residential than the bustling market street that is Portobello Road, but there is no arguing that the colors and the architectural styles echo one another!

Keep reading to learn a bit more history about these two locales, and why you should pay the rue Crémieux in Paris a visit! 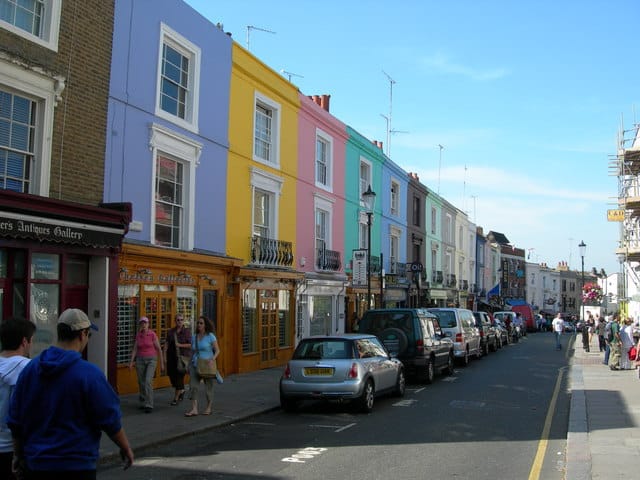 Portobello Road is located in Notting Hill, a neighborhood in western London. The street is famous for its colorful architecture, it’s Saturday market, it’s vintage stores, and antiques.

The road began as nothing more than a path that led from the Kensington Gravel Pits to the Portobello Farm in Kensall Green. The farm was built in 1740, and got its name from a battle during the War of Jenkins’ Ear. British Admiral Edward Vernon successfully captured the Spanish ruled town of Puerto Bello in today’s Panama, and the farm was named to celebrate this victory! 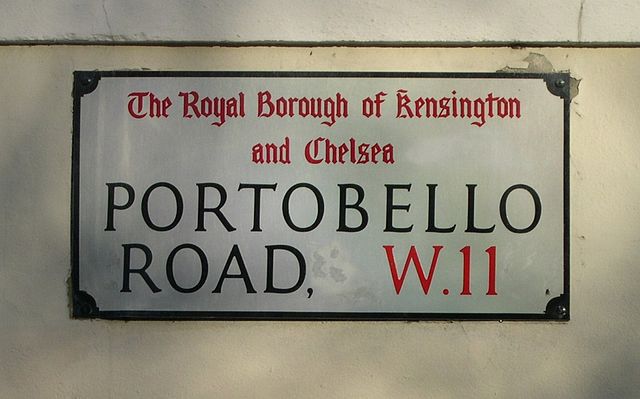 This path connecting Notting Hill in the south and Kensall Green in the north remained as such during the 18th and 19th centuries. In the mid 19th century, the Farm was sold to a group of nuns who then converted it into the Saint Joseph’s Convent.

As the surrounding districts of Notting Hill and Paddington grew into residential areas for the wealthy, shops and markets began emerging to support the growing population. This meant commerce for the rich, and jobs for the working class.

The area was transformed into the market street we know it today with the completion of the Ladbroke Grove station on the Hammersmith and City Railway line, making it accessible to Londoners from all around the city! 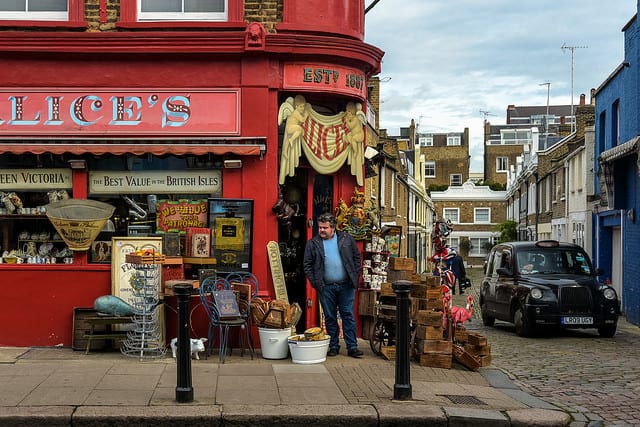 In the 1940s, antique peddelers began to sell their goods on the street, and to this day Portobello Road is famous for its antique furniture and vintage clothing options. I have been lucky enough to visit London a handful of times, and Portobello Road is always my go to for the best thrifting finds and vintage gem hunting! 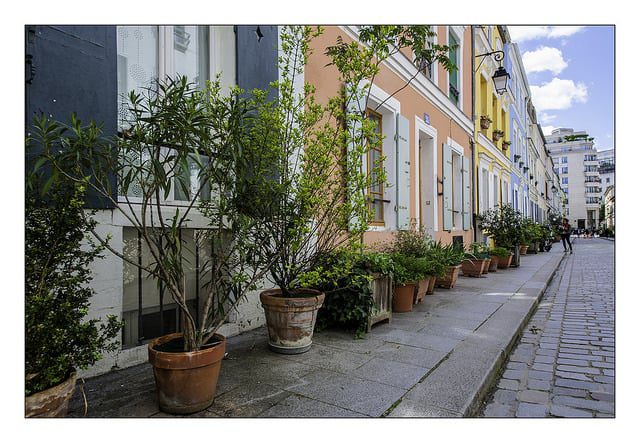 While the cobblestoned rue Crémieux in Paris is much shorter than Portobello Road, none of the charm is lost on this Parisian street. Tucked away in the 12th arrondissement between the Gare de Lyon train station and the Place de la Bastille, it’s worth taking a wander down. Lovingly called Paris’ most colorful street, the architecture brings a change from the rest of the typical Haussmannian architecture found in the city.

During the Second Empire in France, before rue Crémieux was indeed a rue, there was a place of entertainment called the Imperial Arenas which could house 1,500 people.

In 1865, the street was opened under the name of avenue Millaud, named for Moïse Polydore Millaud, the founder of the newspaper Le Petit Journal, a publication that still exists today.

The street’s name was then changed to rue Crémieux in 1897. Adolphe Crémieux was a French Jewish lawyer who fought for the rights of French Jews, and the street was named after him to celebrate his efforts! 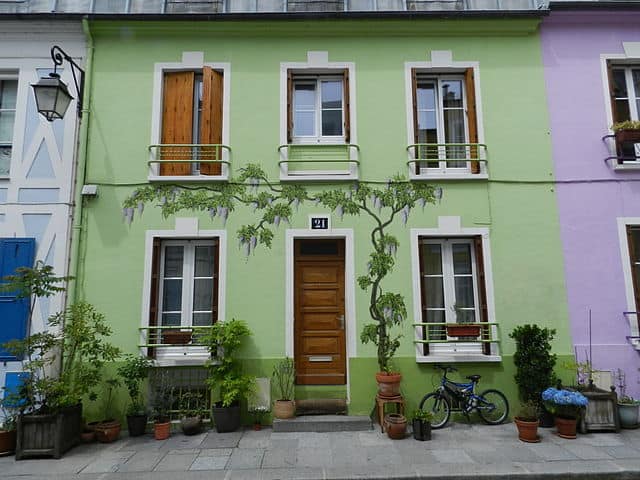 Today, the street is home to brightly colored houses, apartments, and small gardens and window boxes spilling over with flowers in the spring and summer. The city of Paris does not require the residents to decorate the outside of their homes in this way, it seems that the inhabitants themselves came up with this initiative! There are 35 identical homes on the 144 meters long street, all of which are private residences.

In addition to the pastel façades, there are several murals. Cat lovers will love the small orange kitten jumping across a window, and my personal favorite is an art nouveau scene of a woman looking out the window painted on the corner of rue Crémieux and rue de Bercy. There also includes painted ivy, and some of the houses are decorated with the typical thick painted trim that is reminiscent of cottages in the English countryside. 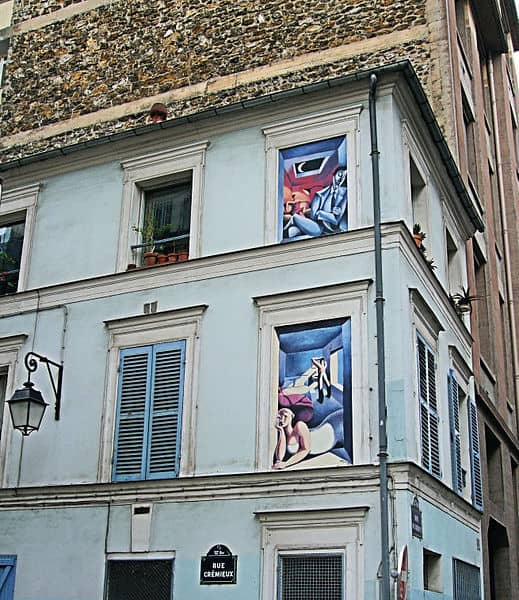 No one seems to know why the residents of rue Crémieux decided to outfit their homes this way, but I’m sure glad they did. With a quick search of the hashtag #ruecrémieux on Instagram or Twitter, you can see that this is a social media hotspot for those coming to visit Paris!

The street is located quite closely to the Bassin de l’Arsenal, a small canal that connects the Seine River with the Canal Saint Martin. There is a commemorative plaque located at number 8, which shows the level of water reached in the 1910 flooding of Paris.

The rue Crémieux is a pedestrian street, meaning you can wander where you like without worrying about cars. But, do keep in mind that this a residential street as well, so its important to respect the privacy of those lucky enough it call it home. If you forget, there are even a few signs throughout the street to give you a reminder. 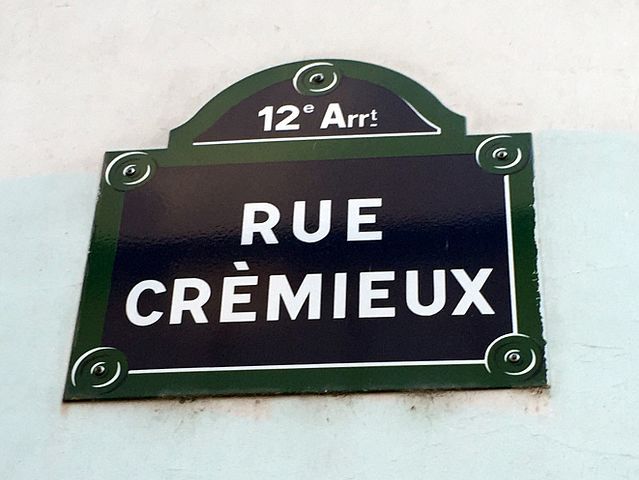 If you think you have to make a choice between Paris and London, you’re wrong! Get the best of both cities by checking out rue Crémieux in Paris, which will have you feeling like you’ve just transported across the channel.

Have any of you wandered down this street, while waiting for a train departing from the Gare de Lyon perhaps?! Let me know in the comments below…and if you haven’t checked it out yet, get your cameras ready and take a stroll!