History and tradition of French Cheese 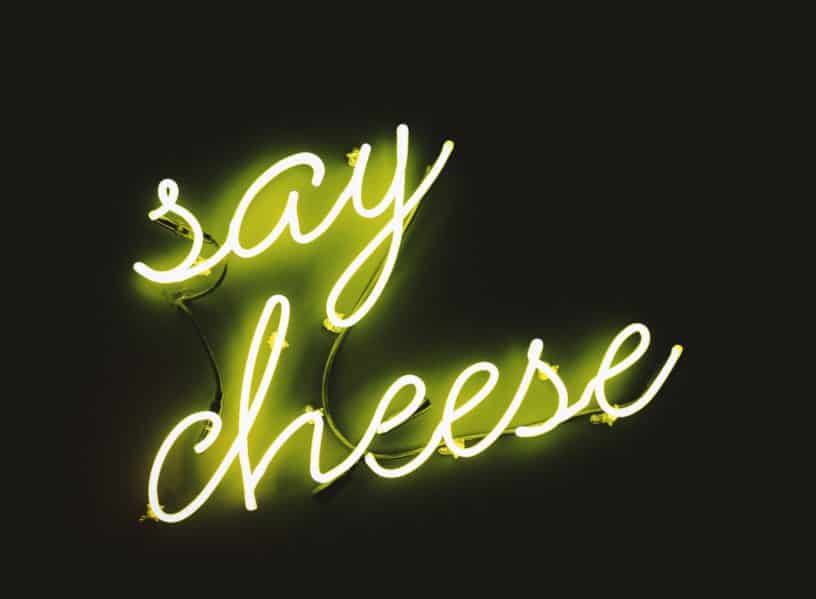 Charles de Gaulle once said, “How can you govern a country which has 246 varieties of cheese?”. Well, little did he know that France would have 1200 varieties by now.

Two million tons of cheese are produced each year and French people eat around twenty-five kilos a year individually. It represents eighteen kilograms of cheese eaten on bread or included to a meal and seven kilos of cream cheese that you put in cakes for example.

At the top of the ladder, in terms of the most popular cheeses, we have got the Emmental with 146 000 tons sold each year, followed by the camembert with 52 500 tons.

The History of French Cheese 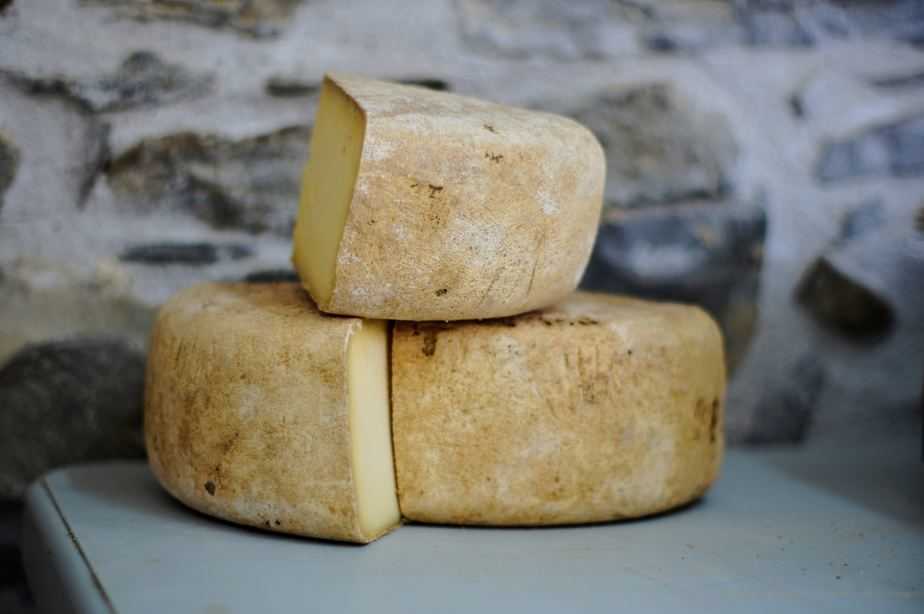 The word cheese is said to come from the baking tin that was used to prepare it. When the first cheese making technics appeared in Europe, the cheese strainer in which the curds were put used to be called « forma » in Latin and « formos » in Greek. At the beginning of the 13th century, it became « fromage », the famous French word that is now used to say cheese.

The history of cheese is closely linked to the evolution of our civilization. Before anything else, its production allowed men to preserve the milk they produced. When men started to breed goats and sheep during the Neolithic, the curd was probably put in various potteries. A legend says that the cheese-making process would have been discovered by chance. When milk needed to be carried from one place to the other people would put it in goatskins. This way milk would have curdled thanks to the natural presence of rennet, the enzyme used to transform milk. The cheese was born! 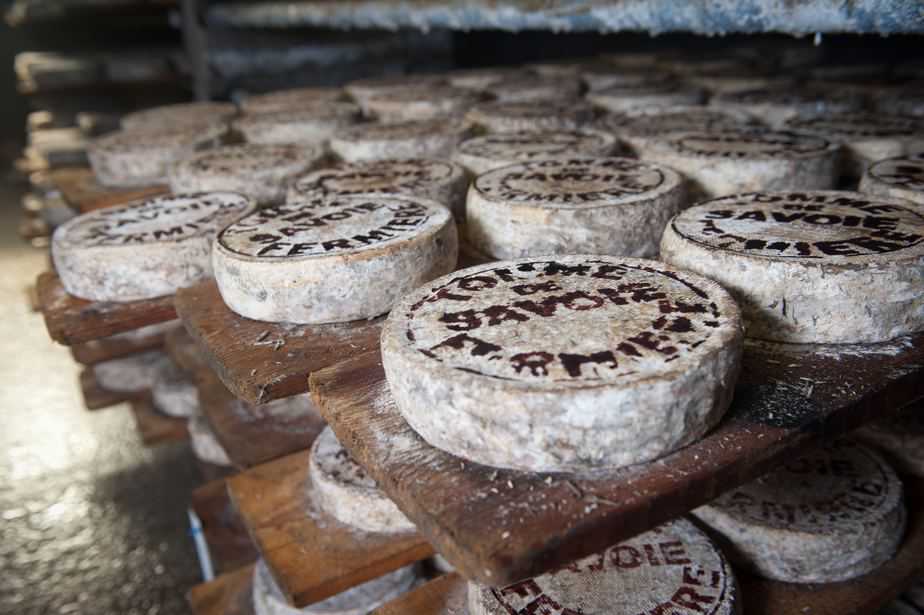 During the Middle Ages, cheese’s production has highly developed with the discovery and use of the rennet, allowing the cheese to curdle more quickly. Monks also played a big role in the history of cheese. Many recipes were made by monks in various regions of France, like Munster, Maroilles and Tête de Moines.

During the 13th century, inhabitants from the same village would pool their resources in milk to make some « fruitières ». Those big cheeses were then redistributed to all the farmers.

This process gave birth to many famous kinds of cheese like the Comté, the Gruyère, the Emmental or the Beaufort

Later on, during the 19th century, a French biologist named Louis Pasteur discovered the principles of vaccination, microbial fermentation, and pasteurization. A few years later, one of his colleagues, Emile Duclaux, had the idea of using this technic on cheese. It allowed to better control the fabrication’s methods as well as to preserve cheese much longer. 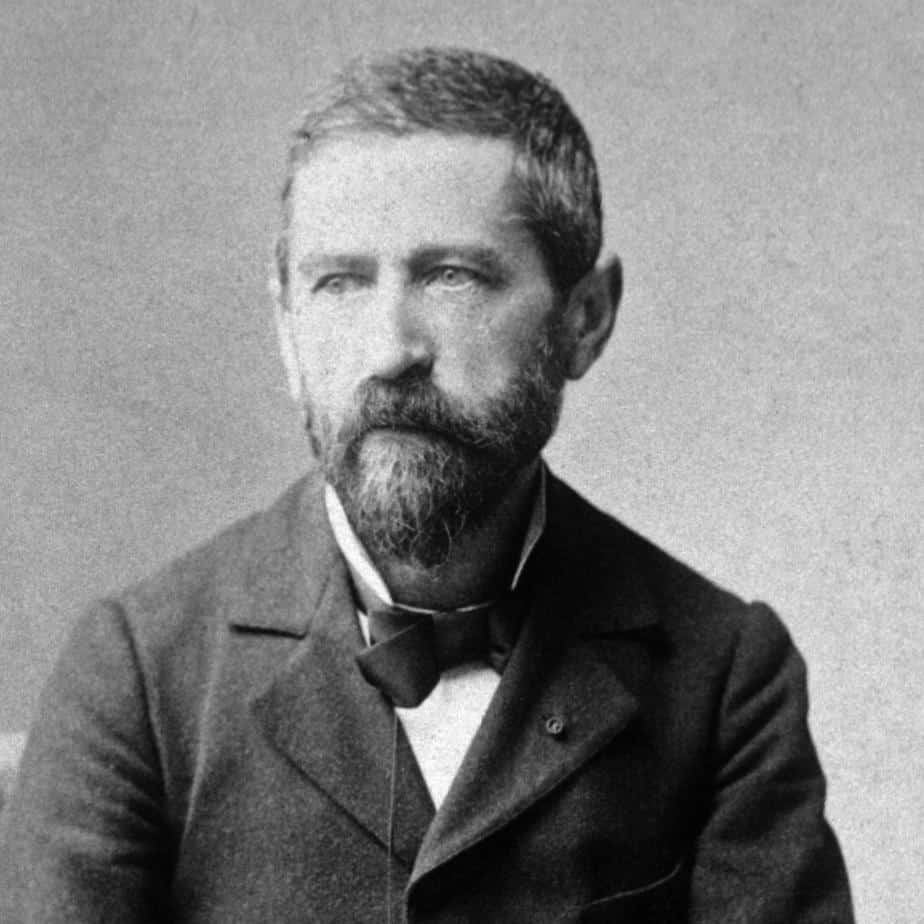 Nowadays, cheese makers are on to another fight. The twentieth century has seen the creation of the AOC label, which is a French guarantee of quality recognized worldwide. AOC cheeses AOC is the denomination of a country, a region or a locality, used to designate a product of the region which has quality and characteristics that are exclusively or essentially derived from the geographic environment. For example, if you see this label on camembert, you can be sure that it has been entirely produced and transformed in the region of Normandie. 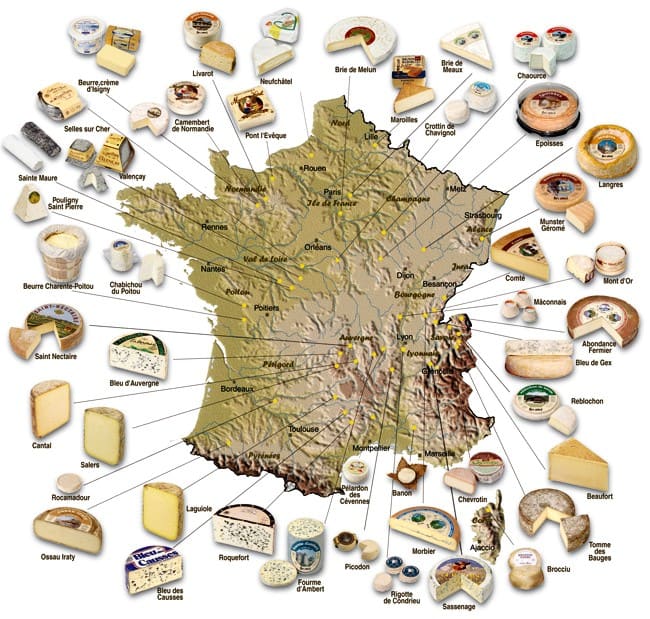 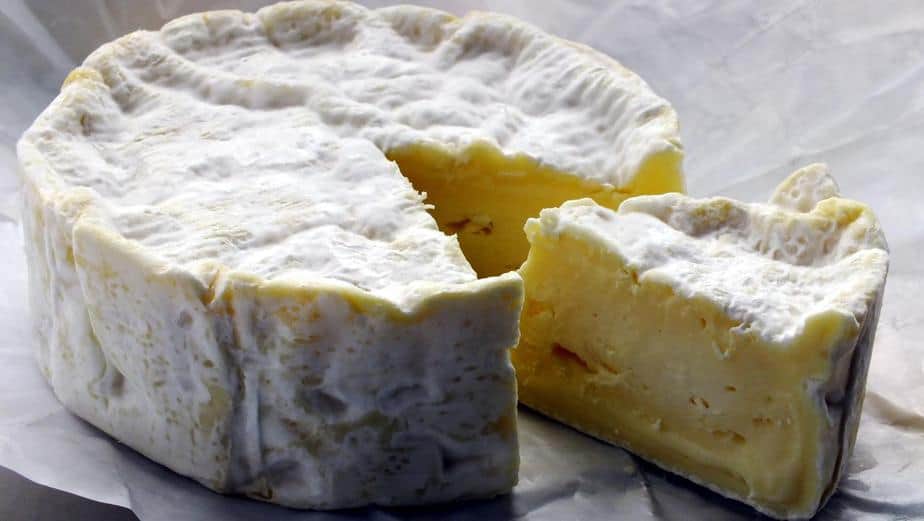 Camembert is a very famous French cheese. It is just as appreciated by French people as it is by foreigners.  It has an AOC label that certifies its authenticity and quality. The cheese is made from unpasteurized cow’s milk even though you may find some that are made from pasteurized milk. It is part of the soft cheeses’ family. It has a soft and chalky texture and a pale-white color. The rind is meant to be eaten with the cheese.

French people like to eat camembert at any time of the day with a nice glass of red wine and some baguette. This one is better when served at room temperature. 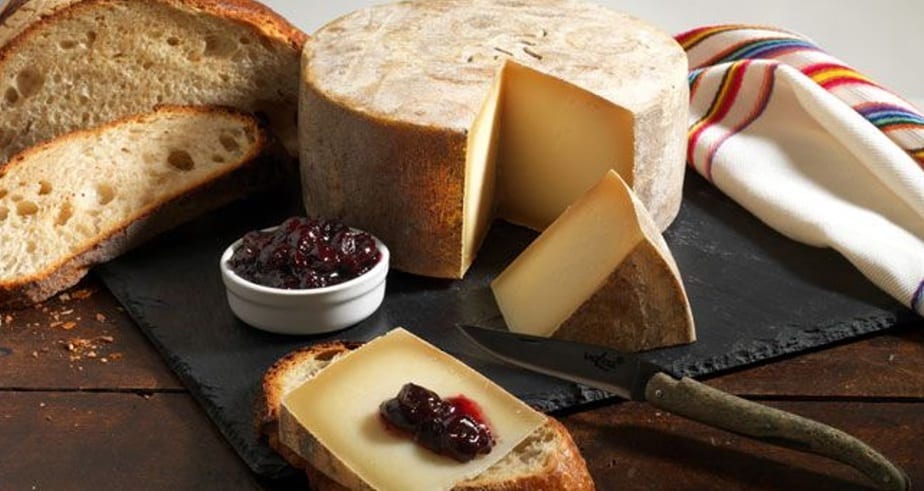 Ossaux-iraty is one of the region’s most famous cheeses. It is made from unpasteurized sheep milk, sheep that are raised in the Pyrenees mountains. It is a semi-hard cheese that weighs around four to five kilograms. It takes around five months for it to be fully matured and develop its nutty and fruity flavor.

It is traditionally eaten at the end of dinner with some cherry jam. You can also savor it with Espelette pepper or honey jelly. 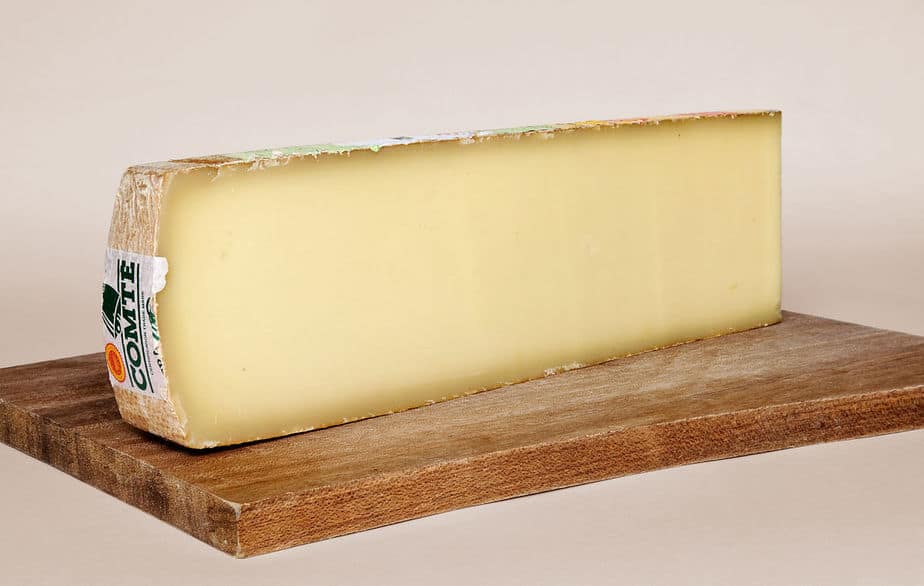 Comté is one of France’s most appreciated cheeses.  It is a hard cheese that has a very nutty and fruity savor. It takes a lot of milk to make it and at least four months to mature, even though it is better to wait eight months for more character.

Comté can be cut into cubes to serve as an appetizer or to be put in salad dressings. For breakfast, I recommend you have it on a toasted slice of rye bread with some nuts. 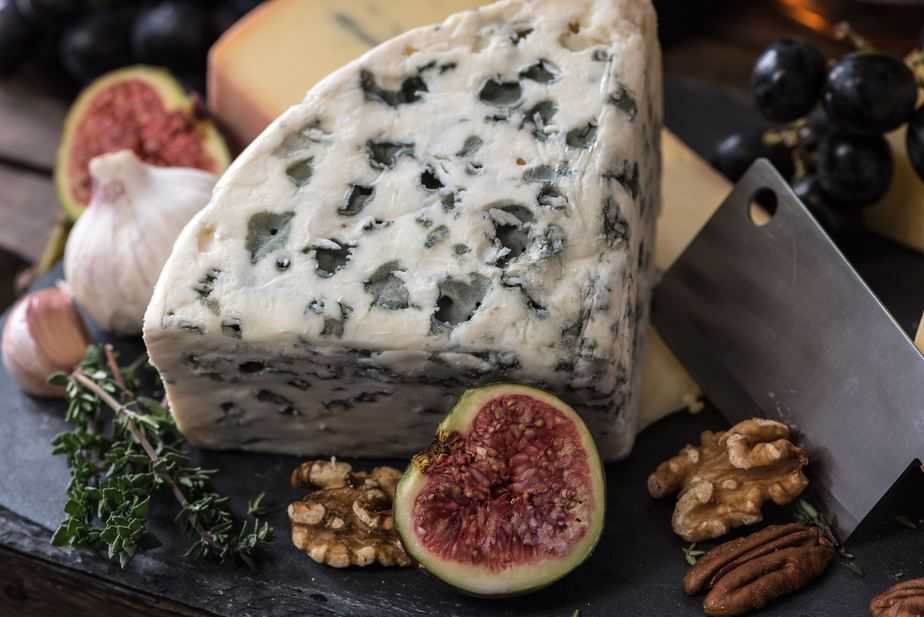 Blue d’Auvergne is a blue cheese that was created in the 19th century by a farmer named Antoine Roussel. It is either made from pasteurized or unpasteurized cow’s milk. It has a very smooth and creamy texture but also possesses a very strong smell.

It goes well with endive salads, beef as well as Fois Gras. Don’t hesitate to match this strong tasting cheese with some fruits like pears for example. 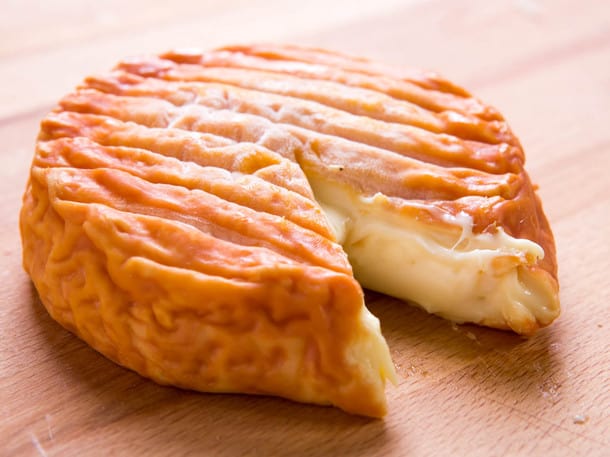 This region is famous for a cheese called Epoisse made in a little village of the same name. It belongs to the family of the washed rind cheeses. What is that? You may ask. Well, this process consists of washing the rind of the cheese with salty water as it matures to keep it soft and supple. Therefore, the cheese has a salty and creamy flavor but careful, it also possesses a rather pungent smell.

To be savored either with a strong red wine like a Châteauneuf-du-Pape or a white Burgundy. 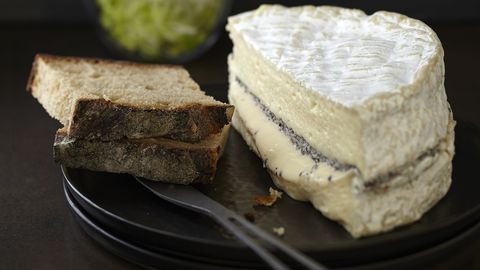 The city Coulommier, located in the Seine-et-Marne department of France, gave her name to this soft-ripened cheese. It is made from cow’s milk and is usually in the shape of a disc with a white and edible  rind

In fact, you may have seen and tasted it already. Because this one doesn’t have the AOC label, producers can make it with pasteurized milk and export it to other countries more easily. 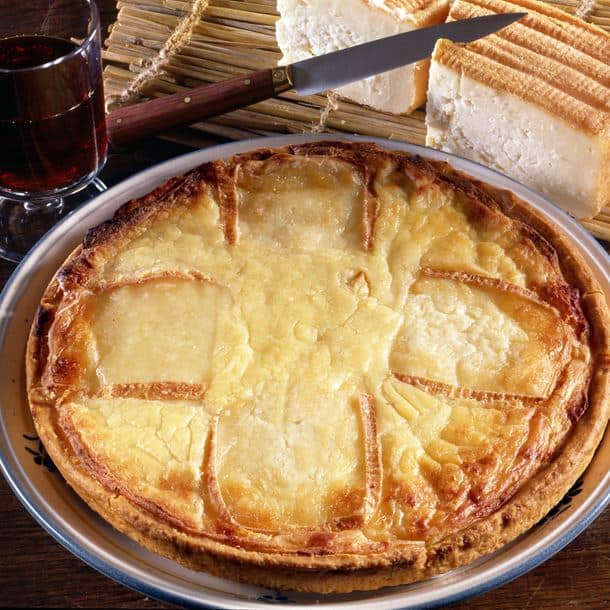 Maroilles is a cow milk cheese made in the regions of Picardy and Nord-Pas-de-Calais in northern France. The best way to eat this one is in a traditional Tarte aux Maroilles. This traditional cheese tart is usually served with salad and fries and washed down with a local beer.

Now that you have become an expert in French cheese’s history, it is your turn to explore France and go around tasting its different cheeses.  Enjoy!