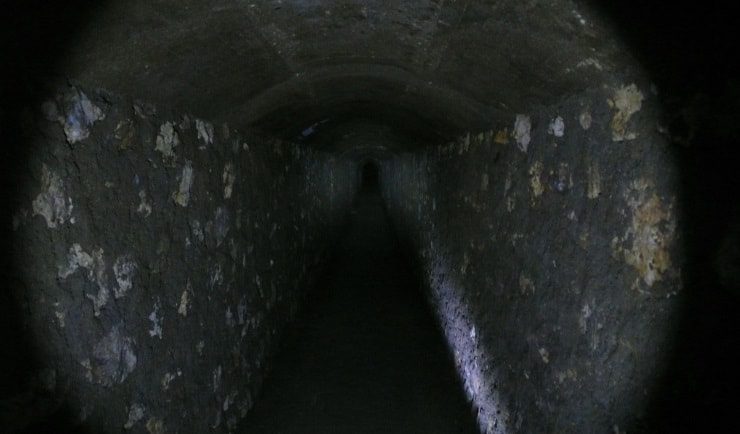 Secrets of the Paris Catacombs

Secret tunnels in the Paris underground

Hidden beneath the quaint parisian cafes, the heated terraces and the richly decorated restaurants, lies the cold, damp world of the Paris underground. After living in Paris for nearly two years, I have heard stories about the small groups of people, known as “cataphiles,” willing to brave the murky, knee deep waters of the catacombs in order to spend hours below partying, exploring, filming, and even screening movies at their underground cinema.

However, it was only weeks ago that my friend and I came to discover our own entrance leading to the secret catacombs. Due to the fact that entering the catacombs is illegal (you will be forced to pay a fine of €60), the whereabouts of these entrances are not public knowledge and can prove very difficult to find.

They are spread throughout the south of Paris, usually taking the form of manhole covers. The entrance we found was a tiny, inconspicuous hole, hidden from unknowing eyes, carved into the side of a tunnel wall.

Fighting down the oncoming claustrophobia, and armed only with the flashlights of our phones, we squeezed through and entered the maze of the catacombs. 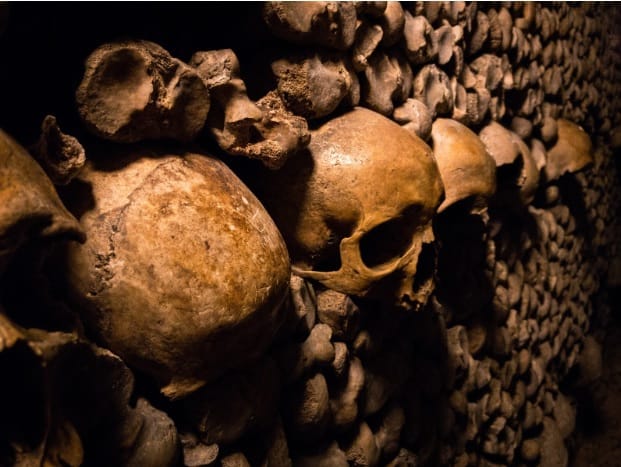 Bones line the walls in the catacombs near Place Denfert Rochereau

The smell is the first thing you notice upon entering the catacombs. The sunless air spans an estimated 200 kilometers of intertwining tunnels and rooms, ranging from the tower of Montparnasse to the Porte d’Orléans, giving off an odor of mildew and stagnant water.

Originally, before the millions of dead bodies were carted and stacked in the heart of the catacombs, the tunnels were created to extract limestone that was then used in the construction of many buildings around Paris.

It was only in the late 1700’s, due to an overflow of parisian remains at the graveyard Les Innocents, that the bones were brought down in wagons covered in black cloth and then left, strewn about in the catacombs.

Then, in 1810, the bones were reorganized into the mausoleum that we know today. The official entrance to the catacombs is located at Place Denfert Rochereau, previously called Place d’Enfer or Place of Hell. This is the only legal entrance.

It is now one of the biggest tourist attractions in Paris and is well worth a visit if you are interested in seeing the artfully stacked femurs and skulls of over six million former parisians. 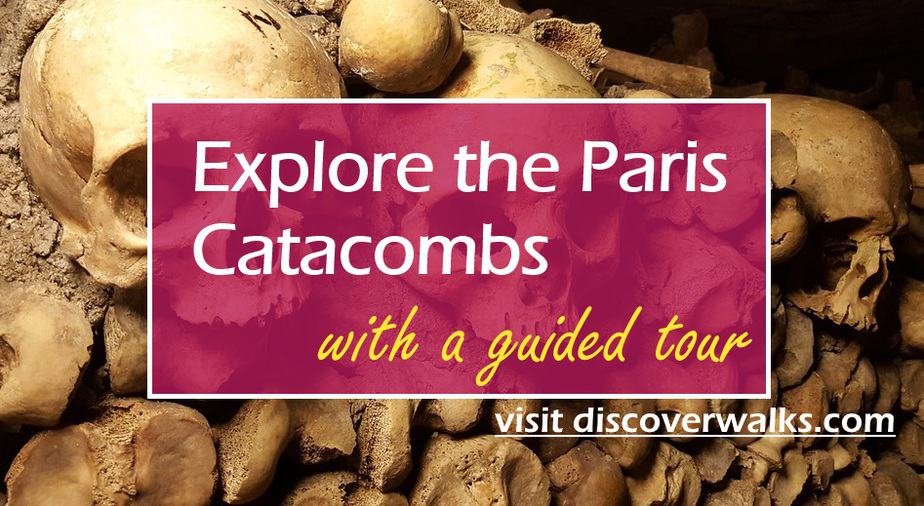 Now open for daily visits, there are 130 steps leading down to the catacombs at a depth of 20 meters (65 ft). However, if you do want to check it out, I would suggest going early and on a weekday or else you risk a line that can sometimes last hours at the Place d’Enfer. 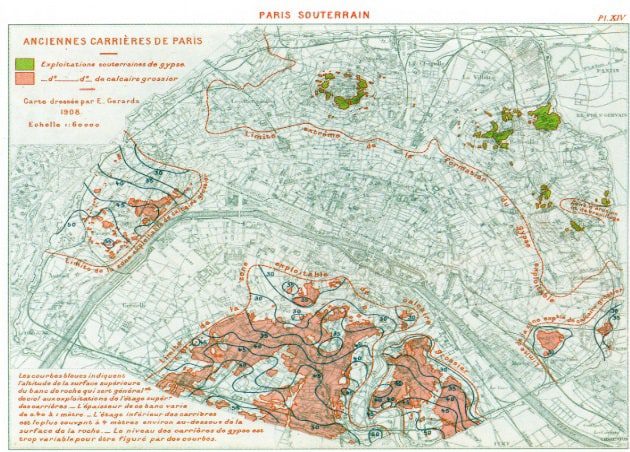 Map of the Paris Underground

Secret events are held within the Catacombs tunnels

While walking through the illegal tunnels I saw the graffiti and left over cigarette butts of past explorers that line the sides of the walls. On the roof there are dozens of different colored arrows leading in all different directions to various rooms and meeting places.

One of the most famous of these rooms is known as “la playa,” named for the sandy floor that leads to a mural of Hokusai’s wave. This is one of the hot spots in the secret catacombs and nearly every weekend you will find people here.

It is said that the secret catacombs are home to mass raves, uncontrollable parties, and satanic cults. The reality, however, is much softer than that. There is an abundance of paintings, graffiti, sculptures and communal spaces throughout the underground tunnels.

The secret catacombs are also rumored to hold dinner parties, cinemas, art events and even underground swimming pools. In 2004, a small police force known the “cataflics” discovered what appeared to be a fully equipped movie theater and bar.

Later, when the police returned, the room had been stripped of all electrical equipment and all that was left was a note that read “Do not try to find us.” There is another room that resembles that of a large dining hall with a table and chairs carved out of the limestone rock.

There have been known to be underground dinner parties that take place here. All of these events are done by different communities of cataphiles, dedicated to the idea of creating art and space outside the eyes of the law.

Dangers of the hidden catacombs

After spending close to an hour in the underground tunnels, we decided to head back the way we came. The tunnels are intricately woven and spread out through such a large distance that getting lost was my primary concern.

Although the last known death in the catacombs was in 1793, when a man named Philibert Aspairt got lost and whose body wasn’t found until eleven years later, there is still a certain amount risk to entering the secret tunnels.

In 2017, two teenage boys were found after three days of being lost in the catacombs and taken to the hospital to be treated for frostbite. It is also worth remembering that the tunnels have been built under the immense weight of Paris, and while caveins do not happen often, the  amount of rocks and debris littering the tunnel floor was enough to make me think twice.

It is for these reasons that entering the secret catacombs was made illegal in 1955. Anyone willing to try their luck in the catacombs should come prepared with flashlights, waterproof boots and a guide who knows the way. Remember that it is illegal and that we do not encourage you to visit them. 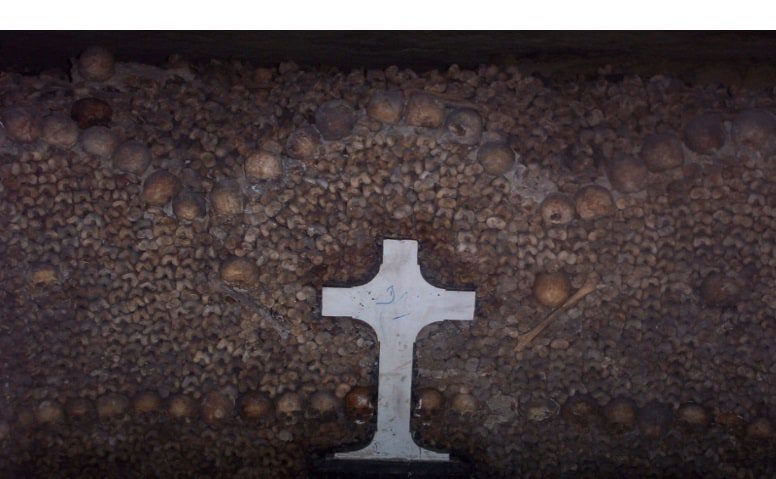 Bones, bones and more bones stacked around a cross in the catacombs

Before returning to the rainy Paris light and joining the quick paced, umbrella holding, law abiding Parisians, we turned off our flashlights and soaked in the silence and utter darkness of the underground world. It would have been a perfectly peaceful moment if only every horror movie I had ever seen had not come rushing back, along with the thought of the millions of dead bodies that have been carted through these walls.

Then, turning on my phone’s flashlight, we scrambled our way up and out, going faster than we had when we came in. Walking the streets, and once again being part of the lighted world, I felt as if I had seen something secret, something hidden from my normal life.

I understood the desire that calls to the underground communities of cataphiles. The secret catacombs are a world of freedom, self expression, community, and, most of all, a place removed from everything else. I am now left with a hunger to explore more.

Next time I go I will bring a ball of yarn so that I don’t get lost and see how much further I can explore. I just hope that the rats will not chew through it. I’ve seen that movie, too.