The George in Chiado - by The George - Uploaded by them

The vibrancy of the restaurants, cafes and retail hubs in Chiado also extends late into the evening with the districts many bars and pubs.

The constant activity in Chiado makes it one of the most exciting neighborhoods in the city center, probably just after Bairro Alto nearby. 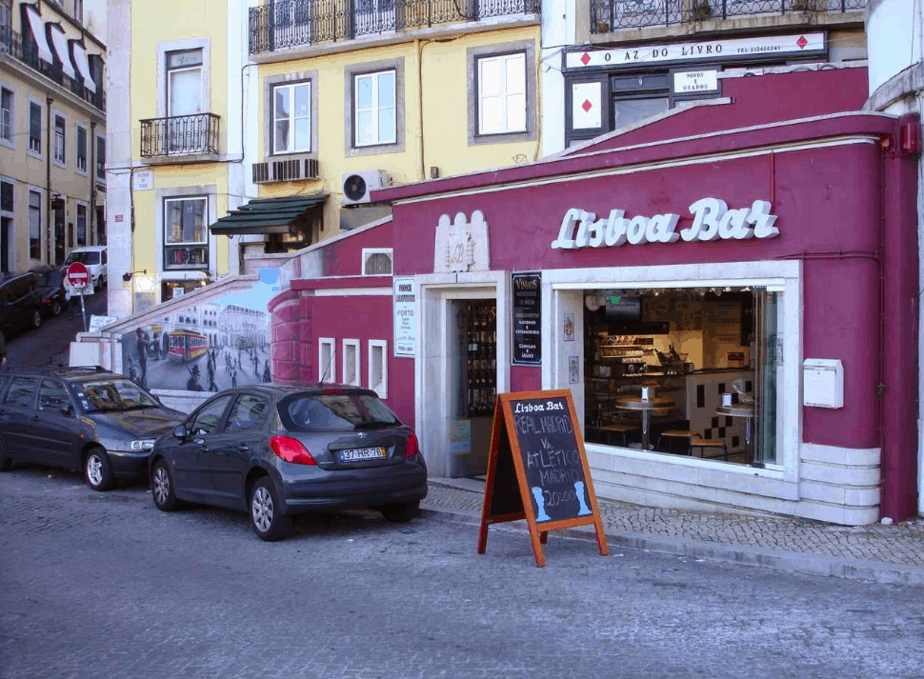 Lisboa Bar in Chiado – by Lisboa Bar – Uploaded by them

The two have nightlife in common, and when the sun sets on Lisbon, Chiado stays up until the early house of the morning. What’s great to note about this is that bar life makes all nearby restaurants more inclined to stay open later; making Chiado one of the best places in Lisbon for late night eats as well!

Here’s where to go for a drink, a chat and perhaps even a dance in the Chiado district.

The George in Chiado

One thing to keep in mind is that smoking is permitted virtually everywhere in Lisbon. Hotels and Airbnbs have done well to ban smoking indoors, but there are still a lot of restaurants and bars in the city that don’t prohibit this from occurring inside.

The George is one of these bars, so if cigarette smoke bothers you then I suggest you skip to the next! 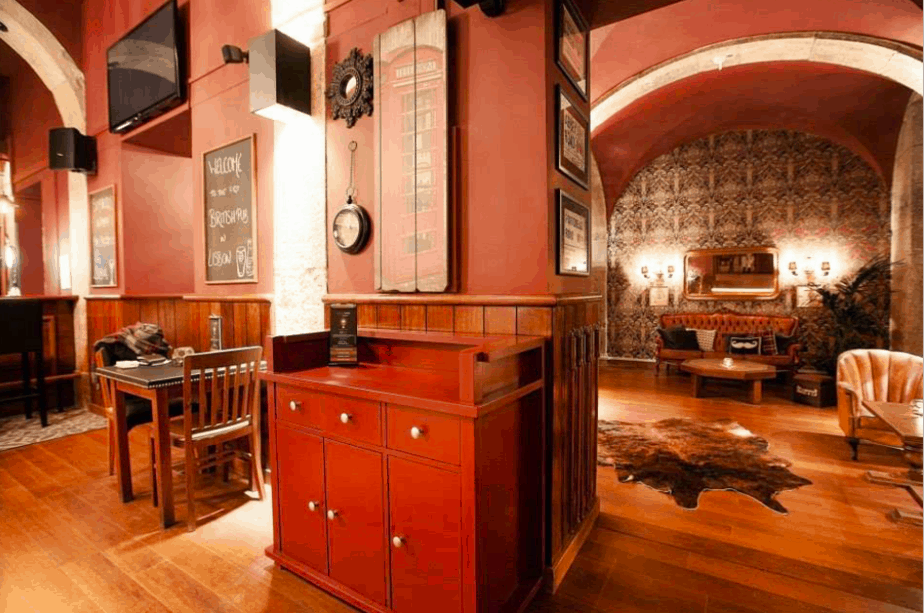 The George in Chiado – by The George – Uploaded by them

The George is an English style pub closer to the waters edge of Chiado . It’s a spacious establishment, offering a bar area and full bistro dining room as well. The food is actually very impressive, not the greasy pub food you’d expect but rather a well curated and healthy menu.

The later it gets, the rowdier this bar becomes. Arrive after ten and you’ll struggle to have a conversation over the music! It’s a lot of fun as far as nights out in Chiado go, with a lot more room to move around compared to most bars in the tiny caves of the city center.

Opening Hours: Monday to Sunday – 12pm to 2am

Situated on the roof of the Hotel Chiado, Entretanto is a beautiful spot for a drink and light snack during sunset over the Tagus waters nearby.

Needless to say the view from up here is phenomenal; the combination of the water with the cascading terra-cotta rooftops puts your heart and soul right into the center of Lisbon. 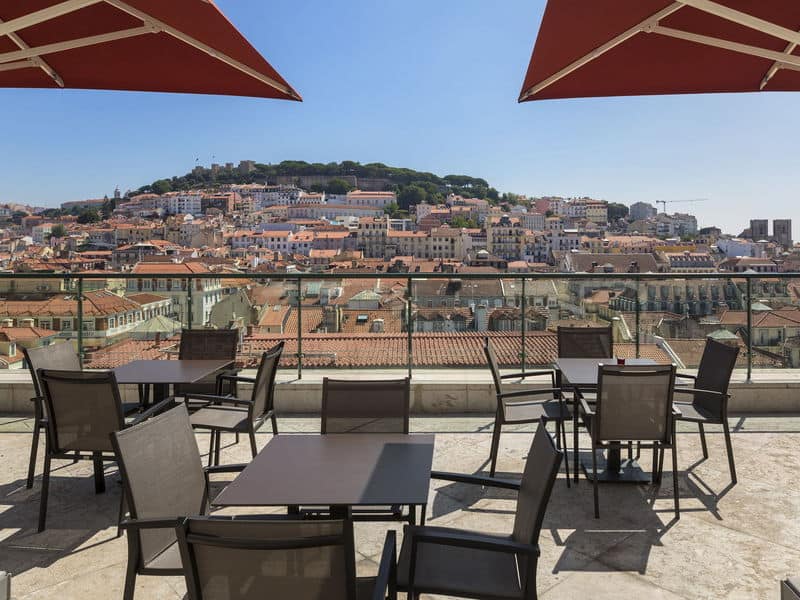 The rooftop is actually open from 10am each day, so there is ample opportunity to venture up for a drink or even just a coffee between excursions in this part of town.

The Hotel Chiado that hosts the bar is a five star hotel; as you can imagine, drinks and service on the rooftop don’t come cheap. If you’re open to splurging a little I guarantee there is no view like this in the rest of Chiado — well worth it.

Delirium Cafe is one of the most recognizable bars in Chiado thanks to their distinct pink elephant logo. On just about every free guided walking tour through the main Chiado strip there will be someone who remarks about the establishment on the second story building.

Delirium Cafe is Chiado’s main beer house, boasting many European beers on tap and Portuguese beers by the bottle. There are 35 on tap options and over 100 other beers to choose from. The bar is fully stocked with all other drinks one might enjoy, and they do great cocktails as well. 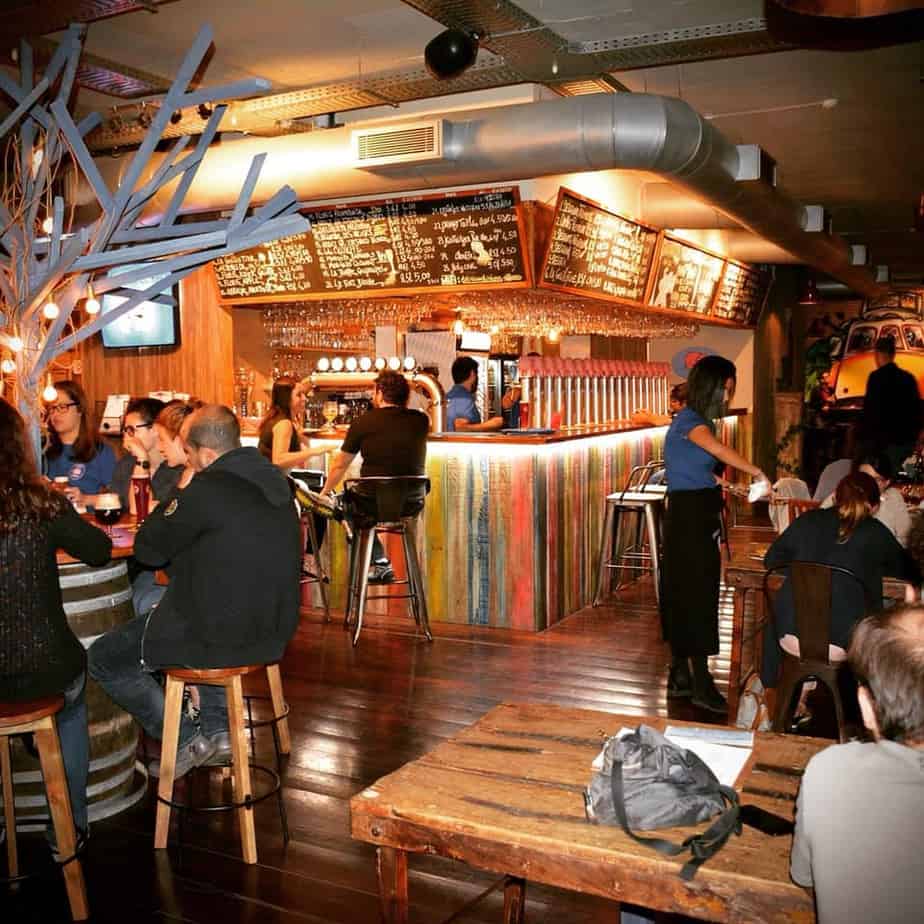 My personal favorite is their coconut beer — a must try!

They have a pub menu which consists mainly of burgers and fries. They burgers are actually famous on Instagram thanks to the luminous blue bread buns that they use.

Most of the bar is indoors but there are a few tables sat by the shallow balconies around the second floor of the building — you’ll have to get here early afternoon if you want one.

Opening Hours: Monday to Sunday – 12pm to 1am

Locals rarely come to Chiado for nightlife. They deem the district as a tourist trap and dislike the chaotic nature of the foot filled streets.

Lisboa Bar is in the very north of Chiado, some say it falls outside, some say inside; regardless, this is one spot where locals don’t mind venturing out to. 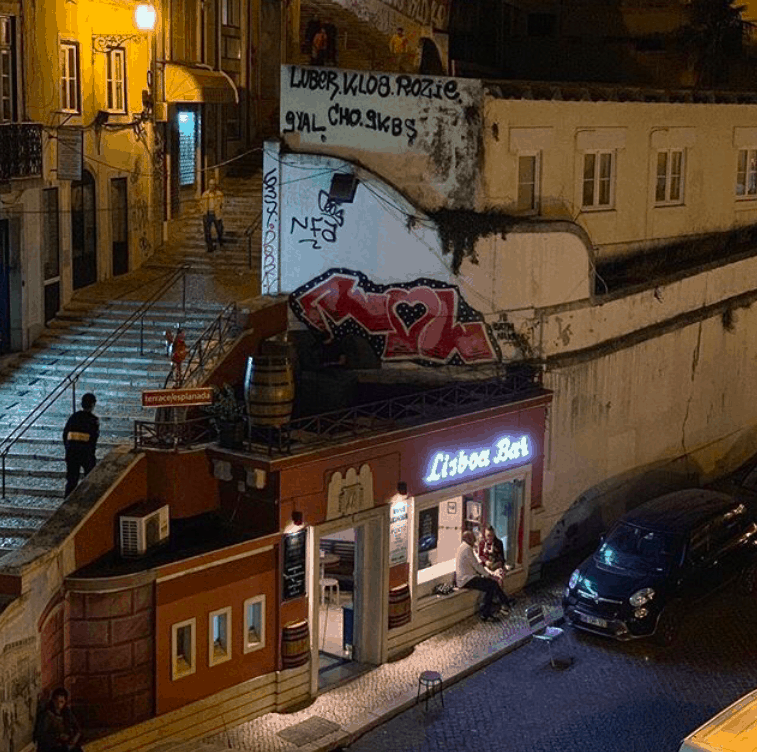 Lisboa Bar in Chiado – by Lisboa Bar – Uploaded by them

It’s a hip, hole in the wall bar where golden oldies are on the playlist, drinks are affordable and everyone is unbelievably friendly. If there were a bar pasted next to the word “cool” in the dictionary, it would probably be this one.

The bar is open from 3pm daily, and it fills up fast. If you arrive after 7pm there should already be people spilling onto the street. Even at its fullest the bar never feels overwhelming or unpleasant. Like I said, cool.

Opening Hours: Monday to Saturday – 3pm to 2am

O Purista is the last Chiado bar before the district meets Bairro Alto.

Attention to detail goes a long way in Lisbon; people are used to noticing things like tiles, balcony width and cobblestones, so O Purista has done well to use this to their advantage.

The space is not something one can ignore when walking past. It is undoubtably the most pleasant and classic bar interior in all of Chiado, with fine effort being taken in details such as lighting, furniture and flooring.

Not so much the kind of place you come to do tequila shots until 2am, but an ambient space for a drink or two before moving on to the main event.