The Best Buffet Eateries in Lisbon 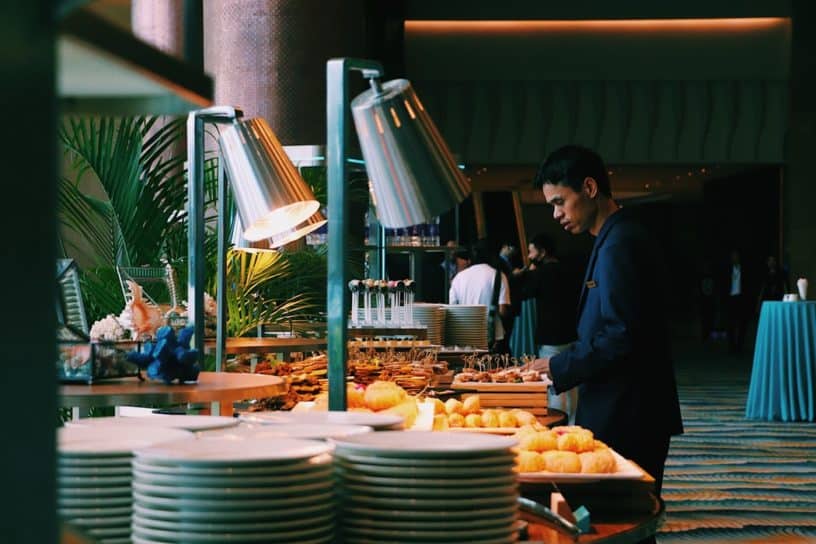 The Best Buffet Eateries in Lisbon

Buffet-style eating has slowly crept its way through Europe, with Lisbon being one of the most recent cities to join the trend.

I’ve notice that when Lisbon takes to something, they really take to it. When organic eating became popular, there were organic restaurants popping up in every district in the city. The same with the vegan and gluten free movements. Buffet’s are new on the bill! 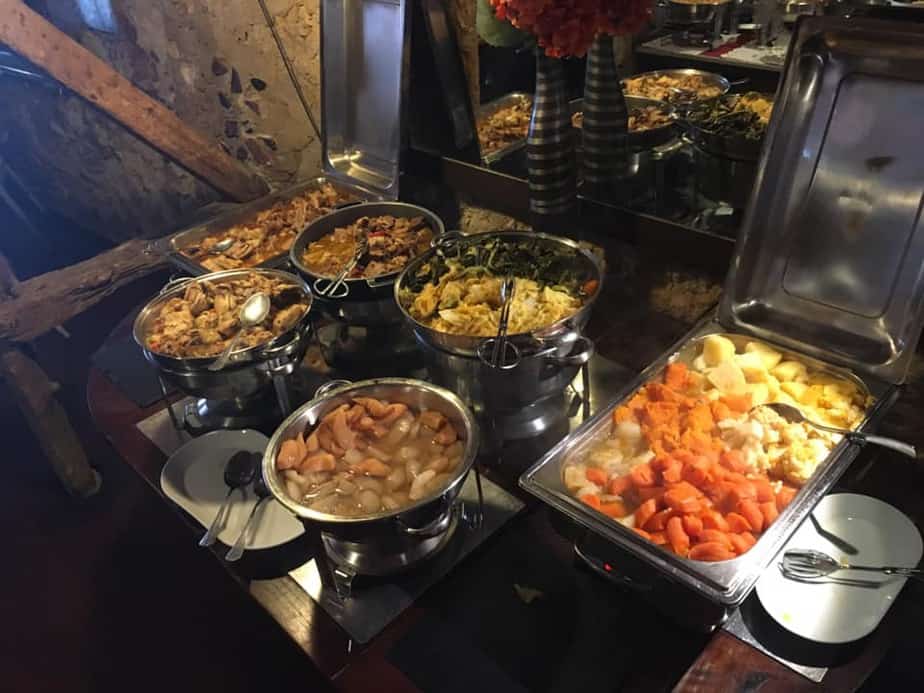 Lisbon also happens to have the most diversity in cuisines when it comes to buffets; here’s where to go:

Buffet Livre do Leao in Lisbon

In a neighborhood where restaurants and hospitality reigns supreme, Buffet Livre do Leao is competing well against the rest of the eateries in Chiado.

For just €8 you’ll gain access to their all you can eat buffet, which includes a variety of soups, breads, meats, salads, stews, beans… you name it. It’s excellent value for money and you can add beer or wines to your meal for just €3 more. 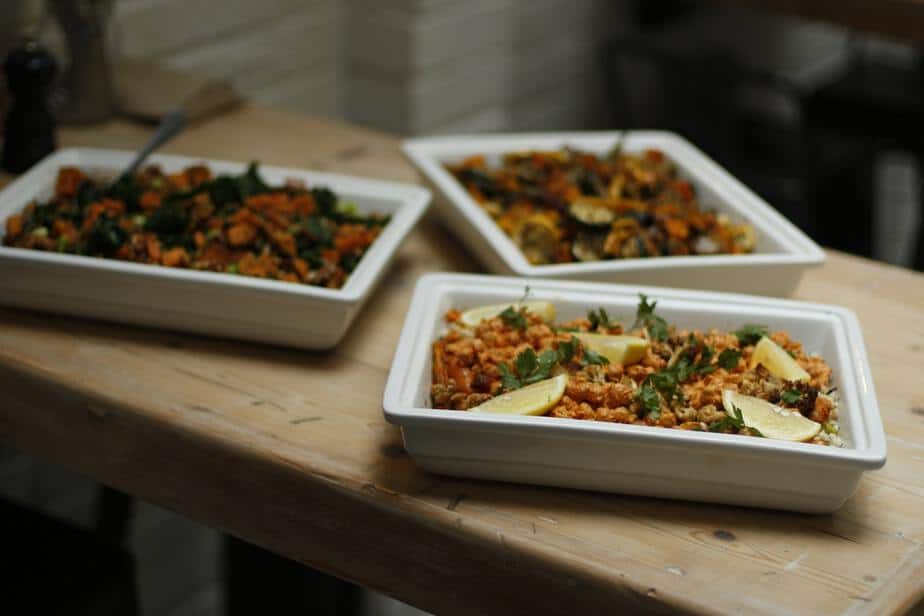 Now this isn’t a restaurant where you’d take a romantic first date, nor would I suggest even meeting a Tinder date here for the first time. But it’s a great in-and-out restaurant where you can eat quickly and not splurge on food like throughout the rest of Chiado.

Families with kids love Buffet Live do Leao because everyone east for under €10!

Note: While in Chiado, definitely consider a free guided walking tour! There is a lot of history to be experienced in these streets.

Something special for the vegans and vegetarians looking to enjoy a full buffet experience in Lisbon.

The Jardim das Cerejas is also in Chiado, but closer to the water. The restaurant is entirely plant based. The food is so good that most of their clientele aren’t even vegan or vegetarian, they just like the menu! 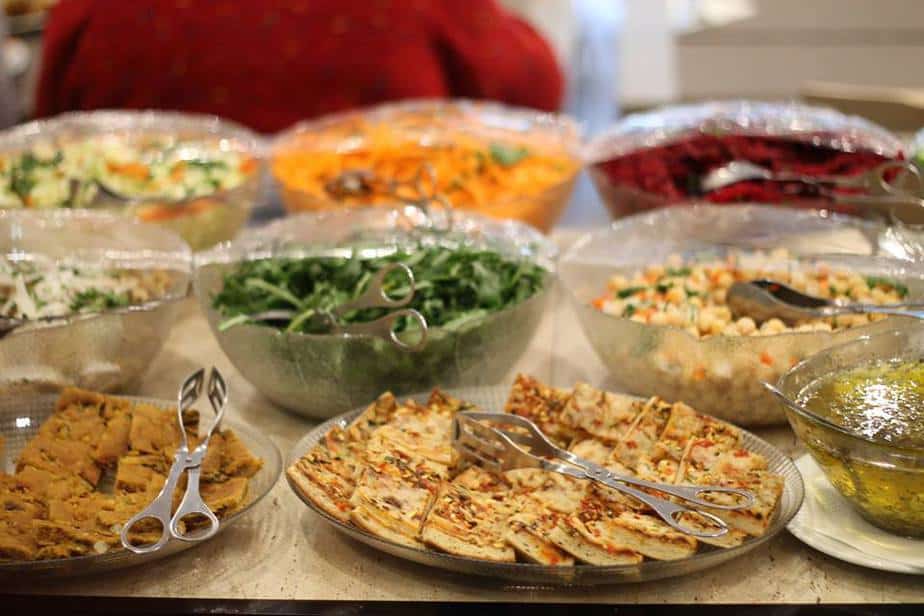 Jardim das Cerejas is one of the cheapest plant based eating options in all of Lisbon. For just €10 get full access to the buffet, all you can eat.

The array is both cold and hot meals as well as cakes, quiche, desserts, juices and even pizza.

They also do wine, which makes Jardim das Cerejas a great spot for a boozy dinner. Perhaps followed by a stroll down to the water’s edge for sunset?

The Far East perfected buffet dining long before Europe did. At King Sushi in the north of Lisbon’s center you’ll experience a proper Japanese/Chinese buffet hybrid, as you would if you were to travel to those destinations themselves.

First of all the service is impeccable. You’re made aware of exactly how everything works the minute you walk in so no time is lost.

The buffet offers a variety of sushis from both countries, as well as a selection of hot foods and raw meats & fish that you can select to be cooked on the spot. 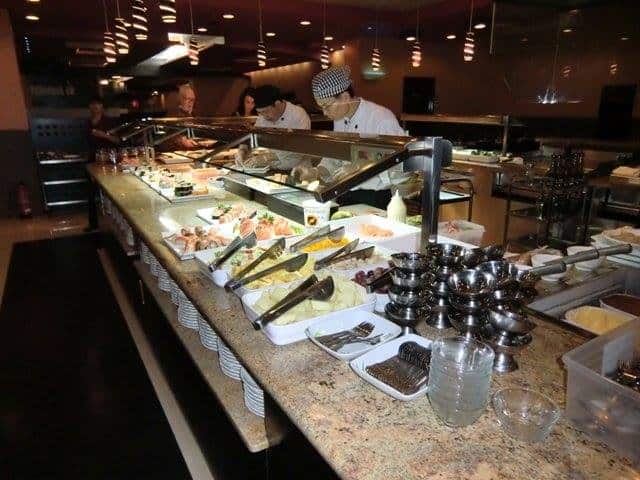 King Sushi in Lisbon – by King Sushi – Sourced from their Facebook

The price of the buffet varies depending on whether you dine during lunch or dinner. Lunch is usually €10 while dinner around €12. Drinks must be ordered separately.

My recommendation would be to get there early for both sessions, before all the good stuff is cleared out by the other early birds.

Not far from the first buffet is another fabulous, authentically Portuguese one.

The restaurant is a hybrid space, giving diners to option of ordering plated meals off of their menu or taking part in the daily buffet. Foods include all the Portuguese favorites and a lot of sea food & hams!

Sea food buffets are usually more expensive than regular ones, so expect to pay a bit more here per person. Since the restaurant is so big one rarely has to wait for a table, weekend dinners can get crowded however.

Anyone wanting a high protein buffet experience will be quite pleased with the food at Leão d’Ouro. Ample salads on offer for vegetarians and vegans as well.

Buffet dining is not common in Bairro Alto, Lisbon’s food and party district in the city center .

I found this unbelievable buffet in the north of the neighborhood, unassumingly buried between some Bairro Alto bars.

Rosa da Rua is a Portuguese and African cuisine hybrid buffet eatery. A mix not experimented with often enough, but a match made in heaven all the same. 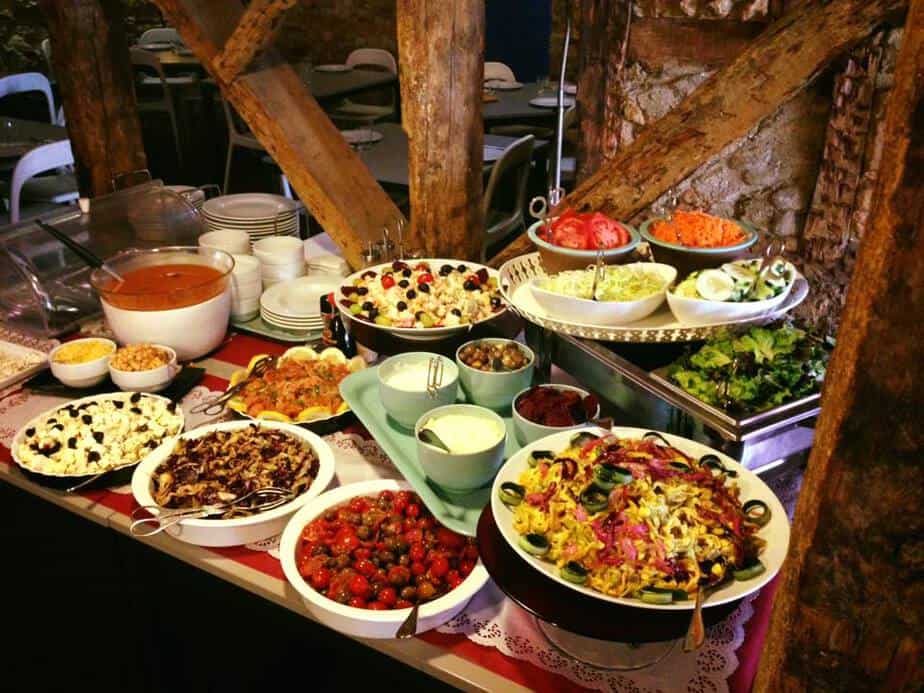 The array of meats, seafood, hot dishes, cold store, meze, garnish, sauces, sides, salads will blow you away. And the freshness of every dish can be tasted through and through; they are making everything the day it is being served.

This is a pricer buffet in Lisbon, costing around €14 per person excluding whatever you’d like to drink. It’s an extremely popular spot in Bairro Alto and booking is essential every night of the week!