Whether it’s your first time or your tenth time to Paris, going out for a night on the town should definitely be on your bucket list. Home to some of the hottest DJ’s and most fashionable clubs, Paris is a great destination for a memorable soirée. But just where can you experience the true glamour of a night out in the Ville Lumière? I’ve put together this article about the 5 most luxurious Paris nightclubs to help you decide!

Whether you prefer sharing drinks with friends in an upscale speakeasy or dancing the night away with the best DJ’s, there’s a perfect night out in Paris for you. 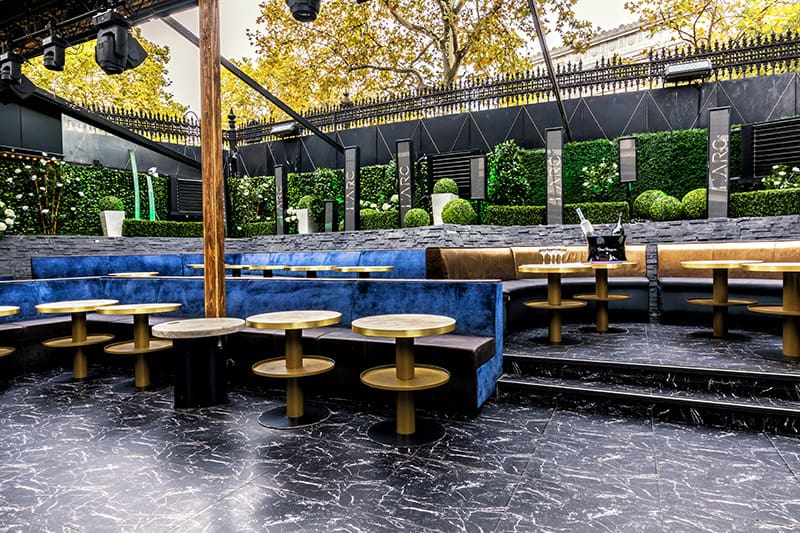 The first place on my list is one of the most well-known too! Located right underneath the Arc de Triomphe, it’s impossible to beat l’Arc’s view. Imagine dancing the night away in one of the most sought-after clubs in Paris . Now picture the decadent boulevards of Paris lit up before your eyes and the magnificent Arc de Triomphe shining in the distance. Mix it all together and you have yourself a dream come true. This is the atmosphere at l’Arc Paris. Popular DJ’s play a mix of hip/hop and house on the weekends, and draw pretty exclusive crowds. A serious hotspot during Paris fashion weeks l’Arc is filled with international socialites in the off seasons. Definitely a spot to see and be seen.

Given the club’s exclusive status, getting in can be a challenge. The bouncers tend to be quite strict and they have a firm dress code. So bring out your most fashionable outfits and hope for the best.  If you want to ensure entry for a larger group you can book a table in advance on their website.

Set in the famous clubbing area between the Arc de Triomphe and Avenue Montaigne, is a legendary Parisian nightclub. At first glance, Chez Raspoutine looks like any other glitzy spot on our list of top 5 most luxurious Parisian nightclubs. But this club has quite the colorful past!

This place has been around since 1970. And during the early years, Chez Raspoutine was actually an upscale Russian bordello and cabaret! In the seventies, the club was popular with celebrities like  Serge Gainsbourg and Brigitte Bardot .

Since being transformed into a nightclub several years ago, Chez Raspoutine has become quite the hotspot. Today, Chez Raspoutine is one of the hottest nightclubs in Paris. Holding true to the original Russian style, the interior features exquisite red and gold furnishings. And the very Baroque-style decor and velvet alcoves give a nod to it’s racy past.  On any given night, Paris’ elite fill the dance floor and mingle at cozy tables. And from Thursday to Saturday, resident DJ’s pump heady electro music until 6 A.M. Since it’s open so late, the party doesn’t really get into full swing until around 2 in the morning. So this is definitely a place where you can truly dance the night away in Paris!

Entrance can be tough, the bouncers are extremely discerning. Your best bet is to call ahead and try to book a table. Or simply dress to impress and try your luck at the door, you never know! 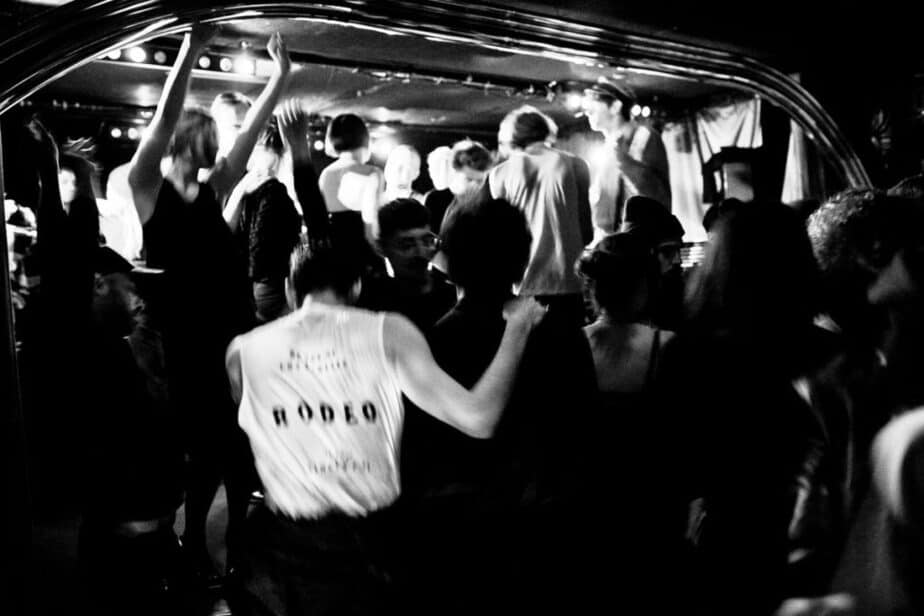 Perhaps you’ve heard of the next spot on our list of the top 5 most luxurious Paris nightclubs. Almost everyone has heard of Silencio. In Paris, the club’s eclectic crowd and eccentric reputation precede it. Silencio is unique because it’s actually a members-only arts and cinema club in the early evening hours. But this legendary Parisian spot opens it’s doors to the (elite) public for clubbing at 11.P.M.

Conceived from the imagination of David Lynch, this underground club is one of the most exclusive in all of Paris! Located in the middle of Paris’ hip 2nd arrondissement, this club draws a fashionable, artsy clientèle.  But what really sets this place apart? Silencio is literally under the streets of Paris! That’s right,  at Silencio you’ll actually be dancing the night away in 700 square meters of Paris’ lively underbelly.

The intimate cavernous space is punctuated with chic lighting and minimalist decor, which help to play up the cool underground vibe. The entry hall opens into the the main room where you can find the dance floor. One of the things I love about Silencio is there’s music from all genres there. From DJ’s spinning experimental deep house to vintage old school hip-hop, Silencio has got it all. There’s even a photo gallery and a smoking room; for that old Paris artist vibe.  But no matter the night, the club is always populated by chic party goers.

Entry isn’t easy, but if you can manage to pull it off, you’re sure to have a night to remember. After all, it’s not every night you can party in one of the most luxurious Paris nightclubs! 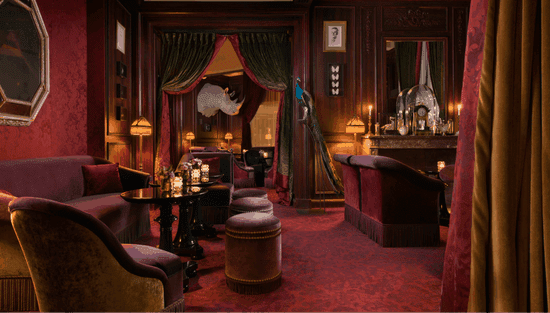 Up next on our list of the most luxurious Paris nightclubs is Le Marta. Sharing a wall with luxury hotel Le Fouquet’s, Le Marta is truly set in the heart of the 8th arrondissement, among picturesque Parisian glitz and glamour. This luxurious speakeasy-turned club has actually been flying under the radar these last few years while it underwent extensive renovations. And I must say, the final result doesn’t disappoint. This classic spot came back with a bang in 2019!  Le Marta has once again become, the place to spend a night out in Paris.

Le Marta is located on Avenue George V in the 8th arrondissement. This is known to be one of the most upscale Parisian avenues, home to some of the most prestigious shops and hotels in the city. Plus, the club is just a stone’s throw from the Champs-Elysees.  Amidst impressive Haussmannien façades is one the most luxurious Paris nightclubs! But be sure to look carefully. The entrance is actually hidden behind an antique bookshelf, which contributes to the club’s secretive, luxurious vibe.

Once inside, you’ll be treated to luxurious decor, candlelight and red velvet accents with upbeat music. It’s almost like taking a trip back in time to the Jazz age in Paris. Almost, because the music isn’t jazzy at all. But rather it features the latest chart-topping tracks. Le Marta is open until 3 A.M., so if you’re into a classic, sophisticated vibe and modern music.. what better place to dance the night away in Paris?

Nestled in the glamorous confines of Paris’ 8th arrondissement is Le Piaf. You’ve probably noticed by now, but this area is pretty much the hotspot for upscale clubs in Paris! Perhaps the most glamorous spot on our list of the most luxurious Paris nightclubs is Le Piaf. If you’re wondering if the name is a nod to iconic parisienne singer, Edith Piaf, it’s actually completely unrelated! Fun fact: the club’s name comes from 19th century Parisian slang meaning “little songbird”.

During the early evening hours, Le Piaf is an upscale restaurant and bar. So this is a perfect option if you want to have a dinner or drinks out before going clubbing! Red velvet plays a central role, and gold accents and framed portraits adorn the walls. Classics like foie gras, truffled risotto and canapés are served up on vintage dishes. Plus, their extensive wine and cocktail menu ensures you won’t leave thirsty. Come nightfall, this luxurious Paris club is definitely known for drawing in the city’s best dressed night owls.

Head down the stairs in the back of the restaurant to the dance floor. This is where the partying takes place! For a cool, speakeasy-type feel, the room is again lined with velvet benches and covered with touches of gold and red. Elegant and sophisticated in terms of both decor and clientèle, the Piaf manages to exude a retro feel without being kitschy. But what about the music? Well, a grand piano and a DJ booth are visible in the corner. But the music varies from day to day. At Le Piaf, fresh new artists fill the club on weeknights and more renowned DJ’s usually take the helm on weekends. But the genre ranges from jazzy to electro, so be sure to check the lineup in advance.

Which one to choose?

So now you’ve read all about the top 5 most luxurious Paris nightclubs, and you’re ready for a night out in the city of light! But which place should you try first?

Of course, it depends on the ambiance you’re looking for. If you want an all-out party kind of night, I would suggest L’Arc or Chez Raspoutine. Both have great music and definitely get pretty crazy after 2 A.M.

On the other hand, maybe you prefer more of a chill night, in a place where you can get up and dance, but where you can also kickback with your friends. In this case, Le Piaf, Le Marta or Silencio will be your best bets. All of them have programs starting earlier in the evening, and offer a more relaxed vibe later on. As an added bonus, Le Piaf and Le Marta also serve food!

Now it’s up to you! Let me know which nightclub you tried, we always love to hear from our readers. And if you have any questions or comments, or would like any further information on our tours please don’t hesitate to contact us!

In any case,  I hope that you’ve enjoyed this article and that the information has been helpful for you. Hope to see you soon in Paris!