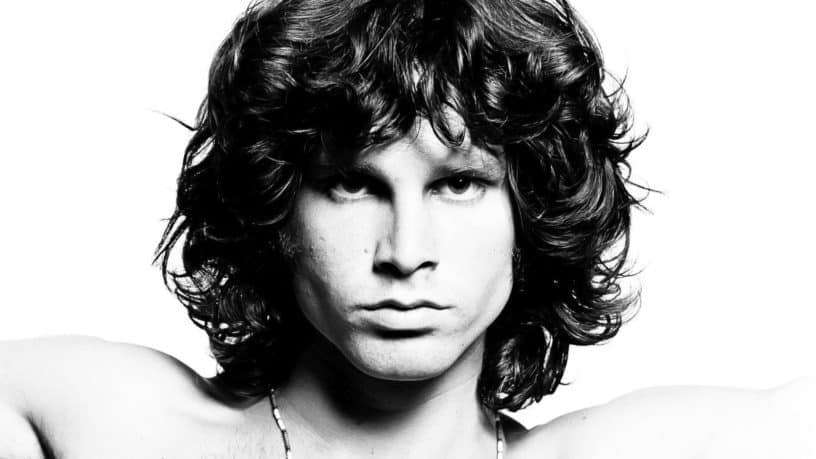 Are you a fan of The Doors? Are you a fan of Jim Morrison? Or are you simply curious? Do you feel like visiting the place where one of the best rock legend rests in peace? The charming Jim Morrison was buried in the Pere Lachaise cemetery in Paris. If you come to the city, do not lose the opportunity to see his grave.

This cemetery is one of the most famous ones in the world for several reasons. Apart from Morrison, you will also find the graves of Oscar Wilde, Edith Piaf, Molière, Eugène Delacroix, and many others! But today, I will be focusing on Jim Morrison’s. So, read on and find out the best way to find Jim Morrison’s grave in Pere Lachaise!

Who is Jim Morrison?

First of all, let me remind you of who Jim Morrison is and tell you a little more about him! He is one of the founders of The Doors. He’s a poet and a singer, and definitely one of the most famous rock stars in the music industry! He was an amazing performer, and quickly became an icon among youngsters. He was only 27 years old when he died in Paris. He was buried in the Pere Lachaise cemetery. Since then, fans from all around the world come to see his grave, making it one of the most visited tombs of the cemetery. 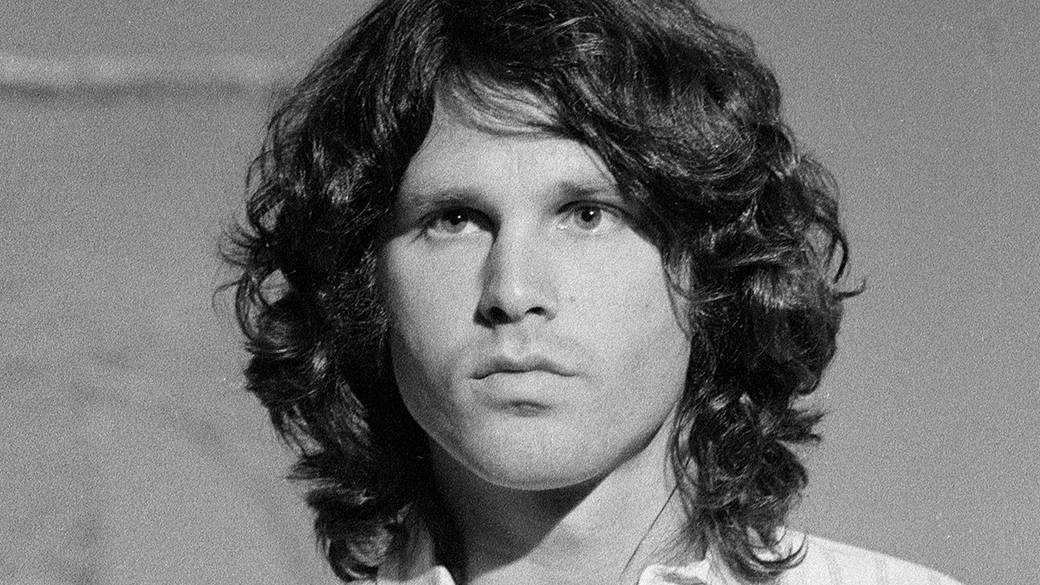 Jim Morrison was born in Melbourne, Florida in the United States in 1943. His father worked for the US Navy and his mother was a housewife. He had a very strict upbringing, which is why he always challenged the authority.

Jim Morrison always had a curious nature and always craved knowledge, he used to read and write a lot. Allen Ginsberg, William Blake, Arthur Rimbaud and James Joyce are some of his favorite authors. As time went by, Morrison grew up and his rebellious spirit also grew stronger.

At 20 years old, he moved to California on his own to study cinema at the UCLA in Los Angeles. It was during this time that he met all the members of The Doors and that he started writing lyrics. The oppositional youth started taking shape, leading to the hippy movement and growing criticism over the Vietnam war.

In 1965, he obtained his diploma in him and founded The Doors the same year. His talents were soon spotted. His tight pants, his mesmerizing voice and look, his moves thrilled the fans. They were witnessing the birth of a legend.

The Doors music was (and still is) unique and particularly innovating for the time. A mix of psychedelic rock, jazz, pop, and blues creates a music phenomenon that marked the spirit of the public. “Break on through”, “Light my fire”, “Riders of the Storm”, “People are strange” are some of the most loved rock songs ever produced!

Where is Jim Morrison buried?

One of the most frequently asked questions around Jim Morrison’s life is: where is Jim Morrison buried?

Although a lot of people claim he should be buried in his hometown in Melbourne in the United States, the Pére Lachaise Cemetery has not received any proposals to remove Jim Morrison grave site from there.

Actually, the only people who could ask for such a request are his family members, whom to this day respect Jim Morrison’s own decision to be buried in this scecific cemetery, near one of his favourite writers, Oscar Wilde.

So, where is Jim Morrison buried? Jim Morrison grave site is and will remain located at Pére Lachaise Cemetery in Paris for a long time.

Why was he buried in Pere Lachaise? 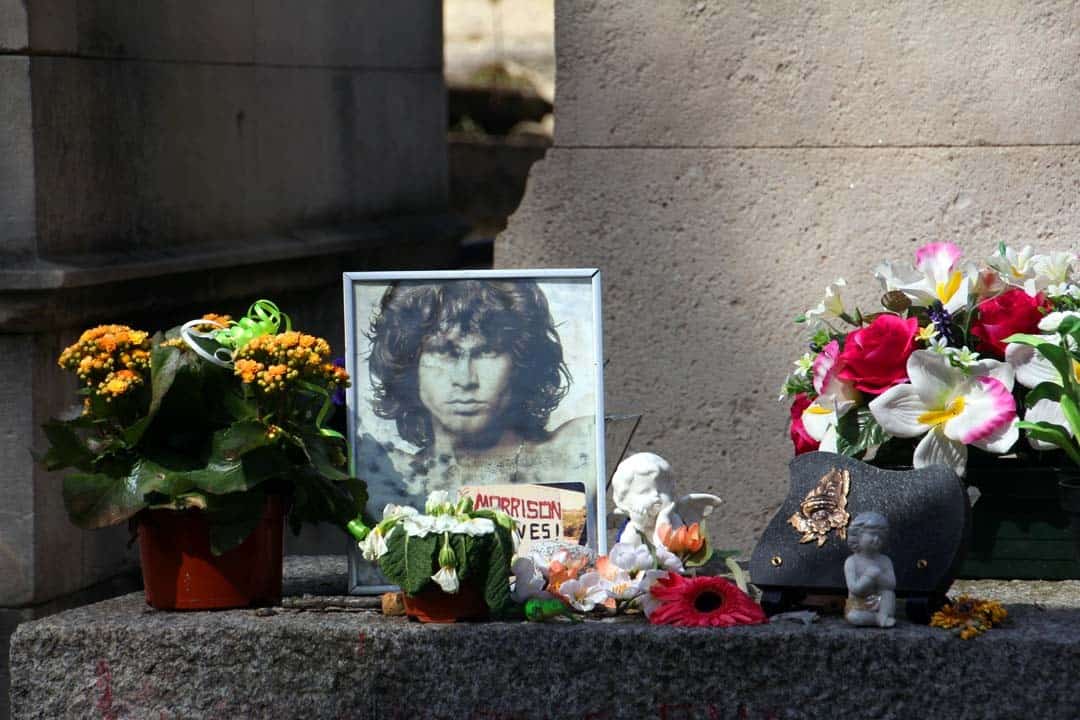 Jim Morrison was having much trouble dealing with all the crowd’s attention and the media. He developed an alcohol and substance abuse and dependence. At the beginning of the 70’s, he tried to shift away from The Doors and in spring of 1971, he decided to move to Paris with his lover, Pamela Courson.

Unfortunately, Morrison didn’t resist the addictions and was found dead in his bathtub in July, 3rd of 1971. The official report stated that he died from a heart attack, but it is still kind of a mystery.

You might be wondering why Jim Morrison was buried in the Pere Lachaise cemetery, and his body didn’t return to his family.

A few weeks before his death, he went visiting the cemetery. He walks the Pere Lachaise’s alleys for hours. He saw the tombs of several important figures, but above all, he wanted to see Oscar Wilde’s grave, which was one of his idols. That is when he decided he wanted to be buried next to him and to all the great figures that rested in this cemetery, and why he ended up in Pere Lachaise.

What is the easiest way to get there?

The Pere Lachaise cemetery opens at 8 AM from monday to friday. On saturday it opens at 8.30 AM, and on sundays it opens at 9 AM. It always closes at 6 pm. If you want to have a peaceful moment near Jim Morrison’s grave, I strongly advise you to get there before 10 AM. After this hour, people start arriving and there also are some guided tours. These will ruin the silence.

The best way to find Jim Morrison’s grave in Pere Lachaise is to enter the cemetery by one of the main entrances, located on Boulevard de Ménilmontant. You can reach this entrance, stopping at Père Lachaise or Philippe Auguste metro stations on line 2. 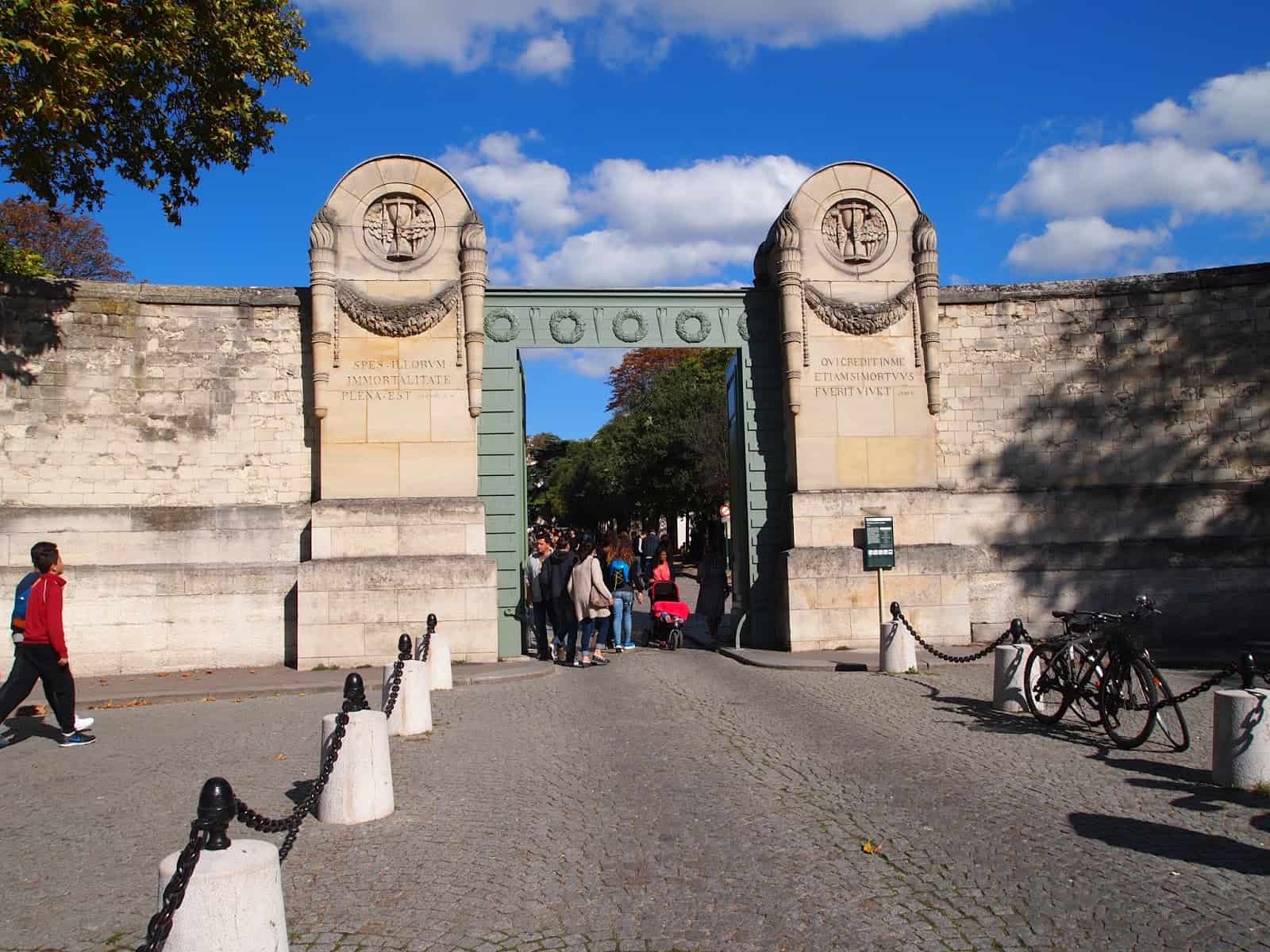 Then, you have to walk up the big alley until the first intersection. Turn right on Avenue du Puits, inside the cemetery. At some point, the Avenue du Puits becomes Avenue Casimir Périer. Don’t worry, keep walking this alley until you reach a roundabout, which is “rond point” in French.

Once you’ve reached the Casimir Perier roundabout, take your first right and walk down to the next intersection. At the intersection, go right on Chemin Lauriston. Walk again until the alley divides into two alleys. Then, go to your left. Usually you will see some people standing close to Morrison’s grave, so you will easily find it!

Once you’ve reached his grave, you will probably be astonished, because his grave is quite modest and discreet. It’s been through several changes throughout the years, because some fans used to trash the grave. But it really is isolated and kind of “cheap” for such a legend! But the truth is that it doesn’t really matter, because he lives on in our hearts. 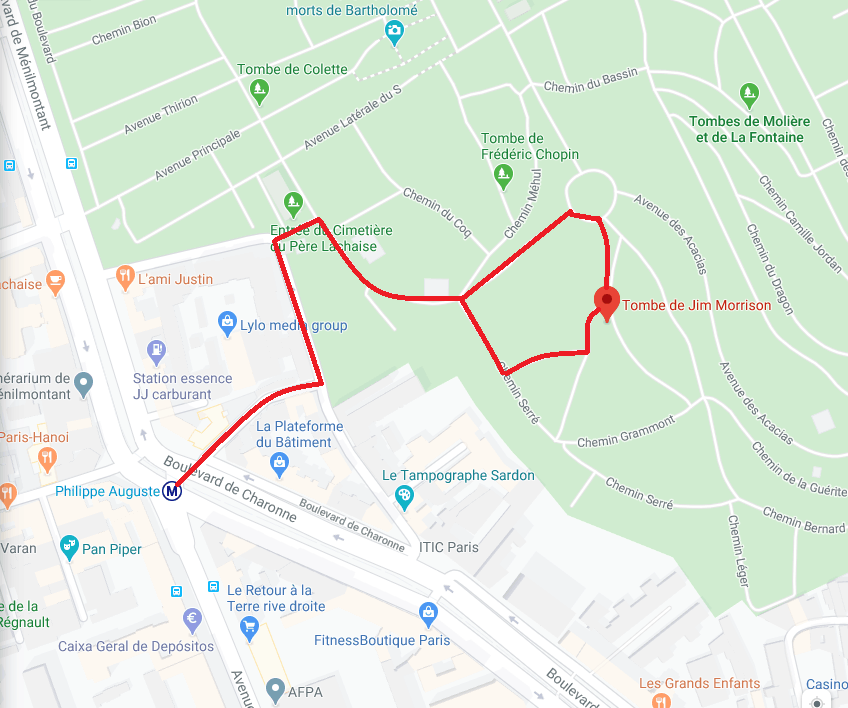 Alternatively you can follow this red path I draw on Google Maps that leads you from the metro station Philippe Auguste straight into the entrance of the Pére Lachaise Cemetery and you’ll easily get to Jim Morrison grave site.

Watch this video on YouTube.
Planning a trip to Paris ? Get ready !

You now know the best way to find Jim Morrison’s grave in Pere Lachaise! I also advise you to read this article to know a little more about the cemetery itself, and to join our Marais tour because Morrison lived in an apartment in this neighborhood. Walking the area will somehow allow you to feel closer to him. I hope you’ve enjoyed reading this article and that it has been useful to you. Don’t hesitate to contact us if you need further information about anything! See you soon in Paris!