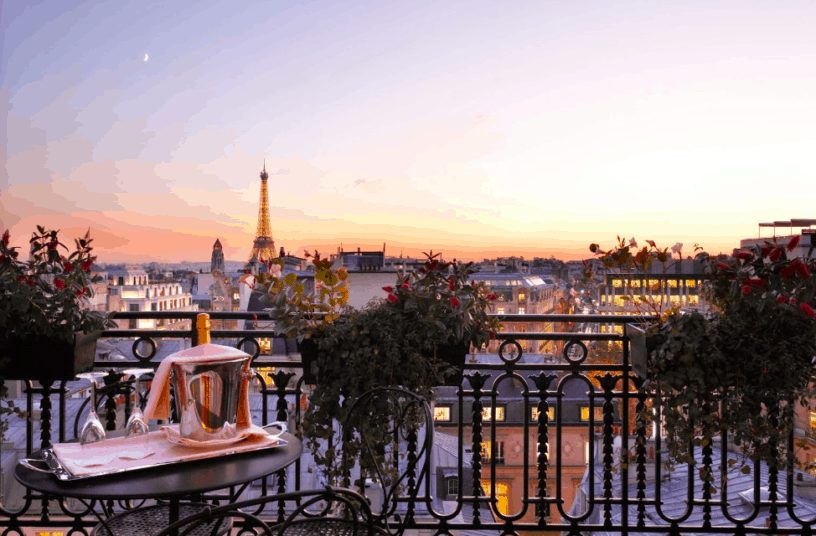 Most people travel to Paris with the misconception that any hotel offering an Eiffel Tower view must automatically be way out of even a midrange budget. They presume that this iconic landmark is left to the luxury hotels to enjoy.

In reality, the Iron Lady stretches her long neck high enough into the sky so that both luxury and modestly priced forms of accommodation in the area can see her at all times. She is everyones, and pays no mind to who paid more for a room in the city. 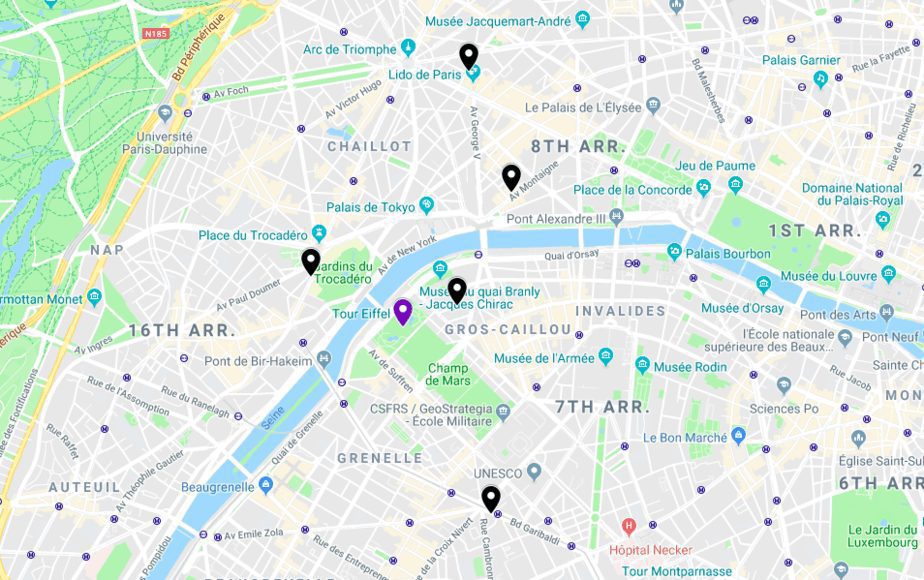 Sometimes the best hotel view of the Eiffel Tower (marked in purple) isn’t even the one closest to the structure itself. It’s the ones further back that offer views of the entire tower, perfectly framed inside of the portrait windows of their suites.

Here are a few of the best; a few to suit all budgets!

The Derby Alma is on the Left Bank of the Seine, on the same side of the Eiffel Tower . You’ll view her from the east looking west, and her base won’t be visible through the rest of the neighborhood.

The Derby Alma has made the most of the views that this property is able to boast. Each room in this Haussmann style building comes with a walk on balcony that is spacious enough to hold a table and chairs. This is not common for balconies in Paris as they are notoriously shallow. 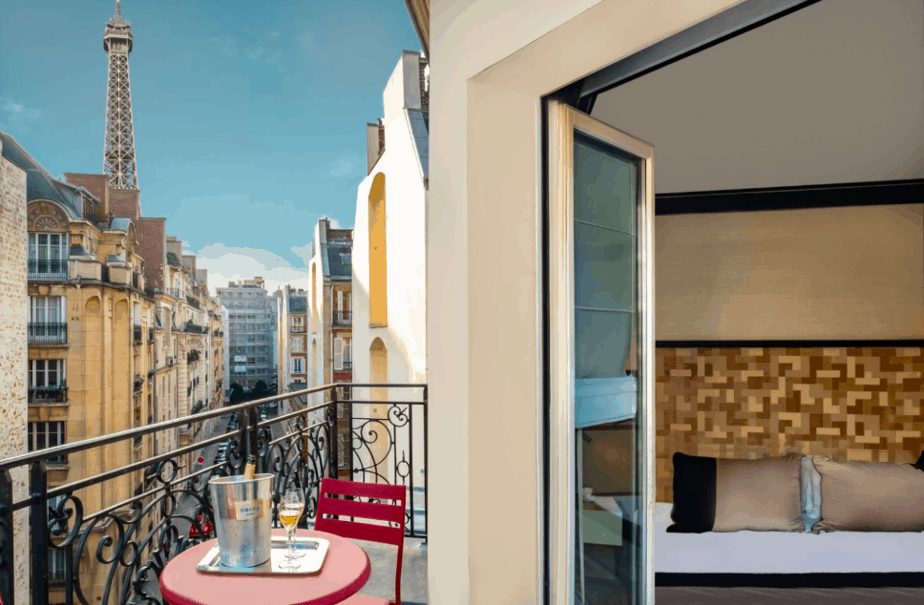 Derby Alma in Paris – by Derby Alma – Uploaded by them

Guests are able to enjoy breakfast from their balconies while overlooking the tower nearby. It’s an experience dripping with Parisian authenticity; one for the bucket list, if you will.

Derby Alma also offers a buffet breakfast in the communal part of the hotel. There is also a lounge and bar open for guests to enjoy.

The street just below the hotel, Rue de Monttessuy,, is a lively spot for restaurants near the Eiffel Tower. Cuisines on this single street range between Asian, Italian and authentic French.

If you are in a position to splurge on accommodation, I would argue there is no hotel better suited than the Plaza Athénée on the Right Bank.

The hotel is situated in the “Haute Couture” district of Paris, and the interior is intended to reflect just that. It is opulent living at its finest, while remaining distinctly modern and avoiding that ‘Palace of Versailles’ flair quite remarkably.

The Plaza was built facing toward the Eiffel Tower, and most of the rooms offer panoramic views from the windows and balconies. 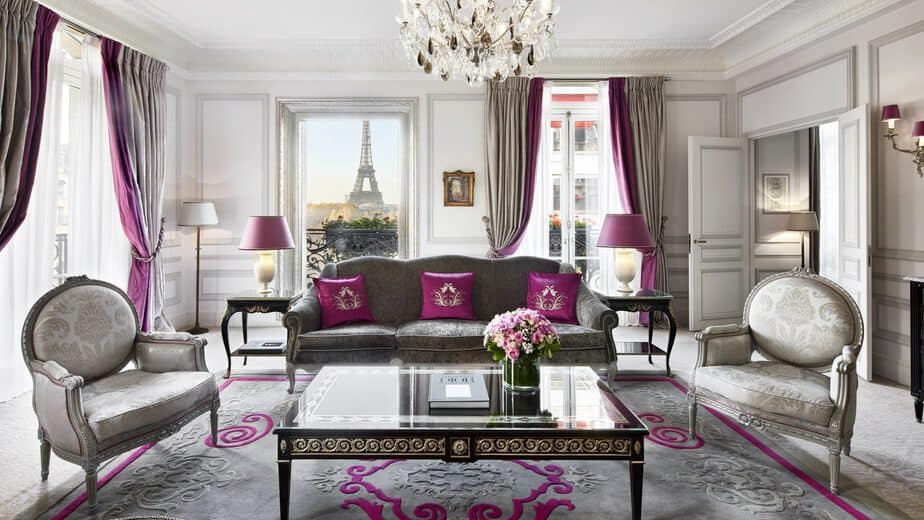 While some will argue this as the major highlight of the hotel, I like to shake things up a bit and suggest the inner courtyard is actually where the real magic happens. Reflective of an overgrown jungle, all of the inner walls of the hotel are covered in plant life, while delicate red awnings peep out from the greenery marking each suite.

It’s magnificent. Worth a visit even if you’re not staying at the hotel itself.

That Eiffel Tower skyline view I mentioned earlier can be found in the rooms at the ever charming Hotel Balzac. It was named after French novelist, Honoré de Balzac, who spent his last living days in this hotel.

The hotel is a frequently passed spot on free guided walking tour through this area near the Arc de Triomphe. It was originally built in the 19th century as a residence for the director of the Paris Opera. 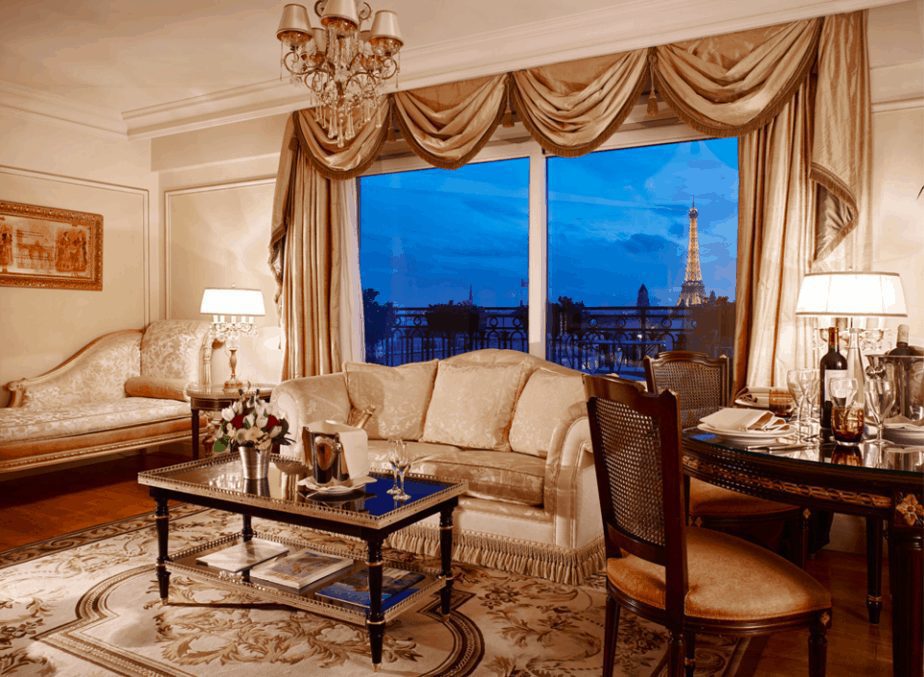 The hotel offers luxury living at affordable rates. The rooms are simple elegance.

Note that not all of the rooms offer the panoramic Eiffel Tower view. It is only a section of the hotel that faces the right way to offer this and you’ll need to request upon booking.

The First Hotel is also on Paris’ Left Bank, but this time you’ll be viewing the Eiffel Tower from west to east, instead of east to west.

It is situated near the southwestern edge of the Champ de Mars and is one of the favorite boutique hotels in the area. This is largely due to the impeccable customer service that all guests receive while staying here. This is the cheapest hotel in this roundup yet the only one offering champagne and macarons upon arrival. 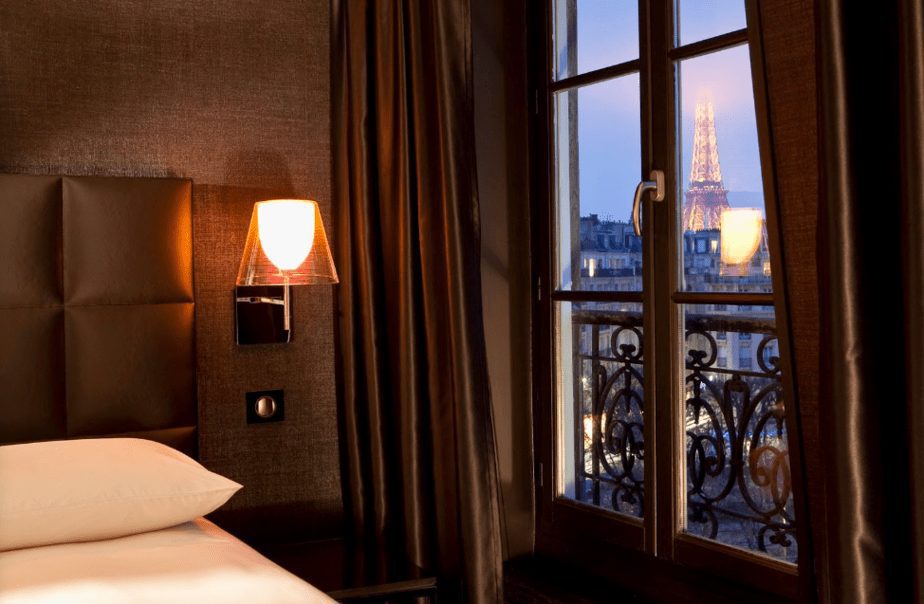 The Eiffel Tower is viewable from most of the rooms in the hotel. She’s not as closes as you’d think, the Champ de Mars is deceivingly long and puts one at great lengths from the structure.

Where better to get up close and personal with the Eiffel Tower than from a bed on the tower’s balcony itself. The Trocadéro is referred to by locals as “the balcony” thanks to its forefront location just ahead of the tower.

Aa the name would suggest, the Hotel Eiffel Trocadéro combines these two attractions perfectly. Most of the rooms in this boutique hotel offer a rather exquisite view of the top half of the tower right from the suite beds. 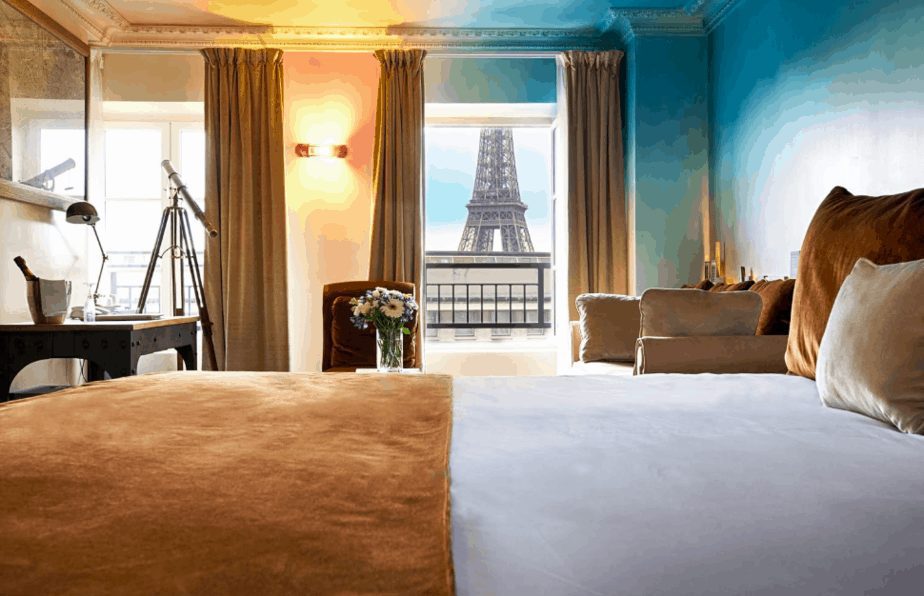 You’ll quite literally wake up to her in the morning.

Just below the Trocadéro, before the Seine, there is a large green space that dips down into a valley of sorts. Built here is a massive fountain feature with multiple pools. In the summer swimming in the feature is permitted, as is sun tanning on the grass surrounding it.