Portugal explained: everything you need to know about the Carnation Revolution 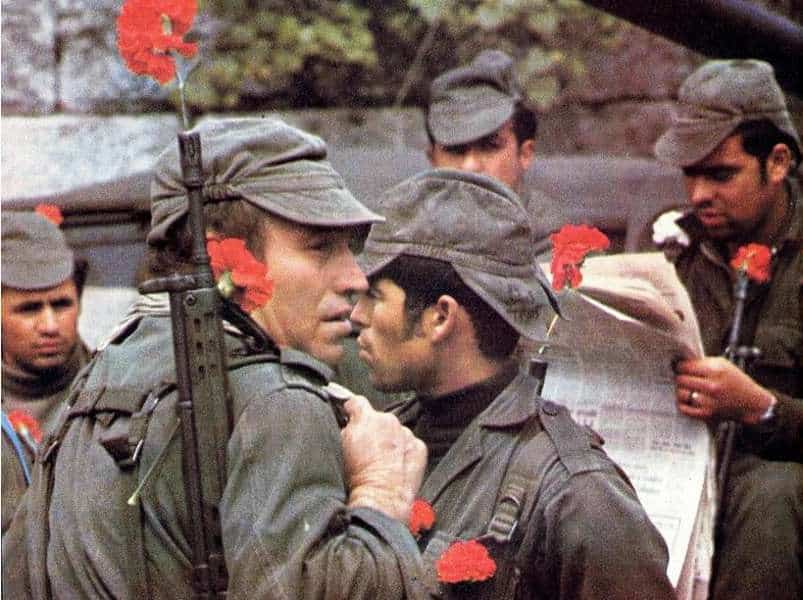 Portugal explained: everything you need to know about the Carnation Revolution

Today I want to share with you a little bit about Portuguese history. This article will focus on one of the most important events that occured in Portugal, the Carnation Revolution. This revolution happened on April, 25 of 1974. Since then, it is a non-working day in Portugal and the people still celebrate this historical event that changed the course of history for Portugal. It is a very important date in the Portuguese calendars, which is why I think it is essential for you to know about the Carnation Revolution.

Whenever one visits a new country, they usually want to experience it as much as possible. They want to get to know the culture, the lifestyle, the history. If you want to understand the Portuguese mindset, I think it is important for you to know what was happening in Portugal and how the Carnation Revolution happened. This will allow you to visit Lisbon on a new perspective, you will be more curious and interested in Portugal history. Read on and find out everything you need to know about the Carnation Revolution!

What was the Estado Novo? 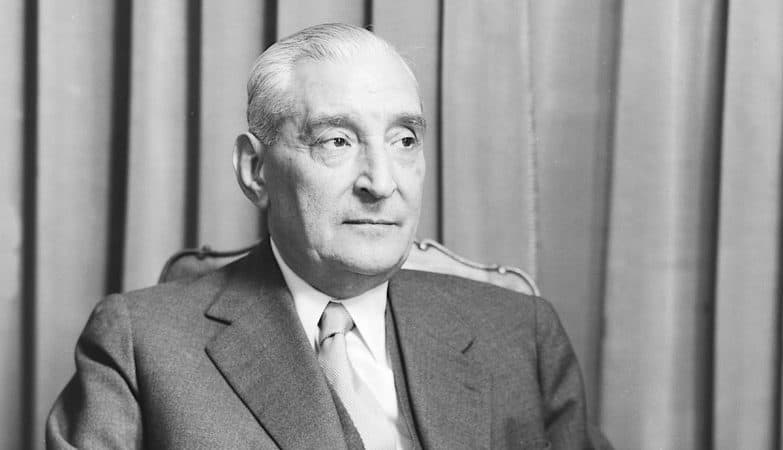 When Salazar became President of the Council in 1932, he sent the military back to the barracks and replaced them soldiers with professors of the Coimbra University. These professors established the Government staff that remained until the fall of the regime. Salazar, then, gave the order to draft the new Constitution that ended the military dictatorship. The Constitution of 1933 established the Estado Novo, which means “New State” in English. Salazar established an authoritarian regime which was based on instruments of repression whilst keeping a republican form of government.

The Portuguese were tired of the instability, so Salazar faced very little opposition at the beginning. There was a few strikes and revolts, but they were all controlled and ceased by Salazar military forces. But no one thought that the Estado Novo would last for more than forty years! For Salazar, several values were essential for the foundation of any nation and society: God, homeland, family and work. These principles were the ones by which Salazar ruled over the people.

How did the Carnation Revolution happen?

The Revolution of April, 25 of 1974, overthrew in just a few days the Estado Novo that persisted for more than forty years. It lead to a disruption to the political, social and economical regime of Portugal. During the year of 1975, people were not sure of the outcome of the revolution. They were not sure if it would lead to a popular or a liberal democracy, they even feared a new civil war. 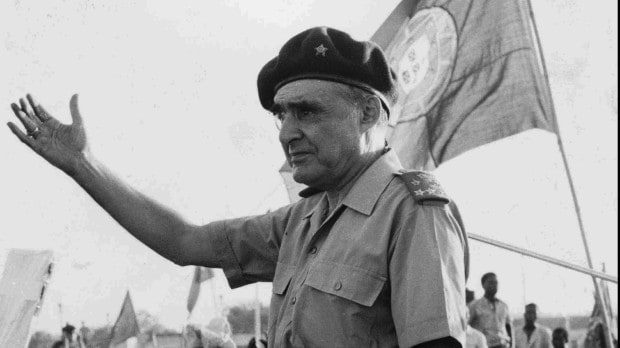 The soldiers were unhappy, but encouraged by the publication of António de Spínola’s book “Portugal e o Futuro” (Portugal and the Future), which was a Manifest opposed to the authoritarian regime and announced a military coup. The young officers started organizing their movement in february of 1974. The Generals Spínola and Costa Gomes were chosen as leaders of the movement. But, in March, the two men were dismissed, but this event marked the definitive breakdown with the regime. A few attempts were foiled, but the movement didn’t back down and the military coup took place.

The operations plan was coordinated by the Major Otelo Saraiva de Carvalho. The signal was given, during the night of April, 24, on the radio by the broadcasting of the song E depois do Adeus. Then, the song Grândola, Vila Morena by José Afonso, was also heard on the radio the first minutes after midnight, which confirmed the order and marked the beginning of the Carnation Revolution. 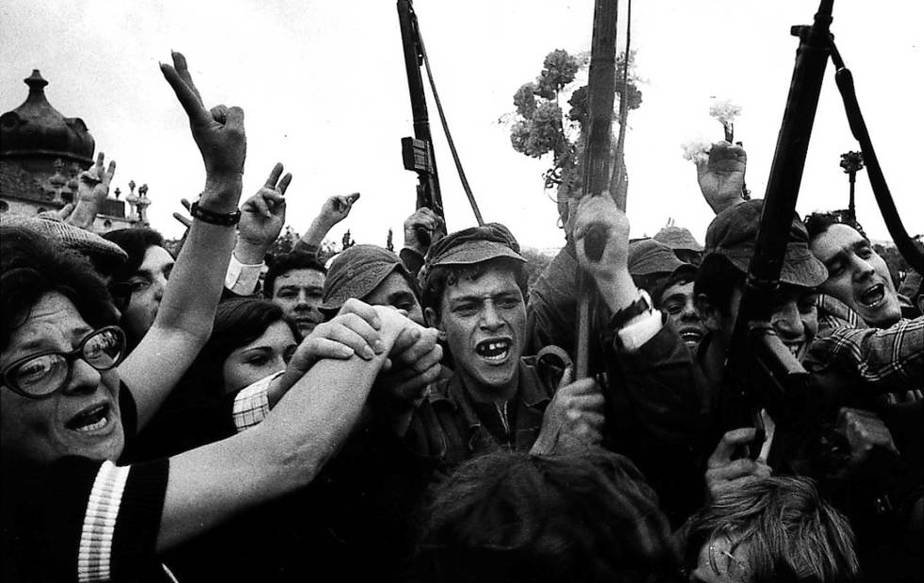 The movement of the armed forces brought the soldiers out of the barracks for them to spread throughout the streets of Lisbon. They seized all the strategic sectors of the city: the radio, the television, the military headquarters, the airport, etc. Drums were put at the Sanctuary of Christ the King, on the left side of the Tejo river, while the air forces flew over the monument. The armed forces also triggered other operations all around the country in different cities, such as Santarém, Mafra, Tomar, Viseu. 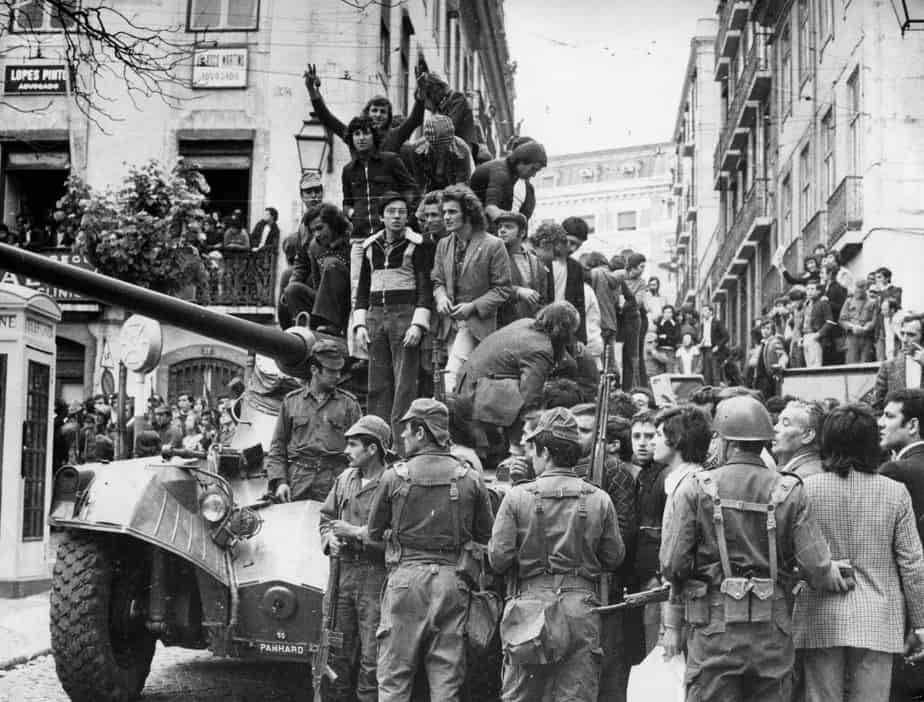 No attempt was made to resist the movement. The former President of the Council, Marcelo Caetano, handed over the power to the General Spínola. In twenty four hours, the Estado Novo collapsed after a dictatorship of more than forty years.

Why was it called the Carnation Revolution?

You’re probably wondering how did this revolution end up with a flowers name. It is believed that on April, 25 of 1974, a lady was walking in the streets of Lisbon, with a bouquet of carnations in her arms. When she saw a soldier, she put a carnation in the pipe of his rifle. That’s when all the soldiers started doing the same. The carnation turned out to be the symbol of his important holiday for the Portuguese. To give a flowers name to this revolution makes perfect sense, not only because of this story but also because it probably was the most peaceful revolution ever, since there was almost no casualties.

My article about the Carnation Revolution is now over! I hope you’ve enjoyed reading this article. If you’re interested in the history of Portugal, I think you will enjoy this article about the Age of Discoveries. Also, I strongly recommend you to join one of our tours in Lisbon. You will get to learn a lot about the Portuguese, the history, the culture and the lifestyle while walking the city with a local. Read all about our tours here. Don’t hesitate to contact us if you need further information about anything. See you soon!