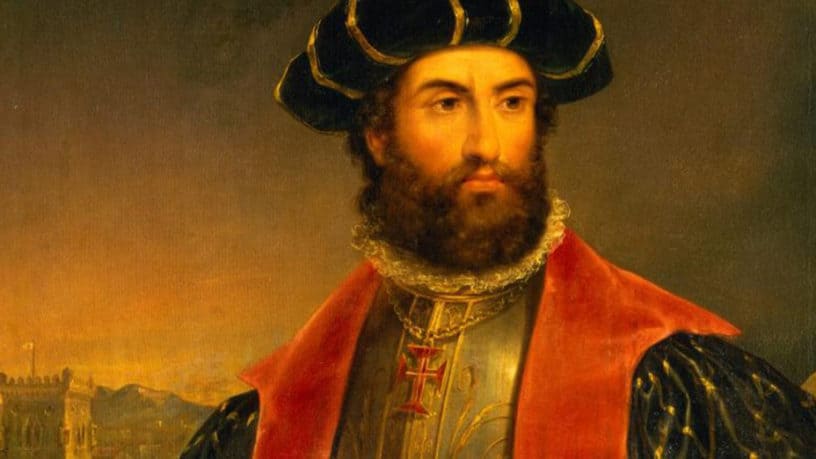 Vasco da Gama is mostly known for uniting Europe and India by sea. He’s a very important figure in the Portuguese history. He traveled and discovered new territories and brought back from his travels new goods and knowledge.

In this article, you will find out more about Vasco da Gama and understand the reason why he is one of the most famous Portuguese explorers.

Who was Vasco de Gama? His early life and youth

Vasco da Gama was born in 1469 in the city of Sines. He was the son of Estêvão da Gama, who also was a navigator.

Vasco de Gama spent almost all his childhood in a sailormen and trips environment enriching his knowledge in this matter.

At eighteen years old, Vasco de Gama was already inlisted as ship crew member in charge of patroling Portuguese ports on the African coast, defending them against pirate ships. Also Vasco de Gama at this young age had already crossed the Mediterranean and visited the city of Tânger, in Morocco.

Vasco de Gama was famous for his personality, being described as violent, rude and relentless. Coming from a poor family, he had an inferiority problem and so his ambitions were to achieve great social status and fortune.

What Did Vasco de Gama discovered? 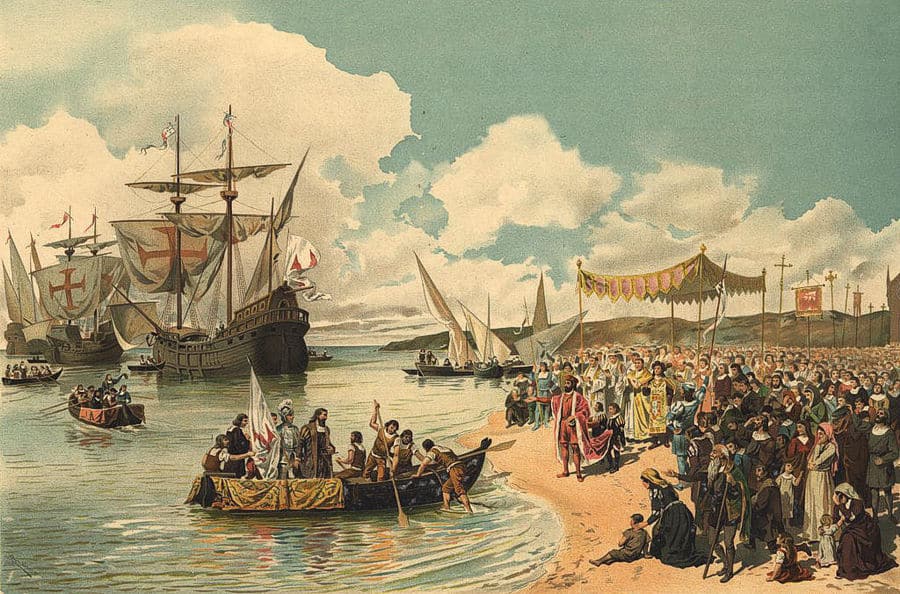 For many years lots of travelers tried to find a direct sea route from Portugal to India to avoid having to deal with merchants and traders from the Mediterranean and Egypt, who were known to impose high taxes for the exchange of their goods.

In July 8th 1497, the King of Portugal ordered Vasco de Gama to discover the sea route from Portugal to India, where he established contact in Calecute, India in May, 17th of 1498, ten months after his departure. Muslim merchants prepared an ambush upon the Portuguese arrival to India, but they failed. Vasco de Gama battled against them and easily claimed the lands to the South East.

With this conquest, the official trade route from Portugal to the lands of the East was finally open, breaking the Arab and Venetians monopoly in the East. He expanded Portuguese trade of merchandise and ideas to the new lands he had found.

He was sent by the King to explore the west 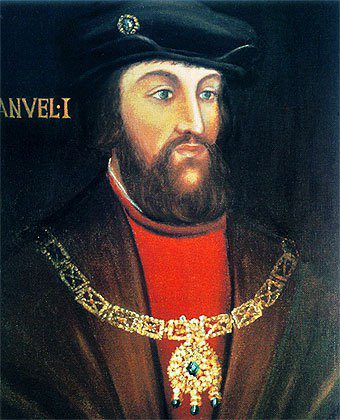 The King Manuel I of Portugal trusted Vasco da Gama to be the leader of an exploration to the west and to serve as the ambassador to the rulers of India as well.

Vasco de Gama was the first person to achieve the status of “Count”, which can be translated to Conde in Portuguese, without being a true blood royal member. He got the title thanks to the many trips and achievements throughout the years serving the King as a Captain of the Charters.

For this mission, he travelled with 170 men and four vessels which were the following ones: São Gabriel, São Rafael, Bérrio, and then, São Miguel which was the ship dedicated for supplies.

Vasco da Gama was known to be brutal 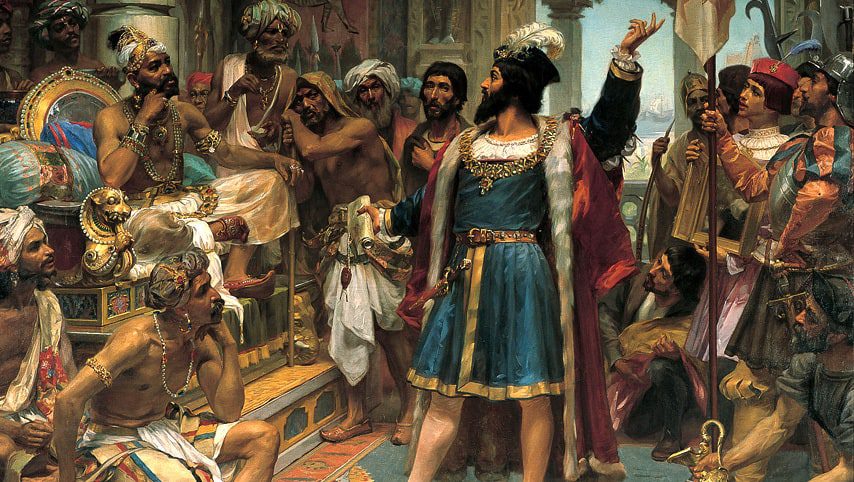 Vasco da Gama was known to be kind of brutal and arrogant. Some traits of his personality led to negative relations with the Muslims.

On his first journey to India, he found out that India had already established trade with many different countries, such as Africa and China. This, and the fact that he had an aggressive temper, complicated the establishment of profitable relations with the natives. Some historians say that Vasco da Gama and his crew were disrespectful towards Hindu shrines and even kidnapped a few locals to be used as interpreters in their next expeditions.

> Learn more about his travels to India in this article.

He was a hero for the Portuguese

Thanks to his explorations and discoveries, Vasco da Gama gained major roles in the military and navy. Once he returned to Portugal, he was definitely seen as a hero by the Portuguese. One cannot deny the fact that he played an essential role in Portugal history.

Vasco da Gama greatly contributed to the wealth of Portugal 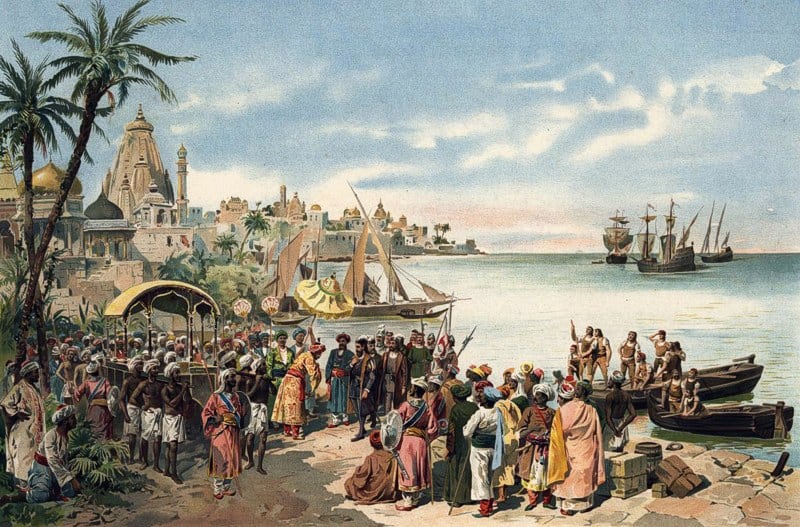 During the fifteenth and sixteenth century, India was still quite a mystery. It was an unexplored land where one could find many fine spices and stunning jewelry. Once Vasco da Gama established a trading relationship with India, he created a new source of wealth for Portugal and gave it power.

Portugal economy was on the rise thanks to him

Vasco da Gama’s expeditions along the coast of Africa and to India improved Portugal’s economy and its expansion of trade. Thanks to him and many other explorers like him, Lisbon was once the greatest trading centre of Europe!

His explorations affected the religious world

One of the main reasons for the Age of Discoveries to happen was the spreading of religion. During Vasco da Gama’s and other explorers travels, many people were converted to Catholicism and were taught the customs of the Christian religion. Throughout the Middle Ages, religion and politics worked together. One wouldn’t work without the other, so many initiatives of the Age of Discoveries originated from the will to expand Christianity.

> Find out more about the Age of Discoveries.

The Europeans got to discover plenty of new goods

Vasco da Gama’s discoveries introduced the Europeans to plenty of new goods. When he returned home, he would bring many unique spices, fabrics, jewelry and many other stuff the people had never seen, smelled, or tasted before!

Following his first trip back from India, Vasco Da Gama wed Catarina de Atade in one of the years. Together, the couple would produce six children: five sons and one daughter. His kids would later continue in his footsteps and take on a few of his titles. According to estimates, the male line of his family passed away around 1747, while the female line would carry on.

Vasco da Gama stopped a ship carrying Muslims on their way from Calicut to Mecca at Madayi on his second voyage to India.

Over 400 people, including women and children, were aboard the ship when it was looted by Da Gama, and they were all killed by fire. Da Gama was promised wealth by the ship’s crew in exchange for their mercy, but he slaughtered them all. His reputation as a villain in some parts of the world was established by this.

One little-known fact about Vasco da Gama is that his father, Estevao da Gama, was a renowned Portuguese knight. His mother was Isabel Sodré, and he and his wife had six kids altogether. The third oldest of five brothers, Vasco da Gama was. He had a younger sister as well.

Vasco Da Gama’s successful expeditions made him a national hero in Portugal, and the Portuguese king lavishly honoured him for his accomplishments.

In 1519, Vasco da Gama received Vidigueira, making him Portugal’s first non-royal count. Additionally, he was named Capito-mor do Mar da Andia. He was named governor of India in 1524, but he died before he could assume the position. Instead, one of his sons would fill the position.

He first noted evidence of trading in Malindi

Vasco da Gama resumed his journey north in February 1498, stopping at the friendlier town of Malindi, whose rulers at the time were at odds with Mombasa’s, and it was there that the expedition first saw signs of Indian traders.

Da Gama and his crew hired a pilot, and because of his understanding of the monsoon winds, they were able to complete the journey to Calicut, which is located on the southwest coast of India. The pilot’s identity has been disputed by several sources, who have referred to him as Gujarati, Christian, or Muslim. Ibn Majid, a well-known Arab navigator, is identified as the pilot in one traditional tale; however, other contemporaneous reports situate Majid elsewhere, making it impossible for him to have been in the area at the time.

So how did Vasco de Gama died?

You might think this great traveller and conquerer died in an honourable way like fighting his way to claim land or defending his own territory back in Portugal, but the truth is he did not.

On 1524, Vasco de Gama was sent to India on his third and last trip, with the intention and order from the King of Portugal, to become the Governor of India, replacing Duarte de Meneses who was known to have ruled India till then in a reckless and desastruous manner.

Even though he arrived safely to Goa, India, he soon became ill from a mosquito bite and contracted Malaria, one of the deadliest diseases of the time in the East. Malaria is the name of the disease and it is very common to contract this disease from mosquitos in places like South Africa, Papua New Guinea and India if you do not take the appropriate vaccine.

Despite the fact of being ill, he was still able to claim his title as Vice-King of India and established order in the lands of the East for the brief time he had. Vasco de Gama died on the city of Cochim, on Christmas Eve, December, 24th of 1524.

The famous work from Luís de Camões was inspired by the trip Vasco de Gama made to India.

You now know 15 interesting facts about Vasco da Gama! If you know more facts about him, feel free to share them in the comments! Also, if you’re interested in Portugal history, I’ve written a few articles you will probably enjoy: one is about the Carnation Revolution, then you also have one about the Age of Discoveries that will allow you to learn even more about this period of history!

Let’s play a little game: while in Lisbon, visit the area of Belém and go to the Padrão dos Descobrimentos. Have a look at the monument and try to spot Vasco da Gama. If you find him, take a picture and post it on the comments or share it on instagram and tag us @discoverwalks!