10 great facts about the Age of Discoveries 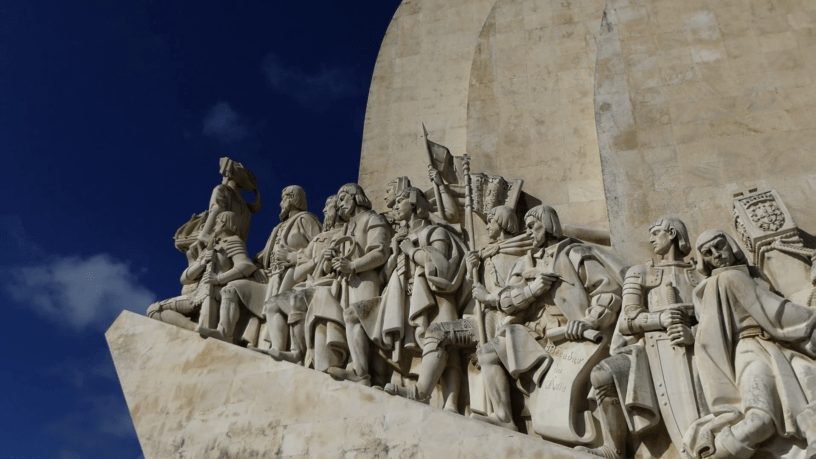 10 great facts about the Age of Discoveries

Portugal is an incredible nation that, despite its small size, accomplished great things. It expanded its domination over several parts of the world through its industry, virtues, values and many heroes that successively served the country.

The Pope Eugene IV granted the Madeira Archipelago to the Portuguese in 1436. Because, in two expeditions, in 1419 and 1420, they had decided to stay permanently in Madeira. As for the Azores, one is still unsure about the date and the authors of the Islands discovery. Without any certitude, the first Portuguese trip to the Azores must have been by a pilot from Algarve, Diogo de Silves. He first recognized the island of Santa Maria, then São Miguel, and then the other five islands of the archipelago. Another name also happens to appear in some history books: a knight of the Order of the Christ, Frei Gonçalo Velho, who is also believed to have found the islands in 1431. It was the true beginning of Portugal maritime expansion.

The spirit of adventure was not the only reason for these voyages of exploration, because as the explorers brought food, wood and plants back, they started to notice the lucrative advantages of these trips. Between 1450 and 1470, Madeira took on great importance for the Portuguese economy, because more than half of its grain food production served for supplying the country of Portugal.

Portugal has few port sites but possesses a large seafront and a nation of fishermen. The Portuguese sailors had an extensive experience of navigation. They ventured to the north and to the south, on waters and coasts that were unknown to the Europeans. After the disasters caused by the Black Death, and the wars of second half of the fourteenth century, the country of Portugal desperately needed to find new resources to feed the population.

Other reasons inspired the Portuguese to explore the world, which were ideological reasons. The spirit of croisade, of chivalry, adventure but also of profit animated the Portuguese of different social classes. The iniciatives of some men contributed to the history of Portugal. Prince Henry the Navigator, the King D. João II, but also the navigators Bartolomeu Dias, Vasco da Gama were some of the most important figures of the Age of Discoveries. In this article, I will introduce you to this era of the Portuguese history sharing 10 great facts about the Age of Discoveries! 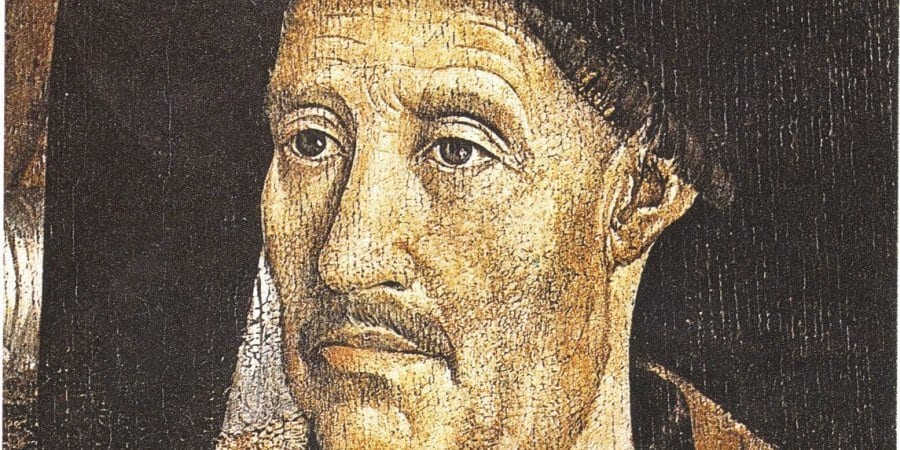 The Holy See granted a few Papal bulls to the King of Portugal. These bulls allowed the Portuguese to initiate their epic travels. These explorations were first for croisade purposes, the appetite for wealth came afterwards. One of these bulls, called Dum Diversas, on July, 18 of 1452, authorized the King of Portugal to attack, conquer, subdue the Saracens, pagans and any unbeliever ennemy of the Christ, and to reduce them to slavery.

Later, the Portuguese were authorized to trade with the Saracens as they wished, as long as they wouldn’t sell them any weapons. At that time, the Church was still in power, so all the major decisions were made by it.

Fun fact nº2: The Portuguese vessels were the best 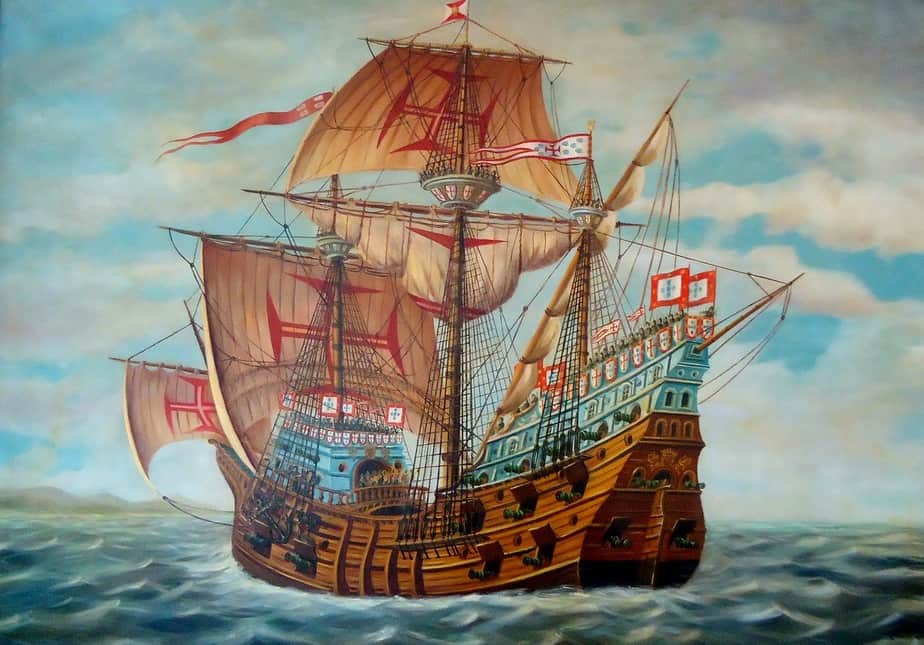 Fun fact nº3: They gathered enough informations to draw a complete map of the winds and Atlantic currents

In 1434, Gil Eanes, a Portuguese navigator, was sent by the King D. Henrique to travel to Africa. He came back to Portugal and announced that the Cap Bojador was not the end of the world. From that date, many reconnaissance trips were organized. In 1434, Gil Eanes and Afonso Gonçalves Baldaia crossed the Tropic of Cancer and reached a river where they found gold. In 1441, Nuno Tristão reached the Cap Blanc. During the next five years, he discovered the whole southern coast and was probably the first to reach the Senegalese coast. Other navigators discovered the Cape Verde, then also discovered the archipelago offshore and named it “Cabo Verde“.

During these years of discoveries, the Portuguese navigators gathered a large amount of information and were able to create a precise map of the winds and of the Atlantic currents, that served the navigators that travelled this ocean after them. 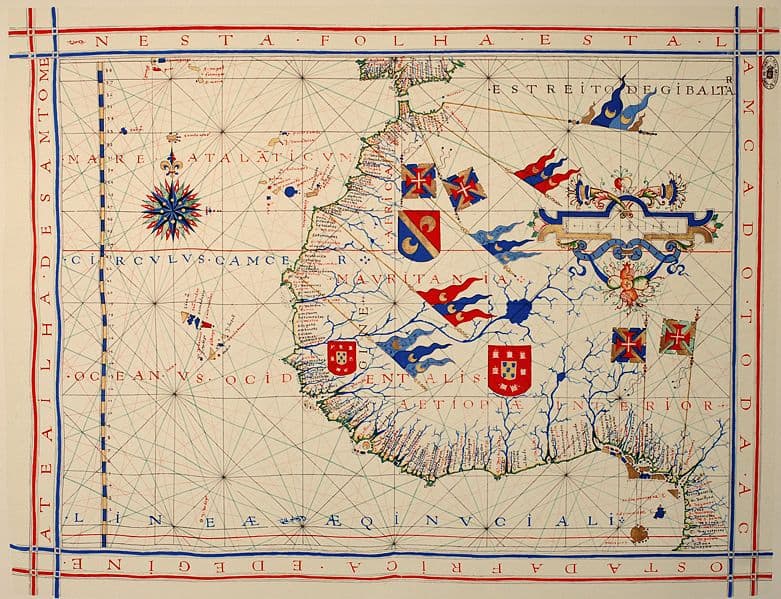 The King John II of Portugal, also known as “the Perfect Prince“, established the principle of “mare clausum” to eliminate competition, which is the prohibition for any foreign vessel, in particular Castilian ones, to enter the waters and the African lands the Portuguese had discovered. To achieve this principle, a political and military domination in the coasts and the Gulf of Guinea was necessary. In 1482, he ordered the construction of the city and the fortress of São João da Mina. It became the main trading centre.

Fun fact nº5: the purpose of the Treaty of Tordesillas

The sharing of the, either discovered or yet to discover, New World, between the two Iberian nations was established thanks to the Treaty of Tordesillas in 1494.

This sharing allowed the rival crown to benefit from the mare clausum principle, but at least removed the other nations, which were France and England, from the competition.

Fun fact nº6: The Portuguese had to face difficulties in the Indian Ocean 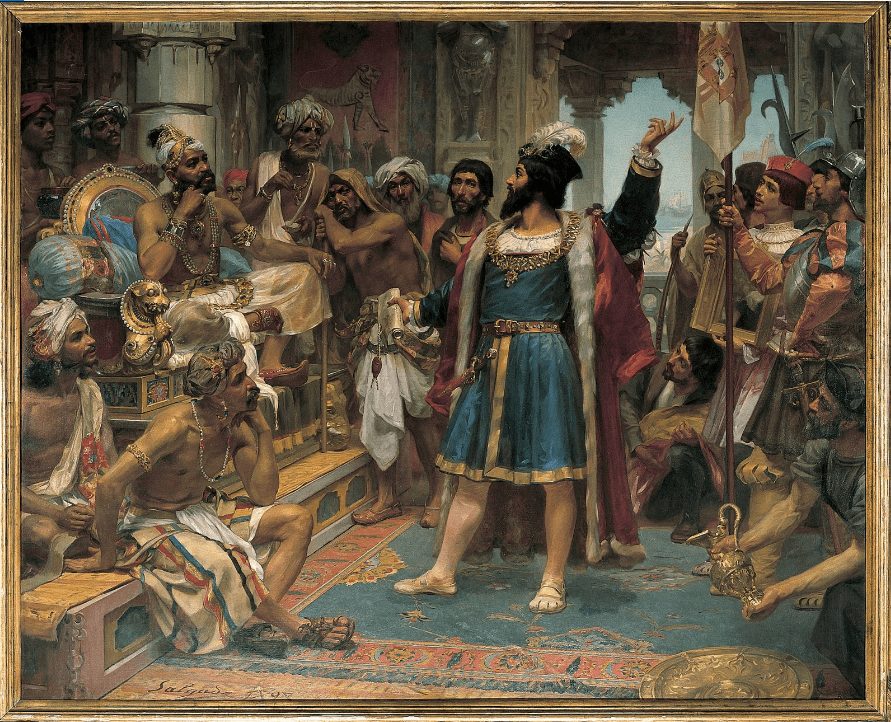 After the death of John II of Portugal, the King D. Manuel was his successor. The navigator and explorer Vasco de Gama had been entrusted with the command of the expedition to India.

Vasco de Gama brought his credentials to the Zamorin of Calicut in India, and also a few samples of spices, gold and pearls to show to the people, so they could show him where to find more. But when the Portuguese arrived in Calicut, they were not received as expected. The Zamorin didn’t take Vasco de Gama seriously, because Asia was accustomed to luxury goods trade, valuable objects and gold. Vasco de Gama returned to Lisbon with a poor shipment of spices.

The King D. Manuel understood that the Portuguese needed to sent gifts worthy of those who were to receive them. But he also felt that the Portuguese needed to present a strong and imposing military and naval force. Pedro Álvares Cabral was the man in charge of the next expedition. In 1500, Cabral set foot in Calicut and this time the initial contacts were promising. The Zamorin demonstrated goodwill when he read the letter of D. Manuel proposing to establish a friendship and trade links between the two nations.

A trading colony was installed, but the Muslim merchants were not in favor of this trading relationship, so both nations had to face the conflicts.

Fun fact nº7: The Portuguese took possession of Brazil in the beginning of the sixteenth century 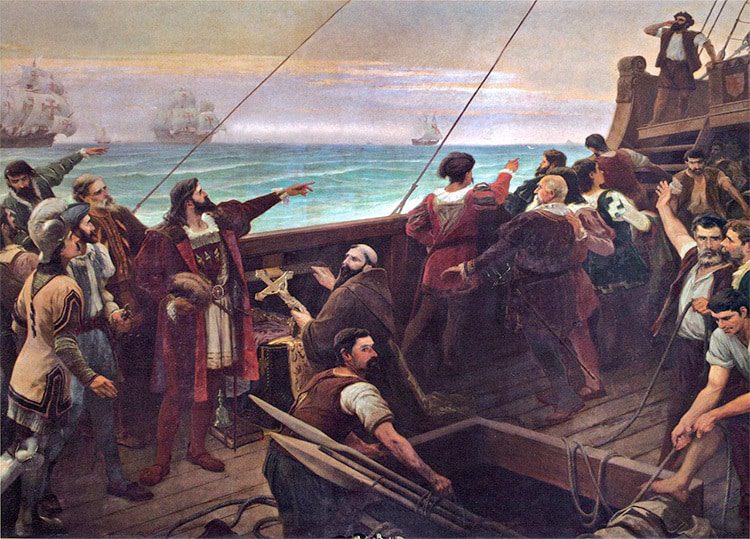 After various interactions with the natives, Vaz de Caminha, a Portuguese knight that accompanied Cabral in his travel to India, concluded that they were as innocent as Adam and that they would be easy to convert and educate. They were a peaceful people and imitated all the moves the Portuguese would make. When the Portuguese kneeled, they kneel as well. Vaz de Caminha asked the King to send a few priests to the Brazilian land, so that the natives could be baptized.

To defend Brazil from the French, the Portuguese Crown decided to send permanent settlers to Brazil coasts to live there and to resist the French attempts. 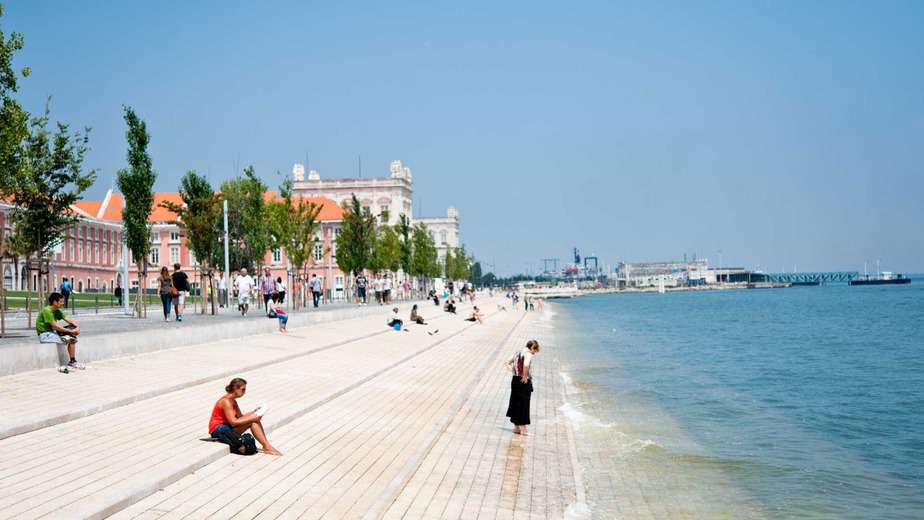 The Portuguese naval power required numerous high quality vessels. Portugal had many lands that needed to be governed and protected, and great vessels were a necessity for these tasks. By 1550, Portugal had about 300 vessels.

One of the most important ports of Portugal was Ribeira das Naus in Lisbon, because it also was a shipyard. All the equipment to shipbuilding and the maintenance of the ships was found in the Armazens of Casa da Guiné e Índia. Ribeira das Naus is the place from where most of Portuguese vessels sailed away for great adventures and exploration. If you happen to visit Lisbon, you need to see this amazing place. It’s one of the trendiest places of the city, due to its charm and unique atmosphere. 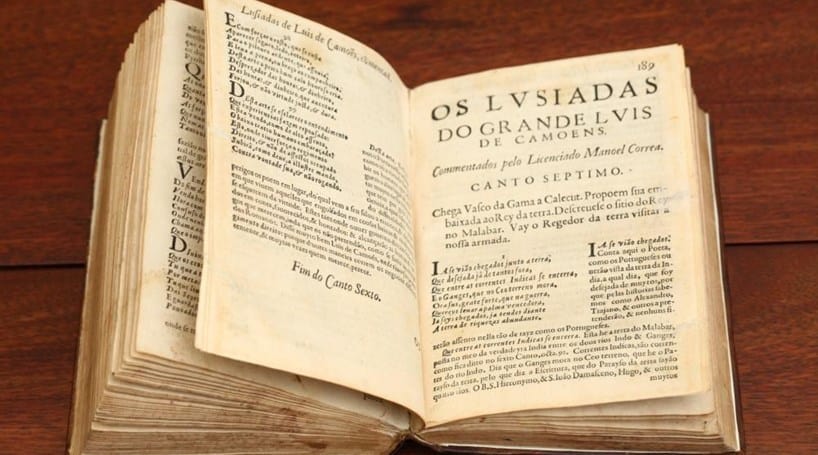 The discoveries allowed the literature, the thought, the science to expand. The Portuguese started questioning their existence, and their relationship with nature and cosmos. The Portuguese society became aware that they were living a new era. Also, a travel literature was born. Navigators, travelers and soldiers used to write and describe all the marvellous things they saw during their trips. This literature caused an intellectual and philosophical thought.

For instance, the nobleman D. João de Castro, concluded that the sensory perception only allows us to identify the appearance of things but not the reality. It does not give us a correct aprrehension of the physical world, because it lacks calculations. He’s the one that determined that the colour of the Red Sea was different not because of the water but because of its sand, stones and aquatic plants.

Sagas, epic stories and poems also started to appear. With Luís de Camões, epic poetry reached its peak. He celebrated the heroic actions of the discoveries, travels and conquests of the Portuguese. Camões expressed the victory of men in an evolving world. His masterpiece deserves to be compared to the works of the greatest poets of all times. For the Portuguese, it is much more than a masterpiece. It nurtured the pride of a nation that traveled the world and its strenght to gain its independence. 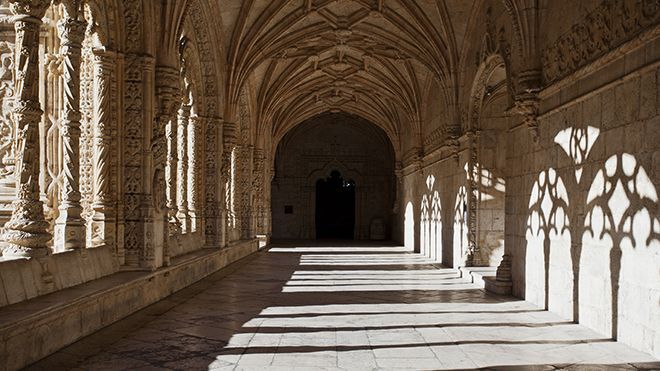 At the beginning of the sixteenth century, a unique architectural style appeared, the Manueline. Some of its decorative features were inspired by the navigations and discoveries.

Our most famous and greatest example of Manueline art is the Mosteiro dos Jerónimos, that was built between 1502 and 1516 in Belém. While in Lisbon, you definitely need to visit this sublime monument.

If you’re interested in Lisbon and Belém, here are a few articles you will enjoy:

My article about the 10 great facts about the Age of Discoveries is now over! Lisbon was once the greatest trading centre of Europe, which is why it definitely is an incredible city to visit. You will love Lisbon, its history, its monuments, culture and lifestyle. While in Lisbon, embrace every experience and learn as much as possible. Learn about Portugal history and its important figures. You will discover many things about the world’s history that isn’t always taught in school. I hope you’ve enjoyed reading this article and I also hope to see you soon in one of our tours! Don’t hesitate to contact us if you need further information about anything!