The Best African Restaurants in London 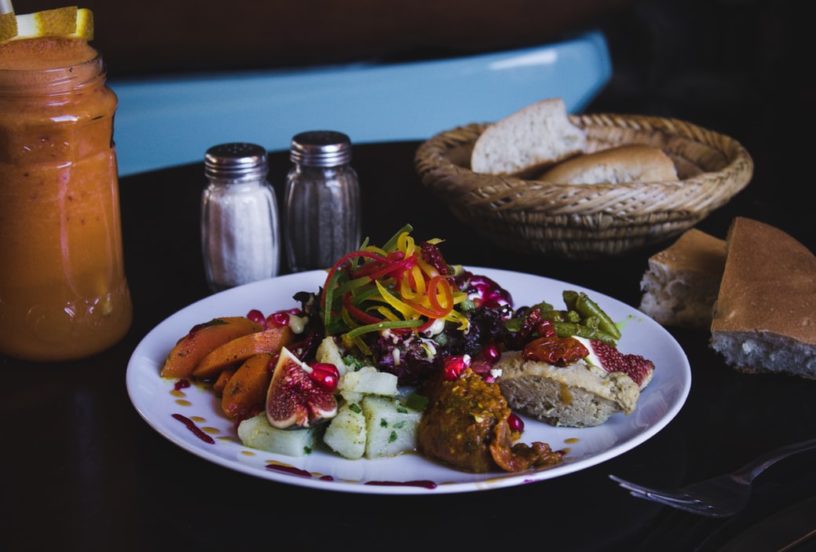 The Best African Restaurants in London

After years of colonialism throughout Africa, Britain is left with a vibrant immigrant community and all of the cuisines from the continent below. You don’t have to travel very far to sample authentic African cuisine from countries like Angola, Mozambique, Egypt and even Tunisia.

As you eat your way through London town, keep an eye out for the following African dining spots. These are all my personal favorites and they all embody tradition, authenticity and ambiance relative to the land of origin. Let’s eat!

Being the country closest to the UK shores, there is a huge Moroccan community living in London. Moroccan eateries are easy to find in the city centre; there is even a Moroccan themed high tea that takes place at Momo in Piccadilly Circus (best explored via a guided walking tour — by the way).

One of the most authentic Moroccan dining experiences is found at the Souk Medina restaurant that is up the road from Momo. 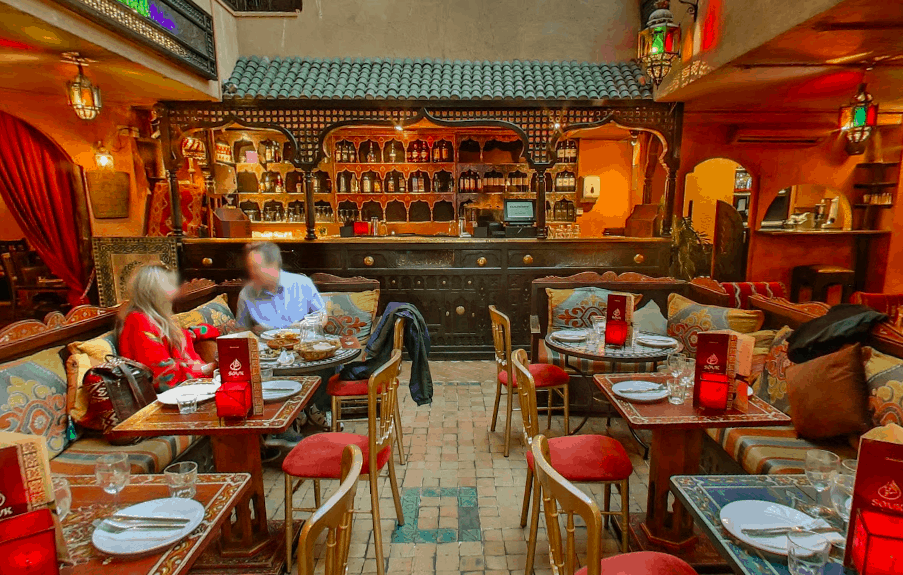 Not only have they perfected the interior to resemble a souk, but the food is spot on as well. You’ll dine amongst lanterns, handmade tiles and exotic fabrics. It’s a transportive space; a break from London for the duration that you are inside. Shisha is available to customers who are interested.

The kitchen does Moroccan tajine and couscous alongside their famous mint tea, imported directly from the homeland.

Have a look for dining deals on UK Groupon, the restaurant works quite religiously with them.

Ethiopian food is probably my top African cuisine. They traditionally dine on many different small portions of curry/stew-like dishes called wats. The wats are served atop a homemade sourdough flatbread called injera.

This cuisine is enjoyed with your hands, and is best experienced as a shared dining experience. Ethiopian food makes use of a lot of vegetable dishes that are naturally vegan, and then tasty meaty dishes as well. 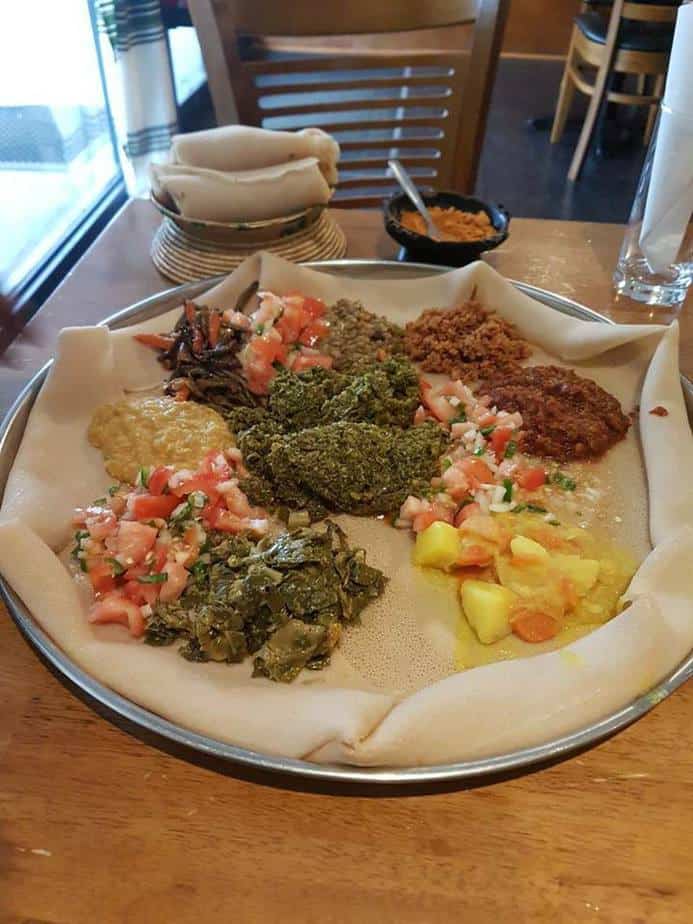 Ethiopian food is widely popular amongst the Brits because of how closely this cuisine resembles curry dining — locals love Indian food and this isn’t far off. Wolkite is one of the top spots in London for authentic Ethiopian dining.

Wolkite imports what they can from Ethiopia directly. This includes specific spices and even Ethiopian beer that you can order during your meal.

This is a brilliant restaurant in London for shared dining, or for when you need to impress someone with your worldly cuisine knowledge. Booking is encouraged if for weekend dinners.

London has more than a few unusual museums; one of them is The Doll’s House Museum in Ealing, and I found this Tunisian restaurant one afternoon while walking home after my tour.

Tunisia is on the northernmost coast of Africa and is a wonderful hybrid of African and Mediterranean foods thanks to its location. There aren’t a lot of places to eat authentic Tunisian food in London, this was a pleasant surprise.

The chef is Tunisian, so everything you eat here is homemade just as one would eat it in the country itself. They serve fresh seafood dishes and fresh baked treats like they do in Tunis. 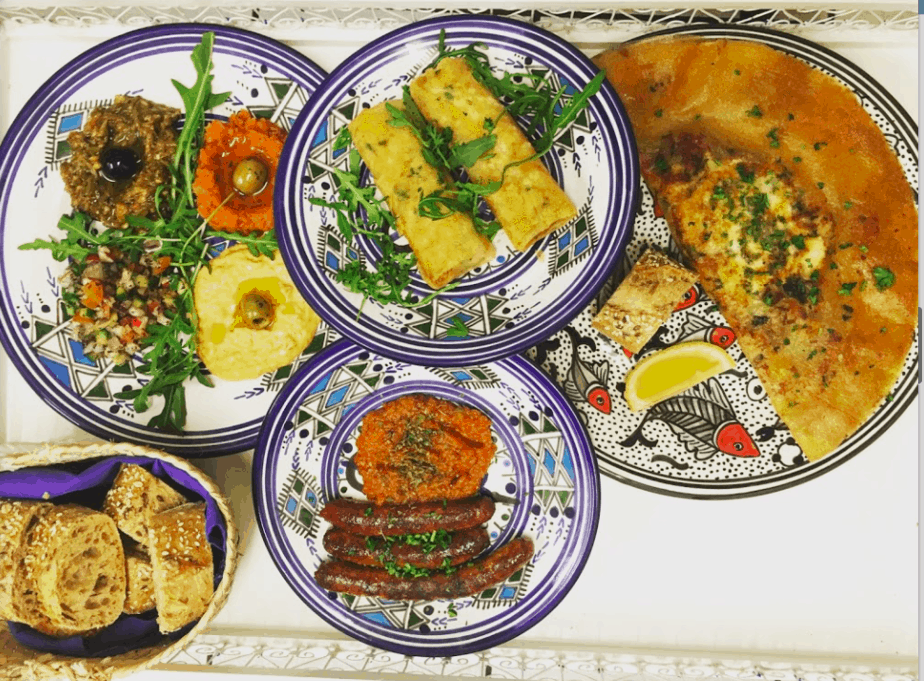 Sidi Bou in London – by Sidi Bou – Uploaded by them

The restaurant does not have an alcoholic menu as of yet, but customers are encouraged to bring their own drinks if they so desire. There is a small corkage fee per bottle.

The menu is very friendly to vegans and vegetarians; the staff are very happy to accommodate any dietary requirements one might have. Undoubtedly one of the best low cost dining experiences available in the city.

South Africa was one of the most significant points of colonization for the Brits. To this day there is a very string migration of people from the south of the continent into London and surroundings.

Traditional South African cuisine involves a lot of meats prepared in a lot of different ways depending on the tribe in question. Most commonly, it is barbecued, but the locals call it a “braai” (pronounced: bry). 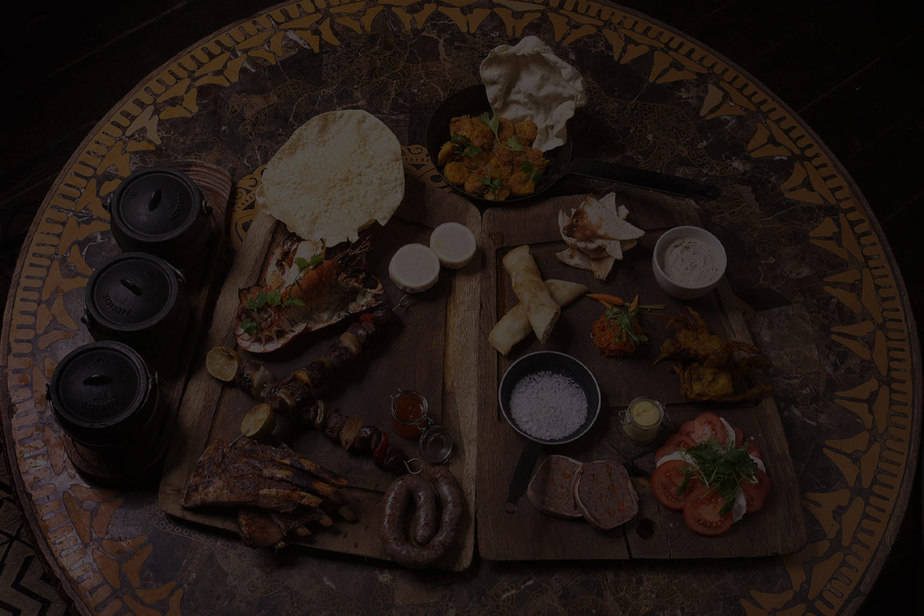 Shaka Zulu in London – by Shaka Zulu – Sourced from their website

One of the millions of South Africans wandering around London decided to bring this cuisine to the city in a restaurant named after an important king who, ironically, fought against the Brits when they came to take the land.

Shaka Zulu is an impressive restaurant with an African menu you won’t find anywhere else. You can try braai’d zebra, kudu, springbok and even crocodile if your heart desires. A meat eaters dream — vegans and vegetarians should probably avoid.

Ghanaian food is another surprising find on the streets of London. Their cuisine is typically starchy and saucy; a combination of grains, meats and gravies that share a plate and eventually flow into one tasty mess.

Sweet Handz sits just below the Emirates Stadium, home of Arsenal Football Club. Thousands of people from around the world come to this part of London each day to see where the magic happens and take their own guided walking tour of the attraction. 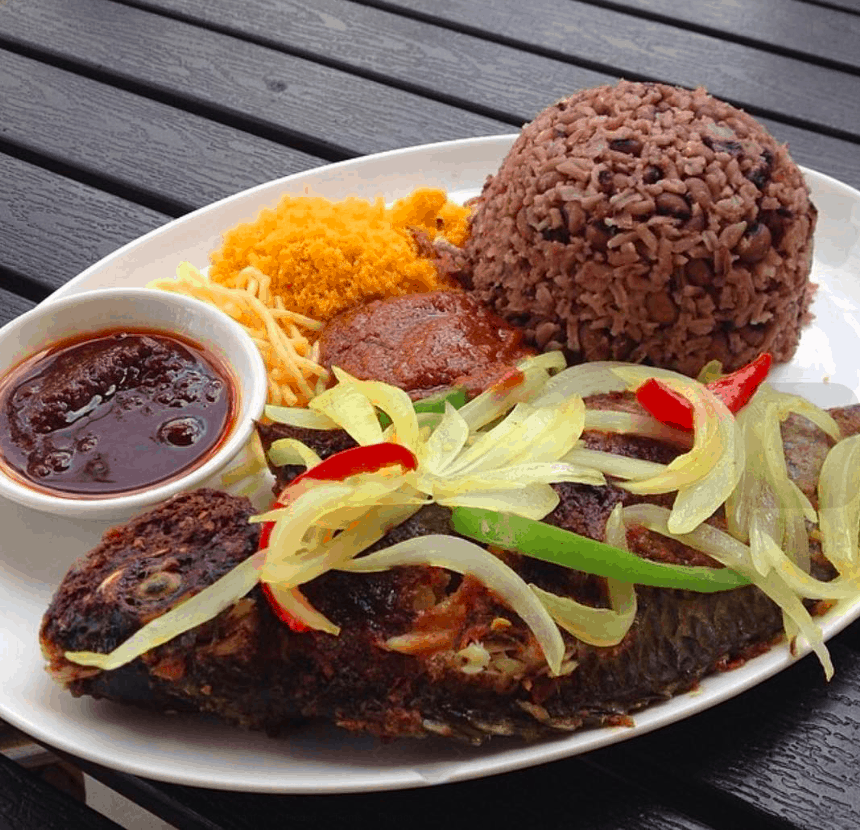 Since not a lot of people in London are familiar with Ghanaian foods, the staff are used to answering a lot of question and being as informative as possible. They are always smiling, always happy; seemingly enjoying the presence of anyone willing to give this foreign food the time of day.