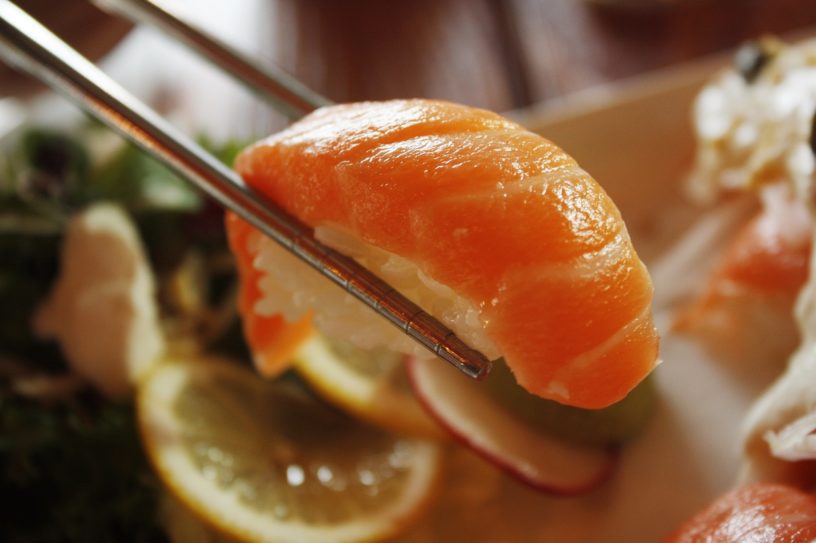 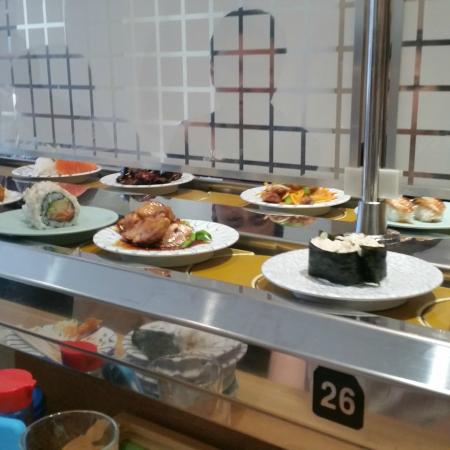 This compact Japanese restaurant is one of the first that comes to mind when thinking about quality sushi trains in London. Both visitors to the capital and locals alike consistently praise their wide range of sushi dishes served in a laid back atmosphere.

It’s so popular, in fact, that you may encounter a queue at lunchtime as hungry tourists collide with local employees on their lunch breaks, so head there outside of lunchtime for a bit more space and quiet. The prices are extremely reasonable for the area, and staff are attentive and friendly. Regulars recommend sitting on the right of the restaurant to get the first pick of the freshest food coming round on the conveyor belt, and the tempura dishes are especially good if you nab them while they’re still piping hot.

The best thing about sushi served this way, as in, no kaiten, on the conveyor belt, is that you can enjoy eating as much or as little as you like, and at your own pace too. Whether you want to relax for a while with friends and savour a range of dishes as and when they arrive, or you’re on your own and are just looking for a fast, convenient quality meal, Kulu Kulu can accommodate you either way. Just don’t forget to enjoy your complimentary cup of green tea! 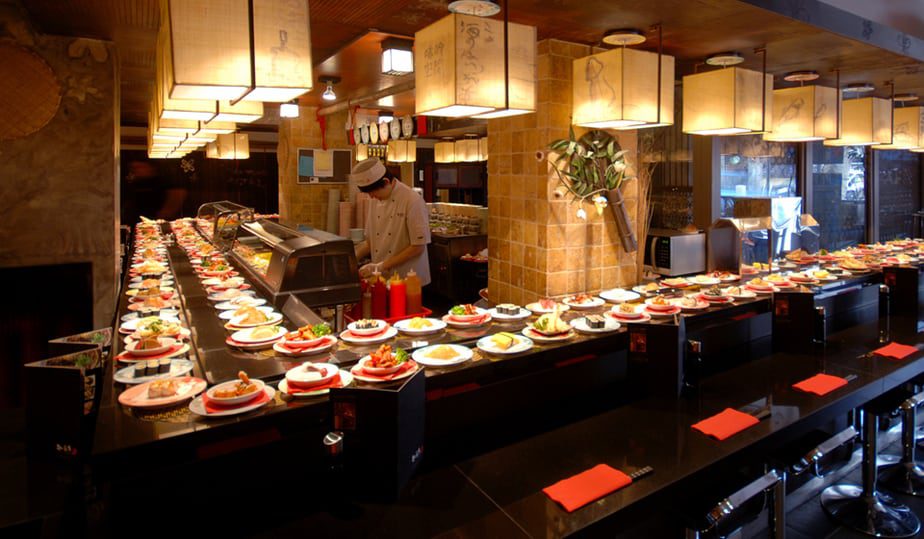 Tucked away just a short distance from Holborn underground station, Sushi Hiroba is a classic, communal eatery serving sushi and hot Japanese dishes, both made to order and from a conveyor belt. The interior of the restaurant is dimly lit, and the decor is traditional Japanese  and minimalist.

The menu is considerably extensive, even for a sushi bar, and you’ll find all sorts on it, from elaborate stews for adventurous eaters, to the universally popular katsu curry. This makes Sushi Hiroba an excellent choice both for Japanese food connoisseurs and those who are new to the cuisine. You’ll find plenty of dishes loaded fresh onto the conveyor belt, so you won’t be waiting long to try something new.

Had enough of eating but don’t want the fun to stop? In the basement of the restaurant you’ll find a karaoke booth, perfect for singing off all that sake. Its location makes Sushi Hiroba perfect for a quick bite before taking in a show at one of the many theatres in the area, and the quick nature of the sushi train means you’re guaranteed a decent meal, whether you have 30 minutes or over an hour. 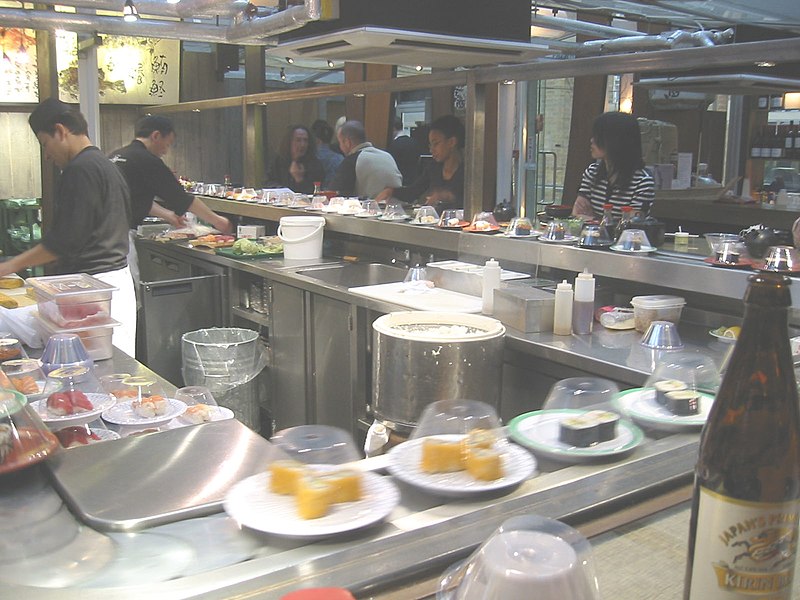 Conveniently located within Liverpool Street Train Station, Moshi Moshi is a perfect sushi bar for refueling after a long train journey, or grabbing a quick bite before embarking on a trip out of London.

The restaurant proudly carries the award of London’s first sushi restaurant to use a conveyor belt, and all its classic dishes travel around it, beautifully presented. Whatever dishes you choose, you can be guaranteed that they will be super fresh, and for ultimate freshness the restaurant even offers a catch of the day meal. And the best part is that it’s a sushi feast which you can enjoy with a clear conscience.

Moshi Moshi is consistently rated among London’s most sustainable restaurants, and sustainability is top of their list when it comes to their business values. All wild caught fish is sourced outside of mass industrial fishing techniques, using smaller harvesting such as pole and line catching. If the fish is farmed, it is done organically and in small batches.

Their meat is also grass fed and free range. Moshi Moshi pride themselves on respecting staff, customers, and the environment, and you’ll easily be able to tell all that from just one visit.

Originating in Copenhagen, the trendily named Sticks ‘n’ Sushi became an instant hit in Denmark’s capital and soon became one of their most successful and popular restaurant chains.

Since then, they haven’t been doing too bad here in London either since crossing the channel and expanding to several locations around the city. They market themselves as ‘a sushi restaurant even for those who don’t like fish,’ and they do this by offering an impressive range of both sushi and non-fish based dishes.

The inspiration for these is taken partially from Japanese cuisine, and in part from the restaurant’s Danish roots. This fusion between Asian and Scandinavian cuisine makes for some deliciously unusual dishes, such as shake carpaccio, and chiizu maki.

You can enjoy all this in the sleek, chic interiors that the chain is best known for, again combining Danish minimalism with classic Japanese touches. The menu of small plates, yakitori sticks and sushi dishes encourages sharing and sampling, making this an extra fun and social place to try new foods. 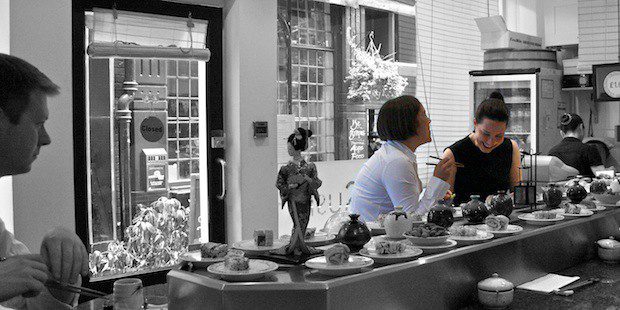 An unassuming but high quality sushi bar, Yazu Sushi prides itself on quality dishes made from fresh ingredients. You’ll find a wide selection of favourites on the conveyor belt as it moves slowly past you, such as California Hosomaki and Suzuki Nigiri. Make sure to sample the kimchi salad, as it’s known to be one of the healthiest dishes in the world.

The most interesting dishes come from the chef’s specials, which are updated daily with whatever’s freshest. It’s located not far from Buckingham Palace and Green Park Station, so expect a crowd made up mostly of tourists and some local office workers. That doesn’t detract from the fun, relaxed vibe however. The restaurant is on the smaller side, making for a cosy meal for a small group, or there’s also the option to take your sushi away if you prefer a bit more space elsewhere.

If you fancy exploring the area around the restaurant, make sure to take a look around Shepherd’s Market, an elegant Victorian piazza situated away from the hustle and bustle just a few streets away. You’ll find stalls, shops, eateries and regular events, perfect for treating yourself or buying gifts to take home.