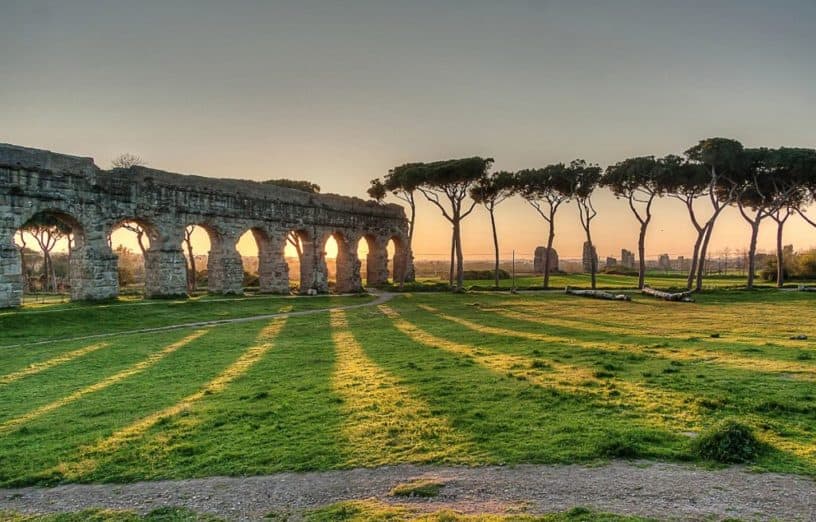 Rome is one of the cities with the highest density of historical sites. Since the Ancient Age, it has been a melting pot of cultures, populations and history. There is no place you can visit in the Italian capital where you don’t stumble upon some ancient ruins or monument. Here I will introduce you to 10 historical facts of Rome which may help you enjoy even further your next visit of the city! 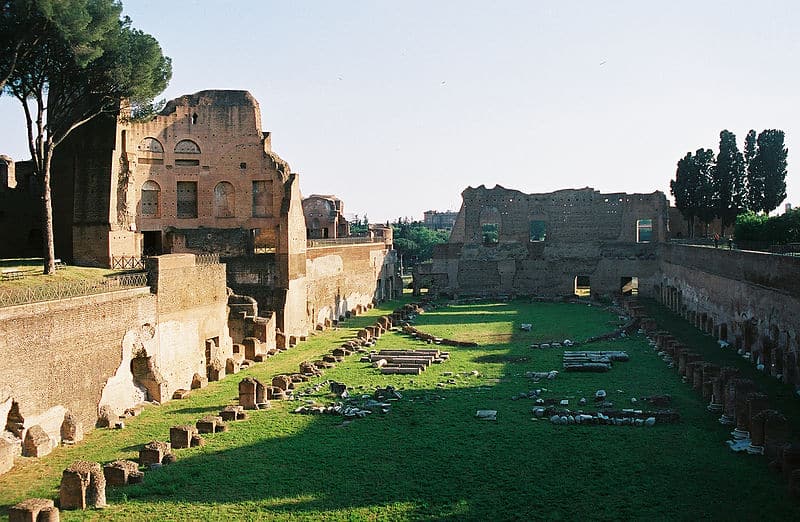 As it is well known, Rome was built on a hilly area. The Palatino is by far the most important among the original seven hills on which Rome was built upon. According to the myth, it was here that Romolo decided to found Rome. The myth is confirmed by historical findings: archaeological excavations revealed that the area has been inhabited since 1000 B.C.

During the Golden Age of the Roman Empire, it became the area chosen by most emperors to build their palaces. Today, it is a giant archaeological site: from the Roman Forum to the Domitian Palaces, this hill is one long, open-air museum.

2. The Pantheon and the Celebration of the Roman foundation 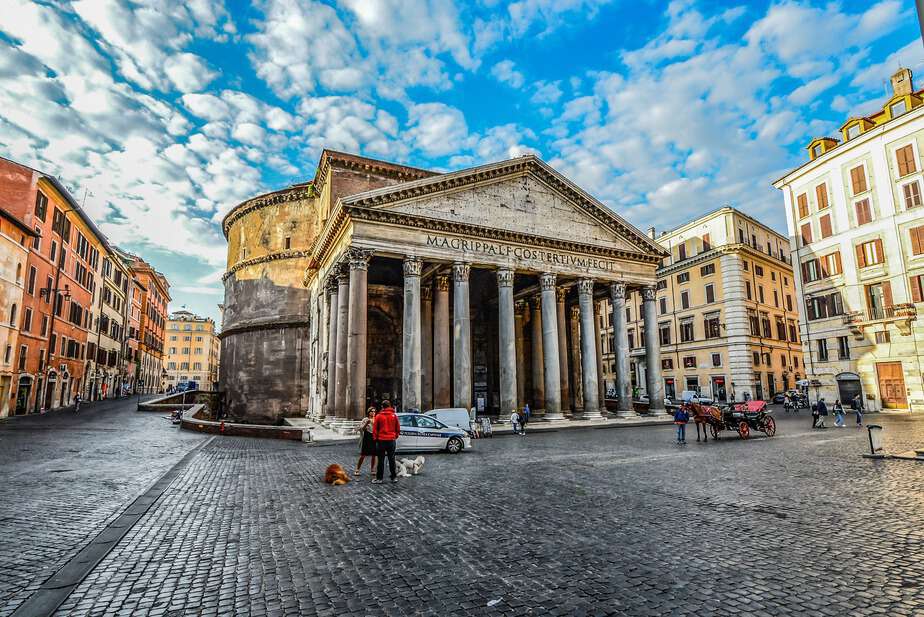 The Pantheon in Rome, image by Kirk Fisher sourced from Pixabay

Connected to the foundation of Rome is one of the oldest traditions of the city, which takes place in one of the most peculiar monuments of the Eternal City: the Pantheon.

This monument is well known for its peculiar structure, but few know that the circular opening in the middle of its dome serves the function of a meridian. On April 21st, in fact, the sunrays, hit the gigantic door of the Pantheon, passing through the hole in the dome.

This fact is not casual, as April 21st is the date considered by the Ancient Romans as the date of the city foundation.

The Pantheon is exactly where this event was celebrated during the Roman Empire, and still today, if you visit the monument on April 21st, you will find actors and academics that bring back to life this tradition with costumes and historical reconstructions.

3. The streets of Rome 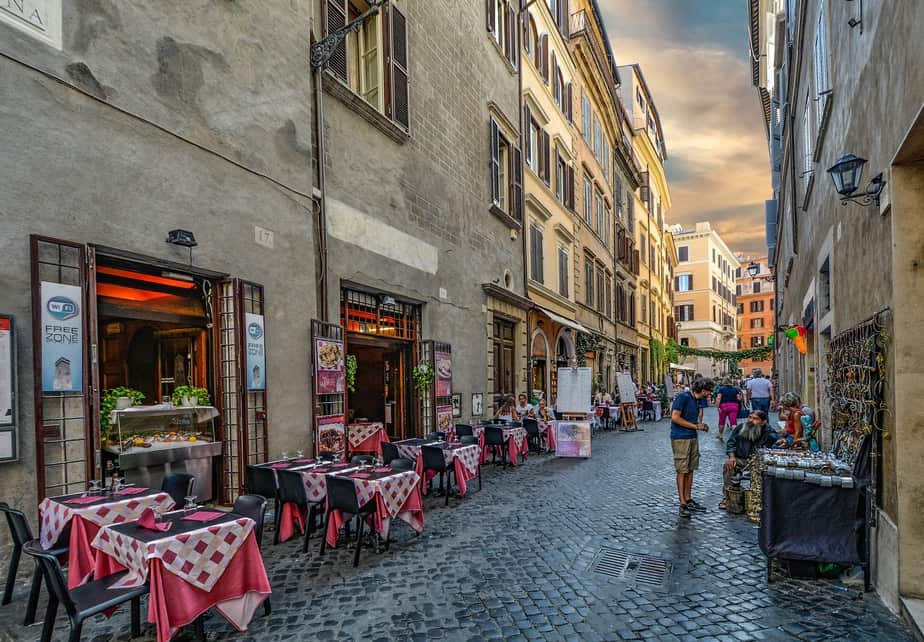 Street and cafés in Rome, image by Kirk Fisher sourced from Pixabay

“All roads lead to Rome” is a well-known way of saying in Italian, which may seem pretentious, but finds its roots in history. The Ancient Romans were constantly active in the expansion not only of the territory, but of its infrastructures as well.

As a result, many of the main roads you can find still functioning in Italy, have their construction originating in the Ancient Age. One of the most famous among those roads is the “Via Aurelia”, which now connects the Italian capital city all the way to France.

A peculiar aspect of these infrastructures is that their mileage is always counted from the very same spot: the “Milliarium Aureum” or Golden Milestone. As of today, its position is still debated, as only the remains of a marble base remain, just next to the Temple of Saturn, in the Central Forum of Rome.

Few know that near one of the most modern areas of the City, the Termini train station, there is one of the few still standing parts of the most ancient ring of city walls.

The very existence of the Servian Walls, so called in connection with the king Servio Tullio, who completed their construction, was debated until archaeologists started finding some parts of it.

As of today, you can still see some sections of the Wall scattered around the city: from the previously mentioned section in Piazza dei Cinquecento, near the Termini Station, to the part that was cut to make way for Via Carducci, the road that goes all the way to Barberini Square. If you ever have a change to encounter these pieces, remind yourself that they have survived more than 2500 years to make it to this day. 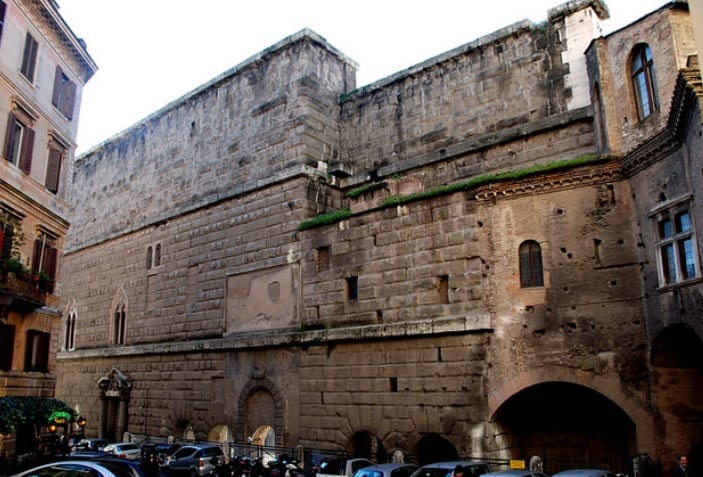 The wall separating Suburra from Foro, image by Bruno Brunelli sourced from Flickr

The neighborhood of Monti is today considered to be one of the most characteristic and historically dense neighborhoods in Rome. Its alleyways and stone paved roads make it look like it’s been carved out of stone.

Nonetheless, at the times of the Ancient Roman Civilization, it was one of the poor and infamous areas of the city. It was just outside the area of the monuments but still, it was mostly made of Insulae: huge buildings filled with small apartments.

Its ancient name was Suburra, which even today remains a word used by Italian citizens to describe the areas of the city affected by poverty and criminal activities.

6. The Roman Republic and the Gianicolo

Night view from the top of Gianicolo hill. image sourced from Civitavecchia Portmobility.it

Few people outside of Italy know that there has been a revolution in Rome, which led to a brief republican experience. In 1849, a group of revolutionaries subverted the Papal reign on Rome and governed on the city for about six months, before the French army invaded the city to re-establish the papacy.

The clash between the revolutionary and the French armies culminated in a battle for the conquest of the Gianicolo hill, which lasted for almost a month. The leftovers of the struggle for the independence of Rome can be found throughout the city even now.

On the stairs of the “Palazzo Colonna”, for example, a cannon ball has been left exactly where it landed during one of the bombings of the French army.

7. The Capture of Rome 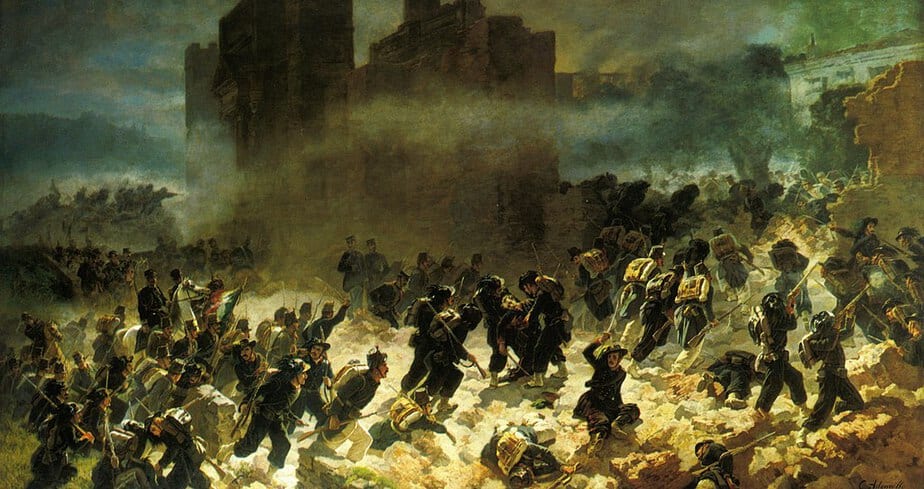 Nonetheless, the reunification of Rome to the newborn Italian State was only a matter of time and in 1870 it became a reality. The papacy rule on the Eternal city saw an end on September 20th of that year, when the Italian regal forces managed to breach the walls of the city and invade it.

The capture of Rome is an episode of particular significance for the Italian history, and the episode of the Breach of Porta Pia is still preserved in the National memory. Near Porta Pia, in fact, you can find the Museum dedicated to the history of the Italian Bersaglieri (Marksmen, in English), the special corps that were protagonists of the battle for Rome.

Many of the biggest monuments and squares have been radically changed during the fascist period.

If you ever plan to visit the area of the Esquilino and go to take some pictures of the Colosseum from there only to end up walking through the breathtaking views of Via dei Fori Imperiali to enjoy an ice-cream near Piazza Venezia, remind yourself that the walking paths you’re taking were completely rethought and rebuilt during the Thirties.

One of the most monumental monuments Mussolini decided to build is what is called Colosseo Quadrato (meaning Square Colosseum). It was built in the EUR neighbourhood, one of the most modern areas of Rome, which is a strongly suggested visit if you want to see a more modern side of the city.

This monument was supposed to be the hosting building for the 1942 Expo, which never took place because of the war. Resembling the structure of the Colosseum, but within a squared shape, it is one of the key examples of how Rome was redesigned by the fascist government to try to connect the tradition and history of the city with the modernity of the 20th Century. 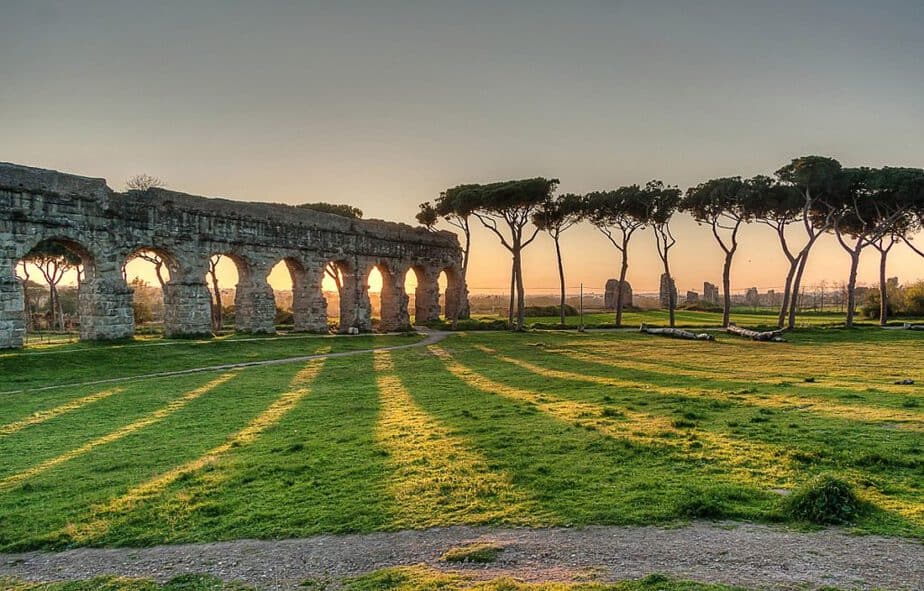 One of the favorite activities of tourists and local citizens alike, is that of visiting one of the many beautiful parks of Rome. The parks make this city one of the greenest in Europe.

From the most famous, Villa Borghese, notorious for its statues and monuments, to Villa Ada, which resembles more a forest than a park, these outdoor spaces are the center of cultural and musical activities all throughout the summer.

Nonetheless, not many know that Rome has some of its most beautiful green areas on the outskirts of the city, and that many of those parks do not only have beautiful natural landscapes to offer, but are the host of some of the most breathtaking pieces of architectural history in the city.

Parco degli Acquedotti is probably the most important to visit on your next trip to the eternal city. With its ancient aqueducts and Roman villas, it has been the location of many movie-scenes, most famous of all the opening sequence of Fellini’s La Dolce Vita. 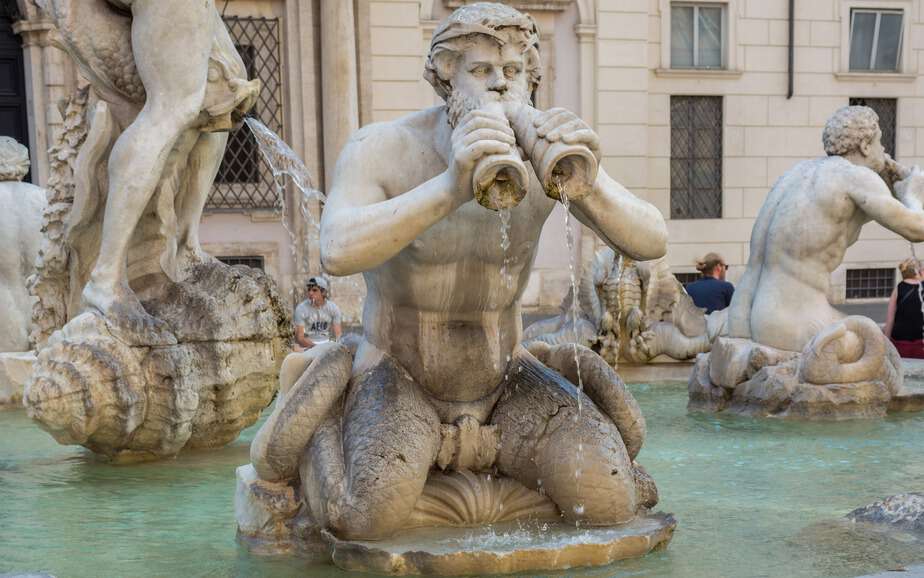 Apart from the parks, there is another sector in which Rome records staggering numbers: there are more than 2000 fountains in the city. Many may think that the Romans where simply in love with water, and this is partially true (they even had a god just for the water sources: Fons).

Nonetheless, this overwhelming presence of fountains is also connected with the fact that as Rome was expanding, it was necessary to control the water sources close to the surface, so that they wouldn’t damage the constructions.

In addition, the governments that established in Rome quickly understood that the access to water reduced the risk of epidemics and established many plans through the centuries to keep expanding the water infrastructures even inside the homes of its citizens. Rome was one of the densest cities in Europe before modernity, and the fountains are a symbol of its expansion.

Did you know all these facts already? Well be sure to go and meet with history in person on a visit to magnificent Rome!

Giovanni is a researcher and is very passionate about travelling.
He loves Rome, its alleyways and its large avenues. Wherever history meets contemporaneity, he goes to find inspiration and beauty. 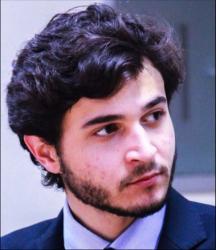 Giovanni is a researcher and is very passionate about travelling.
He loves Rome, its alleyways and its large avenues. Wherever history meets contemporaneity, he goes to find inspiration and beauty.