Things to do from Montmartre to the Champs Elysees

Things to do from Montmartre to the Champs Elysees

If you’re visiting the right bank of Paris, you will probably be wondering what are some of the things to do from Montmartre to the Champs Elysees. Both these landmarks are situated in the Right Bank of Paris. The Seine river divides Paris into two parts, the Right Bank and the Left Bank. The Left Bank is associated to the intellectual and religious aspects of Paris, while the Right Bank is the center of business, and also houses most of Paris greatest landmarks, such as the Arc of Triumph, the Louvre Museum, and the trendy Marais neighborhood.

If you plan on walking from Montmartre to the Champs Elysees, you will get to truly experience the Right Bank and visit plenty landmarks of the city you would be missing if you’d take the metro! It takes about an hour to get from one place to another without stopping. If you take a few detours and visit a few places before getting to the Champs Elysees, I think it will probably take about half a day. But it’s definitely worth it! I’ve written another article that is kind of similar to this one, it is about some of the best things to do from Montmartre to the Eiffel Tower! It covers a longer route! Also, if you don’t feel like exploring the city on your own and rather visit Paris in the company of a local guide that knows the city like the back of his hand, join one of our tours! 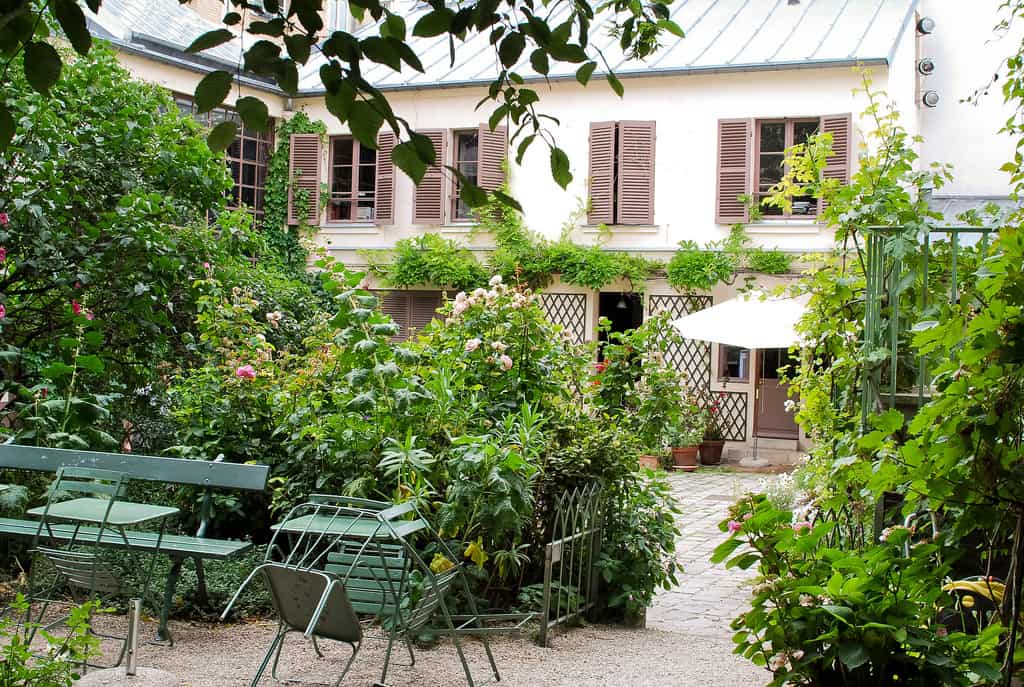 The Musée de la vie romantique ( which is the Museum of Romantic Life in English) used to be the house of the Dutch-French painter Ary Scheffer. It is located in a lovely place in Paris 9th district. Its inner yard, its garden and its ateliers preserved all its charm. Ary Scheffer used to receive plenty of important figures such as Delacroix, Rossini, Sand, Chopin, and Dickens.

George Sand used to come very often to Ary Scheffer’s house. So, on the ground floor of the museum, some of the souvenirs of George Sand are exhibited. Her paintings, drawings, furniture, jewellery were offered by her granddaughter Aurore Lauth-Sand in 1928.

On the top floor, the rooms pay tribute to the memory of Ary Scheffer and of the philosopher Ernest Renan who was his nephew by marriage.

You will be mesmerized by the content of the museum. At the Musée de la vie romantique, you will spend a lovely moment in a charming place. The artists that have walked the rooms of the museum have left amazing histories and memories that are seen through the objects and pieces of art. The museum will surely inspire you! Located at 16, rue Chaptal, it is open from tuesday to sunday. It opens at 10 am and closes at 6 pm. 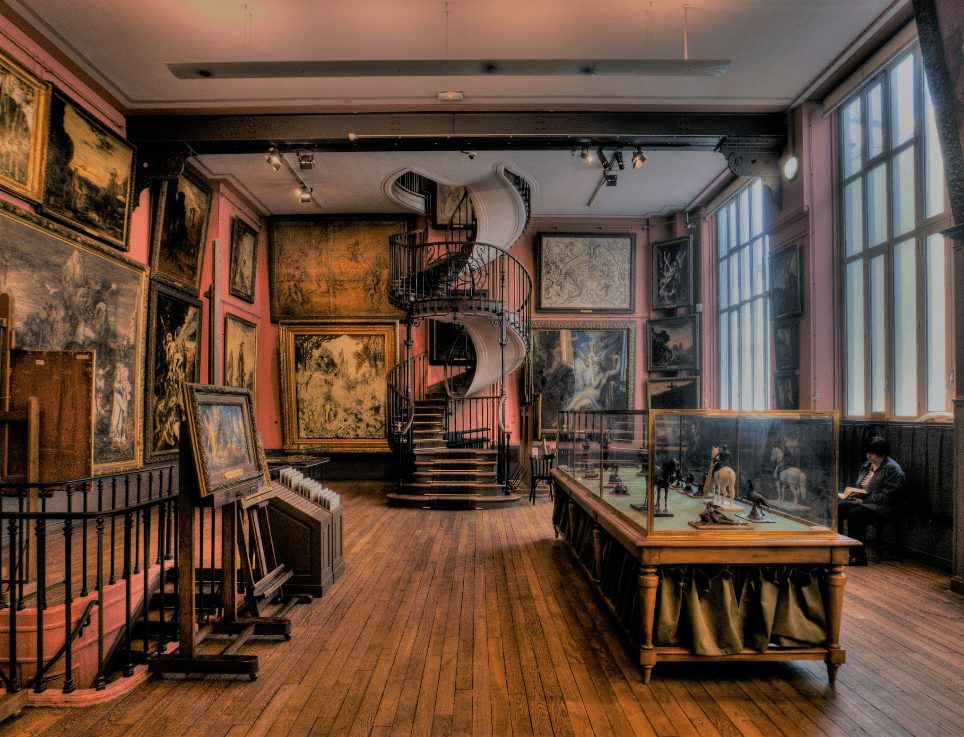 Do you know who Gustave Moreau is? He was born in 1826, died 1898 in Paris and was buried in the Montmartre Cemetery. Moreau is a very important figure of the Symbolism art painting. All his works are kept in the Musée national Gustave Moreau, which is why if you love this painter or are simply curious and love art, this place is definitely a must! You will get to enjoy a quiet moment in a museum admiring incredible paintings. If you want to know more places off the touristy path, check this article about the best secret museums of Paris!

Attend a performance at the Palais Garnier 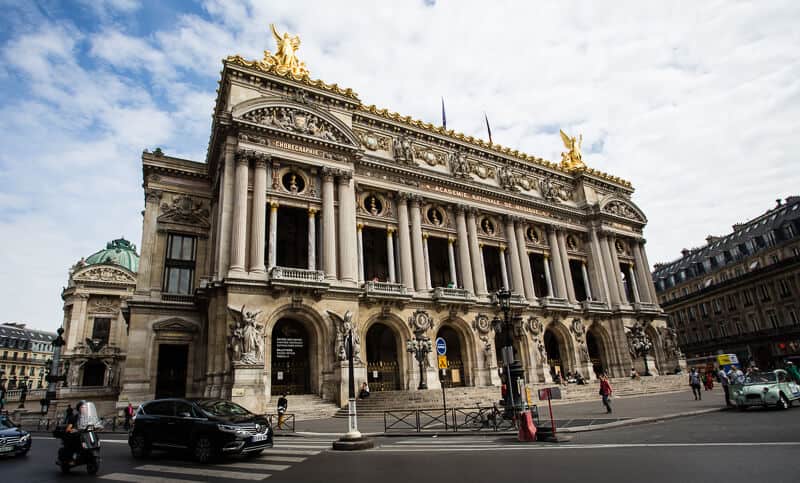 The Palais Garnier is one of the most important monuments of Paris. It was built during the great changes the city went through by order of Napelon the III and the Baron Haussman. The Garnier Opera house of Paris gathers different arquitectural styles, such as neo-baroque and Italian renaissance. The Palais Garnier is a masterpiece. Its façade is filled with sculptures that scandalized the puritans of the time and its interior decoration is mesmerizing!

If you want to visit the Palais Garnier without attending a perfomance, you can. The tickets for adults will cost 11 euros. However, if you have some spare time, you should definitely try to attend an opera show, because it simply is an amazing experience! Note that you should dress properly.

I strongly advise you to join our Paris landmarks tour, because you will get to know a lot more about this majestic place! 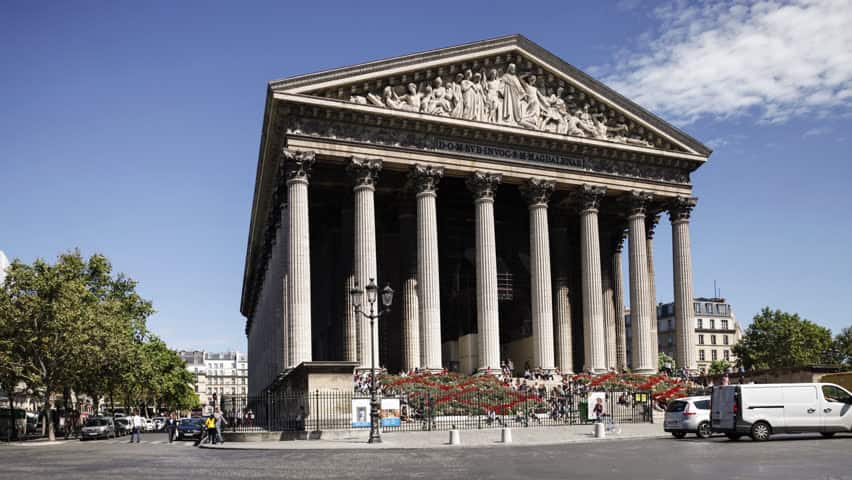 In 1806, Napoleon Bonaparte decided to build a temple to honor the soldiers of his army and to pay tribute to their bravery and their victory. The church kind of looked like a Greek temple. Nonetheless, Napoleon gave up on this project in 1813.

After the fall of Napoleon, in 1815, the monarchs went back to power. The king Louis XVIII took up the project of the Emperor and decided to go on with the construction of the church and dedicate it in the memory of his brother, the king Louis XVI and the queen Marie-Antoinette, who were both beheaded at Place de la Concorde during the French Revolution. In 1830, another revolution established a constitutional monarchy, with the king Louis-Philippe in power. He ordered the resume of the church’s construction but without associating it to the memory of Louis XVI.

It is open everyday from 9.30 am to 7 pm. It is not as famous as the Notre Dame Cathedral but it is important as well. The Parisians love it! From the stairs of the church, you get to see the Luxor Obelisk that is on Place de la Concorde. If you pick the right time and the right angle, you can take awesome photos! 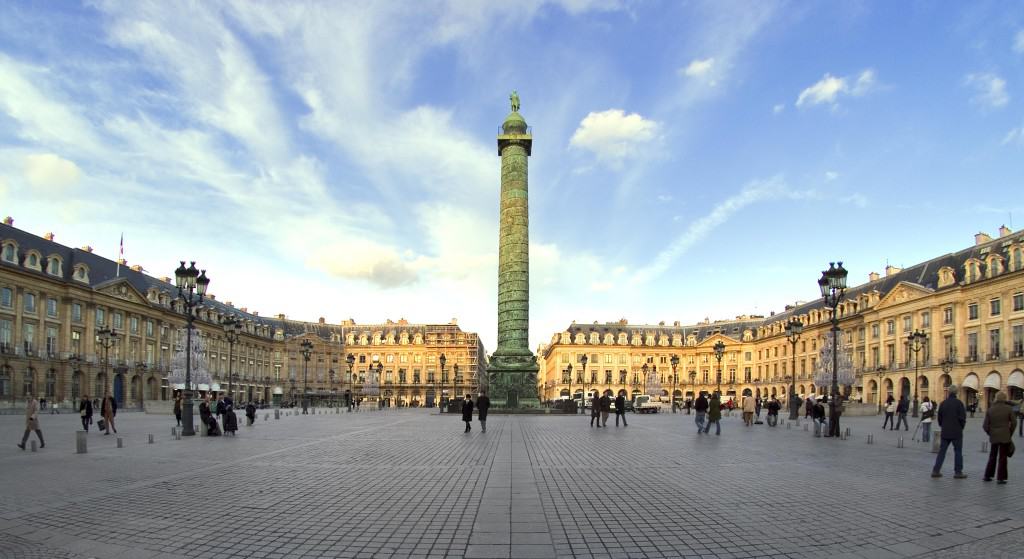 The Place Vendôme is probably the most luxurious square of Paris. In the stores around the square, shiny rubies, diamonds and expensive watches sparkle in the showcases. At Place Vendôme, you will also see the Hotel Ritz. In the neighboring streets, there are gourmet restaurants, five stars hotels, expensive fashion brands stores, among other luxurious things that will make you dream of living an extravagant life in Paris.

The column was built by order of Napoleon to celebrate the victory against the Austrian and Russian armed forces. It was with the bronze of the cannons that were taken from the enemies. Inspired by the Trajan’s Column of Rome, it is 45 meters tall. At its top, there’s a statue of Napoleon.

Have a romantic walk at Jardin des Tuileries 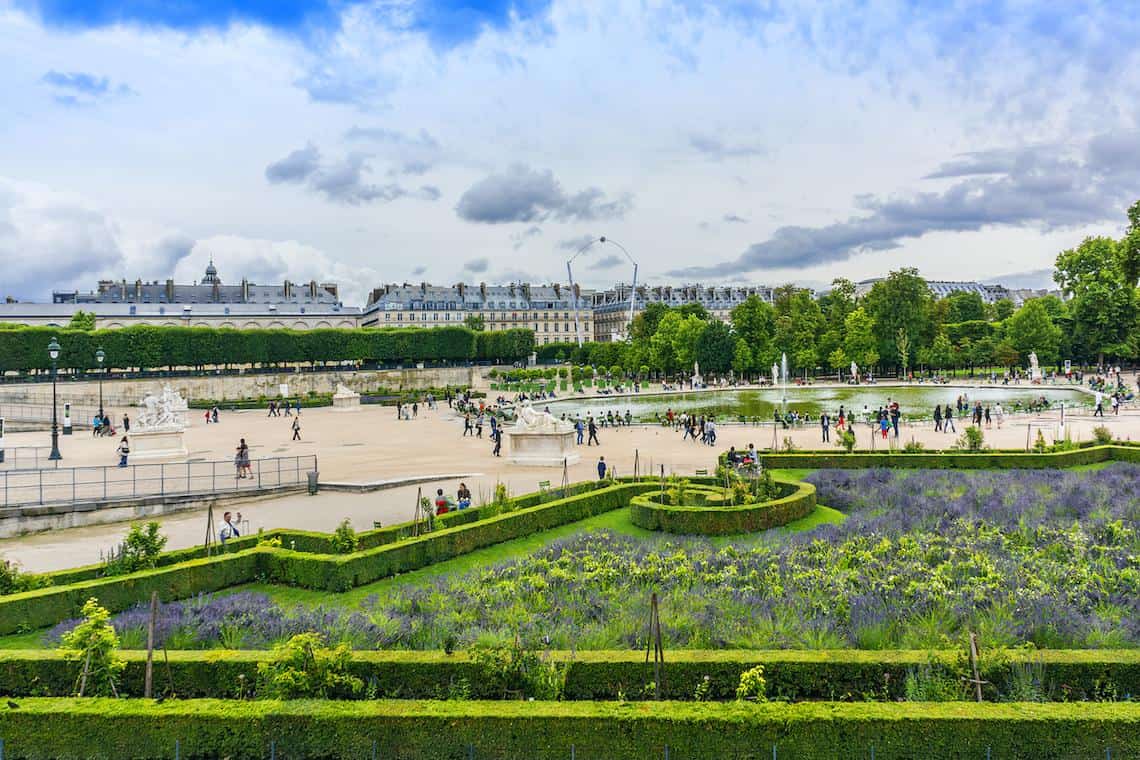 The construction of the Tuileries Garden was ordered by Catherine de Médicis, a French queen. She reigned over France from 1547 until 1559. She wanted to decorate the surroundings of the Tuileries Palace (that no longer exists), because she used to spend her spare time there.

You will love this charming garden for your autumn walks in Paris, when the place gains new colors. It’s the perfect place if you want to go walking hand in hand with your lover! 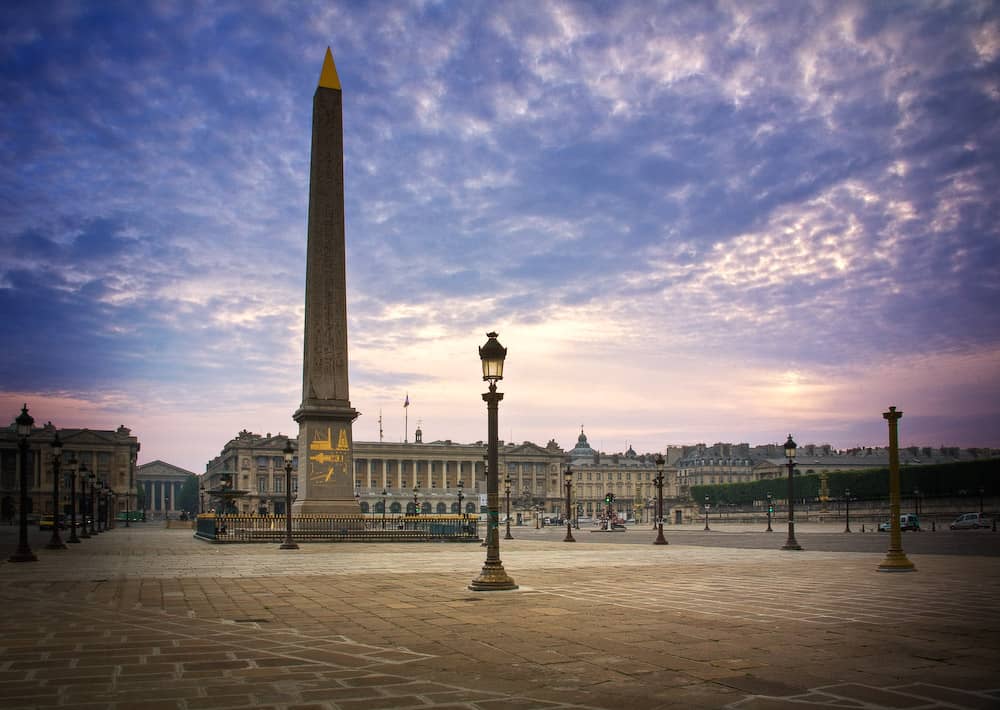 During the French Revolution there was a guillotine where thousands of people were executed on the Place de la Concorde. Among them, some famous people such as Marie Antoinette, Louis XVI and Robespierre. Many important events took place on this square, this is the reason why it is so famous and so important for the understanding of France history.

You now know some of the best things to do from Montmartre to the Champs Elysees! I hope you’ve enjoyed reading this article and that it has given you a few ideas! While in Paris, you will walk a lot so do not forget to bring some comfortable shoes! Don’t hesitate to contact us if you need further information about anything! See you soon in Paris!