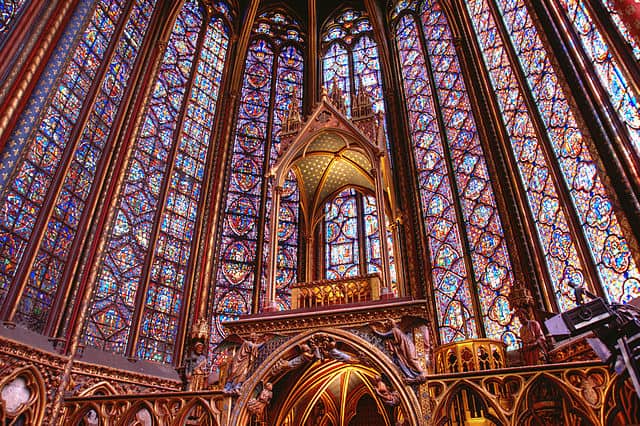 Even though the Sainte-Chapelle in Paris is a lesser known monument, the chapel welcomes over 900,000 visitors per year. What do all of these tourists want to see? The stunning stained glass windows, of course!

The Sainte-Chapelle is known around the world for it’s collection of 15 stained glass windows that are 15 meters tall. They tell the story of the Bible, and how the relics that were housed there came to Paris. And, that’s not all.

1. The Sainte-Chapelle has one of the most extensive collection of 13th century stained glass in the world 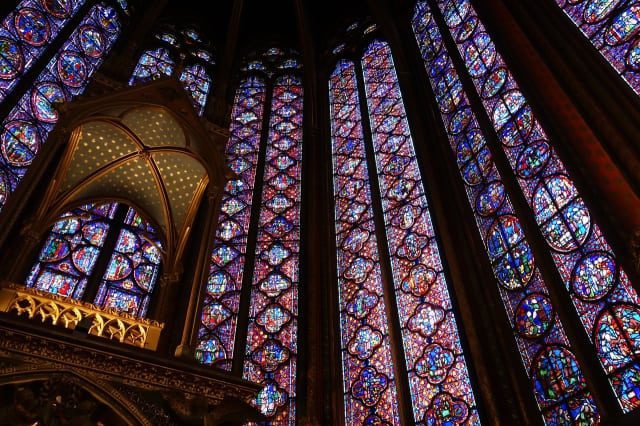 The stained glass windows in the Sainte-Chapelle by tmal – pixabay

The Sainte-Chapelle was constructed in 1242, and was commissioned by the French king at the time, King Louis IX. He was an extremely religious king. He fought in 2 of the Crusades, had a large collection of religious relics that he had picked up along the way, and was eventually canonized as a saint after his death.

After purchasing the Crown of Thorns and some other important relics from the emperor of Constantinople, Baldwin II, King Louis IX needed a place to store all of these relics. And, what better way to honor their importance that to build a chapel filled with stained glass windows?

All 15 of the windows in the Sainte-Chapelle are from the 13th century, and in fact, the chapel boasts the most extensive collection of stained glass from this century in the world! There is over 600m2 of glass in the chapel.

There is also a rose stained glass window in the Sainte-Chapelle, but it was added in the 15th century.

2. The stained glass windows inside the Sainte-Chapelle depict 1,113 biblical figures 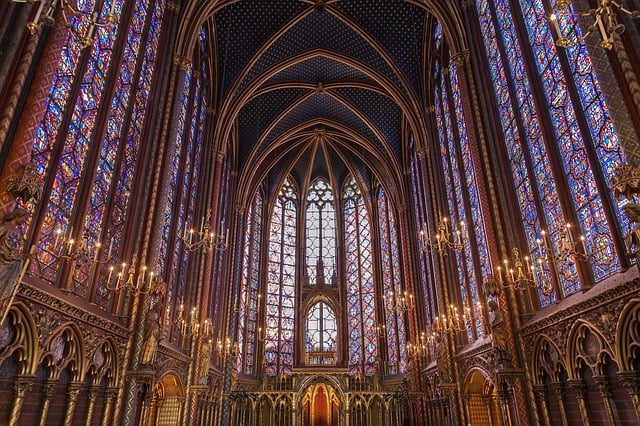 The stained glass windows in the Sainte-Chapelle consist of just 5 colors: blue, red, green, purple and yellow. Have you ever looked through a kaleidoscope? Well, when you enter the Sainte-Chapelle’s Upper Chapel, you’ll feel like you’ve just stepped inside one!

14 out of the 15 stained glass windows depict an impressive 1,113 biblical figures. These windows tell the story of the Bible, from Genesis until the Resurrection of Jesus. In order to follow the story in order, you’ll need to start on the left wall with the Book of Genesis, following along until the Passion of the Christ on the forward wall over the former shrine that held the relics, and along the right side where you’ll find the Book of Esther and the Book of Kings.

The last window depicts the history of the relics that were brought to Paris by King Louis IX. The window shows how the relics were discovered, the miracles they performed, and the French king triumphantly bringing them home to their final resting place in the Sainte-Chapelle.

If these windows sound like a story that you need to follow along in a certain order, you’re right! You should treat these windows like you’re reading a book.

3. You can read the stained glass windows in the Sainte-Chapelle 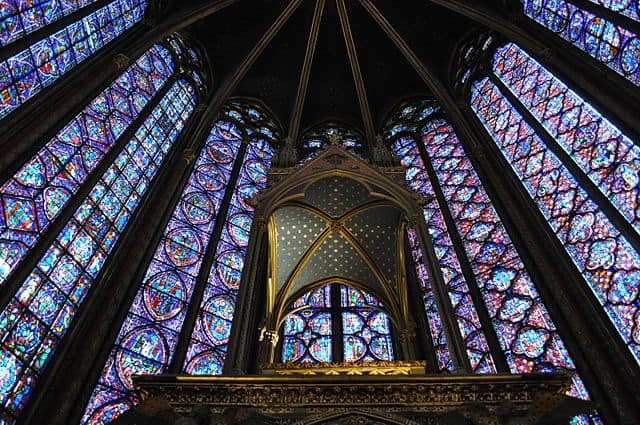 You definitely have the freedom to wander the Sainte-Chapelle’s Upper Chapel and look at the stained glass windows in any order you like. But, I do recommend you take the chapel’s advice and look at them in a certain order.

The truth is, in the 13th century much of the world’s population was illiterate, and this included Paris. Sure, anyone could go to church on Sunday (or every day, we’re talking about the very religious Middle Ages, after all!), and listen to a priest tell you the stories of the Bible, but you probably didn’t have the ability to read on your own.

Enter: the stained glass window! Stained glass windows were actually originally created to help illiterate people “read” stories from the Bible. I put “read” in quotation marks, as it wasn’t technically reading, but really looking at the biblical scenes depicted in the windows and learning the stories that way!

As I already briefly mentioned, start at the first window on the left side of the Upper Chapel to “read” the Book of Genesis. The biblical books included in the Sainte-Chapelle stained glass windows are as follows:

Take a look at the windows in order, and you will experience them as the original designer of the chapel intended. As the saying goes, “if it’s not broke, don’t fix it,” and follow along in the same way that 13th century chapel-goers did!

4. In the 19th century, the Sainte-Chapelle’s stained glass windows underwent a major restoration 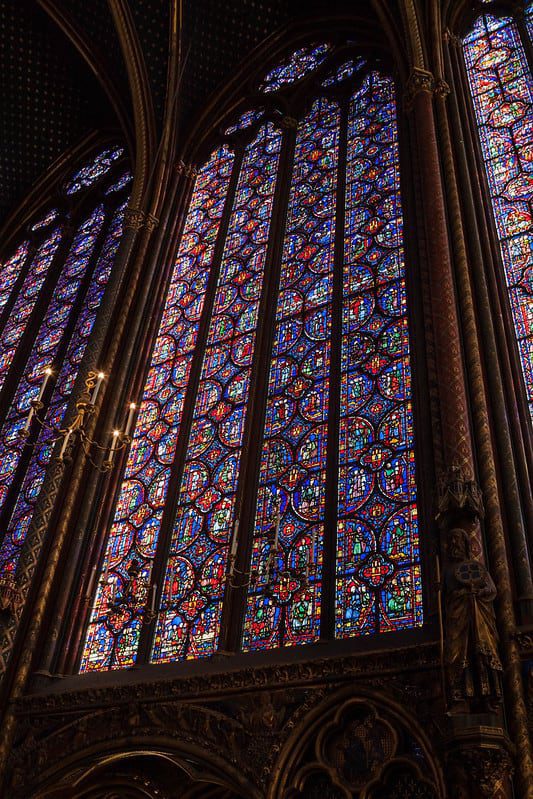 After several fires, a flood and the French Revolution, by the time the 19th century had rolled around, the Sainte-Chapelle had seen better days. So, beginning in 1836, the entire chapel needed to be restored, including the stained glass windows.

Architect Félix Duban headed the project, and worked on it from 1836-1848. In later years the architects Jean-Baptiste Lassus and Emile Boeswillwald hopped on the project to see it’s completion in 1857. The infamous Viollet-le-Duc (the architect responsible for numerous restorations in Paris, including the Notre-Dame) helped out as well, though unofficially.

Many restorations and renovations occurred over the 21 year project. Ultimately, the architects decided to restore the chapel to mostly it’s 15th century state, except for the stained glass windows.

The windows were restored to their 13th century goodness, and are actually some of the only parts of the chapel that was restored to it’s original 13th century condition. This is likely due to the fact that there was much more information out there regarding the condition of the windows in the 13th century. Whatever the reason, it’s a good thing they did it!

5. There was another major restoration of the stained glass windows from 2008-2014 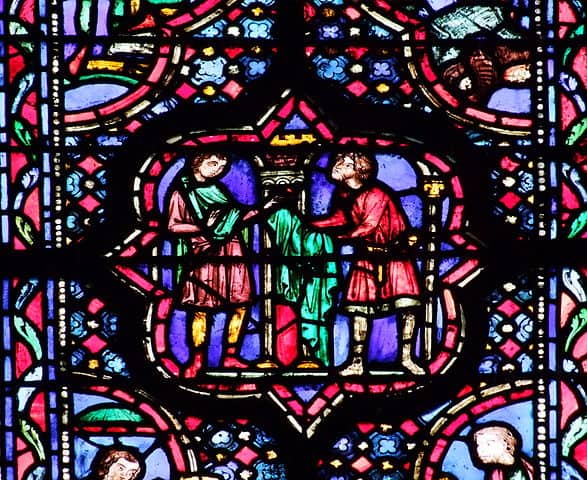 The Sainte-Chapelle wasn’t out of the woods just yet after it’s 19th century restoration. Due to pollution, rain, wind and the high number of visitors, the chapel had experienced a lot of wear and tear as the 21st century arrived.

In 1945, a layer of protective varnish had been added to the outside of the windows in an effort to protect them from the damages that Paris endured during World War II. This added yet another dark layer on top of the already fading stained glass windows, making it nearly impossible to make out the images.

In 2008, a 10 million euro project to clean and further protect this Parisian monument began. The architects, designers, artists and restorers wanted to complete to project in time for the 800th anniversary of King Louis IX’s (now Saint-Louis!) birthday.

Architects Alain-Charles Perrot and Christophe Bottineau headed the project. To say that it would be a challenge is an understatement, as the windows had undergone so much damage since their construction in the 19th century. There were also just so many windows that needed work.

The project was actually completed with the help of lasers! The lasers could read through the dirty glass to determine the image, without changing or destroying the fragile image itself. There were also new layers of clear glass that were applied to the outside of the window, to ensure even more protection from the elements and pollution.

Thanks to these new and improved technologies, the project was completed in time to celebrate the former French king’s birthday! Happy birthday Saint-Louis!

I hope that you’ve learned a lot from this informative article on the stained glass windows in the Sainte-Chapelle! It is definitely worth checking out if you haven’t yet, and if you already have…you can back me up on this.

If you want to learn more about famous Parisian monuments, I recommend that you join one of our walking tours in the city! All of our guides are locals that really know their stuff. Click here to learn more and to make your booking!