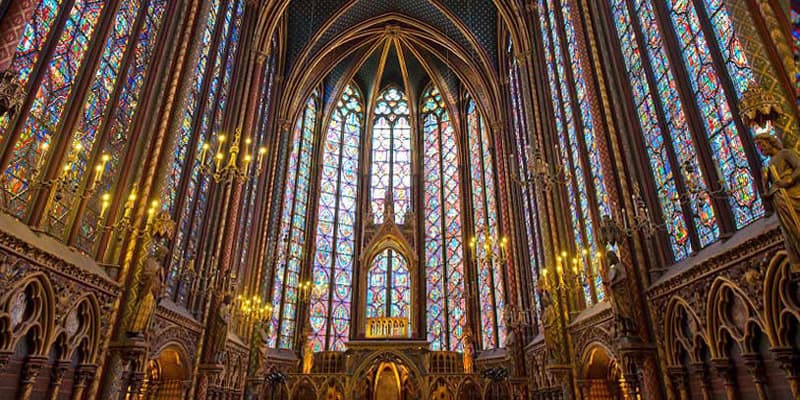 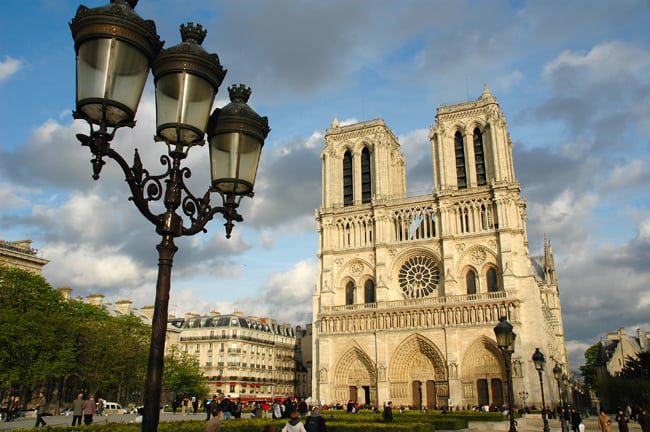 Visiting the Notre Dame cathedral is the one of the main things to do near the Sainte Chapelle. Before entering the cathedral, take time to go around and look at the outside of the building. You will see not only numerous sculptures but also the flying buttresses, typical of Gothic architecture. Once inside, I always find the stained glass magnificent. Note the rose window: the style is resonant, in the Sainte Chapelle it was flamboyant. You can also see the crown of thorn of Jesus inside Notre Dame. It used to be in the Sainte Chapelle but was moved when the latter was desacralized. Before leaving, you might want to climb on the rooftop, not only for the magnificent view over Paris but also for the close-ups on the gargoyles. 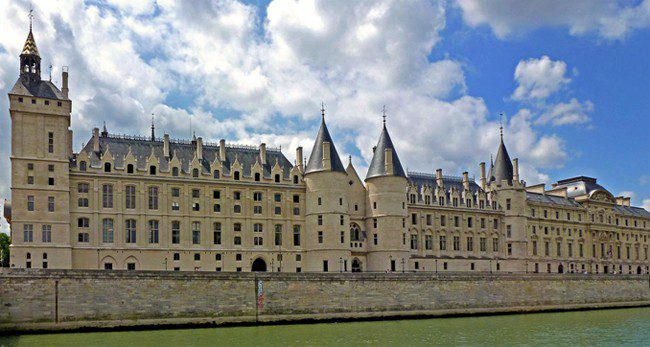 Among the things to do near the Sainte Chapelle, you can also visit the Conciergerie. This building used to be part of the King’s palace from the Xth century up to the XIVth century. It then became a prison. During the French revolution in 1789, over 2000 people were imprisoned there. This is where Queen Marie-Antoinette spent her last night before being executed in 1793. The grand hall with gothic arches is one of my favourite parts of the Conciergerie.

Buy flowers at the flower market 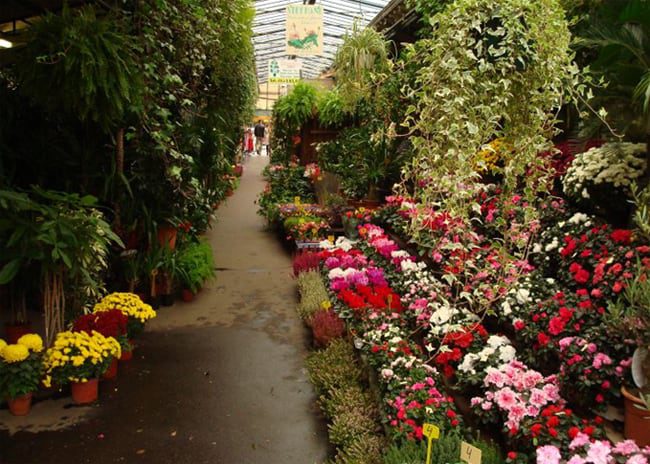 The flower market is almost in front of the Sainte Chapelle. It is one of the things to do near the Sainte Chapelle that is the closest. It is there since 1808 and on Sundays, there is also a bird market. I like going there; it gives the opportunity of being a little away from the hassle and bustle of the city. The Queen of England Elizabeth II went there during her last state visit on the 6th June 2014 after commemorating D-Day, and since then, the market is named after her! 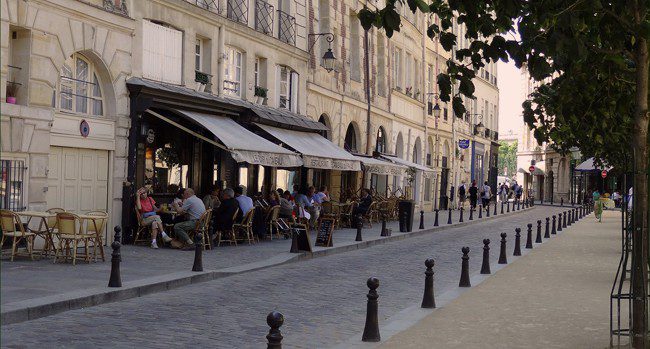 Among the things to do near the Sainte Chapelle, if you head towards the tip of the island, you will see the “Place Dauphine”- Dauphine square. One of the oldest squares in Paris. The mix of brick and stones is typically from the early XVIIth century. I recommend the cafés and restaurants here as they are less touristic. Probably the best you will find in the vicinity of the Sainte Chapelle!

Have a look at the “Pont-Neuf”, Paris’ oldest bridge

Before leaving don’t forget to get a glimpse of the Pont-Neuf, the oldest bridge in Paris. It was first to be built in stone, and without any houses on it. It is my personal favourite, for its simplicity and elegance. Just across the bridge, on the Left Bank of Paris, the Lapérouse restaurant is well known for being the first with private dining rooms, very popular in the XIXth century, but it is expensive and the food is not the best there is.

Head for the “Ponts des Arts”, the bridge for lovers

Going to Pont des Arts is not the nearest thing to do near the Sainte Chapelle, count a 10-15 minute walk. Pont des Arts used to be famous for its tradition: couples put padlocks on the bridge’s railing and throw the key away in the river, so that their love will last forever. But this tradition doesn’t exist anymore. All the padlocks were removed because they were weighing the bridge and damaging it! You won’t be able to lock your padlock with your lover, but you will enjoy an incredible view without padlocks ruining it!

Take a break on the banks 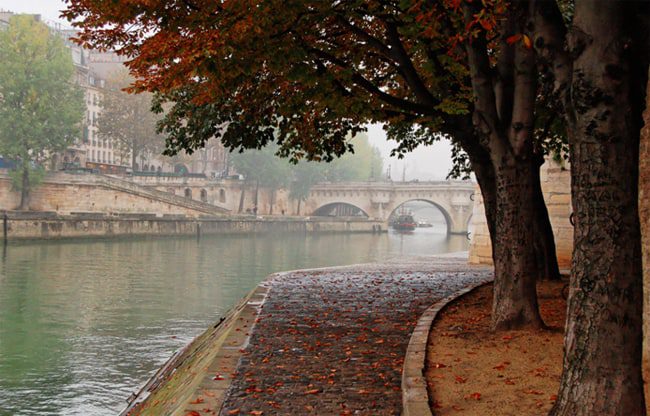 A very Parisian thing to do in summer is to grab a drink, something to eat and settle on the banks of the Seine. This can be very relaxing if you need a break from all this walking and visiting!

Stroll in the Latin Quarter 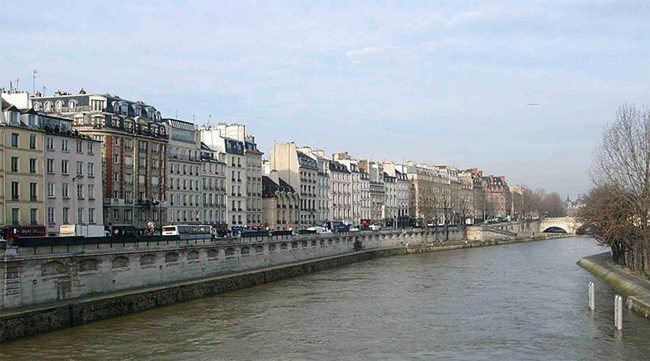 Strolling in the Latin Quarter, on the left-bank, is also one of the things to do near the Sainte Chapelle you might want to consider. This student quarter with narrow winding streets, filled with many cafés and shops selling food, really feels lively and authentic. You can visit the Pantheon, built in the XVIIIth century, where famous Frenchmen are buried, like Victor Hugo. If you prefer green spaces, you might want to head for the nearby Luxembourg gardens.

Have an ice-cream at Berthillon

If you need a break from visits and walking, one of the good things to do near the Sainte Chapelle is to head for Bertillon, the most-famous ice cream café in Paris, located in the middle of the nearby island, “Ile Saint-Louis”. The ice-creams are made only from natural products, and are the best ice-creams I have ever had in Paris. There are numerous ice-cream flavours, even original ones such as tea, lavender or foie-gras!

Now that you know some of the best things to do near the Sainte Chapelle, I’m sure you will enjoy the city even more! Don’t hesitate to contact us if you need further information about anything! And join our tours, if you want to walk the city with a local and get to discover the best places and all the history of Paris! See you soon in Paris!