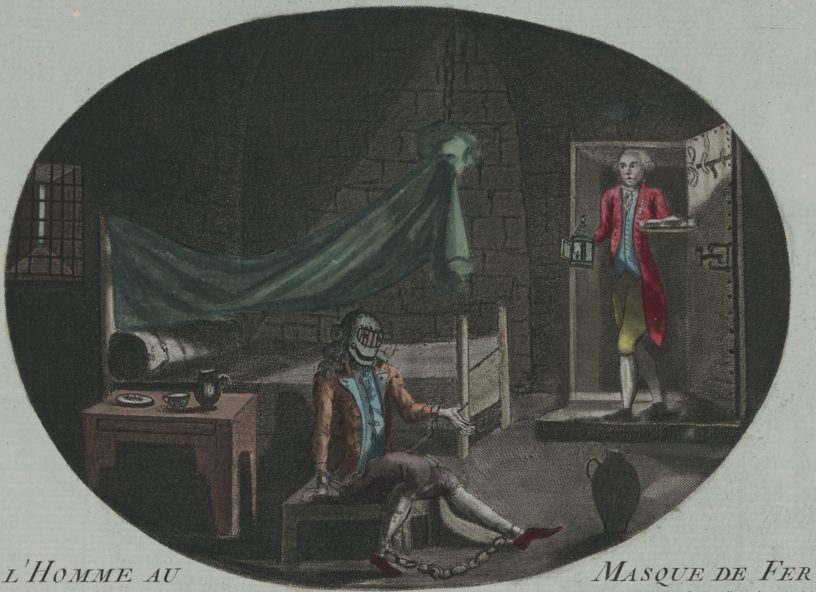 The main in the iron mask - Courtesy of Wikimedia Commons

An unnamed prisoner, an unknown identity, a royal secret, conspiracies, riddles: It all adds up to France’s biggest secret.  The story of the man with the iron mask is one so shrouded in mystery and historical enigma that it is impossible to know where truth meets legend. The mystery has baffled historians since the 17th century. It has inspired books, movies, and even the French philosopher Voltaire. The truth lies somewhere, littered among ancient letters and guarded secrets, waiting to be found. 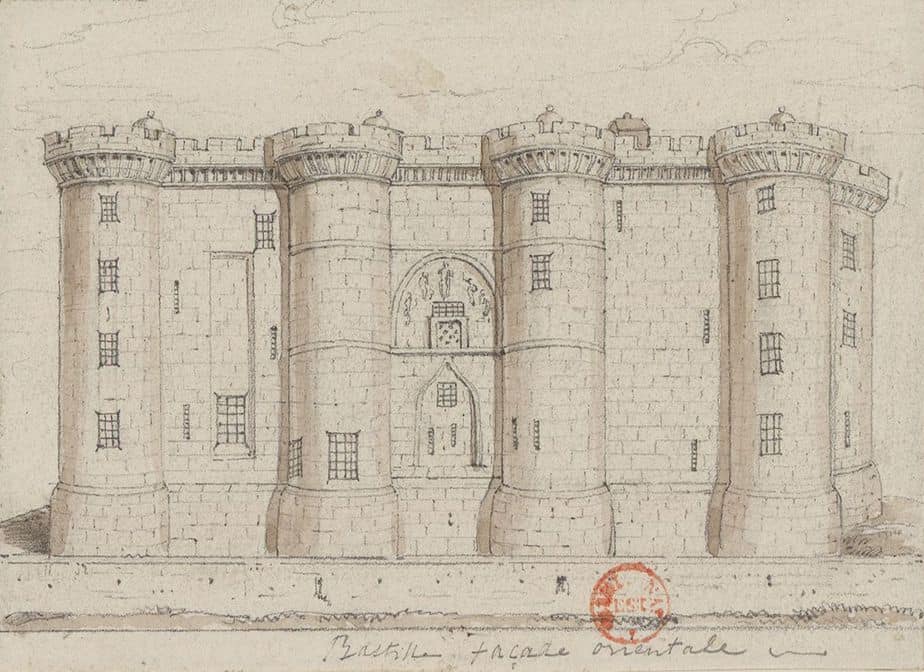 East wall of the Bastille prison – Courtesy of Wikimedia Commons

On the 19th of November, year 1703, the death of an unidentified prisoner at the Bastille prison was reported, by letter, to the state. The letter was written by Lieutenant Étienne du Junca, explaining that a little after 10 O’clock the prisoner, still wearing his black velvet mask, was found dead in his cell and was promptly buried in the cemetery Saint-Paul. There was no ceremony.

Upon his death, the prisoner’s clothes and sheets were burned, his cell walls whitewashed and the floor tiles removed in order to prevent the finding of any concealed notes that the prisoner may have left to expose his identity. 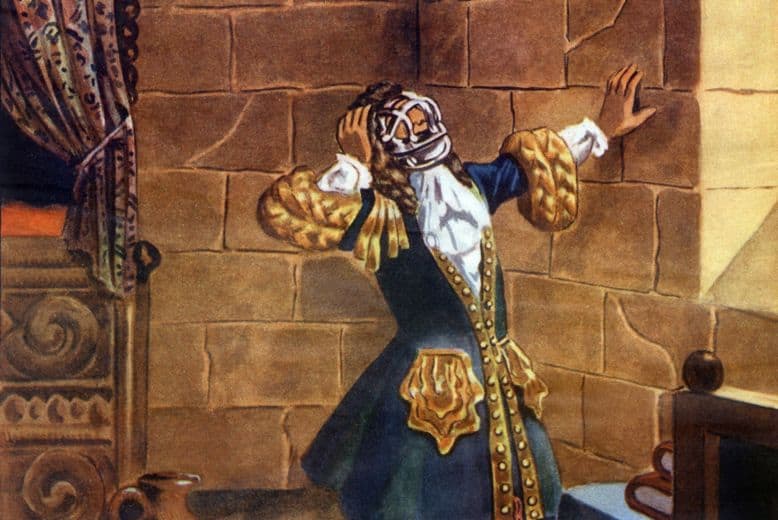 The Man in the Iron Mask by Michel Moniquet, 1948

In 1669, by order of King Louis XV, an unknown man was taken prisoner, sent to southern French prison of Pignerol, and placed under the guard of Bénigne Dauvergne de Saint-Mars. All that was told to the public was that the man was someone believed to be dead but was, in fact, not.

The strictest secrecy was evoked to hide the man’s identity from the public. The prisoner was forced to wear a mask whenever in public and was warned that if he was ever to expose his identity he would be shot on the spot.

Before his death, the unknown prisoner had been sent to many different prisons around France. He had very little contact with the outside world except for the times when he was taken to mass or transported from one to prison to another.

Who the man was, why he was imprisoned, and why he was kept a secret has become one of the biggest mysteries facing French historians. His true identity has been widely debated among professionals.

Voltaire and the prisoner 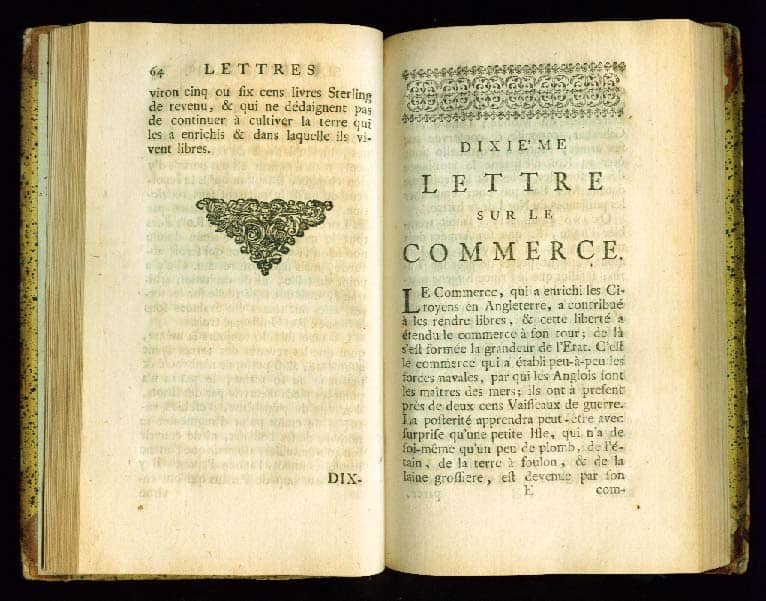 Letters published by Voltaire that would eventually lead to his banishment

The French public had been made aware of the anonymous prisoner thanks  to a series of short, handwritten notes published in a local Gazette. Although few people had ever seen the prisoner, the public had already begun to speculate on the man’s identity.

It was nearly 50 years after the man’s death when the first written speculation was launched by the French Philosopher, Voltaire. Voltaire claimed to have found out about the prisoner and helped propel the myth of the man in the iron mask into French culture.

Voltaire described the mask that the prisoner wore as a steel plate with springs in the jaw that would allow him to eat and speak freely (it was later proven to be a velvet mask). He also said that the prisoner was treated with extraordinary kindness and was allowed many luxuries that normal prisoners had to forgo.

The prisoner was given the finest lace to wear and was treated to music in his cell. Voltaire hinted that the recent death of Cardinal Mazarin may have been related to the mystery. 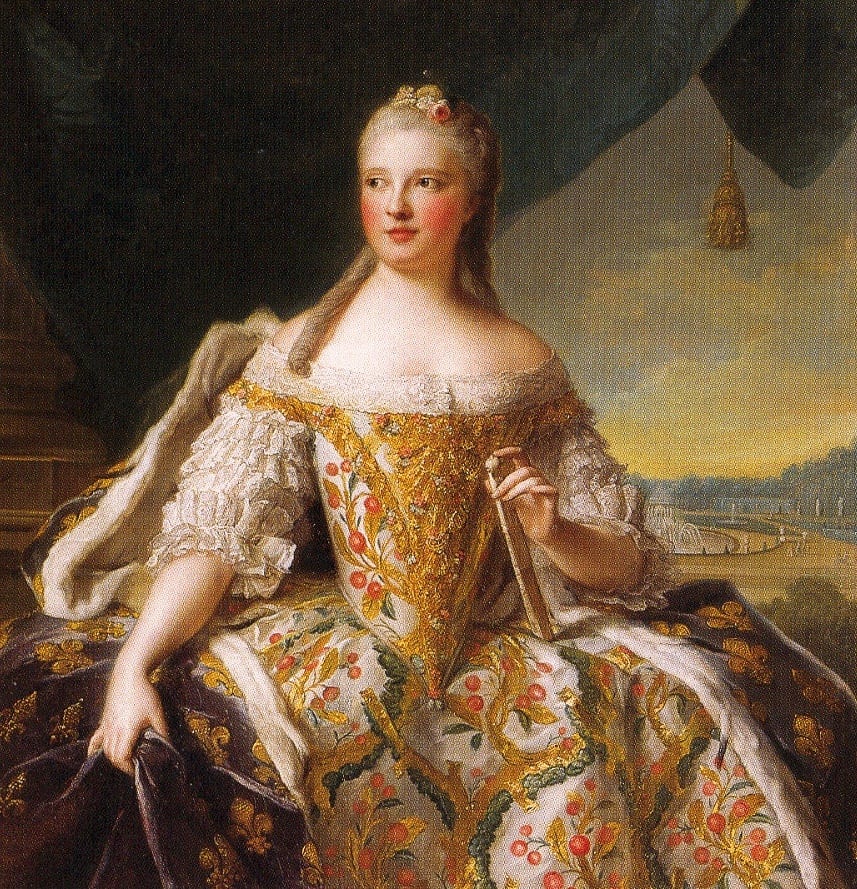 Fueled by Voltaire’s thesis, the theory of King Louis XVI’s secret twin brother has risen to become one of the most popular speculations.

Voltaire (as well as many others) claim that the prisoner was the identical twin brother of the king. In order to eliminate any possible confusion (for at that time it was difficult to prove which twin was born first), Anne d’Austria and Cardinal Mazarin hid the king’s twin, raising him apart from the throne.

When Cardinal Mazarin died, King Louis XVI found out about his banished twin and, in order to keep the secret under locks, demanded that his brother be imprisoned and his identity kept secret. 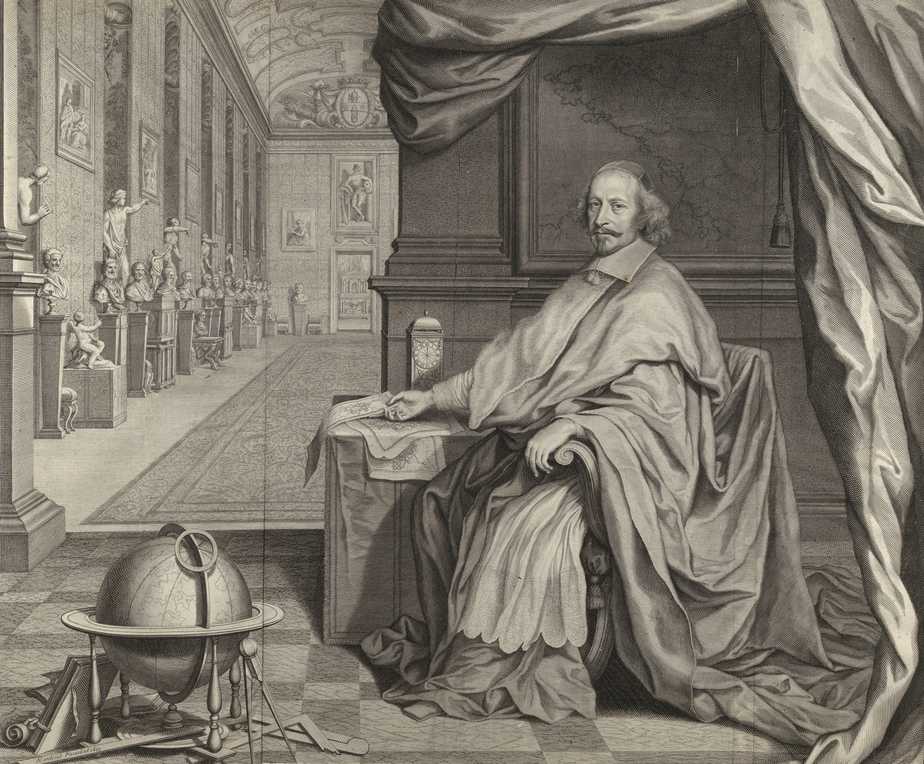 This could explain the secrecy surrounding the prisoner and the reason for his luxurious treatment.

There are some historians who reject this thesis by invoking the circumstances of the birth. As was tradition, the queen gave birth to the future king in front of an open court and there were many people who witnessed the birth.

Other historians, such as Marcel Pagnol, claim that King XIII led the procession from the court directly after the first birth to celebrate in the chapel. If so, this would have allowed time for the queen to give birth to her second child with the sole company of the midwife.

According to the genealogy of the French Kings, there were many twins born in the family, sparking even more speculation into the twin theory. 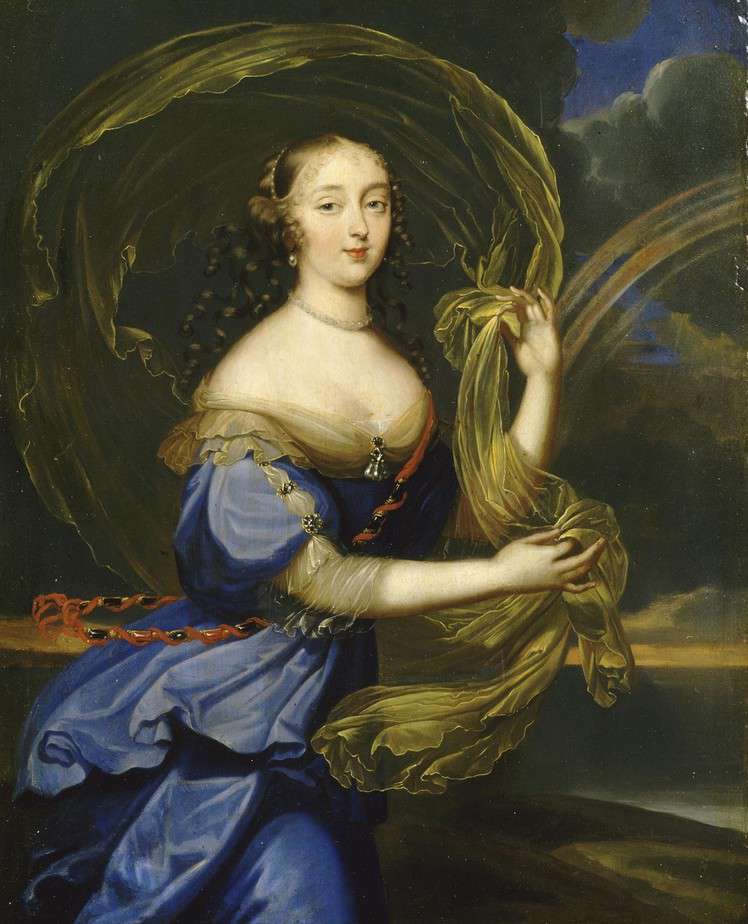 For many years, letters sent between the prisoner’s custodian and members of the royal counsel were believed to have been lost. Historians were eventually able to obtain these letters that detailed the way in which the prisoner was to be treated.

These letters, however, would ultimately raise more questions than they answered. In one of the letters, historians found instances in which the prisoner was referred to as Eustache Dauger.

“Eustache Dauger” was not written in the same handwriting, leading people to believe that the name of the prisoner was originally withheld from the letter and then later, by some other person, marked in as Eustache Dauger. No one knows why.

Eustache Dauger de Cavoye was a wealthy man born to a good family and his mother had worked for the queen of France.

His service in the military has been well documented but little is known about him afterwards. Historians believe that Dauger began to lose his mind and fall into the Chambre Ardent Affair (The Affaire of Poisons).

This massive scandal involved the buying and selling of “inheritance powders” that were used for devil worship and the sacrificing of infant children. The scandal engulfed many people, among them was the mistress of King Louis XVI who was reported to take part in the sacrifices.

The theory goes that Eustache Dauger was imprisoned for his contributions to the scandal.

Furthermore, Dauger’s sentencing to prison was a public affair that did not occur in the prison of Pignerol but rather in Saint-Lazare. He was officially declared dead in 1680, 23 years before the reported death of the man in the iron mask. There is, however, a twist.

Nicolas Fouquet and his valet 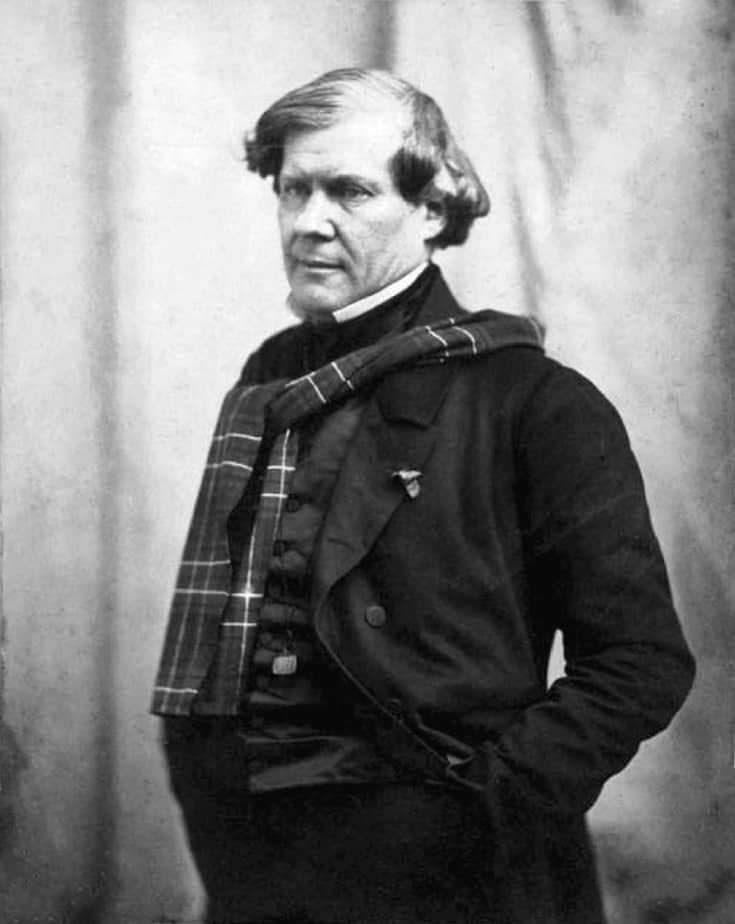 Nicolas Fouquet was a French Superintendent of Finance who had been tried for corruption, leading to his banishment.

Officially, Fouquet was reported to have died at the age of 65 in Pignerol. The thesis claims that, in point of fact, it was not actually Fouquet who died, but instead his valet and fellow prisoner Eustache Dauger.

Letters from the prison show that only eleven days before the reported death of Fouquet, Eustache Dauger was also found to be deceased. Historians claim that the body of Eustache Dauger could have been used as the dead body of Fouquet.

There is some evidence to support this theory. The body of Fouquet has not been found in Pignerol or in his families crypt. This would also make sense within the context of Dauvergne de Saint-Mars’s claim that the prisoner is someone who the public believes to be dead.

This theory has been widely rejected because it would mean that Fouquet actually died in 1703, at the age of 88, an incredibly long time for a prisoner of that time. Also, there does not seem to be any reason as to why they would want to have kept his identity secret. 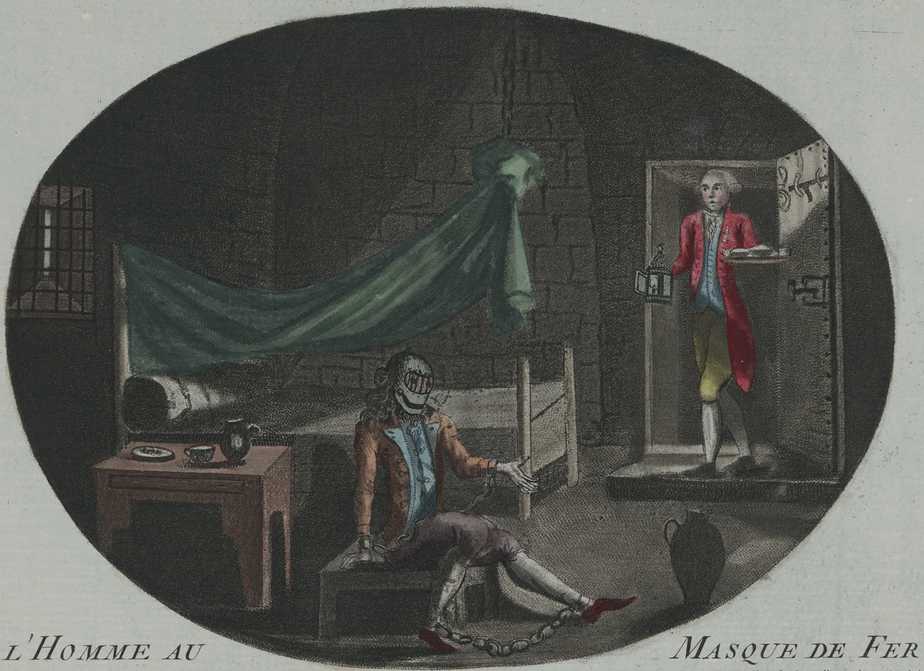 The main in the iron mask – Courtesy of Wikimedia Commons

These are only some of the theories expounded by historians. There have been many others ranging from secret mistresses to hidden treasure.

To this day there has been no theory which stands strong upon careful scrutiny. The mystery of the man in the iron mask if food for the imagination. There is no telling how many secrets have been locked away, hidden under their own velvet masks, waiting to be uncovered.