The 6 best books by Jane Austen you should read 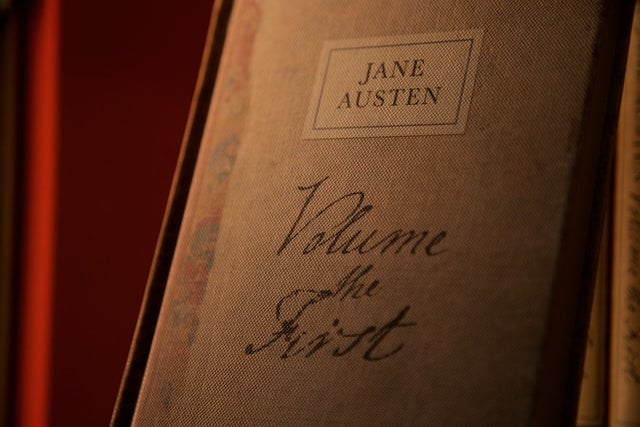 The 6 best books by Jane Austen you should read

Jane Austen is a world-famous British novelist who lived and worked in the early 19th century. Her novels have since been made into several successful film and television adaptations, and she happens to be one of my personal favorites!

Like most adaptations, the originally written versions by Austen herself are much better than their live-action counterparts. Well, maybe that’s just in my opinion. I’ll let you all decide for yourselves!

Austen published 6 novels in her lifetime, and each one is worth reading. If you don’t know where to start, I suggest that you read Austen’s work in the order that they were published. Check out my comprehensive list of titles below! 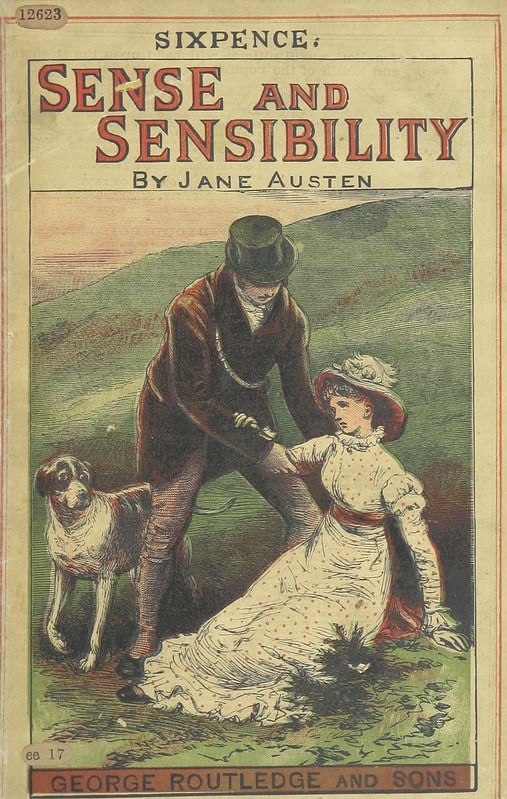 Sense and Sensibility was the first novel that Austen ever published. When it was first released it was published anonymously, due to the strict pressures placed on women at the time. Women were traditionally expected to act as the “Angel of the House,” and those who were not wives or mothers were generally looked down upon.

Basically, women were not expected to work outside of the home, and that included working as a writer. Sense and Sensibility was originally credited to “a lady.”

The novel tells the story of two sisters named Marianne and Elinor. The pair move from their large and rolling estate to a small cottage. The novel is centered around the sisters’ connection and demonstrates how important family relationships were to Austen. 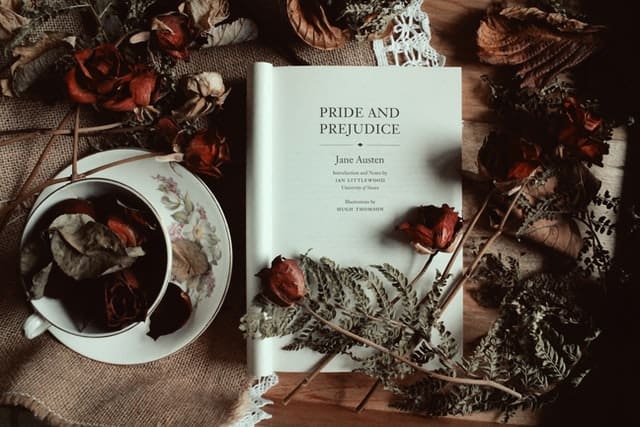 Pride and Prejudice may be my favorite Austen novel of all time! When it was published in 1813, it was published anonymously like her first novel. The first edition credits the author as being the same behind Sense and Sensibility.

Austen’s second novel tells the story of the Bennet family, and more specifically, Elizabeth Bennet. Pride and Prejudice is definitely a love story, and it dives into the budding relationship between Elizabeth and Mr. Darcy, a wealthy neighbor. It is also an excellent commentary on the expectations of women at the time as well as the pressure family’s placed on their daughters to find an acceptable husband to settle down with. 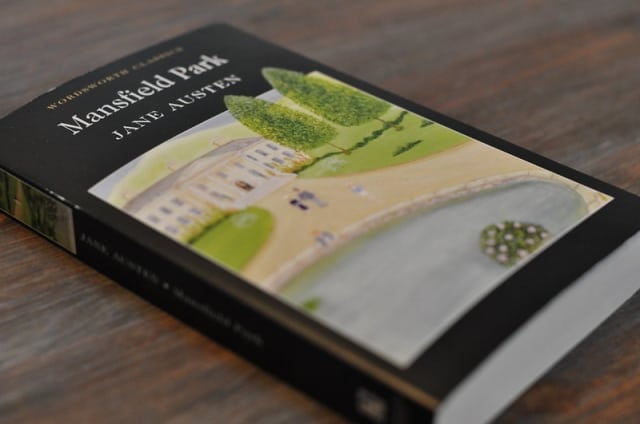 Like the previous two novels on my list, Mansfield Park was published anonymously in 1814 and was credited to the “same author as Sense and Sensibility and Pride and Prejudice.” Can you tell how suffocating it must have been to be a female writer in the early 19th century?! My heart really goes out to Austen and I feel for all of the difficulties she must have encountered. I think this is another reason why I love this author so much!

Mansfield Park is quite different from Austen’s other works. Critics and scholars call it dark and psychologically difficult. Austen’s heroes are usually outgoing, high-spirited, and strong-minded. In Mansfield Park, the uptight and morally strict characters save the day, while the usual Austen heroes are made out to be the bad guy.

This one is definitely a lot different from the first two novels on my list, but it is worth reading. 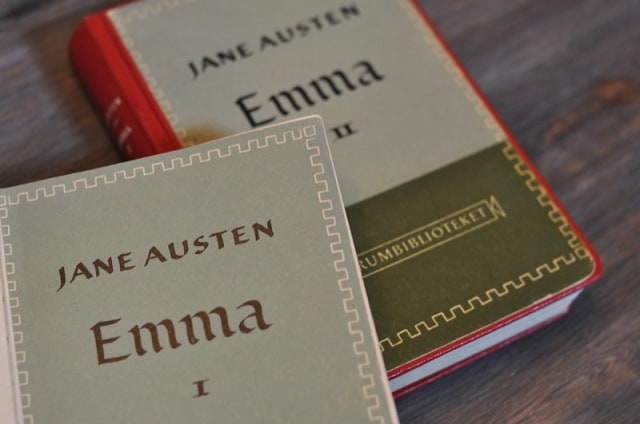 Emma was also published anonymously, and credited to the author responsible for the previous three titles on my list. This novel is a comedy and I personally loved Austen’s wit throughout the story!

Emma tells the story of the main character, you guessed it, Emma, who is a lovable yet silly woman living in a fictional English town. Emma thinks that she knows best, and is proud of her misplaced matchmaking abilities. As a reader, it’s really interesting to see how Emma perceives herself versus the way that others view her. Emma is one of Austen’s most beloved novels and it is obvious that at this time in her life she had successfully fine-tuned her craft. 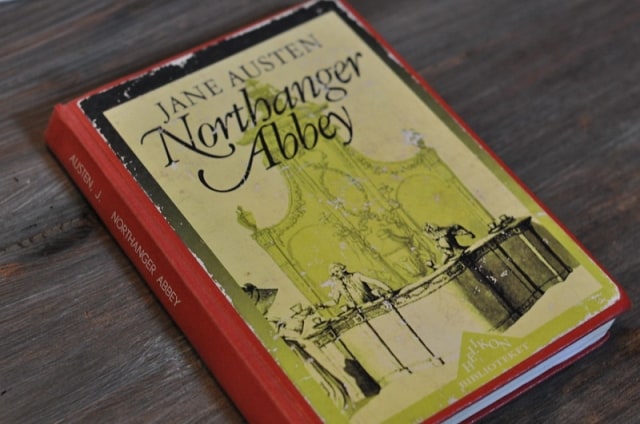 Austen wrote Northanger Abbey in 1803, but it wasn’t published until after her death in 1818. The novel is filled with that Austen wit that you’ll come to know and love once you start reading her work.

Inside the novel, Austen makes sly digs at the gothic tradition, so if you really want to understand her subtle jabs, you’re going to want to learn a little bit more about gothic novels before you get started. If you’re feeling lazy, to sum it up, gothic novels are famously dramatic and filled with intrigue. Northanger Abbey’s main character, Catherine Morland, lives her life as if she was inside a gothic novel, and Austen pokes fun at her in the kindest way. 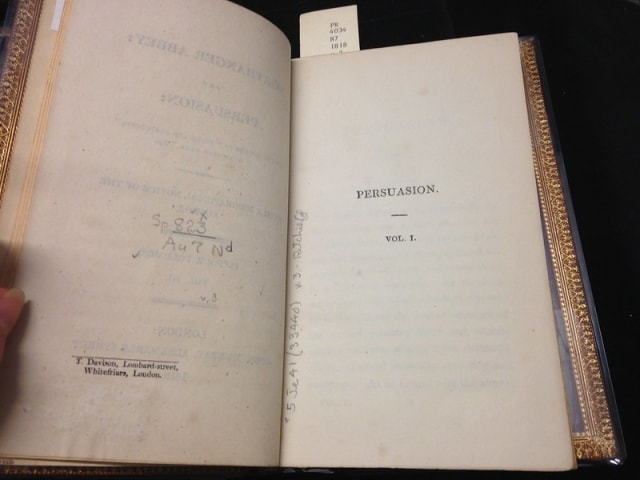 The last novel on my list, Persuasion, was also published posthumously in 1818. If you’re looking for a love story, you’ve found it, as Persuasion is her most romantic novel. The main character is also one of Austen’s oldest, so if you don’t want to read about the trials and tribulations of adolescents (well, not quite adolescents, but most of Austen’s main characters are in their teens or twenties), you may want to pick up this one first.

Persuasion tells the love story between Anne and Captain Wentworth. I won’t tell you any more as I don’t want to spoil the book, but it ends with a beautifully written love letter from the Captain to Anne.

While Jane Austen may have had to hide her true identity throughout most of her writing career, her legacy has lived on. Today, she is one of Britain’s most famous and beloved authors, and she is also well known around the world. Her novels have been translated into thirty-five different languages, and most bookworms have one of her works on their “favorite books” lists!

Take a look at the list above and head to your local bookshop to pick up one of her novels!