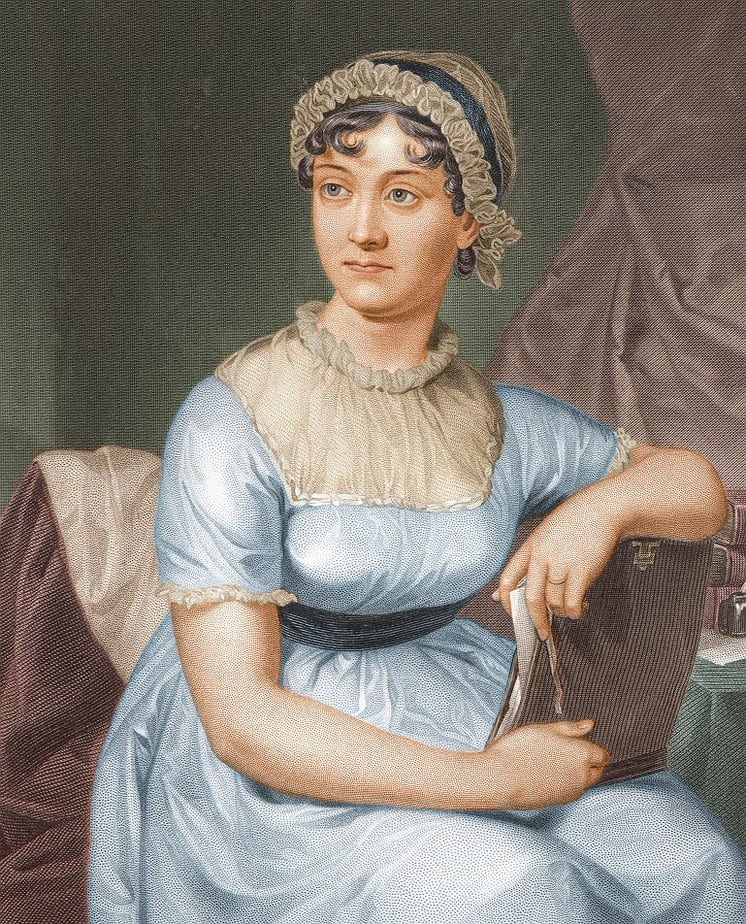 Jane Austen is one of the most famous English writers of all time! And, rightfully so. You get if you’ve read any of her novels! If you haven’t get, get out to your local bookstore right now.

Ms. Austen may be well known, but do you know any facts about her? If not, I’m here to teach you a thing or two. If you have, well…you’re probably a Jane Austen lover already and you’re sure to love this article.

Keep reading to discover my top 10 facts about Jane Austen! 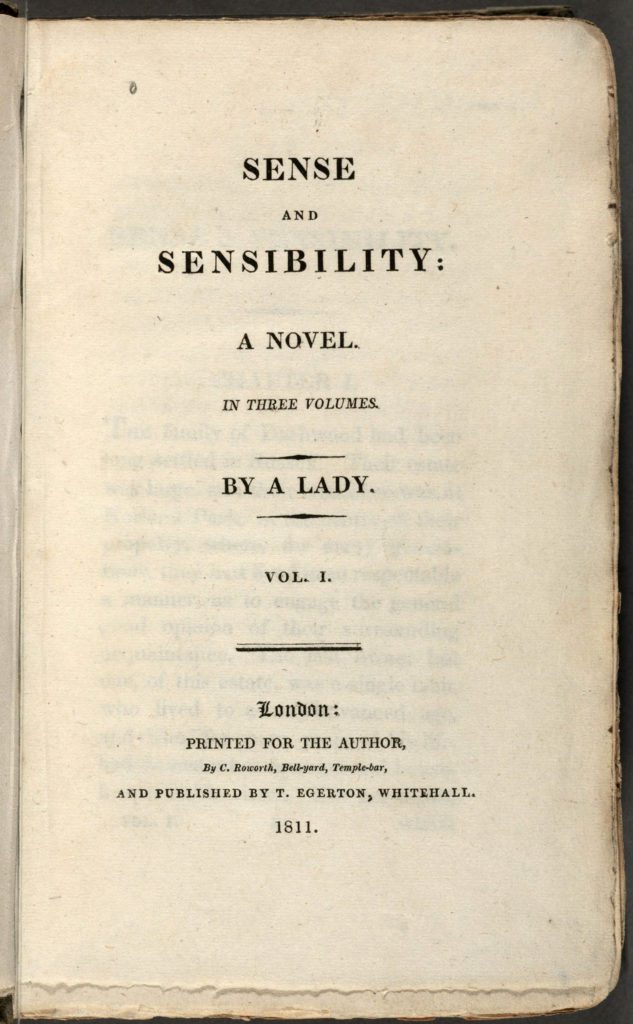 The title page of Sense and Sensibility, credited to “A Lady” – WikiCommons

Jane Austen was born in 1775 in Hampshire, England. She lived in a time period when women were expected to be wives and mothers, and nothing else. So, it is understandable that she wanted to publish her works anonymously!

Women were not welcome in the world of writing, a field dominated by men. It was considered improper if a woman tried her hand at writing, never mind if she attempted to publish her work.

Austen remained single her entire life, and many if not all of her novels are entered around the idea of marriage. The sad truth of the day was that women were dependant on marriage for financial security and good social standing.

2. Jane Austen began writing when she was a child 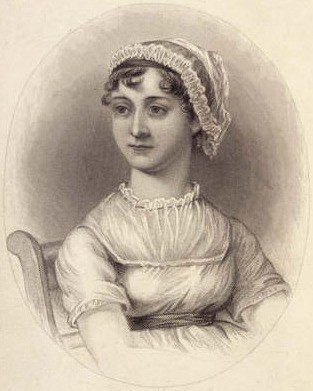 Austen was a bright child, and she began writing when she was just 12 years old. She later called this period of her work her “Juvenilia.” He earliest works were very humorous, and she even wrote a collection of textbook parodies when she was 16. She called it “The History of England…by a partial, prejudiced and ignorant historian.” She also wrote many parodies of romance novels. I love this side of her!

By the time Austen was 23, she had already began working on the rough drafts of her future novels Sense and Sensibility, Pride and Prejudice and Northanger Abbey. 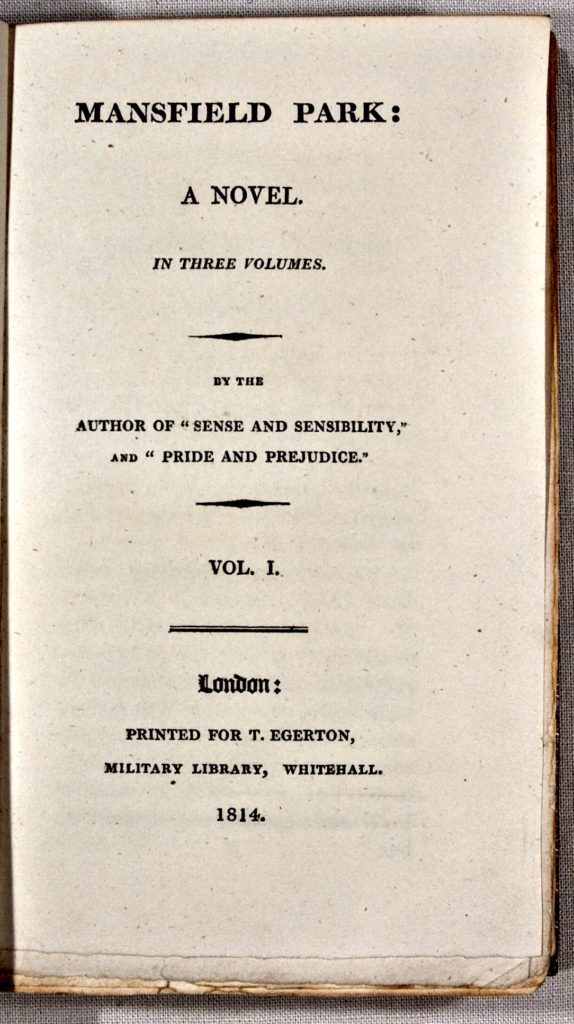 Austen is the author of 7 novels:

Only 4 of these novels, Sense and Sensibility, Pride and Prejudice, Mansfield Park and Emma, were published while she was still alive. After her death, her family made sure that the rest of her work got out into the public. With the publication of Persuasion and Northanger Abbey (sold in a set) in particular, her brother Henry wrote a “Biographical Note” to open to book, identifying Austen as the author.

4. Jane Austen was educated mainly by her father 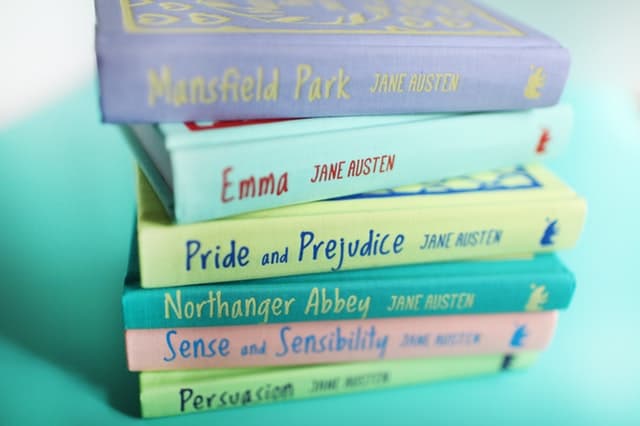 In 1793, Austen and her sister Cassandra were sent to live with their aunt, Ann Cooper Cawley, to be educated by her. From there, the sisters went on to study at Abbey School, which was a boarding school for girls.

A part from her time with her aunt and at Abbey School, Austen was educated mainly by her father, George Austen. Her father had an immense library, and scholars say that she was an avid reader from a very young age because of it! I dream of having this sort of childhood!

In addition to educating her, George Austen played a major part in attempting to get his daughter’s works published. At the time, women were not allowed to sign contracts on their own; they needed permission from their father or their husband.

Ultimately, even with George’s efforts and the fact that he represented Jane, publishers refused her work. Mr. Austen took a first draft of Pride and Prejudice (originally called First Impressions) to the London publisher Thomas Cadell. After learning that it was written by George’s daughter, Cadell refused to read it and sent George away.

In the end, Austen actually paid a publisher to publish her work. She also paid him commission on any copies sold.

Austen came from a large family with 8 children. Jane was the only girl along with her older sister Cassandra. The first biography ever written on Austen gives the implication that she only had 5 brothers: James, Edward, Henry, Frank and Charles. But, upon further investigation into her family life, it was discovered that she had a 6th brother named George.

George was disabled, and suffered from epilepsy and learning difficulties. It is also assumed that he was deaf as well. It was really difficult to care for a disabled child at the time, and so George was sent away to live a different family that could care for him.

Although Austen’s family supported George financially and went to visit him regularly, he is barely mentioned in the family’s memoirs, and Austen doesn’t mention him in any of her letters.

6. Jane Austen brewed her own beer

I love this fact about Jane Austen! Typical to her time, almost everyone in England drank beer regularly. Along with the rest of her family, Austen knew how to brew beer from scratch. Apparently her specialty was “spruce beer.” It’s made with molasses, giving the beer a sweeter taste. Cheers to that! 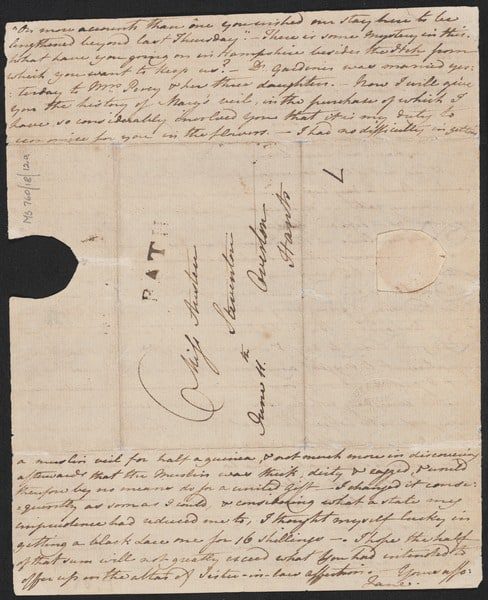 Austen had produced 3 of her novels by 1801, which shows how fervently she was writing at the time. Then, in the few years before her father’s death in 1805, it seems that Austen had stopped writing completely.

It’s hard to say why this happened, as most of Austen’s letters and correspondences were destroyed by her sister Cassandra after Jane’s death. Cassandra justified this by claiming she didn’t want Jane’s relatives to learn of her sometimes scathing humor and quick temper.

But, we can assume that she stopped writing because when her father retired he decided to relocate the family to Bath, England. Scholars claim that Austen was unhappy with this decision, and subsequently stopped writing. Then, her father died in 1805 and the family began to move around even more. The constant disruptions couldn’t have been a good environment to write.

It wasn’t until 10 years later when her family had settled down to live in a home owned by her brother Edward that she picked up her pen again.

8. Jane Austen was no stranger to romance 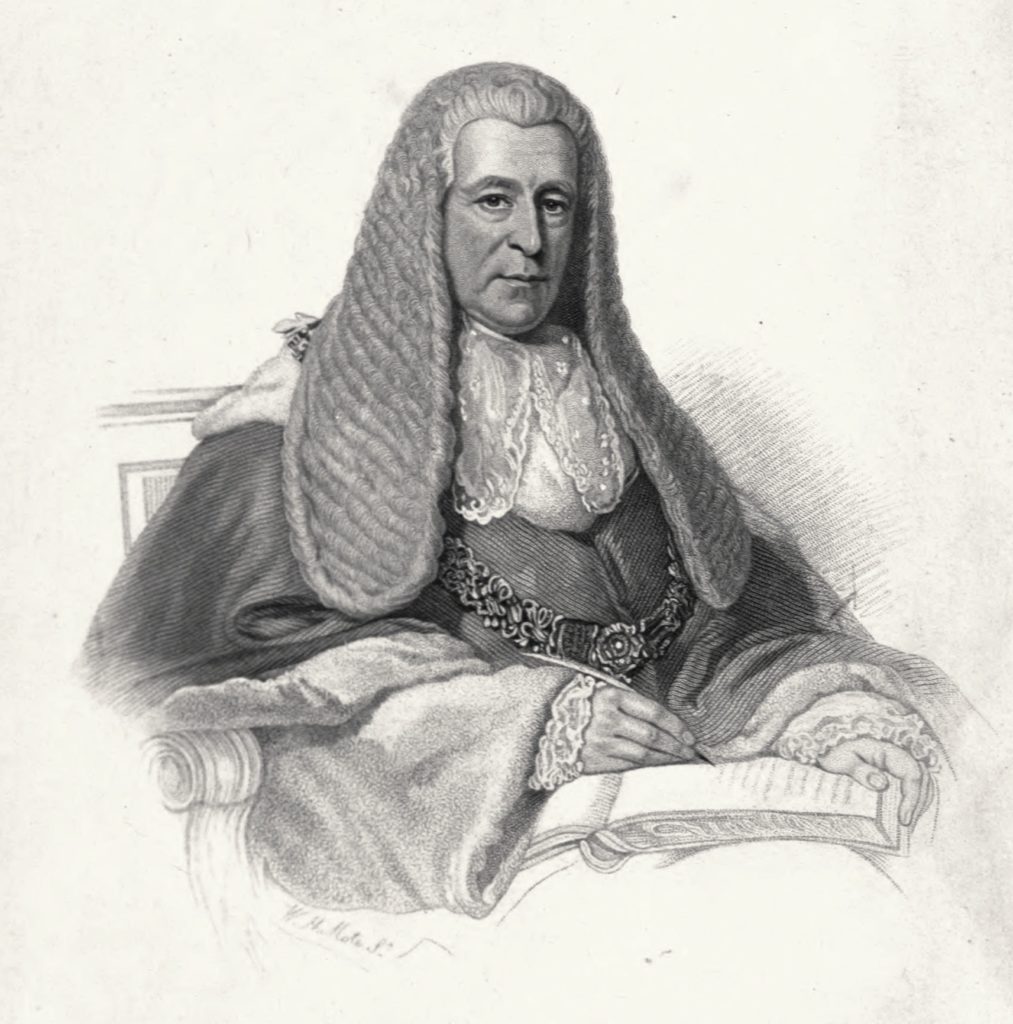 Tom Lefroy in later years, after he had become the Lord Chief Justice of Ireland by W.H. Mote – WikiCommons

Although Austen was never married, she still had her share of romances!

First, there was Tom Lefroy, the Irish nephew of a close family friend, Anne Lefroy. Lefroy came from an affluent family, and although he and Austen began to fall in love, their romance was soon cut short. If Tom married someone in a lower social circle, he would lose his inheritance. When Ann caught wind of the romance, she swiftly brought Tom back to Ireland. If you want to learn more about this story I definitely recommend you check out the movie Becoming Jane starring Anne Hathaway!

Next, Austen had a summer romance with a clergyman in Devon during the summer of 1801. Austen fell in love with the young man, and he made plans to visit the Austen family as soon as he could. Jane took this as a sign that he would propose, and she was thrilled! Sadly, the young man died before he could visit the family.

Finally, a man named Harris Wither proposed to Austen. Feeling flustered and pressured by her family, Austen accepted. She was 27, and in Austen’s time meant that she was soon approaching an age where she could forget about marriage! An Old Maid at 27?! I’m serious! The next day, Austen quickly backed out of the marriage because she wasn’t in love with Wither. Years later she would tell her niece,

“Nothing can be compared to the misery of being bound without Love.” – Jane Austen

9. Jane Austen dedicated a novel to someone she hated 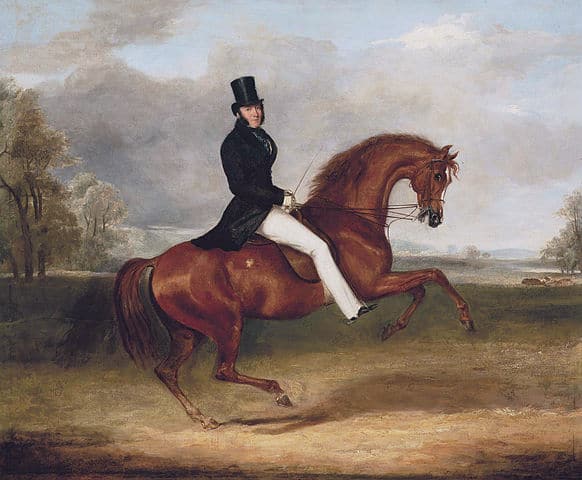 The Prince Regent at the time, George Augustus Frederick by W.H. Davis – WikiCommons

Austen once wrote in a letter that she didn’t approve of the way that the Prince Regent treated his estranged wife Caroline. Strangely enough, she dedicated her novel Emma to him. Why?!

In 1815 Austen was nursing her very sick brother Henry back to health. The family called in a physician who so happened to be the Prince Regent’s doctor as well. When the doctor learned that Austen was the anonymous author of Pride and Prejudice, he told her that the Prince Regent was a big fan of her work.

The physician consequently told the Prince Regent about Austen, and to show his appreciation for her work, let her take a tour of his library with his librarian James Clarke. When Austen was there, Clarke told her that the Prince Regent wanted to let her know that she could dedicate her next novel to him if she wanted. Austen knew that this was more of and order than a suggestion. And so, Emma was dedicated to him! 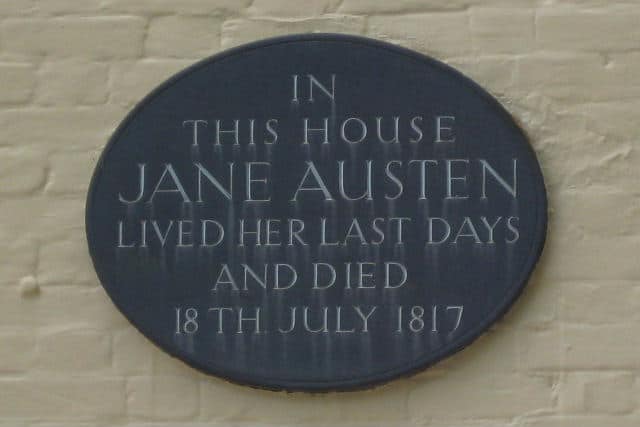 Jane Austen died in 1817 at the age of 41 years old. She had been suffering from an illness that today is thought to have been Addison’s disease, or perhaps Hodgkin’s Lymphoma. She had begun feeling unwell in 1816, and by April 1817 she was bed ridden. She died in July.

An interesting theory surrounding her death emerged in London in 2007. Scholars at the British Library alleged that Austen had been poisoned using arsenic! That’s not to say that some wanted to kill Austen. They thought that she could have drank contaminated water, or mixed up her medications. They based their suspicions on her symptoms, which included skin discoloration and bad eye sight.

In the end, this theory rests widely unsupported. Most scholars and research blame her disease as the cause of her death.

Now you know a little but more about the life of the English author Jane Austen! I hope you’ve enjoyed learning about one of England’s most well loved author’s. She sounds like such an interesting person, and discovering more about her makes me wish I could have been her friend.

If you want to learn more about England’s best and brightest, you should consider joining one of our London walking tours! Click here for more information and to book your tour.