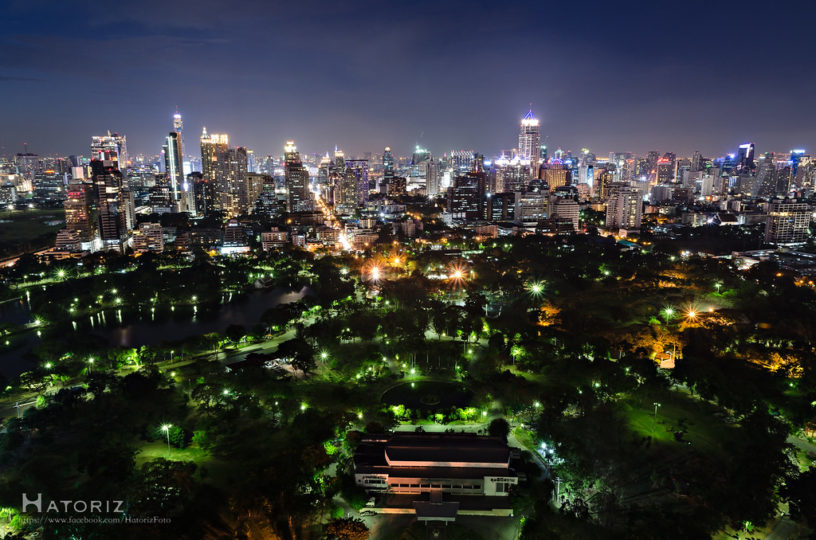 Image by hatoriz from creativecommons.org

Along with Siam and Sukhuvit, Silom is one of the main central regions of Thailand’s capital that the majority of visitors usually flock to.

Silom is right next Sathorn and together they form what is known in general terms as Bangkok’s Central Business District. And while Sathorn is pretty much on the business and residential side of things, Silom is part financial district by day, and a well-known and favourite entertainment and leisure hot spot by night.

Silom is not only one of Bangkok’s busiest areas, but it is also where you will find one of the best green areas in the city, by way of the amazingly well-kept Lumphini Park. 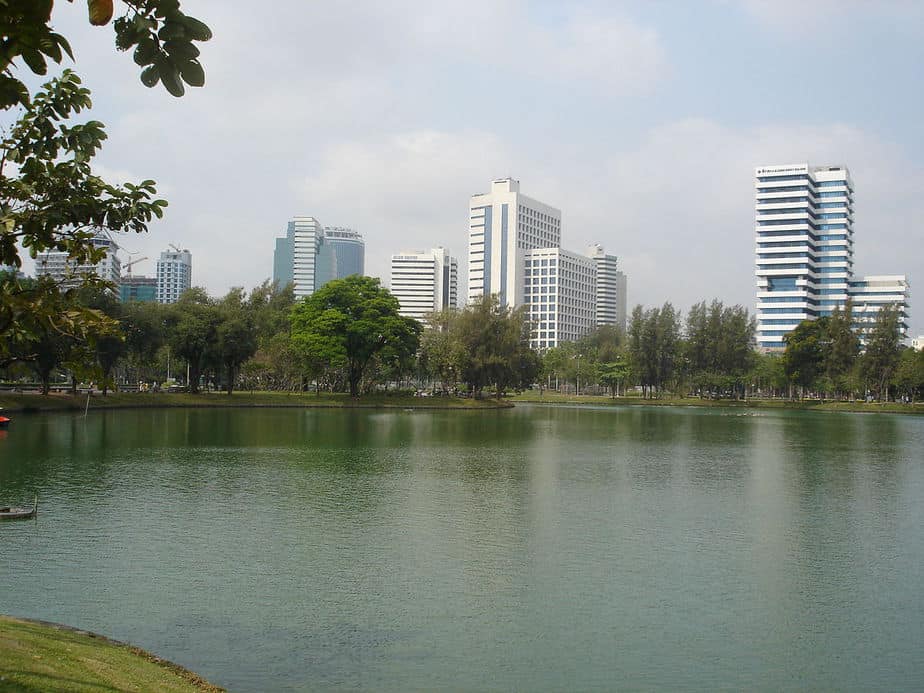 And while it is true that this part of the city has certain areas that have become somewhat on the run-down side over the years, it does also have, by stark contrast, some of the city’s most impressive hotels, bars and restaurants.

That’s not to mention the continuous development of impressive-looking (and even more impressively-priced) residential projects with grand and fancy names in and around the area. 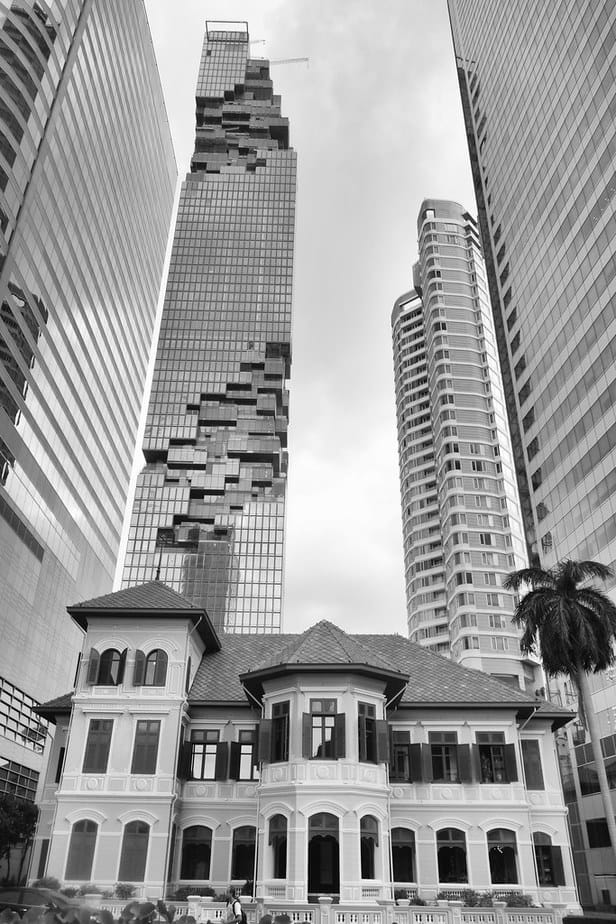 Image by dr burtoni from creativecommons.org

Some of the renowned hotels in the neighbourhood are the SO Sofitel, The Banyan Tree Bangkok, The Sukhothai Bangkok, The Ascott Sathorn Bangkok, W Bangkok, The Eastin Grand Hotel Sathorn, The Pullman Bangkok Hotel G, and The Crowne Plaza Bangkok.

Many of the best hotels in the area feature some amazing rooftop bars, with even more amazing views of the expanse of Bangkok.

Prime examples include The Scarlett Wine Bar & Restaurant at the Pullman Bangkok Hotel G, the Vertigo Rooftop Moon Bar at the Banyan Tree, Park Society at the SO Sofitel; then there is the Zoom Skybar at Anantara Sathorn, and probably the most-visited in recent years – the Sky Bar at Le Bua State Tower. (Check out one of our previous posts on the best rooftop bars in Bangkok for more detailed insights.) 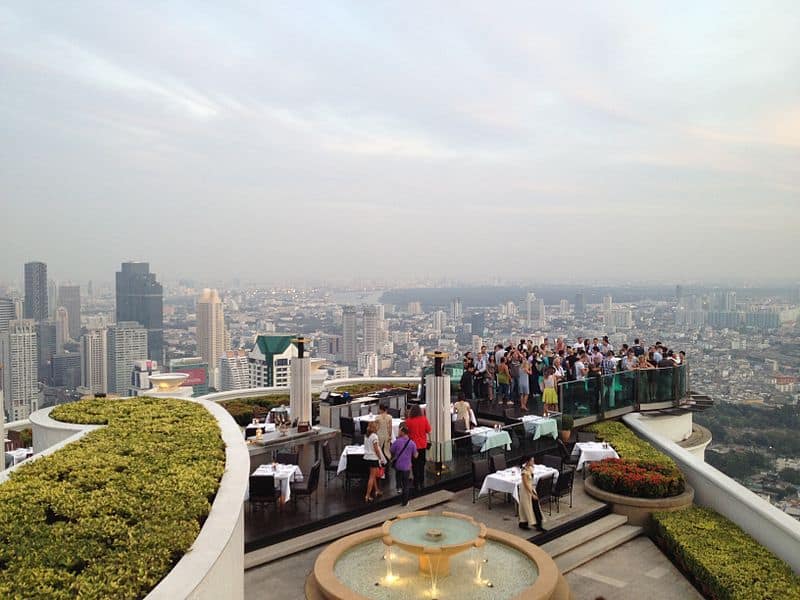 Needless to say, the opportunities for fine dining in the Silom / Sathorn area are now so abundant that you can literally be spoiled for choice.

The area has managed to retain something of its original charm by way of markets and street food, and there is always the famed Patpong stretch of go-go bars that is still hanging in there.

If you are staying in the area and want to buy your own groceries there are a few supermarkets if you need them, by way of a Tesco Lotus is in Chamchuri Square (near MRT Sam Yan Station), a Foodland supermarket in Patpong; then there is a Villa Supermarket on Silom Soi 5, and also on the same road is the Lalai Sap Market, which is popular for inexpensive food and clothing.

Silom’s expanse runs across the area between the south side of Lumphini Park and the Chao Phraya River, with Sathorn forming the far edge of the area. Both areas can be easily reached by public transport metro systems.

The MRT Subway on the Silom Blue Line runs the length of the Silom Road and comprises a station just outside of Lumphini Park’s main entrance. The neighbourhood encompassing Silom/Sathorn is in fact serviced by five rapid transit train stops around which it has rapidly developed in recent years.

It is also served by the BTS (Skytrain) Green Line stations at Sala Daeng, Chong Nonsi and Surasak, and the BTS at Silom is an interchange station with the MRT. 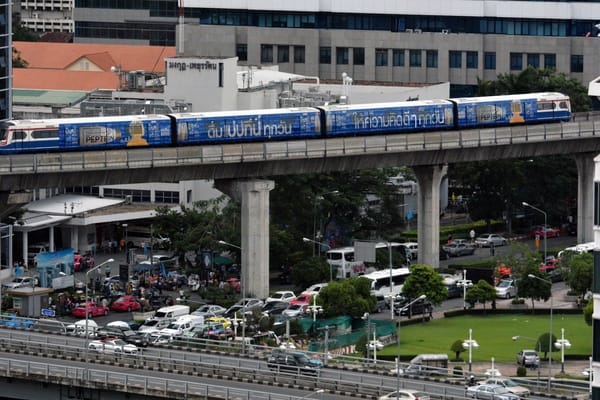 Being one of the most congested areas of the city at the best of times, it is thus not highly recommended that you make your way into Silom or its surrounding expanse at any time close to the famous morning and late-afternoon ‘rush hours’.

Over the last decade or so the area has had more and more of an upgrade in terms of the growing number of modern, high-end developments such as condominiums, luxury office buildings, five-star hotels, fine restaurants and vibrant nightlife.

The Silom/Sathorn area and its surrounding expanse has thus become a much more desirable neighbourhood for both local and international investors alike. With its easy access to Lumphini Park along with all the other amenities, it is now a highly attractive residential location, primarily for high-income Thais along with other Asian and Western expatriates.

On top of that there are now a few high-end lifestyle malls in the region, namely Silom Complex, Baan Silom on Soi 19 and the MahaNakhon CUBE near the BTS Chong Nonsi.

The majority of the condominium development projects in this area of Bangkok are definitely geared towards the hi-end range, with real estate now averaging somewhere in the region of 200,000 – 300,000 baht per square meter, just to give some indication.

Some notable recent examples of such projects include The Ritz Carlton Residences right next to the BTS Chong Nonsi Station. This residential tower is part of Thailand’s tallest building the MahaNakhon complex, a 77-storey tower block that also contains a luxury hotel and retail space.

A Few Other Attractions

There are various attractions in and around the Silom area that are popular with visitors from around the globe, and they all add dimensions of colour, character, and versatility to the area. 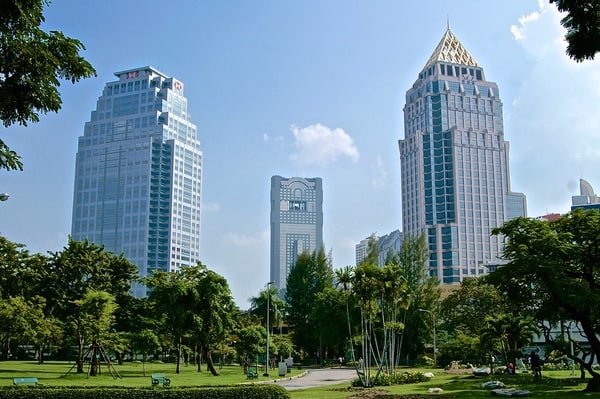 Lumphini Park, along with the 3 parks in close proximity to each other in Chatuchak, is undoubtedly one of Bangkok’s finest green areas. Although it is fairly smack-bang in the middle of what is basically one of the city’s busiest areas, it provides a well-deserved escape from the chaos.

The park contains a lake, complete with rowing and paddle boats, and there is a circuit around Lumphini that is largely used for walking and jogging (in fact it gets really busy with both these activities at certain times).

You’ll find finely-manicured greenery along with a fair few giant monitor lizards that tend to lurk in unsuspecting areas, but are nevertheless harmless. The park is easily-accessible via the Si Lom MRT subway station. 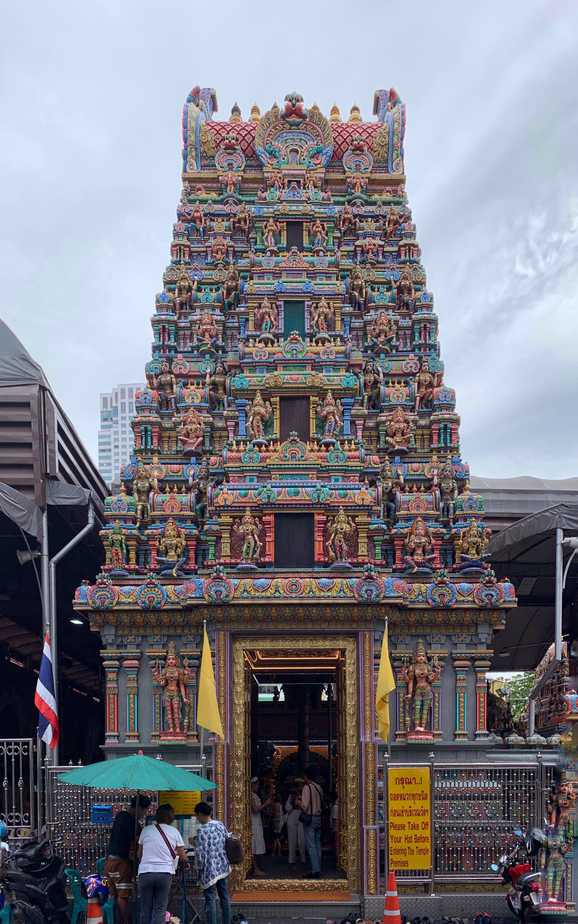 This is a temple not typical of the majority you are likely to encounter in the Thai capital. It is in fact a colourful Dravidian-style Hindu affair, and is located on the corner of Silom Road and Pan Road.

The temple the centre-point of many Hindu-inspired festivals and gatherings which attract not only the large proportion of Bangkok’s Indian community and visitors, but also locals. This is largely due to the fact that Thai Buddhism is actually quite strongly influenced by much Hindu imagery and myth. The inside of the temple contains many beautiful statues of Hindu deities, and many people come here for merit-making.

This might not be the best night market in Bangkok by any stretch of the imagination. It does, however, provide an opportunity for those curious enough to peruse around an area of market stalls that are surrounded by rather seedy and risqué go-go bars that have definitely seen better days. 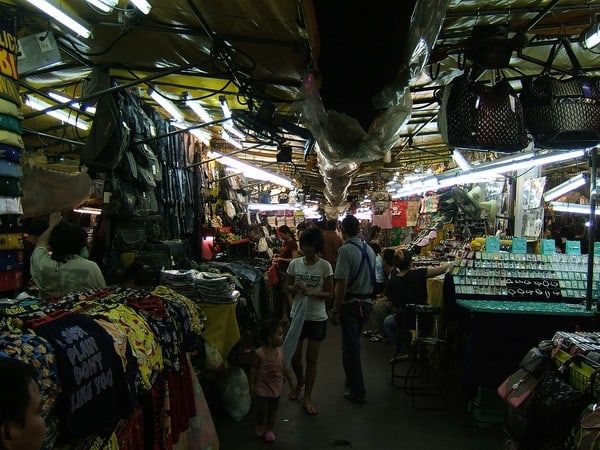 The souvenirs and imitation designer fashion are certainly overpriced in a big way, so if you are seriously considering a purchase then at least learn a few of the finer points of bargaining.

If you are male there was once a distinct possibility that you would be harassed or harangued into popping into one of the bars (for a severely over-priced drink) if you got close enough, although these days it happens less as if there are any girls outside they are generally too engrossed in their mobiles!

The Blue Elephant restaurant (www.blueelephant.com) is located on a busy Sathorn Road, in a 100-year-old Bangkok colonial mansion. It is one of Bangkok’s most well-known high-end Thai restaurants, and it also houses a prominent cooking school. 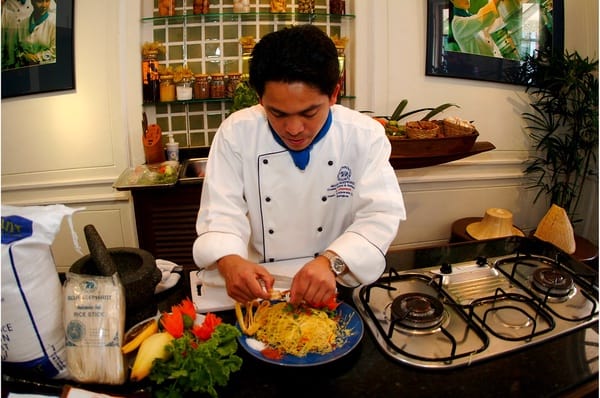 This is a great place to learn Thai cooking, and you can prepare up to 5 dishes per day in each class. The classes are taught by renowned Thai chefs, and you will receive a certificate upon completion of a course. Classes are usually held morning and afternoon over 4 days of the week (including weekends).

If you saw one of our previous posts on the various churches in Bangkok, you would have noticed the sheer splendour of the most popular Roman Catholic Cathedral in the city.

The French-built Assumption Cathedral stands out from the other surrounding Bangkok buildings somewhat due to its impressive Romanesque architecture. The building dates back to the early 19th-century, although it has undergone various renovations since its completion. Its interior is equally impressive, and several prominent Bangkok educational institutions have grown from the cathedral. 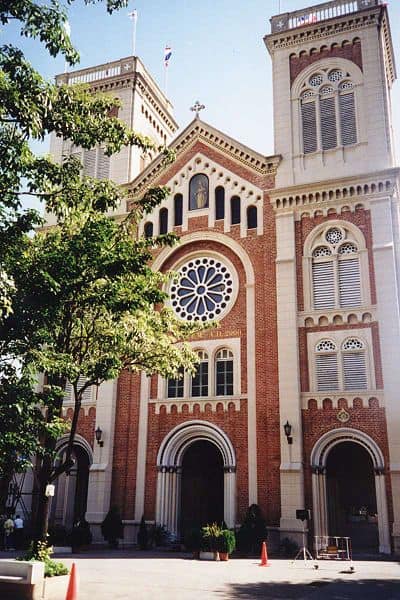 Image by Ahoerstemeier from wikimedia commons

Services run every day but non-participating visitors are always welcome, and the address is 57 Oriental Avenue, Bang Rak.

The building is about 3 km away from Silom Road but can easily be reached in just a 5 or 10-minute taxi drive, a 30-minute walk, or by BTS (it is close to the Saphan Taksin stop on the National Stadium Line).