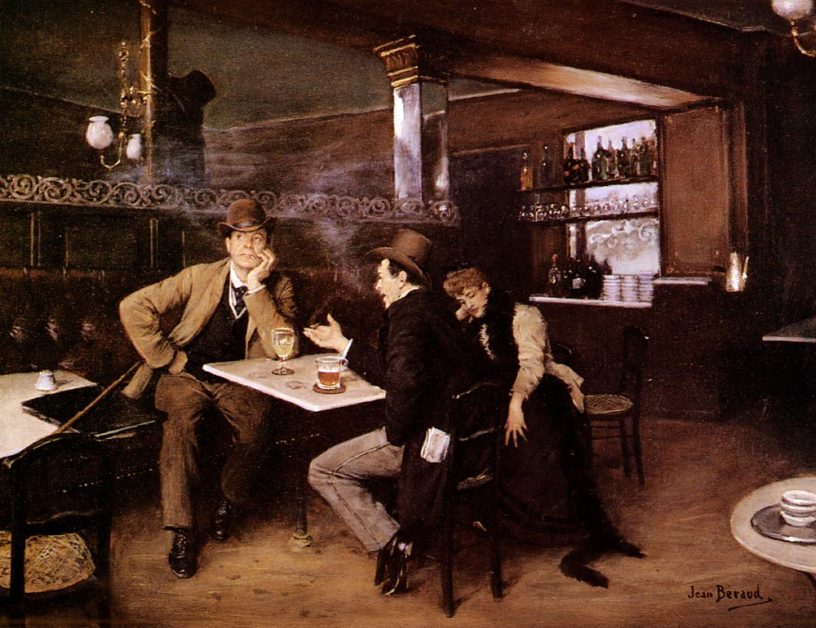 Paris is filled with restaurants, some uncannily similar to the next, but only a handful of them qualify as authentic bistros under French culture. A bistro, under Parisian historical terms, is a very small eating institution where meals are simple, moderately priced and served in a modest setting where alcohol is always available.

In Paris, there are bistros all over the place. Some open early, some later, and some never actually close (see my roundup of the best 24 hour bistros in Paris here). Ready to eat?

Because it first opened back in 1964, Chez Georges is now a bistro institution in Paris, and can afford to close their doors for the better part of the day, allowing diners in for essential mealtimes only.

Situated in the heart of the city, Chez Georges operates in authentic bistro style with banquet tables where you dine with strangers to your left and right, just how it was in the old days. 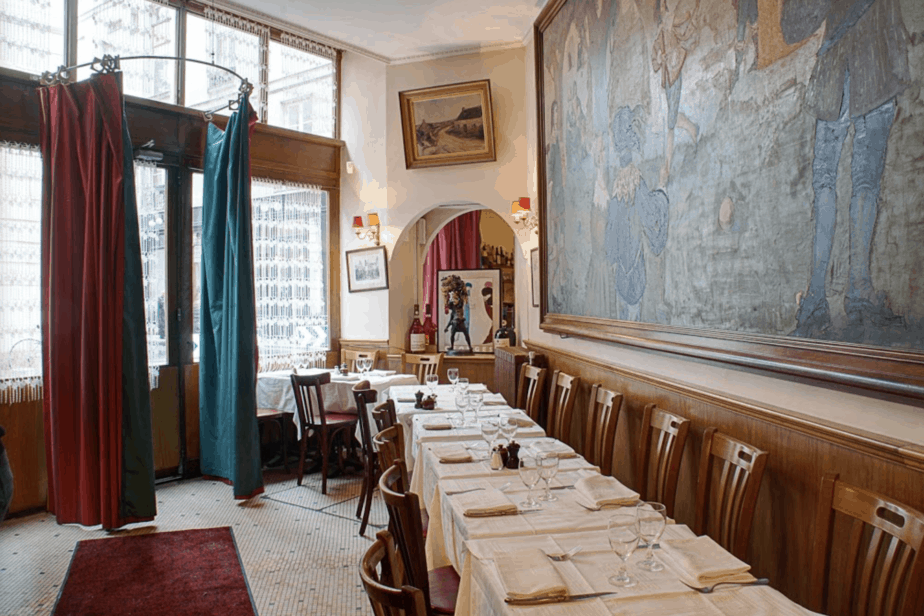 The menu is handwritten daily, and depends on the produce available to the chef at that time. Portions go for abut €12 a plate, which is pricy considering the general culture around bistros in Paris, but they are generously sized and are actually quite suitable for sharing between two and even three people.

A checkerboard floor, dark brown antiques, and the most charming owners you’ll ever meet. Le Bistrot d’Henri is a hidden gem on the Left Bank that is fast becoming one of the most sought after places to eat in all of Paris.

Looking for more things to do on the Left Bank in Paris? Click here

A reservation wasn’t an essential thing a few years ago, but today you won’t get in without one. This is one the most home-like, coziest places to eat in all of Paris, and the food is bistro fare beyond your wildest dreams. 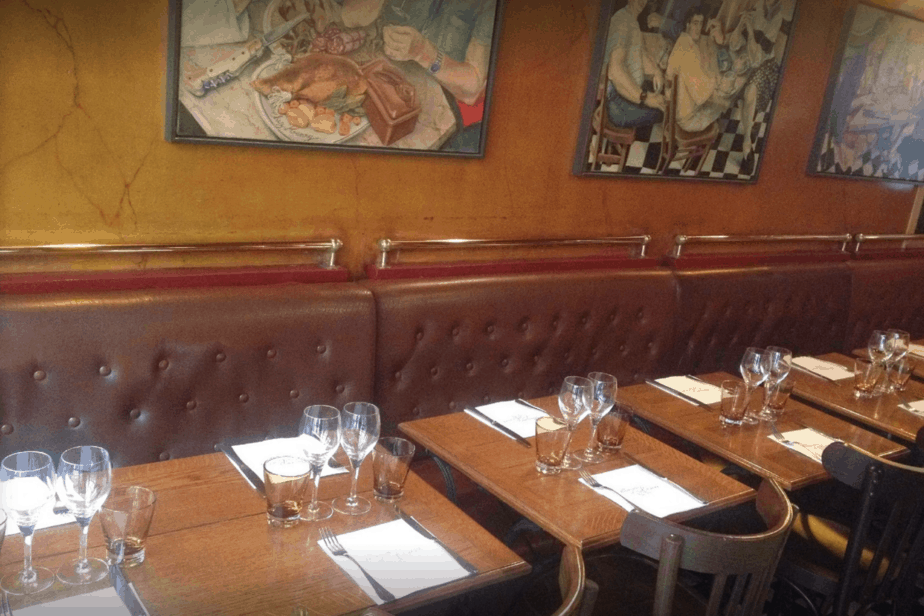 Many consider their beef stew to be the best in all of Paris. Like most bistros, this is not a place to venture if you don’t eat meat or fish.

A short walk from the aforementioned bistro is another gem that I would be a fool not to mention.

Le Comptoir du Relais is one of Paris’ more casual bistros, albeit incredibly classic and traditional in every sense. Some would describe the decor as typical or uninviting, but once you’ve been seated the dining experience tends to take on a whole life of its own. 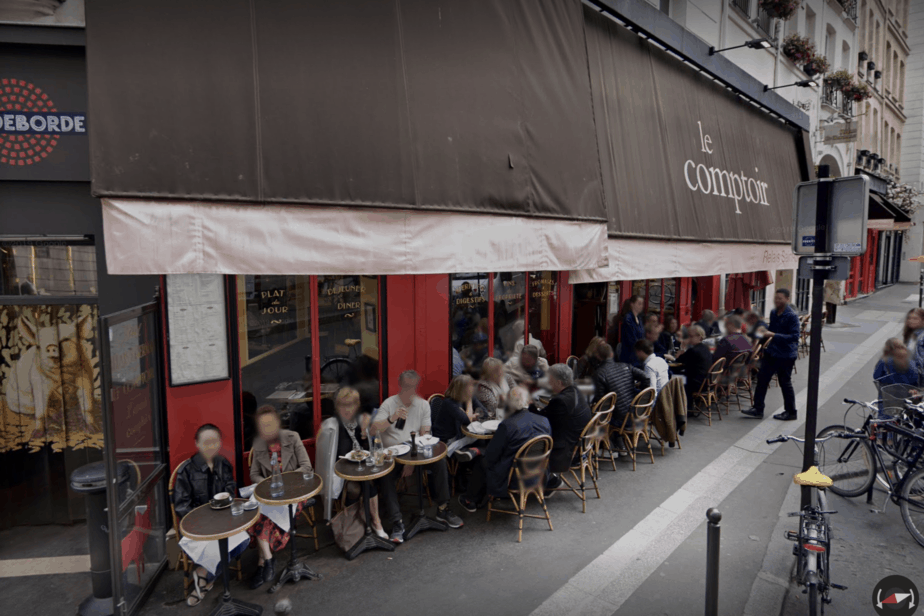 Dinner has become quite the affair at le Comptoir, and you’ll need a reservation if you want any hope of being seated before 10pm. Lunch is a little more lenient and you’re likely to get away with simply walking in.

Street seating is an option in the warmer months, and it’s wonderful to watch lovers stroll the streets of the Latin Quarter as you dine and drink the night away. For the wine lovers, their cheapest red is also their best red (top tip!).

Click here for the best restaurnats in the Latin Quarter!

Okay, look alive as we delve into this bistro dining spot, as there are two locations and it can get incredibly confusing.

Au Pied de Fouet is situated in Paris 8th arrondissement. The bistro we want is the “traditional” location, where plates go for between €3 and €10. A twenty minute walk away is their second location with the same name. This is their ‘brasserie’ venue, and plates retail at considerably higher while the vibe of the space is far more underwhelming. 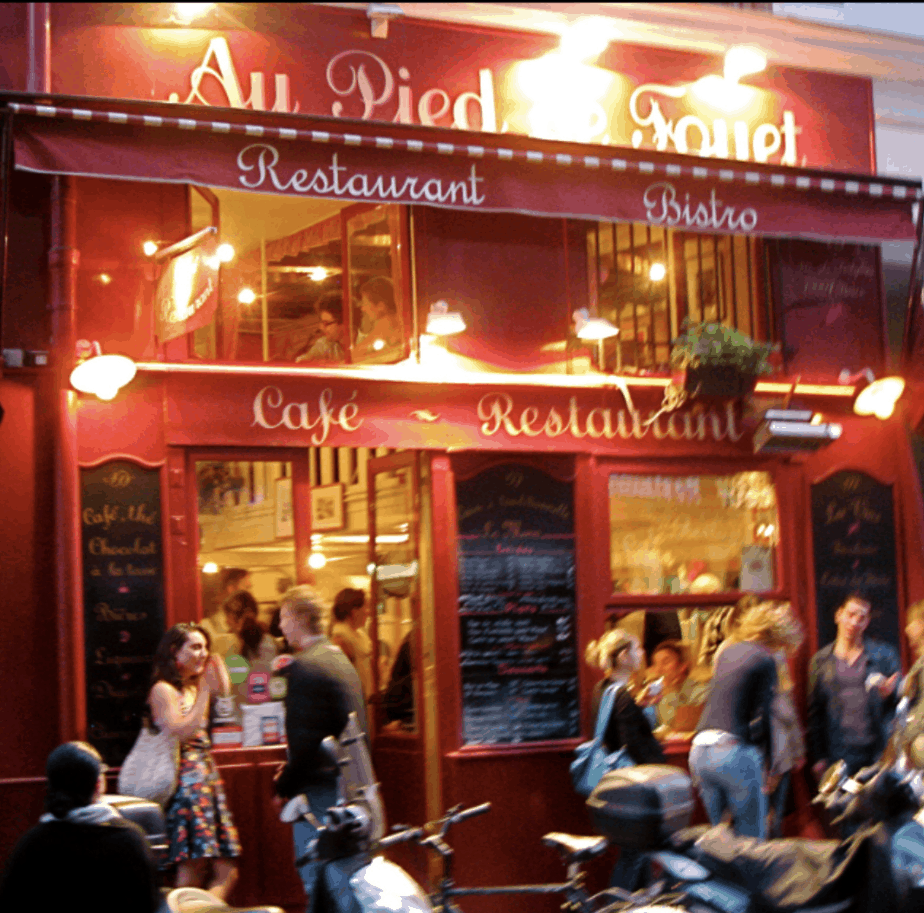 At Au Pied de Fouet, bistro dishes are the specialty and little time is spent worrying about bells and whistles. They are known for their duck dishes, as well as their consistent use of only local and seasonal ingredients.

The space is small and they do not take reservations. It’s first come first serve, and there is always a line to get in. The wait is worth it, rest assured.

A classic bistro with a modern flair, this spot is the brainchild of a man named Xavier Denamu; a restauranteur who is responsible for a lot of dining hotspots in le Marais and surroundings.

For 10 great things to eat in le Marais, click here!

The focus here is bistro food made with only organic ingredients. This is uncommon in Paris, and as a result it’s become the chosen hangout for both locals and tourists alike (also uncommon in Paris). 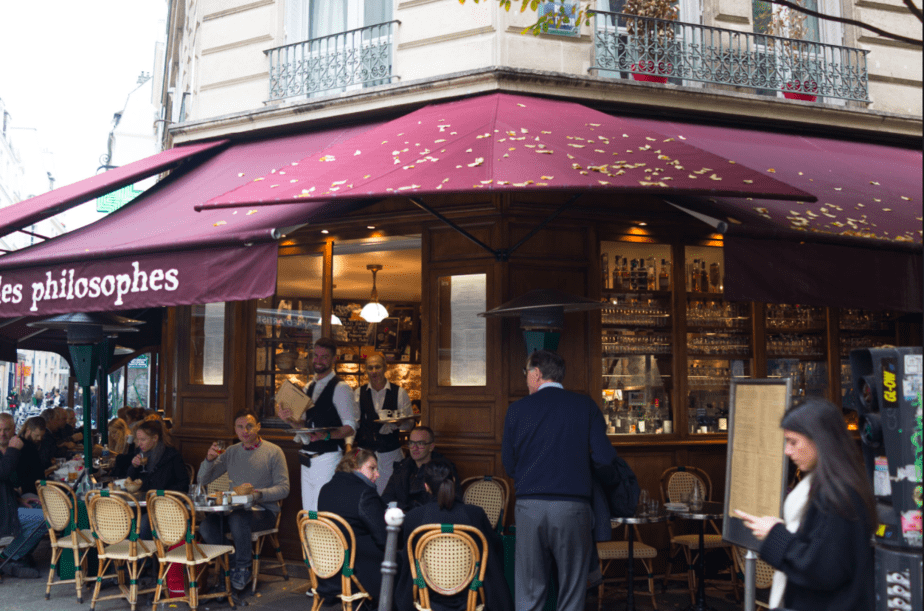 This is a spacious bistro. I recommend the French onion soup before you try anything else on the menu — it’s quite special.

Opening Hours: Monday to Sunday — 9am to 2pm