5 Best Movies About Joan of Arc 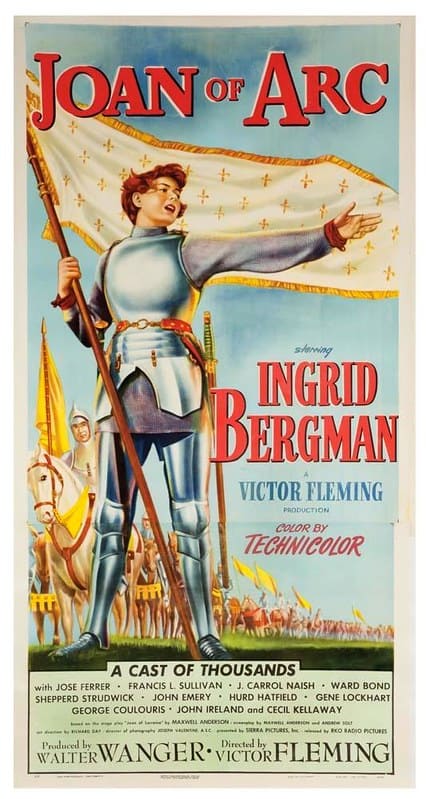 5 Best Movies About Joan of Arc

Joan of Arc is perhaps one of the most famous French women to exist. If you’ve been living under a rock, or if you only know the name, let me let you a little bit more about her story!

In France, she is sometimes called the La Pucelle d’Orléans (The Maid of Orléans in English), and is also considered to be a national heroine. Her most triumphant moment was when she led the French in a battle against the English at Orléans during the Hundred Years’ War…and won! She was just 18 years old at the time. She lived in the 15th century.

Supposedly, Joan of Arc was visited by various religious figures such as the archangel Michael, Saint Catherine of Alexandria and Saint Margaret. The story goes that they urged her to go to battle for France, and that it was God’s will that she fight.

Joan of Arc met a very tragic death after this victory. She was captured a year later by the English and was labeled a heretic and a witch. She was then burned at the stake. Centuries later, in 1920, she was canonized as a saint in the Roman Catholic Church.

In a tale of victory not only for the French, but for women everywhere, Joan of Arc broke down gender barriers and fought for her country. At the time, women were not allowed to go to war, and so Joan disguised herself as a man in order to fight. 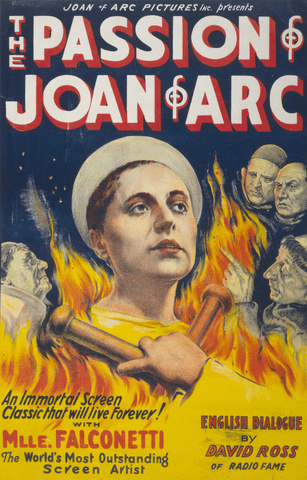 This is the oldest movie on my list and probably the most well known! The Passion of Joan of Arc was released in 1928 and was directed by Carl Theodor Dreyer. It is a French movie, but also a silent one, so all of my English speakers out there can enjoy it without subtitles!

Renée Jeanne Falconetti stars in the movie as Joan of Arc. In general, the movie made a splash for its cinematic production, and it often appears on lists of the best movies in history. It continues to be admired and referenced today!

The movie focuses on Joan of Arc’s time of captivity in England before she was eventually burned at the stake. The movie also depicts her trial. The film came about only 8 years after Joan of Arc was canonized, and marks a sort of renaissance of interest in her.

Watch this movie if: you’re interested in learning more about Joan of Arc’s final days.

2. The Messenger: The Story of Joan of Arc (1999) for an epic historical drama 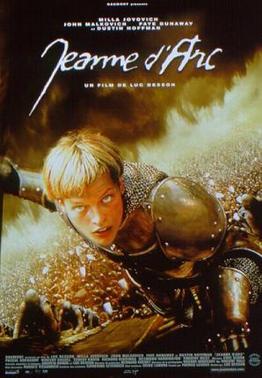 The Messenger: The Story of Joan of Arc (1999) Copyright © 1999 by Gaumont Pictures – WikiCommons

The Messenger: The Story of Joan of Arc is a 1999 movie directed by the famous French director and producer Luc Besson. It’s a French movie, but it is in English. Milla Jovovich plays Joan of Arc, and she does it exceptionally well, in my opinion.

This movie follows the life of Joan from her childhood, to when she began seeing visions, all the way until the battle at Orléans and eventually her capture and death. The movie gives more insight into why Joan may have felt compelled to battle against the English: her family was personally persecuted by France’s enemy at the time.

The film also depicts the moment when Joan speaks with the French king at the time, Charles VII, who is played by John Malkovich. It also shows the lengths that the English went to in order to kill her.

Watch this movie if: you like epic historical dramas. In true Besson fashion this movie is filled with excitement. 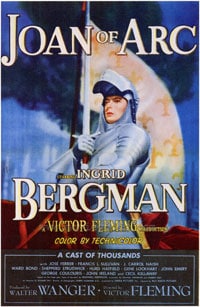 Joan of Arc, a 1948 film directed by Victor Fleming tells the story of Joan as seen through a religious eye. It stars the actress Ingrid Bergman as Joan, and was actually originally a Broadway play which also starred Bergman.

Maxwell Anderson wrote the original script for the Broadway play, and was tasked with also writing the movie screenplay. It is the only reproduction of an Anderson play in which he wrote the screenplay himself. It was also Fleming’s last movie, as he died in 1949.

This movie definitely focuses on Joan as a saint. There are many dramatic shots of churches and manuscripts, and the story begins with a dramatic voice over describing her canonization.

Watch this movie if: you admire the fact that Joan of Arc is a canonized saint. 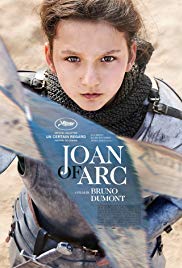 Joan of Arc is a 2019 French film directed by Bruno Dumont, and stars Lise Leplat Prudhomme as Joan of Arc. It may be in French, but you can easily find the movie with English subtitles!

The movie is actually a sequel to a 2016 movie called Jeannette: The Childhood of Joan of Arc, which, you guessed it, tells the story of Joan of Arc’s childhood, which shows Joan’s first experiences with religious visions. I definitely recommend this one as well!

But, let’s get back to Joan of Arc! The movies continues where the first one left off, after Jean has been captured for her involvement in the war. She was actually put on trial for heresy before a group of French politicians that decided to create an alliance with the English. They were called the Burgundians.

In the movie Joan attempts to defend her actions against the English. She is portrayed as a very young girl, which is slightly unrealistic as we know that she was 18 years old when she fought at Orléans, and 19 years old when she was killed.

That being said, the fact that a child plays Joan also reminds us that she was fairly young when she went to battle to fight for her country.

Watch this movie if: you want to understand the inner workings of Joan’s trial with the Burgundians. 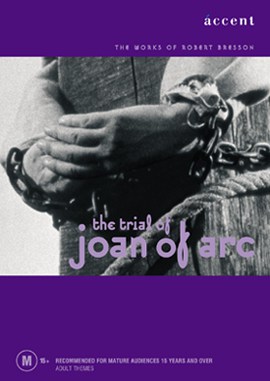 The Trial of Joan Arc is the last movie on my list, and it is also a French one. It was released in 1962, and was directed by Robert Bresson. The film stars Florence Delay as Joan. Like with most of Bresson’s films, he cast relatively unknown actors. It is hailed as one of his most renowned movies!

The movie is sometimes compared with another on my list, The Passion of Joan of Arc, although Bresson was known for expressing his dislike of the 1928 movie.

The movie follows Joan of Arc’s last moments on earth as she is put on trial. It shows the gruelling measures that the Burgundians and the English undertook in order to convict her. Joan remains strong in her faith, arguing that she is a good Christian and that God Himself urged her to go to battle.

In a moment which gives more of an explanation as to why Joan was burned at the stake, she renounces her faith. This is only after she is cruelly tortured. After she realizes what she has done, she immediately tries to reclaim the faith that she has given up. She is denied, and is burnt at the stake as a witch.

Watch this movie if: you want to better understand why Joan of Arc was murdered.

There you have it, my 5 favorite movies about the French heroine Joan of Arc. I think that most people have heard her name, but many don’t know the details of her life and her final days. I definitely recommend you check out the 5 movies I’ve mentioned above if you want to learn more about her!

Thankfully, France and England are no longer mortal enemies constantly at war. But, in watching and learning more about the environment of Europe in the 15th century, you’ll better understand why Joan of Arc was so passionate about going to battle against the English!

If you’re planning a trip to Paris, I definitely recommend you visit our website to discover (hehe!) all of our walking tour options here at Discover Walks. Our tours are led by expert local guides who are sure to impress you with their knowledge of France and Paris. I promise they know a thing or two about Joan of Arc! Click here to learn more and to make your booking.

So, in the meantime, get on your comfy clothes, pop some popcorn and get ready to add a bunch of movies to your “must-watch” lists! I hope you enjoy!