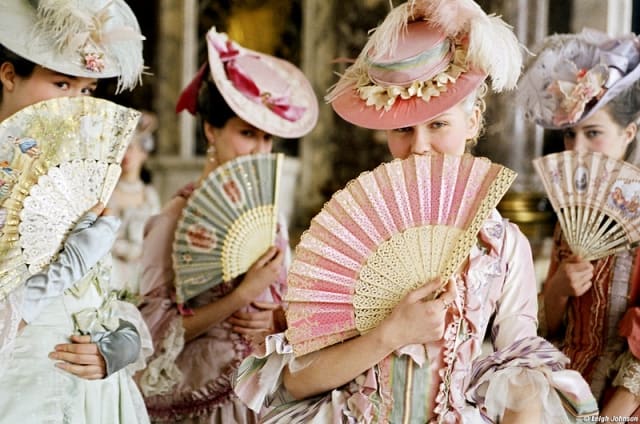 If I had to choose a French queen that interests me the most, I would have to go with Marie-Antoinette, the ill-fated wife of King Louis XVI. The pair were the last monarchs of France before the French Revolution struck in 1789.

Marie-Antoinette got a really bad rap, as being a frivolous queen who cared more about fancy dresses and parties than the fate of her citizens. While I will admit that the queen certainly had her head in the clouds, I don’t think she was as deliberately evil as people can sometimes make her out as.

Her most famous quote, “Let them eat cake” has been debunked as a form of propaganda against her. If she was at fault for anything, it was that she showed no real interest in politics or her people.

She didn’t seem to even realize that the people of France were starving, and therefore didn’t feel she was doing anything wrong when she spent much of the tax payers money on herself. I think its also important to keep in mind that Marie-Antoinette had no sense of what it was like to live in the “real world,” that is to say the word of non-royals.

She was just 14 years old when she came to France, and before she arrived she lived in the royal court of Austria, her home country. She was 19 years old when she took the throne. She was known for her extravagant spending, wild parties and love affairs. I’m not excusing her behavior, but if you understand her roots its easier to understand her as a queen. I digress!

There are a handful of movies out there about Marie-Antoinette and her life in the French court. Keep reading for my 4 favorites! 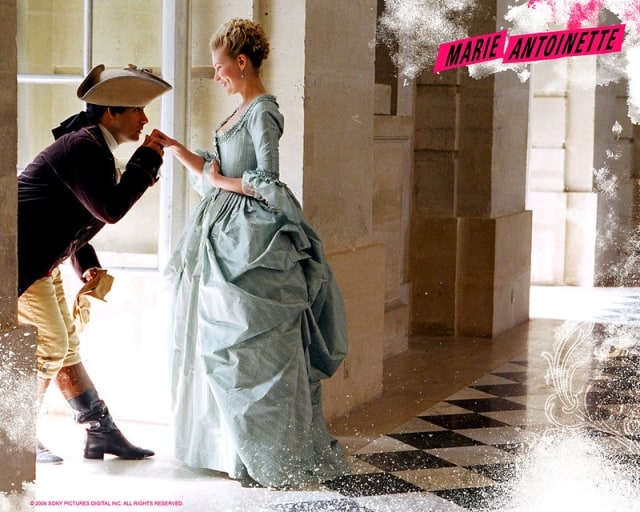 I’ve listed the 2006 movie, Marie Antoinette by director Sofia Coppola as my number 1 best movie about Marie Antoinette because it is my favorite! A fun personal fact: years before I moved to Paris, this movie is the first thing that really sparked my interest in France! So, I guess I owe a huge thanks to Ms. Coppola for this film as moving to Paris went on to completely change my life…for the better!

Enough about me, lets get back to Marie Antoinette. The movie stars Kirsten Dunst as Marie-Antoinette and Jason Schwartzman as King Louis XVI.

The movie follows the life of the French queen from when she arrived in the country as a teenager (she was just 14 years old when she married), her wedding day, her life in French court, the birth of her children, an affair that she supposedly had with a Swedish count named Axel von Fersen, and finally her final days as queen before the storming of Versailles.

The costumes are incredible, the film was actually shot at Versailles, and in a sweet moment of juxtaposition, the soundtrack to the movie is filled with pop songs from the ‘80s. It’s a beautifully shot movie and I recommend it to everyone!

Watch this movie if: you love quality costume design and cool music. 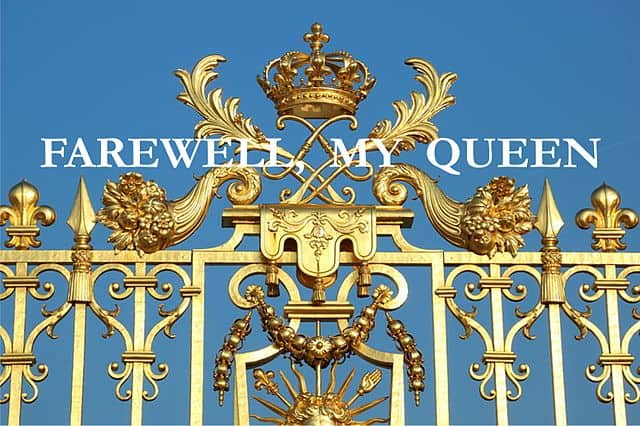 Farewell, My Queen (Les Adieux à la reine in French) is a 2012 French movie directed by Benoît Jacquot about the final days of the French court as seen through the eyes of a servant named Sidonie Laborde. Marie-Antoinette is played by Diana Kruger (who I actually had no idea spoke French before seeing the movie!), and Sidonie is played by the celebrated French actress Léa Seydoux.

As the movie goes on, the news of the storming of Bastille reaches Versailles. Let the last minute preparations to flee from the château commence! Marie-Antoinette convinces Sidonie to disguise herself as the Duchess of Polignac, one of the queen’s “favorites” and closest friends, to help the real Duchess escape to Switzerland.

Watch this movie if: you want to learn more about the supposed lesbian relationship of the former Queen of France. 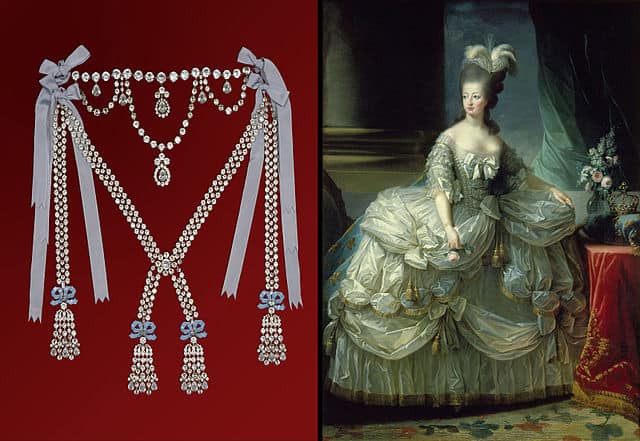 The Affair of the Necklace is a 2001 movie by director Charles Shyer which stars Hilary Swank. The story follows the life of the main character, Jeanne de Saint-Rémy de Valois (played by Swank) but is also centered around Marie-Antoinette’s court. The best part of this one? It is inspired by a true story!

As the story goes, Jeanne was an impoverished member of the Valois royal family who was orphaned at a young age. The French government took her families home in order to pay off their debts. Jeanne pleads with Marie-Antoinette to get her family’s home and fortune back, but refuses her. Jeanne decides to get what she wants her own way!

Jeanne gets involved with some sketchy characters to perform one of the most famous heists in French history. When King Louis XV was still king (that’s King Louis XVI’s father), he commissioned an enormous 647-diamond necklace to be made for his mistress, Madame du Barry. The king died before the necklace was completed.

Marie-Antoinette was then offered the necklace, but because she knew its history she declined. Jeanne decides to steal the necklace for herself in an attempt to recuperate her family’s lost fortune.

Jeanne knows that a French Cardinal named Cardinal Louis de Rohan (played by Jonathan Pryce) was hoping to get back into the good favors of Marie-Antoinette. She goes on to convince him that she is one of the queen’s favorites, and begins to forge letters from the queen which are addressed to the Cardinal.

The Cardinal goes on to buy the 2,800-carat diamond necklace, thinking that he is doing so for the queen. I won’t tell you what happens next because, well, spoilers and all of that!

Watch this move if: you’re interested in tales of deception, theft and jewellery. 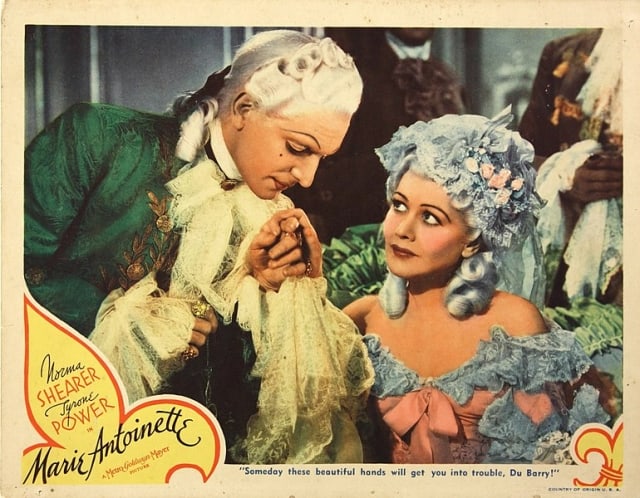 The last movie on my list is one of the first movie’s ever made about Marie-Antoinette! It was directed by W. S. Van Dyke in 1938 and is aptly called Marie Antoinette. It was also one of the most expensive movies of the 1930s, with a budget of $2 million.

Even after they are married, they fail to consummate their relationship for a long time. This is understandable as the future king and queen were just 15 and 14 years old respectively when they were married.

Marie-Antoinette has a very strained relationship with the king’s mistress, Madame du Barry. Du Barry went so far as to send her an empty cradle and a note criticizing the fact that she had failed thus far to produce an heir.

The film goes on to follow the affair that Marie-Antoinette has with Axel von Fersen, its effect on her family, and the final days of the French court before the Revolution. It also shows the relationship the queen has with her husband and children (as they do eventually have a son and a daughter).

Watch this movie if: you want to learn more about the inner workings of the French royal family of the 18th century.

Get out your popcorn folks, you’ve got some movies to watch! I hope you’ve enjoyed learning more about my 4 favorite movies about the former French queen Marie-Antoinette.

I’ll let you make your own opinions on her, because you already know mine! Just try to keep in mind that each of these films are dramatizations, and so they portray the queen in ways that she may have not even resembled.

If you want to learn more about the queen on a more historical level, I definitely recommend the biography, Marie Antoinette: The Journey by Antonia Fraser. which was actually the inspiration for the 2006 Sofia Coppola film Marie Antoinette. Told you it was my favorite!

And, if you’re in Paris and you want to learn about more famous French personalities and monarchs, why not join one of our walking tours? Our local guides are sure to impress you with their expansive knowledge!