I probably don’t have to tell you that crêpe culture is taken very, very seriously in the French capital.

Pastries in general reign supreme in this part of the world and as you roam the streets you’ll pass by the dozens of patisseries with their display cabinets packed to the brim. Tarts, cakes, croissants; you name it.

Lurking near every patisserie, is a crêperie. Ready and waiting to serve you a piping hot buckwheat pancake with the sweet or savory filling of your choice. 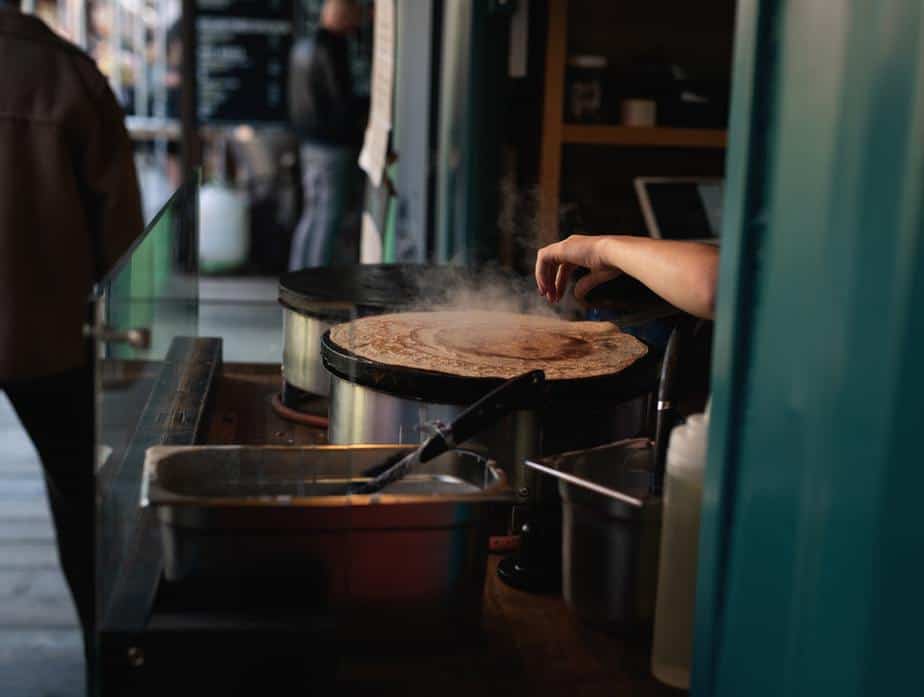 Some crêpes can be purchased while on the go, particularly sweet filled ones. They are usually folded up into take away pouches that you can eat while enjoying a free guided walking tour of your favorite Parisian neighborhood.

Other crêpes, particularly savory ones, require diners to sit down in order to properly enjoy the dish. The fillings are usually more dense and bigger in portions & cannot be held upright in a pouch.

To save you the trouble of where, what and how; here are the top 5 places to eat crêpes in the heart of their home nation, Paris.

The Josselin Crêperie comes highly regarded within the world of Parisian crêpes. You’ll find it in the heart of the Montparnasse district, an area known to be absolutely saturated with crêpe vendors day in and day out.

This particular one is about a minutes walk from the Montparnasse Tower; a great attraction from which to view the Parisian skyline from a birds eye level. 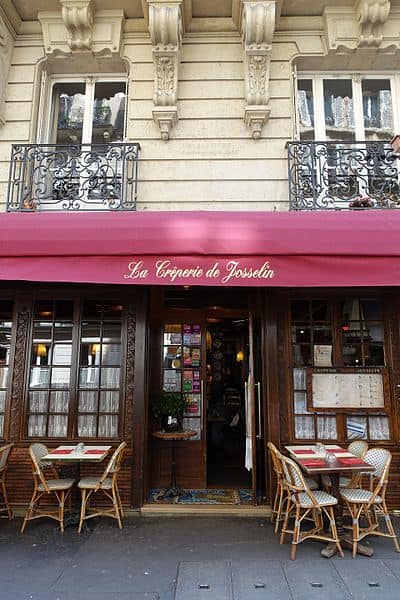 The Josselin Crêperie serves up fresh, hot crêpes in a sit down style restaurant. Their specialty are their savory crêpes, but they do have a number of sweet options to satisfy those in need.

The crêpe originated from a town in France called Brittany. It is rumored that Josselin makes crêpes as close and authentic to the ones that originated there years ago. It’s hard to imagine getting a crêpe wrong, but it does happen, so finding consistent, hidden gems like this are always a treat.

Coffee and crêpes as a specialty under one roof? What more could you ask for.

You’ll find Coffee Crêpes in the heart of the first arrondissement, right on the banks of the Seine not far from the Louvre.

It’s a spacious crêperie with enough seating area to accommodate the crowds that tend to filter in from the surrounding museums and attractions. I enjoy the street seating most, but the inside is equally as nice. 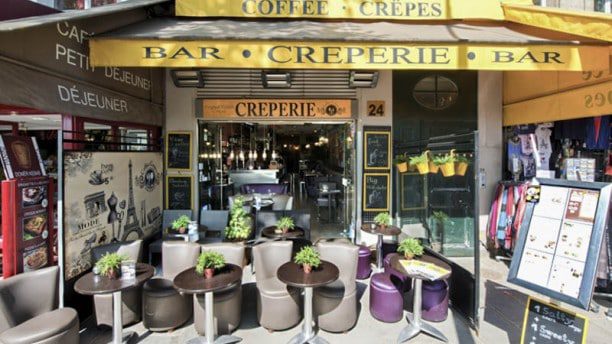 This is where you’ll come for brunch or an afternoon sweet treat after a day of exploring the 1st. If you really want to treat yourself, try their caramel crêpe and ask them to add strawberries.

The menu extends from starters right though to mains and dessert, so there is literally a crêpe for every stage of hunger. Naturally, grab coffee with your order!

Somehow over the years the district of Montparnasse made a name for itself as the crêpe hub of Paris. Whether you’re sitting down to dine or roaming the street, these thin meals are never far from reach. 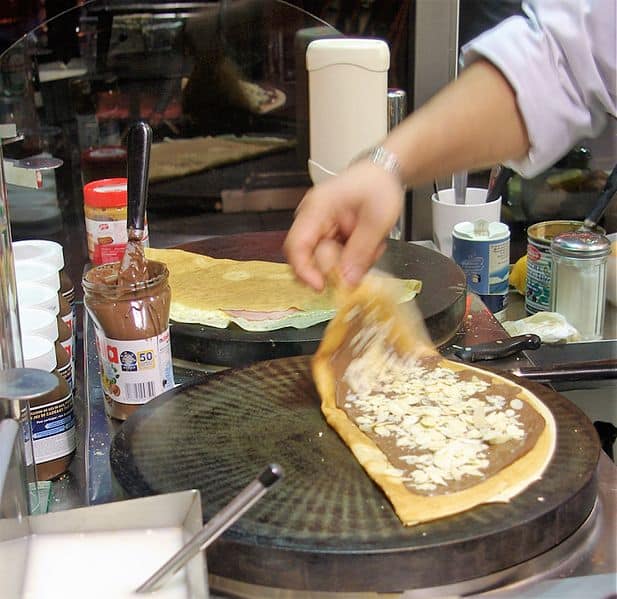 Years ago, Brittany locals made their way into the big city in search of somewhere to resettle. Montparnasse was an affordable base from which to start and thus saw the birth of many successful crêperies in the area.

When you are hankering for crêpes as authentic as they come, take a walk around the rue de Montparnasse and Boulevard Edgar Quinet. Crêperie Ti Jos is my favorite and a bit of a blast from the past in terms of decor as well! Montparnasse is a beautiful part of Paris to see by foot (Read more about Discover  Walks walking tours).

Travelers from far and wide love coming to Au P’tit Grec for their crêpe fix. You’ll find it on the Left Bank, not far from the entrance to the Botanical Gardens of Paris.

Because of its word-of-mouth popularity be prepared to face queues onto the street, particularly during peak eating hours of the day. The crêpes are in takeaway style, so you’ll be able to get your food and go as there is not much seating area available. 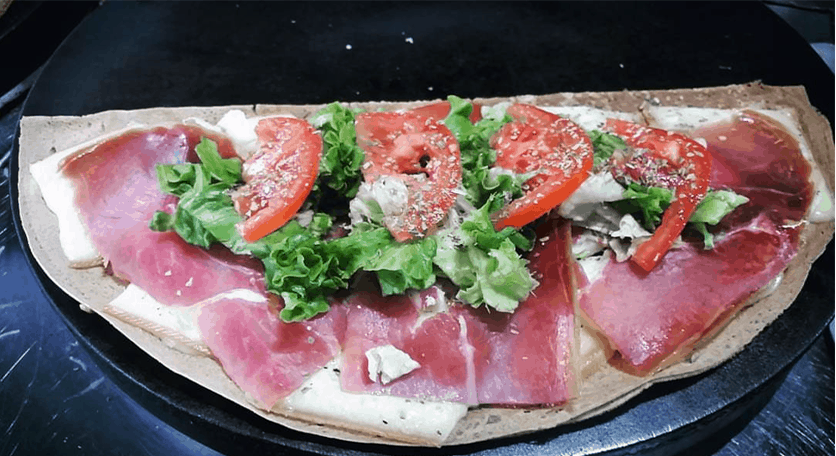 The best part about Au P’tit Grec is that they stay open late; you can show up at midnight and order all of the menu.

The crêpes here are huge. I like to go with a friend and get one savory and one sweet option and then share them between us. It’s like a meal and a dessert all in one!

The Botanical Gardens are the perfect place to enjoy your takeaway crêpes while strolling this side of the river.

A problem with the best crêperies in Paris is that they tend to pull crowds at all hours of the day. This gem of a restaurant is no different, and to make it worse it’s located in the Marais district — people everywhere!

There must be a method to the madness, because rain or shine the people will queue hours if necessary just to eat at Breizh. 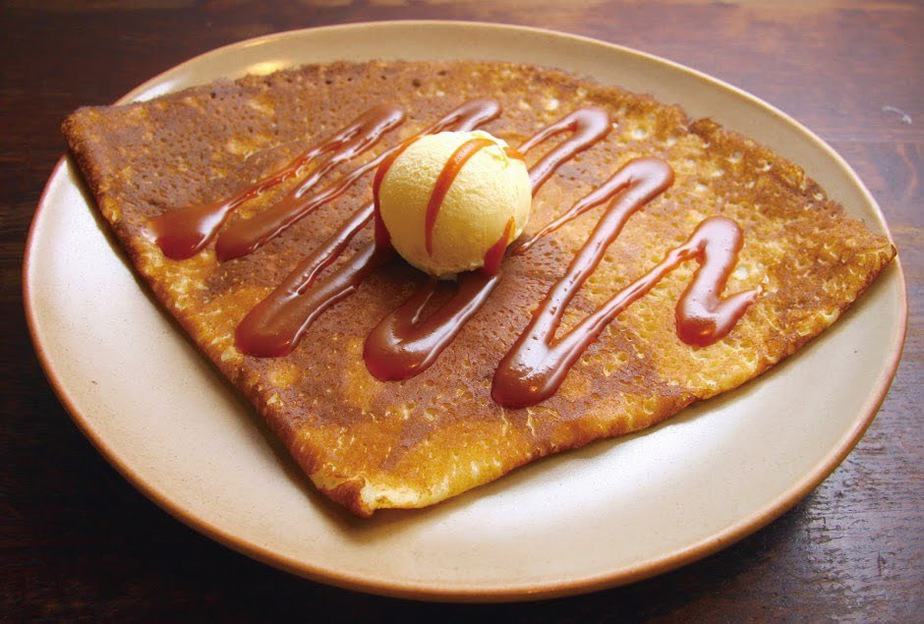 Their savory crêpes are well worth it. The chef’s have combined gourmet recipes to fill the inside of the crêpe sheets and plate them in an easy to eat square. I recommend any of the potato fillings! You’ll have to sit down for this one!

BONUS: A few more special creperies for you! 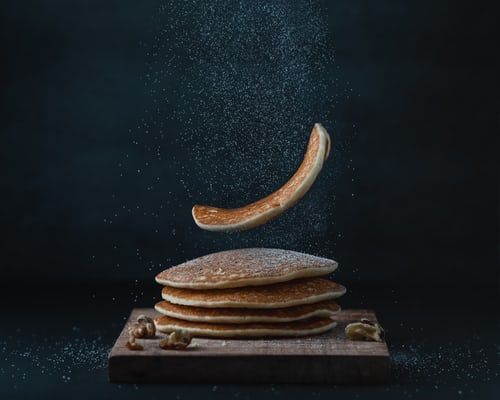 Are you desperately in need of a crêpe and can’t find a vegan place to eat one? Candelma has some of the best crêpes in Paris and with vegan/vegetarian options as well!

Located in Saint-Germain-des-Prés in the sixth arrondissement, this place has a lot to offer, with a wide variety of food, including main dishes and desserts.
With gluten-free crepes, organic buckwheat pancakes and tofu galettes you’ll be more than satisfied eating here.

The prices in this restaurant are very affordable as opposed to some of the other crêperies in Paris. For example, you can get a menu for only thirty euros! That includes a galette, a crêpe and a drink. It doens’t get cheaper than this.

The easiest way to get to Candelma is by getting on the metro line 10 and stop at the Mabillon station. From there just go in the north direction and you’ll immediatly see Candelma.

Candelma is opened from midday until 2pm and then from 7 pm to 11 pm everyday. 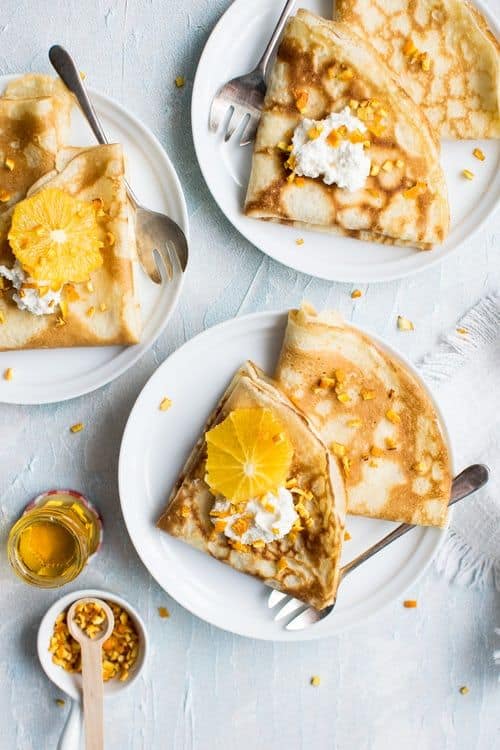 If you are specifically searching for a vegan crepe, Crepe de La Joie is the place to go. It is a small but cozy creperie shop with a lovely decoration and a modern touch to it. This place has one of the best crêpes in Paris, including VEGAN ones!

Located in the heart of the fifth arrondissement, this creperie is easily accessed via the metro line 7 and getting down at the Censier-Danbenton stop.

Here are some of their key ingredients for making vegan crepes:

And here are some of their customers prefered crepes: the sweet crepes filled with chocolate, coconut and bananas and the savoury one with vegetables, ham and vegan cheese! 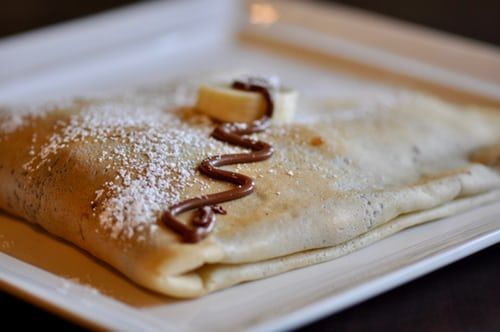 Crepe de La joie closes on sundays and on mondays and is open from tuesday to friday from midday until 3 pm and on saturdays until 5 pm.

If you decide to come to the fifth arrondissement, you can also go and visit the Saint-Étienne-du-Mont Chapel, which is really not that far from this creperie. 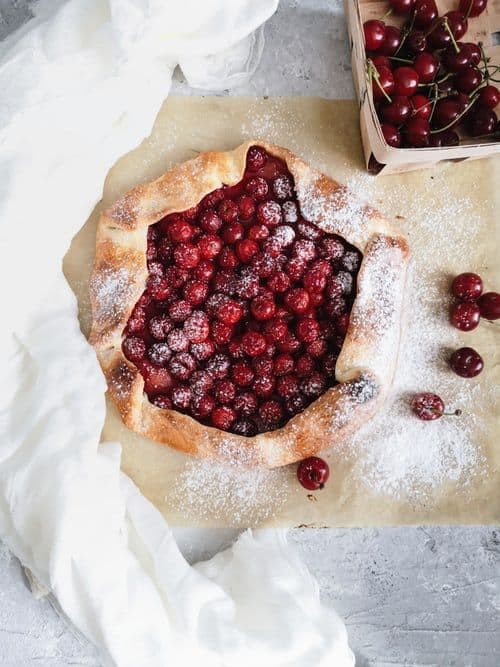 If you are on your way to the Eiffel Tower or to the Trocadéro and you are enjoying visiting the city, take a moment to relax and maybe get something to eat.

Located in the eighth arrondisement, the Crêperie Framboise is near everything you surely wish to visit while in Paris, like the Champs Elysées, the Grand Palais, the Jardin des Tuileries and, of course, the Eiffel Tower.

Taking the Frankin D. Roosevelt exit on metro line 1, this place is right around the corner with a beautiful sight and a lot to offer.

Typical French savoury and sweet crêpes is what you will find in this amazing creperie with a great variety of flavours to choose from.

As well as in the Candelma creperie, this restaurant has a menu offer that includes a crepe, a dessert and a drink for only thirty euros!

Very well located, suitable for vegetarians with gluten free crepes and vegan options, the best crepes in Paris will surely be found there.

If you’re crêpe crazy like the rest of Paris, at least one of the above should be on your list of destinations while visiting the city. Best crêpes in town — no doubt about that.