Things to do near the Marais 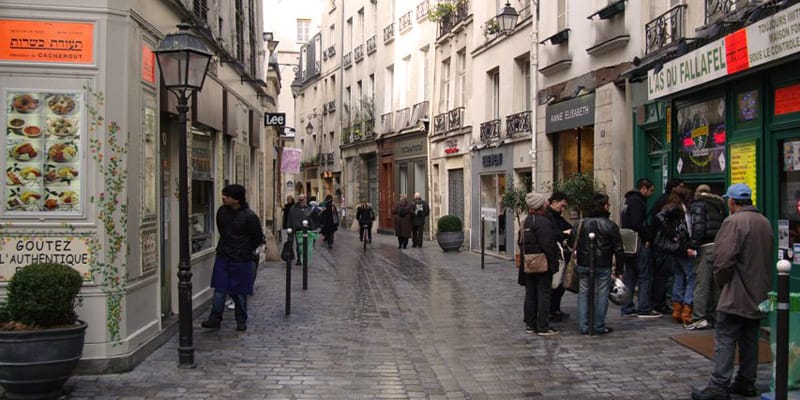 Things to do near the Marais

First developed during the Middle Ages, then a royal favourite under kings Henri IV and Louis XIII before falling into ruins after the French Revolution, the Marais district, literally the “swamp”, has gone through a revival in the second part of the twentieth century. A center of Parisian cultural life, the neighbourhood has turned into a trendsetting area, and has evolved from a working-class district to one of the most exclusive places in Paris. The Marais has a thousand faces: with its cobbled medieval streets alive with bars, restaurants, fashion boutiques, hip art galleries, the district is also the heart of Jewish Paris and is home to the largest gay community of the capital. Here are some of the things to do near the Marais. 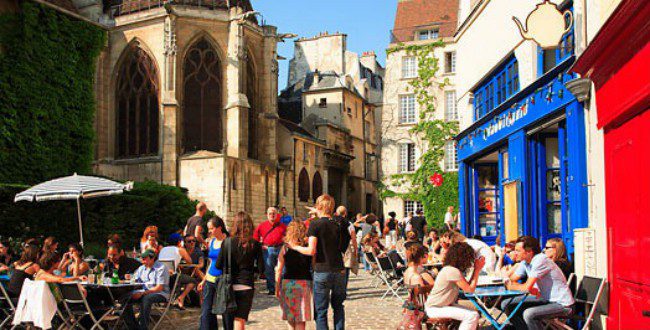 Also known as the Pletzl (“square” in Yiddish), the Marais has been home to large Jewish communities since the thirteenth century. Subject to periodical waves of antisemitism over French history, Jews acquired a stable status in French society under Napoléon Ist in the early nineteenth century.

To get a sense of authentic Jewish faith, first stroll along Rue Pavée where you’ll find Agoudas Hakehilos Synagogue designed by Art Nouveau architect Hector Guimard, the brain behind Paris’ iconic Metro stations. Dynamited by Nazis on Yom Kippur in 1941, the synagogue was restored according to its original shape: an open book inspired by the pattern of the Ten Commandments.

Then take the Rue des Rosiers (the Rosebush street) well-known for its delicious Yiddish delis and Eastern-European specialties, and enjoy the scent of sizzling shawarmas. Try the famous “falafel” (at l’As du falafel or Chez Marianne where there will be less queue) as well as tasty pastrami bagel (at Yiddish bakery Sacha Finkelsztajn), stuffed peppers, hummus, aubergine caviar, and tarama.

If you seek for a deeper insight of Jewish history and culture, head to the Jewish Museum located in Rue du Temple. Hosting a wooden model of a destroyed Eastern European synagogue, a large collection of Jewish masters’ pieces of art (Chagall, Boltanski), the museum traces the tempestuous history of French and European Jews while presenting Jewish faith and culture.

Having experienced Jewish art, you might want to visit the Memorial of the Holocaust. It opened in 2005, this compelling memorial and museum includes the deeply moving Wall of Names (tall plinths honoring the 76,000 French Jews deported from France to Nazi camps, of whom only 2,500 survived), and a permanent exhibition featuring the history of anti-Semitic persecution in the World and video testimony from Shoah survivors.

2.) Arty Marais: the heart of modern and contemporary art 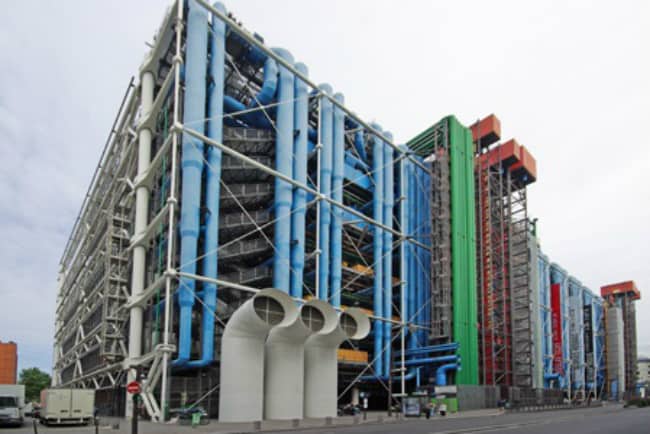 One of the best things to do near the Marais for art lovers is to visit the Beaubourg Museum for modern art. A multicultural complex, Beaubourg is in itself a piece of high-tech design signed by architects Richard Rogers and Renzo Piano. Considered as the “Loch Ness” of Paris by newspaper Le Figaro because of its exposed skeleton of brightly coloured tubes, the building hosts one of the major paintings of the late nineteenth-twentieth century namely pieces of Kandinsky, Warhol, Bacon, Munch, Dali, Miro, Matisse or Soulages.

For the first time in its history, Beaubourg features an exhibition on global art of the twentith century called Modernités Plurielles (1905 – 1970). With more than 1000 pieces from 47 different countries, its ambition is to make visitors reflect on the process of artistic globalization, which has become one of the major stakes of the twentieth first century.

To extend this artistic ambient, check the performances of street mimes and jugglers or sketch artists who are temporarily installed on Place Stravinsky in front of the museum, a place in which the “Fontaine des automates” featuring water-spraying sculptures by Tinguely and Nikki de Saint-Phalle pay tribute to the great Russian composer.

If you’re looking for a more alternative place, away from the touristic crowds, visit La Gaîté Lyrique, located on 3bis rue Papin, in northern Marais. It is one of Paris’s newest contemporary art venues that combines innovative exhibits with musical performances.

A temple to digital arts, the Gaîté Lyrique attracts waves of Parisian youth in search of a more interactive and more intimate approach to contemporary art than in Pompidou. It is free, but will cost between 5 to 7 euros for temporary exhibitions and concerts prices vary.

3.) Trendy Marais: from vintage “fripes” to the hippest designers of the capital 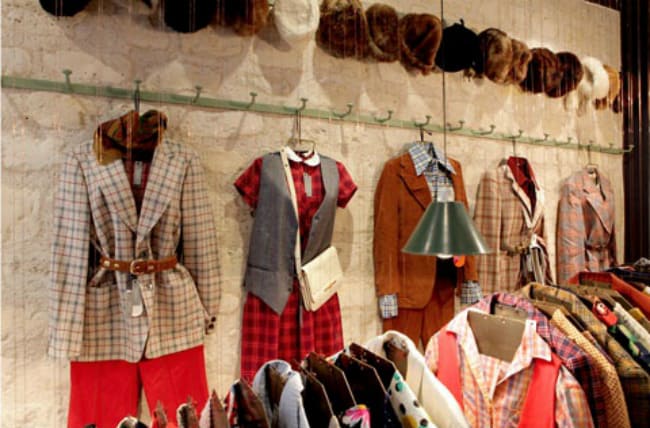 Being a fashion hotspot, the Marais will please all the fashionistas and fashionistos that visit Paris. The Marais district is a mecca of secondhand stores from chaotic, bazaar-style Coiffeur Vintage and Free’p’star to the designerwear at Kiliwatch.

Dive into the mountain of vintage clothes in search of the perfect 50’s dress and bargain (not in all shops) to lower the price of vintage Converse shoes. Hunting the fripes is ideal, whether you’re a vintage addict or if you only want to get a glimpse of old-fashioned Parisian style.

A thing to do in the Marais for fashion lovers is to go to Hippy Market just for the sake of the owner’s incredible style (military hat, marinière and an amazing moustache). Also, take Rue des Francs-Bourgeois, once a street where artisan weavers worked and still a centre of fashion and design.

Apart from the fashion and jewelry shops, take some time to admire the historic, Renaissance-era buildings. Finally, have a rest at the “bobo” Village Saint Paul where you’ll find plenty of traditional bars, bistros and sandwich shops but also artisan boutiques selling unique home decorations. 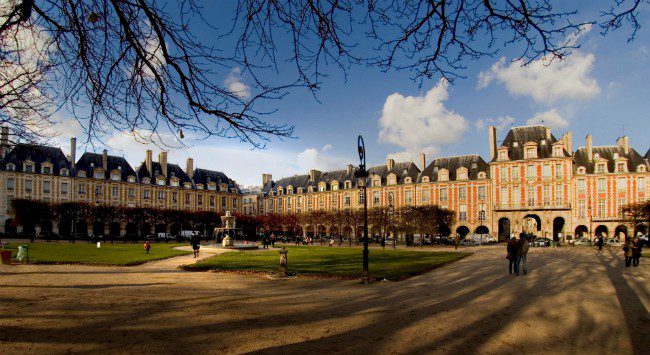 The oldest square in Paris and probably the most beautiful is the Vosges square. It embodies the spirit of historical noble Marais. Surrounded by ancient bourgeois mansions, Vosges Square is located off Rue des Francs-Bourgeois, near Rue de Turenne.

A glance at some pre-revolutionary buildings indicating the wealthy status of former residents will help you get the feeling of pre-Haussmanian architecture. Spared by the massive destruction plan of Napoléon III, the Marais district and especially the Vosges square revive the small and approachable Paris of the past. The best thing about Vosges Square is probably the leafy garden lined with chestnut trees, a former dueling ground and today an ideal place for picnic and for kids to have fun, because of the play area.

Aside from hanging out in the park, you might want to visit the museum dedicated to Victor Hugo, the author of Les Misérables and the Hunchback of Notre-Dame, who once lived in Vosges Square. At the base of the redbrick-and-stone houses, visitors will find an arcaded walkway lined with art galleries and cafés.

5.) Kids’ Marais: enjoying the Marais district when you are under 10 to 12 years old 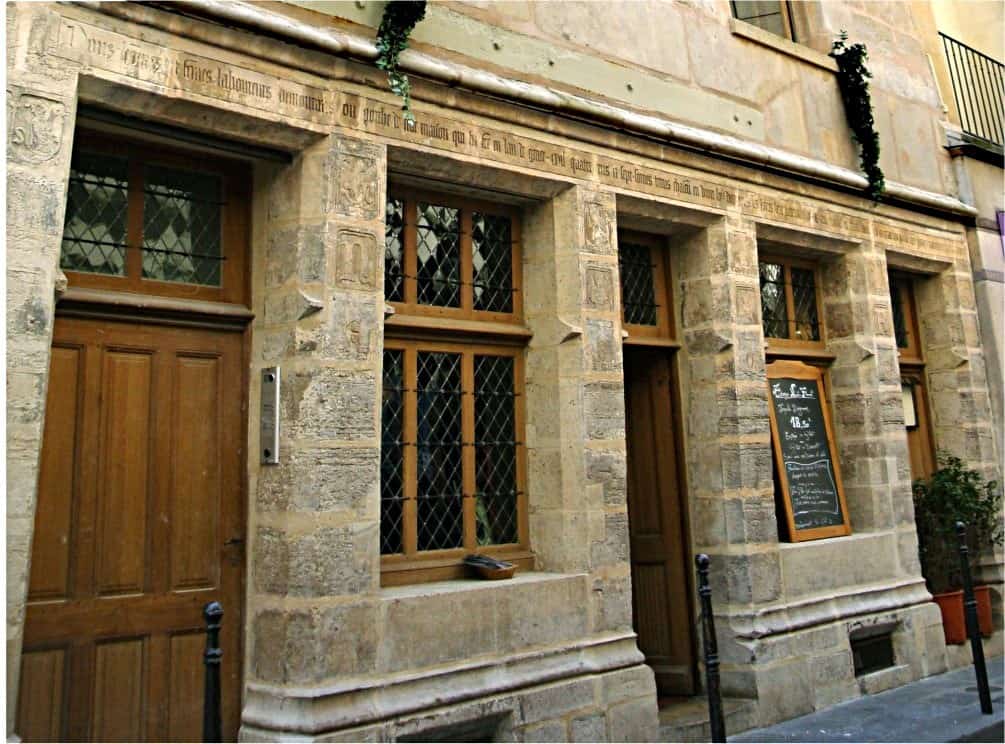 There are plenty of things to do near the Marais for families with kids. The first one is most certainly the Musée de la Chasse et de la Nature, the “museum of hunting and nature“. Located in the Hôtel Guénégaud, at 62 rue des Archives, the entrance costs 8 euros for adults and it’s free for children. Featuring an impressive menagerie of beasts, not to mention the huge polar bear stationed outside, the museum is a good experience for kids interested in nature!

Then, there’s also the Nicolas Flamel’s home. Located at 51 rue Montmorency, this place will please Harry Potter fans: reputed to be the oldest house in Paris, it was the real-life residence of Flamel, the alchemist that’s said to have discovered the source of immortality.

You now know some of the things to do near the Marais! The Marais is a great neighborhood, there’s activities and places to visit for people from all ages and interests! I’m sure you will love this lovely area. If you want to visit in the company of a Parisian friend, join our Marais walking tour that happens at 2.30 pm every day! Don’t hesitate to contact us if you need further information about anything! See you soon in Paris!