The Top 5 Airports in Thailand 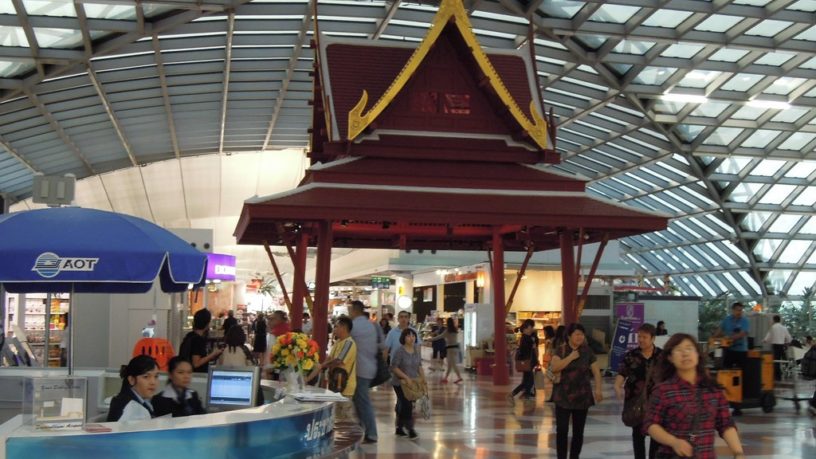 The Top Five Airports in Thailand

The majority of travellers to Thailand probably associate any mention of the country’s airports with the main international one near Bangkok, Suvarnabhumi International Airport.

For those slightly older and more seasoned travellers to the SE Asian nation, the somewhat smaller Don Mueang Airport, the former main international airport before the newer one was built, may feature in there too. 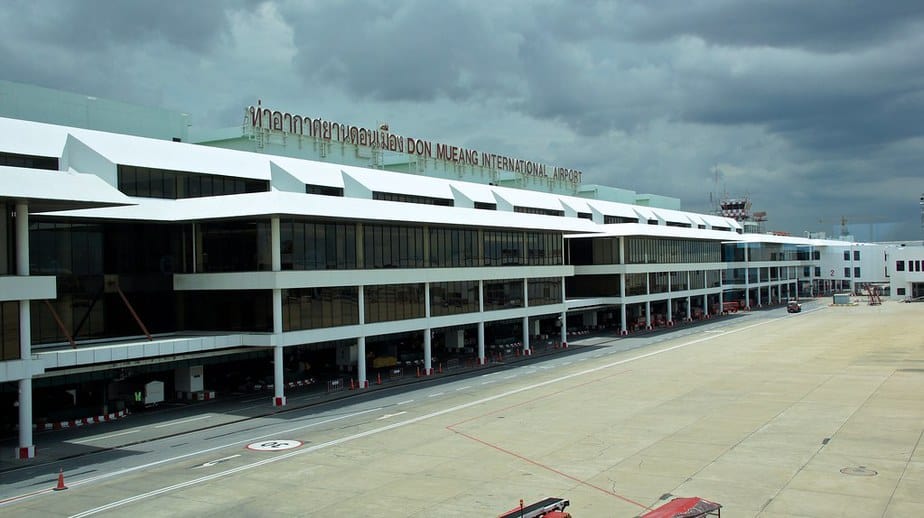 Image by rusamesame from creativecommons.org

Yet you might be surprised to find out though that Thailand has a total of 38 airports in all, with seven of them actually classified as international ones. From central Bangkok up to the North and back down to the South there are 5 or 6 main ones in the country from that number.

You can actually go right up to the far North, deep into the South and easily reach the majority of man north-eastern regions these days by domestic flights, as well as just about anywhere in between in Thailand .

The country’s main carrier, Thai Airways, services almost 70 cities in just under 40 countries on an international basis from Suvarnabhumi International Airport, while domestic services are covered by both Thai Airways and more commonly, a host of low-cost, smaller airlines with varying degrees of quality and repute.

Here we are going to look at the top 5 airports in Thailand, although of course, there are many more that service domestic travel to the various regions of the country. 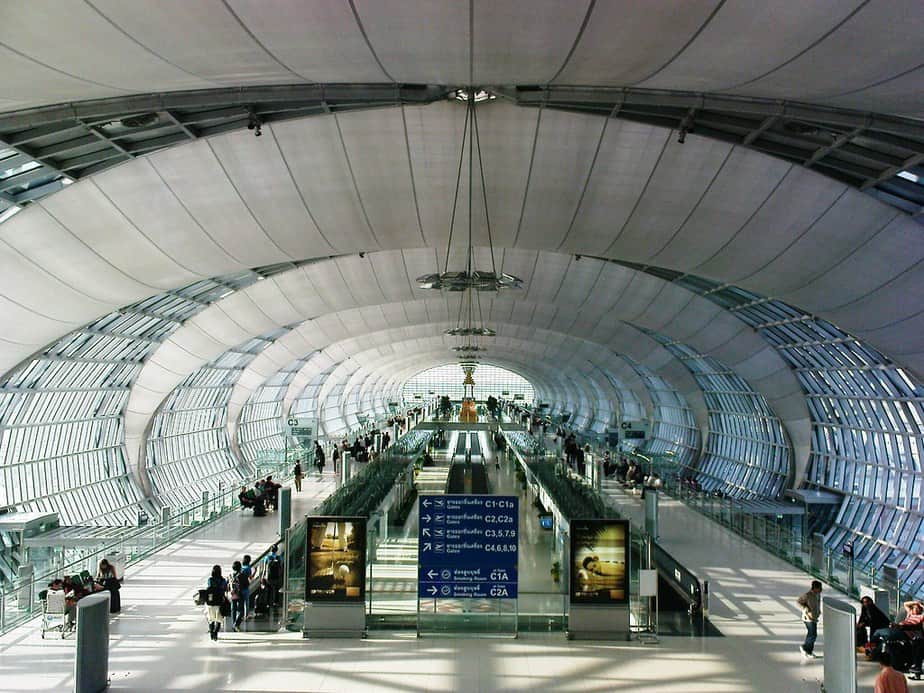 Image by olivern5 from creativecommons.org

As many as 60 million passengers reportedly pass through Suvarnabhumi Airport every year. The airport is in the Bang Phli district of Samut Prakan province, about 26 km southeast of the main city centre areas of Bangkok. It is not too difficult to reach any Bangkok destination via either the Airport Link or taxi/car, depending on the time of day (make sure to install the Grab app beforehand to avoid potential taxi scams).

All the departures at the airport go through airline check-in counters on the 4th floor, and arrival a couple of hours prior to the flight is always a good idea. 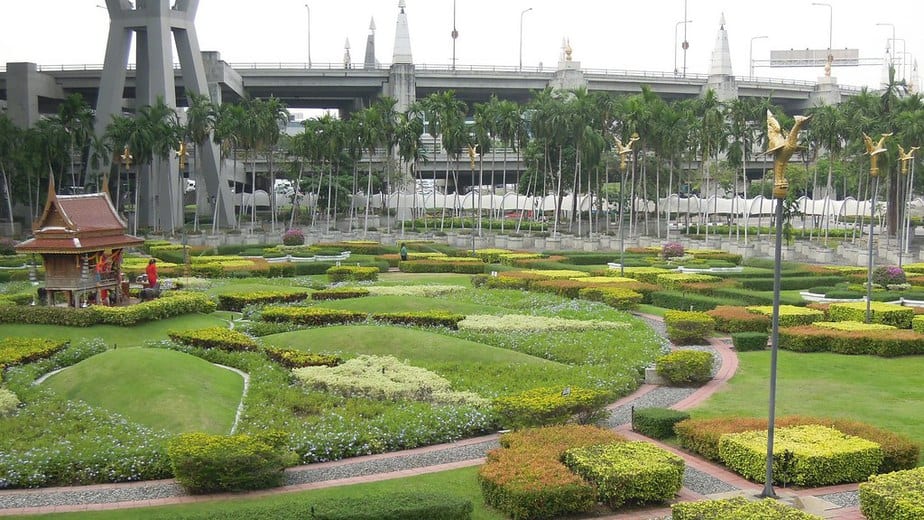 Because of the sheer size of the airport, there is a bit of a walk to find baggage and also to reach immigration, before even considering exiting the building. There are plenty of restaurants though, as well as phone shops with SIM cards duty free shops etc., and of course ATMs outside the arrivals hall.

It can sometimes be congested and chaotic but with a little careful organising and a dash of patience you should be able to pass through this airport either way with relative ease.

Don Mueang Airport was the original international airport that many long-term travellers to Thailand and Bangkok have fond memories of.

It was initially closed for international flights once the much bigger, newer Suvarnabhumi was completed. However, it reopened in October 2012 to take the pressure off the newer construct which was still finding its feet.

Don Mueang has since become the main hub for internal domestic flights, as well as budget flights including AirAsia and Nok Air. This airport actually opened in 1914), but thanks to various renovations and lower volumes of air traffic, it is one of the most trouble-free travel hubs there is. 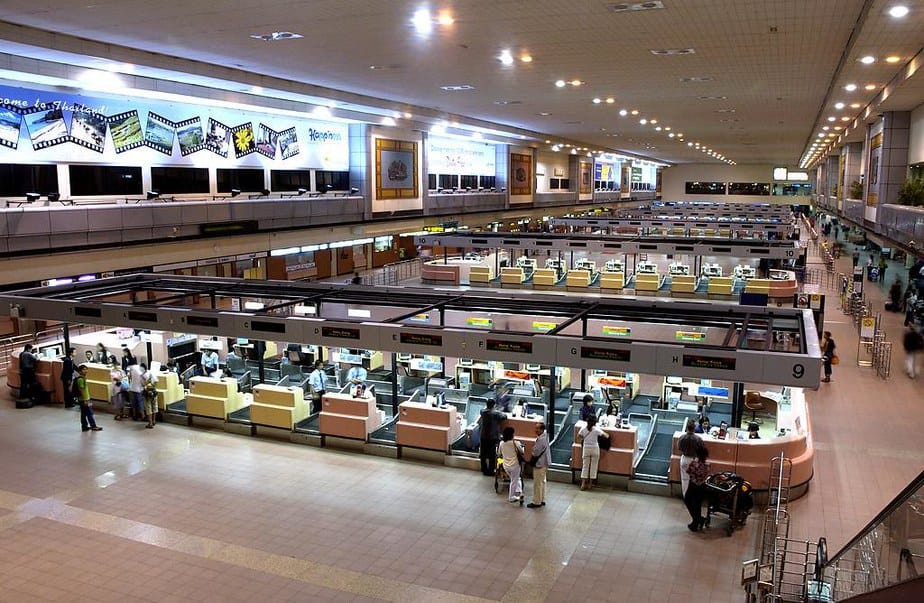 Image by Boonkumnoun from creativecommons.org

And this was the case even when it was the main international airport, as anyone who has found it a challenge locating their baggage at the cavernous Suvarnabhumi will testify to.

Don Mueang is follows a simple layout with just 2 levels, with the Departure Hall for domestic flights on the 2nd floor. All of the airlines operate their check-in counters on this floor, while arrivals and international flights are dealt with on the first floor.

There are still a fair few restaurants, fast food outlets and snack bars, as well as banks and money exchange counters. 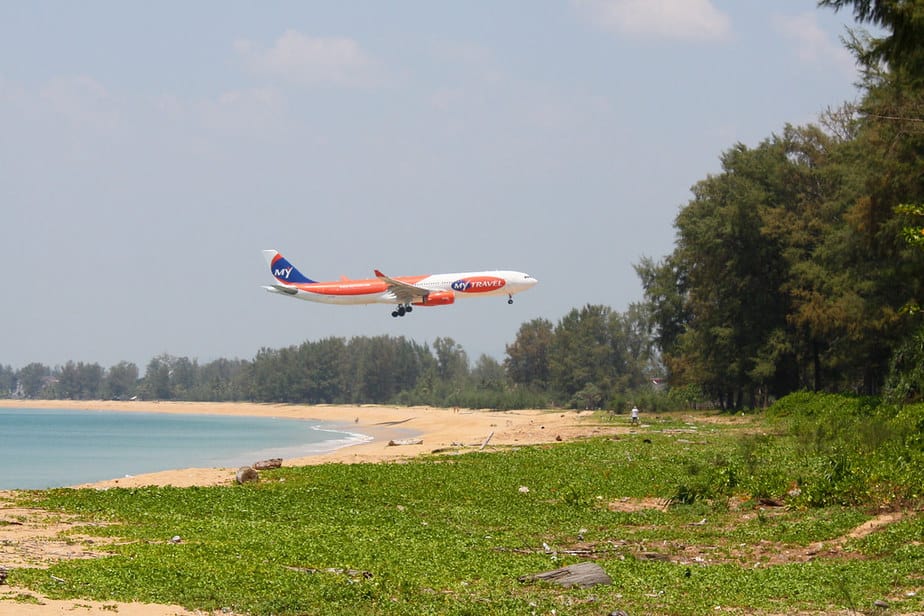 Image by Andy Mitchell from creativecommons.org

Phuket International Airport is one of the country’s many southern air terminals, and is actually the second busiest airport in Thailand.

The island destination of Phuket sees millions of passengers annually pass through its air terminal. Many of them choose to fly directly to the top beach destination rather than transferring from Bangkok.

Phuket International Airport is the main hub for tourists in the southern part of Thailand, although there are others in the region like Surat Thani and Hat Yai (which is covered later in this post). The airport receives large numbers of passengers (around 16 million) from all over the world, and thus is an integral feature of the country when it comes to promoting travel and tourism.

The airport has many domestic and international airlines on service and more than 16 million passengers per year fly via Phuket airport. On arrival you first have to pass through one of the 15 immigration counters, which isn’t many by international airport standards, thus the airport does have something of a reputation for long queues.

The 5 baggage carousels are reasonably easy to navigate, then after passing the 8 Customs counters into the Arrivals Hall there are all the usual services such as money exchanges, ATMs and local SIM cards.

The southern Thai airport also has something of an impressive location in that it is just behind Mai Khao Beach. The northbound flights from the airport also pass over the scenic Phang Nga Bay, allowing some unique views of the stunning coastal landscape.

Image by Qsimple from creativecommons.org

Chiang Mai is largely considered as the capital of the northern region of Thailand. The airport is thus a major gateway to the region, which has become a more and more popular Thailand tourist destination over the last decade or so.

The international airport in Chiang Mai receives more than 2 million visitors every year, with over 100 flights a week coming in from Bangkok, as well as other Asian regions such as Singapore, China, Taiwan, Myanmar and Laos. It is the third busiest air terminal in Thailand after Bangkok and Phuket

The airport is located 3 km southwest and less than a 10-minute drive from the city center, and comprises both domestic and international terminals in the same building. All the usual facilities like exchange counters and ATMs are available to visitors, and you will find food a food court with various outlets, and a fast food outlet, along with shops selling Northern Thai-style items like silk, handicrafts, food, snacks, and souvenirs. 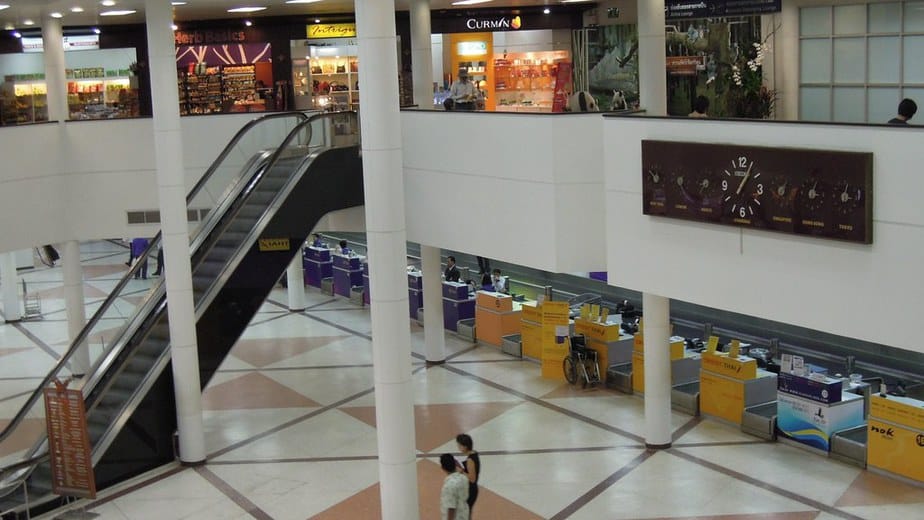 There are travel agent offices at the airport and customer service desks for various airlines local to the region such as Thai Airways, Singapore Airlines, Bangkok Airways, AirAsia, Nok Air, and a couple of others. There are several exchange bureaus and ATMs in the terminal as well.

If you were thinking of heading even further north than Chiang Mai in Thailand and up towards the neighbouring Myannmar border, you might find it useful to know that there is also an airport in Chiang Rai by way of Mae Fah Luang. This is also considered an international airport further north, and is relatively hassle-free and not overly-busy.

In Thailand’s southern regions on the Gulf Coast is Thailand’s fourth largest city, Hat Yai. This is another popular southern tourist destination both domestically and internationally, and it is a focal point in Thailand for Malaysian and Singaporean visitors. 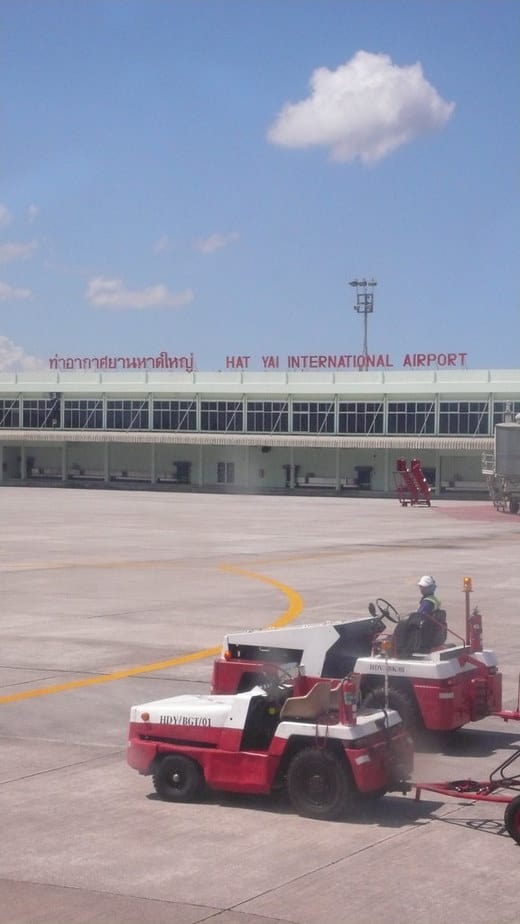 Image by Leket from creativecommons.org

Hat Yai International Airport receives more than 800,000 passengers per year, and is a hub for almost 10,000. Aside from the beach destination regions in Southern Thailand, this airport is the main international gateway into the country from its southern borders.

The Hat Yai airport comes under the jurisdiction of the Airports of Thailand Public company Limited (AOT), which has had extension plans in the pipeline for a while. The plan is to develop the airport to have the capacity to accommodate up to 10 million by the year 2030.

The airport’s operates two main terminals, and the process of passing through is efficiently managed in order to be hassle-free.

The airport has several major Airlines operating from the premises on a regular basis, as well as local and budget airlines for domestic travel. These are namely the likes of Thai Lion Air, Nok Air, Air Asia, Thai Smile, and Tiger Air, as well as Bangkok Airways and Thai Airways.

Flights run to and from Bangkok’s Suvarnabhumi Airport on a daily basis via Thai Airways, and there are other flights to Bangkok’s Don Mueang Airport by some of the smaller airlines. There are even twice weekly flights to Pattaya from Hat Yai, as well as daily flights to Singapore via Tiger Airways. The airport can currently accommodate 30 flights per hour, but there are ongoing plans to increase that capacity.

So whichever region of Thailand you plan on visiting or travelling to from another area, you shouldn’t find it too difficult to find a either a local or international flight that takes away the hassle of long road trips.