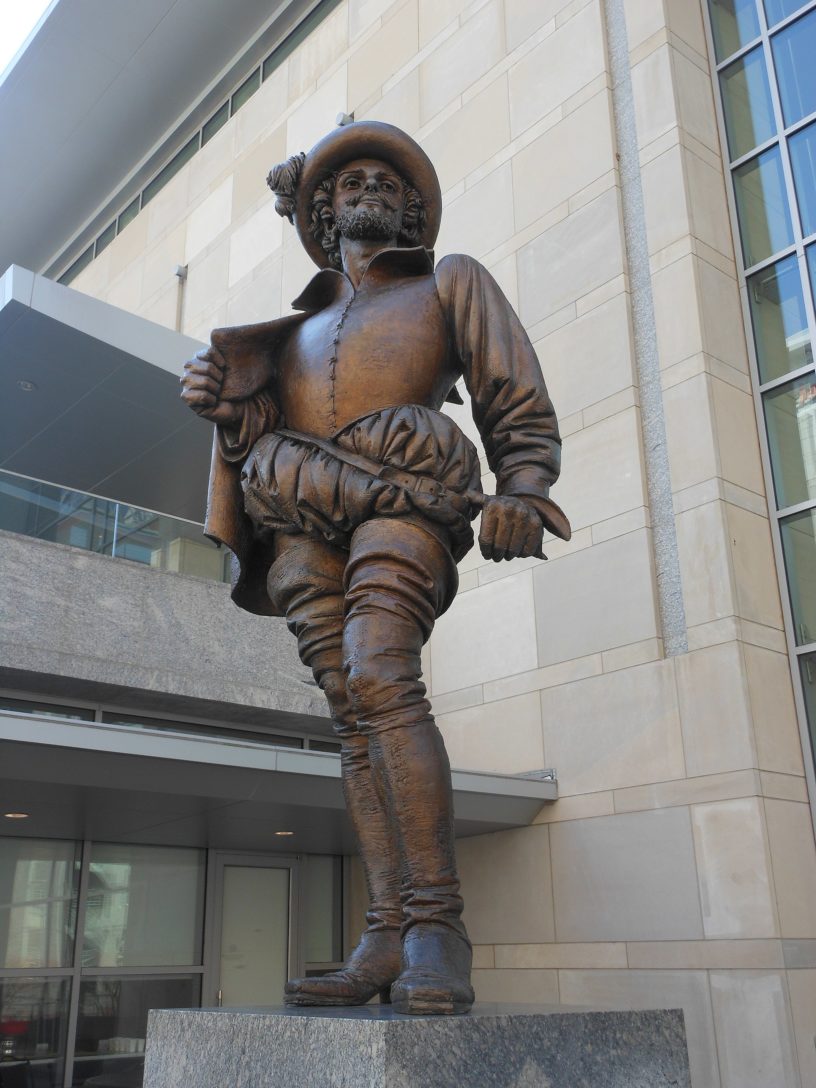 Sir Walter Raleigh wears the title adventurer quite well. He traversed many lands on behalf of his. He was also a soldier and writer, though his escapades may be said to have overshadowed his writing.

Sir Walter Raleigh was born to Catherine Champermowne and Walter Raleigh in 1552 or 1554, as historians deduce. He spent his early years in Budleigh Salterton, Devon, England. Sir Raleigh was born into a well- connected gentry’s family. Sir Richard Grenville and Sir Humphry Gilbert, prominent during the reigns of Elizabeth I and James I were his relatives.

By the time of his death, Sir Raleigh had been credited with conquering lands. He was also close to the monarchy, serving the queen, but all this changed in his latter years. His may be described as a story of grace to grass somewhat- here are some top 10 facts about Sir Walter Raleigh.

1. He founded a colony named Virginia 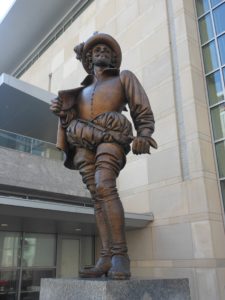 Sir Raleigh founded a colony near Roanoke Island between 1584 and 1589. This area is present-day North Carolina. He named this colony Virginia.

Sir Raleigh selected the name in honor of the queen who was known as ‘the Virgin Queen’ as she did not let matters of the heart get in the way of the throne.

Sir Raleigh’s exploration of this colony paved the way for future English settlements.

2. Sir Walter Raleigh was captain of the Queens guard 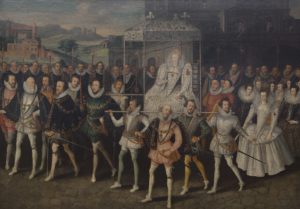 Sir Raleigh was knighted and thereafter appointed captain of the Queen’s guard in 1587. These honors came about after he voyaged to Munster to help suppress an appraising, capturing the attention of Queen Elizabeth.

A captain of the Queen’s guard is charged with palace and sovereign places’ protection.

It was no secret that Sir Walter Raleigh was the Queen’s favorite, especially after his Munster expedition. He rose through the ranks very quickly- he became a member of parliament in 1584, receiving extensive estates in Ireland.

Furthermore, in 1583, Queen Elizabeth I secured him a lease of part of Durham House in the Strand, London. Here he had a monopoly of wine licenses and of the export of broadcloth.

Raleigh acquired the manor of Sherborne in Dorset in 1592.

Suffices to say that Sir Raleigh was doing well for himself.

4. Sir Walter Raleigh is said to have had an affair with the Queen 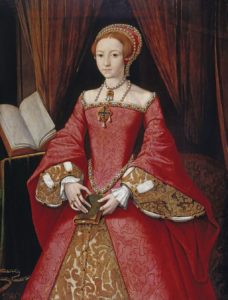 It is said that Sir Walter Raleigh forfeited Queen Elizabeth’s favor when he secretly courted and married another woman- one of her maids of honor. When the queen learned of this, she was furious, throwing Raleigh and his family into prison.

Other quarters believe that Queen Elizabeth I orchestrated a relationship between Sir Raleigh and her maid of honor so she could have him close, and enjoy an affair by proxy.

Legend has it that the flashy Raleigh once spread his expensive cloak over a puddle for the Queen!

5. Sir Walter Raleigh features in a movie about Queen Elizabeth I

More than two movies depicting the life and story of Queen Elizabeth I have been released. The 1998 film ‘Elizabeth’ and the 2007 “Elizabeth: The Golden Age” both bring history to life, as expected, with alterations to actual events as do most movies.

As he was a part of Queen Elizabeth’ life, Sir Raleigh features in these movies. Elizabeth: The Golden Age gives a lot of airtime to the supposed affair between Queen Elizabeth I and Sir Walter Raleigh.

Vincent Price brings Sir Walter Raleigh’s character to life in the 1939 film “The Private Lives of Elizabeth and Essex, while Richard Todd does the same in the 1955 “The Virgin Queen”.

Sir Raleigh was raised in a Protestant family. This did not work in their favor at the time- the reigning Queen Mary I was a devout Catholic and persecuted Raleigh’s family and others, on grounds of religion.

In his book “Five English Reformers”, J.C. Ryle records that Queen Mary I was called “Bloody Mary”! Her last four years at the throne resulted in at least 288 deaths by burning at the stake on account of Protestantism.

Raleigh’s father would have been killed for his faith had he not hidden in a church tower. From a young age, therefore, Raleigh developed a deep-seated lifelong hatred for Roman Catholicism. At age 17, this hatred pushed Raleigh to travel to France to fight the Wars of religion. 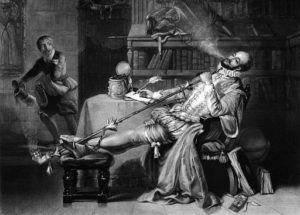 The potato was first introduced to Ireland in 1589 by Sir Walter Raleigh. Raleigh encountered it during his expedition to the Americas and he planted them in his Irish estate at Myrtle.

It is said that Raleigh brought a potato as a gift to the Queen.

He also brought back with him tobacco during this same expedition- Sir Walter Raleigh had traveled to Guiana searching for the land of gold, El Dorado. While he didn’t bring any old, he came back with the two items.

The potato is now one of the staples in Ireland.

Sir Walter Raleigh was also a great writer- he was a proud romantic poet good with rhymes. Some of his works include “The Oceans Love to Cynthia”, ‘Nature, That Washed Her Hands in Milk”, “Farewell” and “False Love “.

The narrative of Raleigh having an affair with Queen Elizabeth I carries on- it was believed that the character addressed as Cynthia in his poems was a pseudonym for the queen. 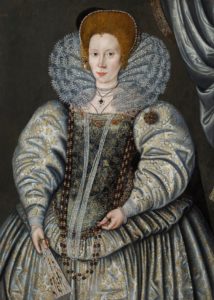 When Sir Walter Raleigh married one of the Queen’s maids of honor, Elizabeth Throckmorton, it was without permission as this was forbidden. It is said that this was found out with the birth of the illegitimate couple’s first child.

Sir Raleigh and wife were imprisoned in the Tower of London in June 1592. He was only released from prison in August 1592 to take charge of a recently returned expedition and attack on the Spanish coast.

His second-time imprisonment lasted longer- 13 years. He was charged with treason as he invaded and plundered Spanish territory at a time when James I was seeking peace with Spain. He had claimed he would bring back gold but came back empty-handed.

His time spent in prison yielded some of his writing, such as the acclaimed “The Historie of the World”. He also studied chemistry and history during this time. His stay in prison was made rather comfortable. He had enough room and a desk at which he could write. 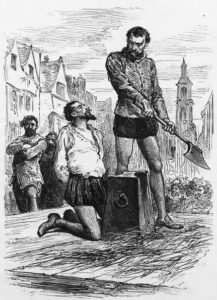 Sir Walter Raleigh was accused of inciting a war between Spain and England deliberately. This caused an earlier reduced death penalty to be invoked. He was imprisoned for a few months before getting beheaded outside the Westminster palace.
His head was embalmed and given to his widow who kept it to her death.

Sir Walter Raleigh was a celebrated and achieved soldier, a hero on land and sea. He is credited with the first-ever English colonies in the New World. His poetry is categorized with some of the finest in early modern England.

Raleigh can be said to have had a love-hate relationship with the monarchy.