Paris - Activities & things to do, Paris - Attractions & museums - what to see, Paris - Neighborhoods and where to stay 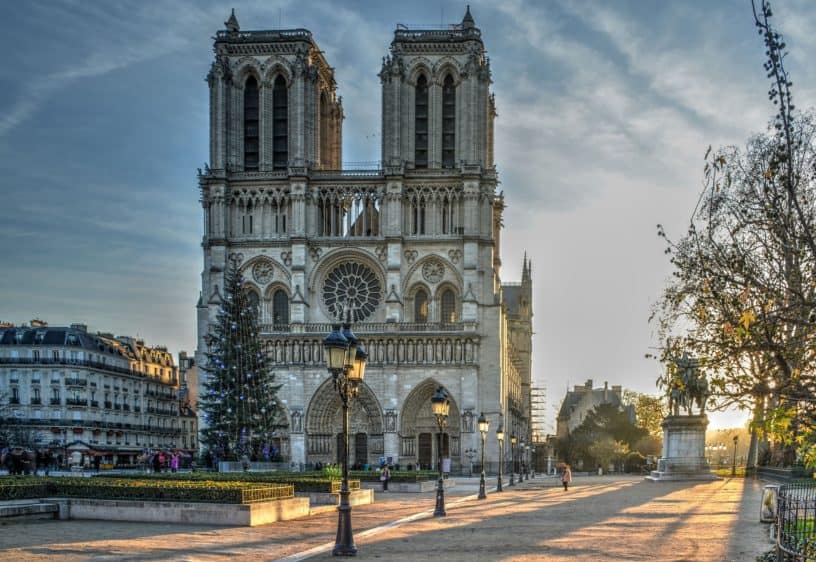 Notre-Dame was built on a location dedicated to religions since the Roman Ages - Source : Pixabay.com CC0

5 Things to see in Saint Michel

Saint Michel is one of the most touristy neighborhoods of Paris. However, interestingly enough, the hundreds of tourists roaming every day through the streets does not impede hundreds of French students and lovers of art and literature to wander through the famous Parisian 5th and 6th arrondissements.

The Saint Michel neighborhood is one of Paris’ area that I go to the most often. There is something quintessentially French about the streets oozing culture and history, even though it can be perceived as museumified by some.

In this article, I will guide you through the neighborhood and its most iconic spots and things to see. I have also included less famous things (#3 and #5 particularly) to let you experience the neighborhood outside of its must-see attractions.

1. The Place Saint Michel and its surroundings 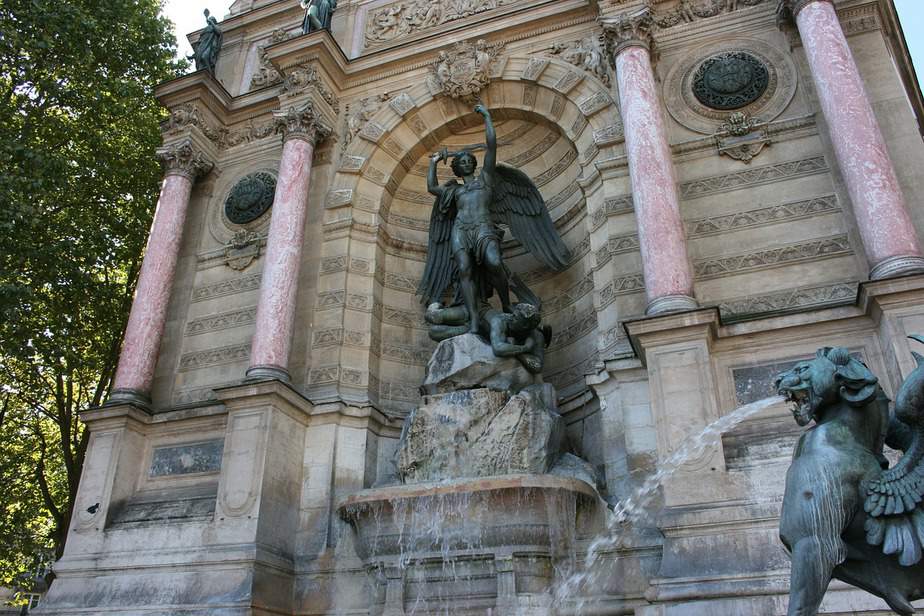 The Place Saint Michel and its famous fountain are a neuralgic spot of Parisian life and a famous meeting point. Very often, artists and bands settle on the square and entertain the crowd gathered there. In spring, it is not rare to see people dancing!

However, I would recommend you are careful: the place is known for its organized groups of beggars who come to scam tourists by making them sign a sheet containing a gift promise. Beware and do not sign anything you have not read carefully!

Saint Michel is also famous for its crowded Seine banks as soon as the first spring rays of sun come out. The banks are a well-known spot for French students who come and gather to listen to music, look at the sunset and drink wine. 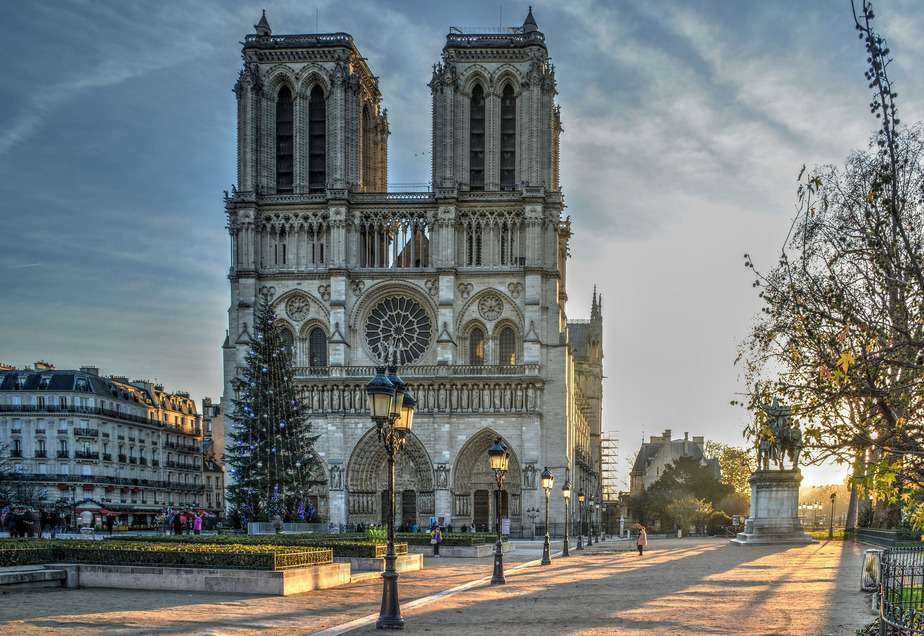 Notre-Dame was built on a location dedicated to religions since the Roman Ages – Source : Pixabay.com CC0

While you are on the place Saint Michel, you can have a look at the infamous Notre Dame cathedral. This cathedral is one of the main reasons the Saint Michel neighborhood is so touristy. It inspired Victor Hugo (one of the most famous French writers) to write his cult Notre Dame de Paris novel in 1831.

You have two choices to discover the cathedral: either you sit on its parvis and enjoy its majestuous view from outside, or enter inside. I think it is absolutely a must-see but be prepared to queue to enter if you do not come early.

The entrance to the cathedral is free but you will have to pay 8.50€ if you want to access the tower and enjoy its insane view.

3. The Shakespeare and Company bookshop and library 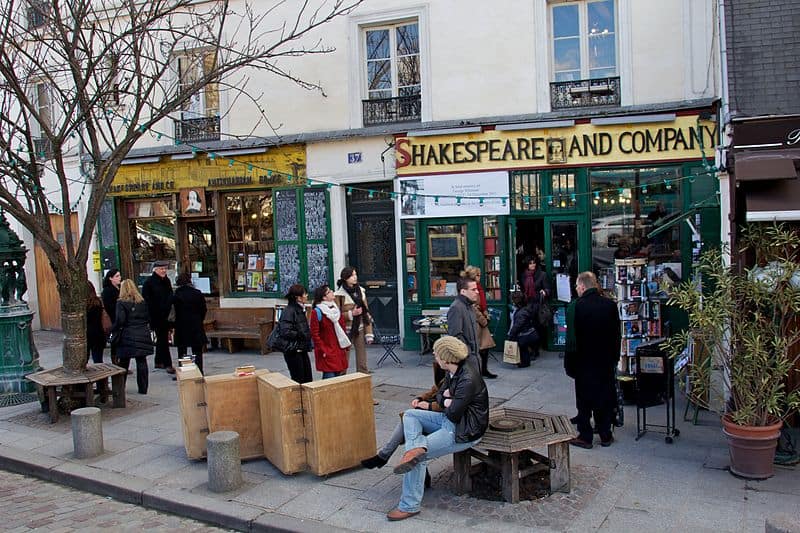 This one is a less famous but nonetheless still cult spot in the Saint Michel neighborhood. Shakespeare and Company is one of the most iconic independent libraries in Paris.

Nestled on a charming square at walking distance from Notre Dame, the library is covered in book shelves from floor to ceiling. It displays one of Paris’ biggest selection of English-speaking books. What I love about this bookshop is that they carefully select every edition they sell to make sure they are the most beautiful and relevant on the market. 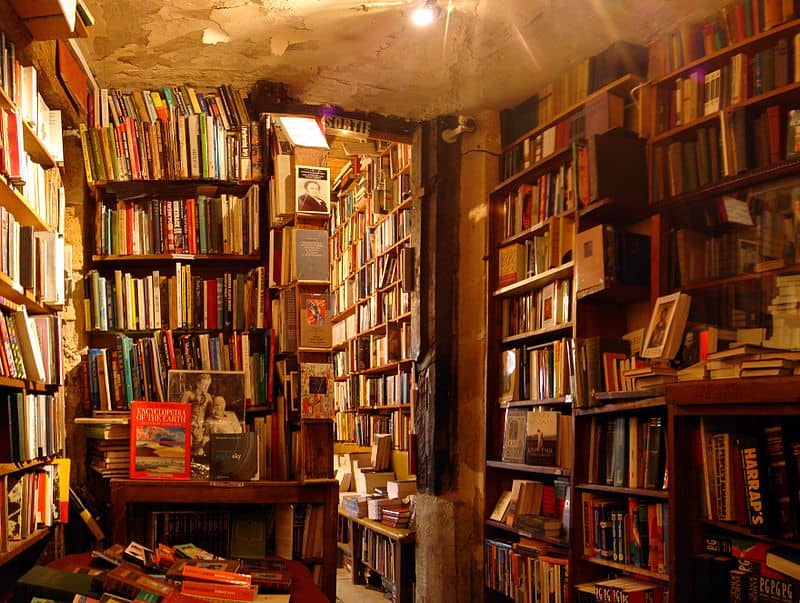 To my mind, Shakespeare and Company is the best place if you want to buy an original gift from Paris: they have original books, obviously, but also notebooks and their famous totebags that you will often see carried by Parisian hipsters.

At the top floor of the bookshop, you will find a library where book lovers and students come to work or borrow and read English books. If you come here during busy hours on the weekends, it might not be much of a study atmosphere, so I recommend you come during weekdays if you are looking for a cozy yet studious atmosphere.

Shakespeare and Company is one of my favorite independent bookshops in Paris, I have written a full article about the library, you can check it out here.

The Saint Michel neighborhood is also famous for its Gibert Joseph stores – they are a famous chain of giant bookshops which exist in several areas of France. 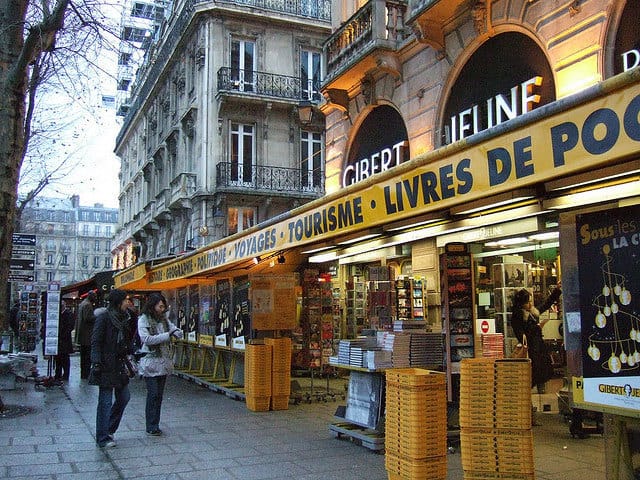 They do not have the charm of old independent bookshops such as Shakespeare and Co but they come in extremely handy when you are looking for a specific book (they can order almost everything) or just buy a French book. 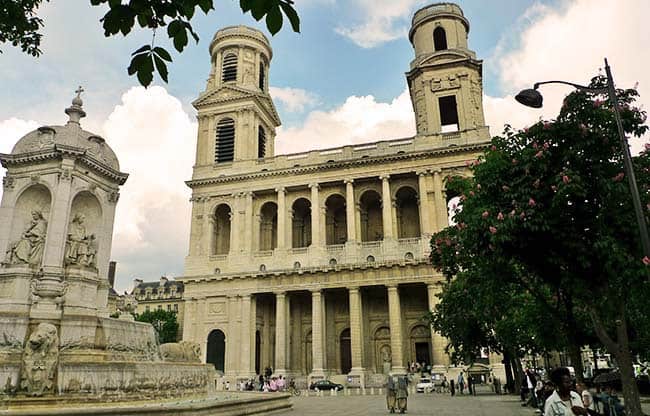 Walking distance from Saint Michel is also the majestic Saint Sulpice church. This church is amongst the favorite of many Parisians who live on the left bank. It is surrounded by a vast square where families gather to have a picnic or take their children to play as soon as it is sunny in Paris.

When leaving the square, take the rue des Cannettes : this tiny street is famous amongst Parisian students for its lively bars and food spots. Chez Georges is my favorite bar of the street. Desert during day time, it turns into a friendly and intellectual hub during nighttime. Their playlists are beautifully curated and even though regulars hear them almost every evening, they still dance when they hear their favorite!

The last stop I will suggest while you are in Saint Michel is less usual. I can guarantee than only Parisians know it – it is the iconic independent Christine 21 Cinema, one of my favorite in Paris.

The Christine 21 is a tiny cinema (there are only two rooms!) and is very representative of the many independent cinemas that you can find in Paris.

The cinema was open in 1973 and features every day a curated and specific selection of old American restored movies. If you are looking for a very Parisian experience while here, I suggest you attend one of their movie-club session or simply that you watch a film there.

These tiny independent cinemas with carefully curated selections are a part of what makes Paris a famous cultural capital of the world.

It is now time to wrap up this article – if you are looking to explore the neighborhoods of Paris through the eyes of the Parisians who live there, some locals are giving free tours to make you discover the hidden gems of their neighborhoods. If you want some more information, head over there!