Paris - Food & restaurants, Paris - Neighborhoods and where to stay, Paris - Our top 10 lists 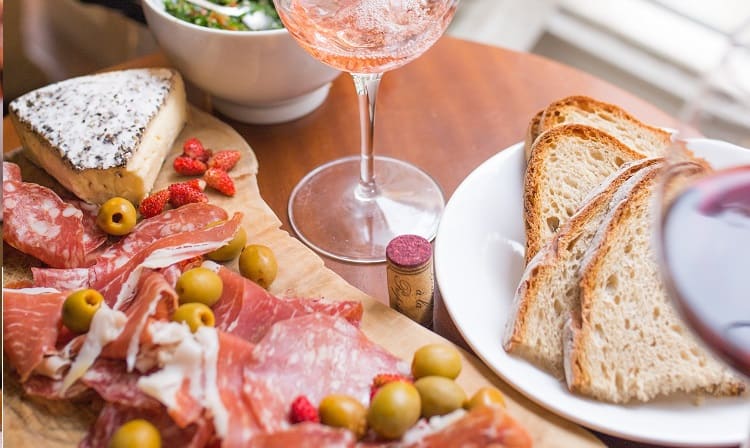 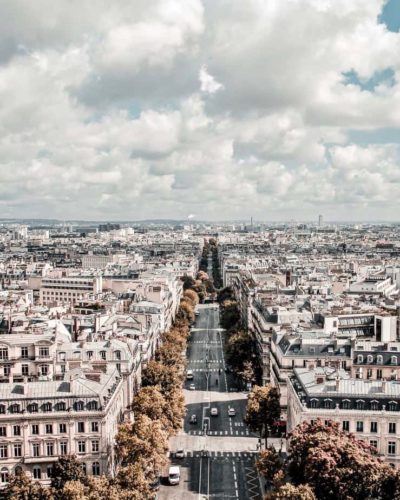 Perhaps one of the most romantic and historic neighborhoods of Paris is Saint-Germain des Près, located in the literary-significant 6th arrondissement. Home to the oldest church in Paris (Eglise de Saint-Germain des Près) and cafes that artists and writers have been flocking to for decades, Saint-Germain should definitely be at the top of the list of anyone visiting Paris.

In this harbor of literary brilliance lies a goldmine of excellent restaurants and historic cafes, all bringing their own Parisian element to the table. In this article, we’ll explore all of the must-see restaurants in the Saint-Germain neighborhood. 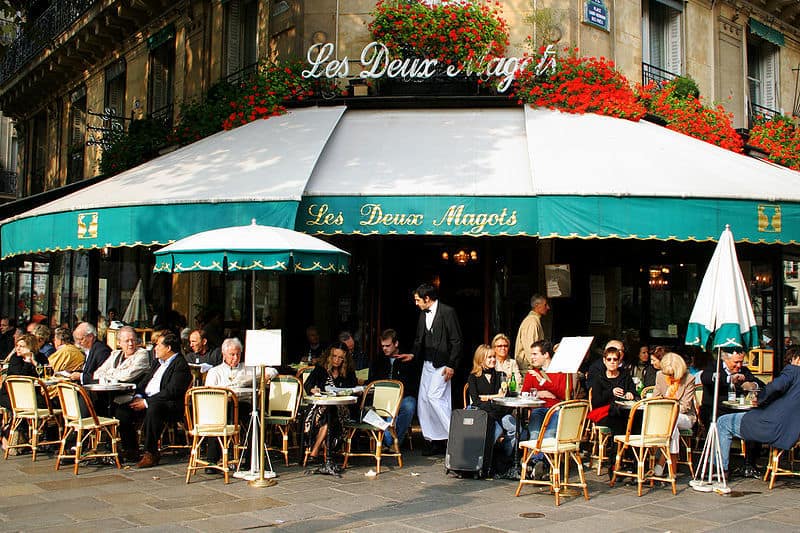 Artists such as Pablo Picasso, Earnest Hemingway, Jean Giradoux, Louis Argon, and more have made the cafe a go-to spot for writing, debates, and a merry ol’ time. Even to this day, artists are drawn to the cafe to revel in the inspiring presence left behind by these iconic figures.

As far as the food goes, Cafe Les Deux Magots holds its own. While you’re here, try out some classic French specialties such as the Giant and wild Burgundy snails (18 euros), Duck foie gras and Poilâne bread toasts (28 euros) or the Deux Magots-style beef tartare (25 euros).

Although this cafe is on the more expensive side, it’s well worth the visit.

If you’re more of an existentialist, I recommend heading across the street to Café de Flore. Known as the place Jean Paul Sartre would discuss existentialism with his wife Simone de Beauvoir, this cafe is all about philosophy, people watching, and good food. The cafe itself is also an attraction for lots of famous folk, especially with its annual literary prize known as the Prix de Flore.

We definitely suggest finishing the meal off with a delicious hot chocolate! 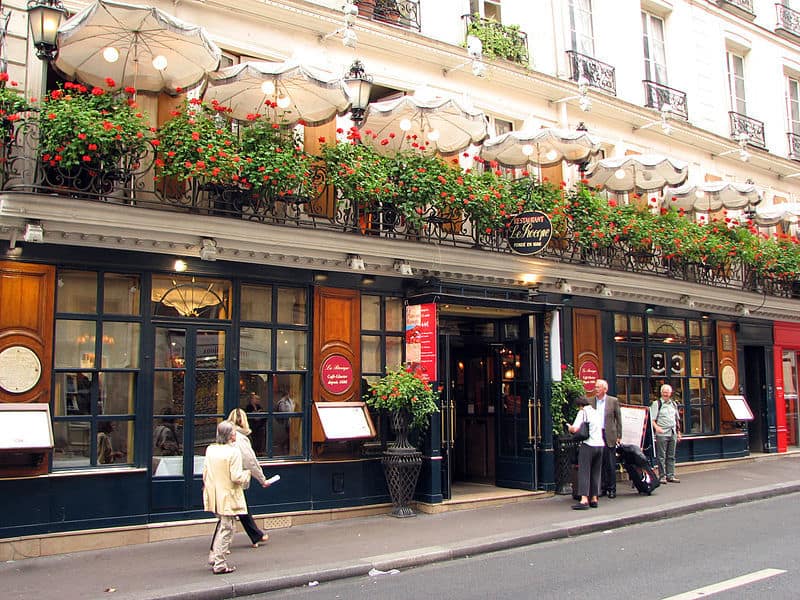 Café Le Procope, located at 13 Rue de l’Ancienne Comédie, is the oldest cafe in Paris! This legendary spot was, you guessed it, a meeting place of some of the greatest artists and writers of all time.

This traditional French restaurant is standout in terms of its cuisine, with some of its specialties being the classic Coq au vin, braised ox cheek, and filet de boeuf. We will warn you: this place is a bit on the pricer side, with main plates coming in around 20-38 euros.

If you want a historical but also delicious Parisian experience in Saint-Germain des Près , we highly suggest you head over to Café Le Procope.

And as the years go by, generations of deputies, literary men, artists succeed each other at my place. Frequent visitors for a long time, whom I have known since they were children, are still loyal to my brasserie and delight in reminding memories from this place. I know they like this immutable institution. -Marcelin Cazes

Last but not least in our literary restaurant tour is the famous Brasserie Lipp. Located at 151 Boulevard Saint-Germain, Brasserie Lipp sponsors a literary prize each year named the Prix Cazes to a special author whom has been yet to be published.

Opened by Léonard Lipp and his wife Pétronille, Brasserie Lipp has been attracting writers for ages, most notably American writer Earnest Hemingway, who mentions it frequently in his 1964 memoir A Moveable Feast.

When it comes to food, you can expect excellent French cuisine and menu items such as marinated tuna filet, (17 euros)  a decadent caviar selection, (115 euros) or escargots de Bourgogne (24.50 euros).

As you can see, the prices here are rather steep, so perhaps Brasserie Lipp will serve as the “splurge” meal for those literary fanatics who wish to try out traditional, high-end French cuisine.

Otherwise, order a coffee or a hot chocolate and simply spend your time in a magical spot that inspired many authors! 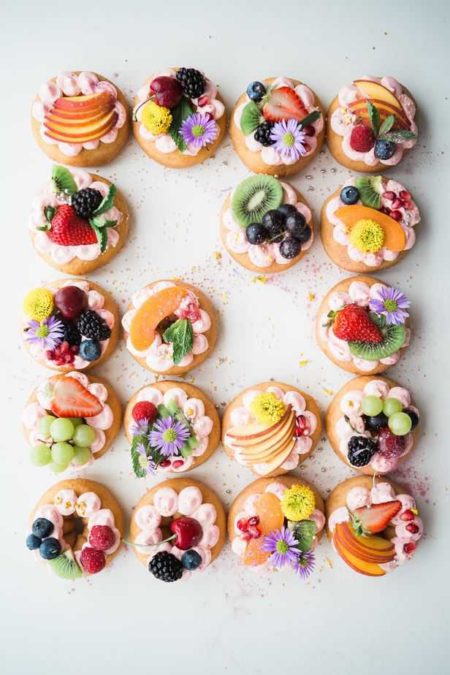 If it’s a light snack or something sugary you are craving, then I suggest heading over to Pâtisserie Michalak at 8 Rue du Vieux Colombier. This elegantly inviting patisserie offers all the best of France’s most famous pastries and has a wonderful selection of tastes and small cakes.

Will you try the Flan Parisien or the Paris Brest? Oh, but surely you have to go for the fondant chokopraline.

Arguably the best location of all of the Laudrée establishments,  if you are feeling on the fancier side then head right on over to 21 Rue Bonaparte. Laudrée is all about two things: elegant interiors and macaroons.

If you haven’t had the chance to try a true French macaroon, then now is the time! Laudrée’s extensive selection of flavors is sure to intimidate, but not to worry- there is no wrong choice here! 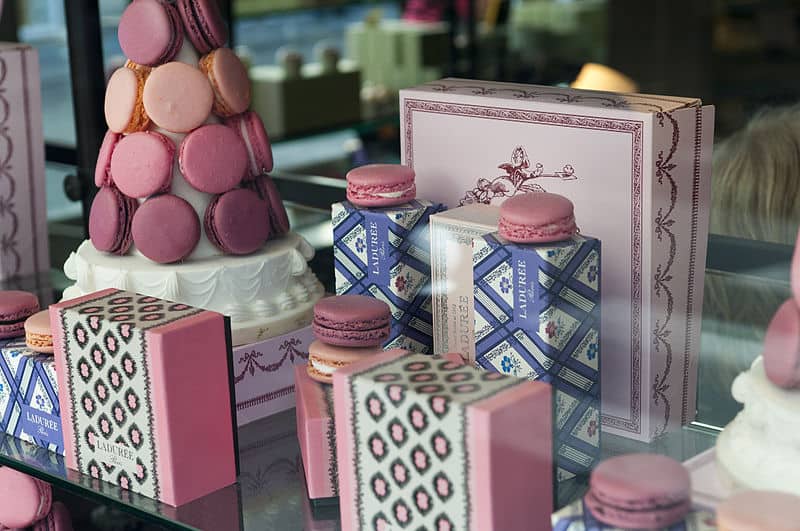 For one of the best American bakeries / restaurants in the city, I suggest Treize (13) at 5 Rue de Médicis. Their motive is simply to “bring a bit of down home goodness and old fashioned joy to the chic Saint Germain des Près area.”

And they have! If you find yourself curious about what “southern food with a French twist” tastes like, this will surely be on your list!

One secret gem of the Saint-Germain area is Semilla at 54 Rue de Seine. This delightfully modern restaurant is known for its incredible cuisine at a relatively low price. Of it’s all stars are ceviche, fish, and their excellent selection of wine and cheeses.

For an exciting dining experience, I suggest heading over to Ze Kitchen Galerie. This restaurant is colorful, lively and offers a different side of Paris to any visiter that finds themselves here.

According to the chef, “His cuisine is derived from the dialogue between his passion for Asia and his respect for French culinary tradition.” Although the menu changes frequently, you can expect a starter here at 28 euros, and a  main course here at around 41 euros for dinner. 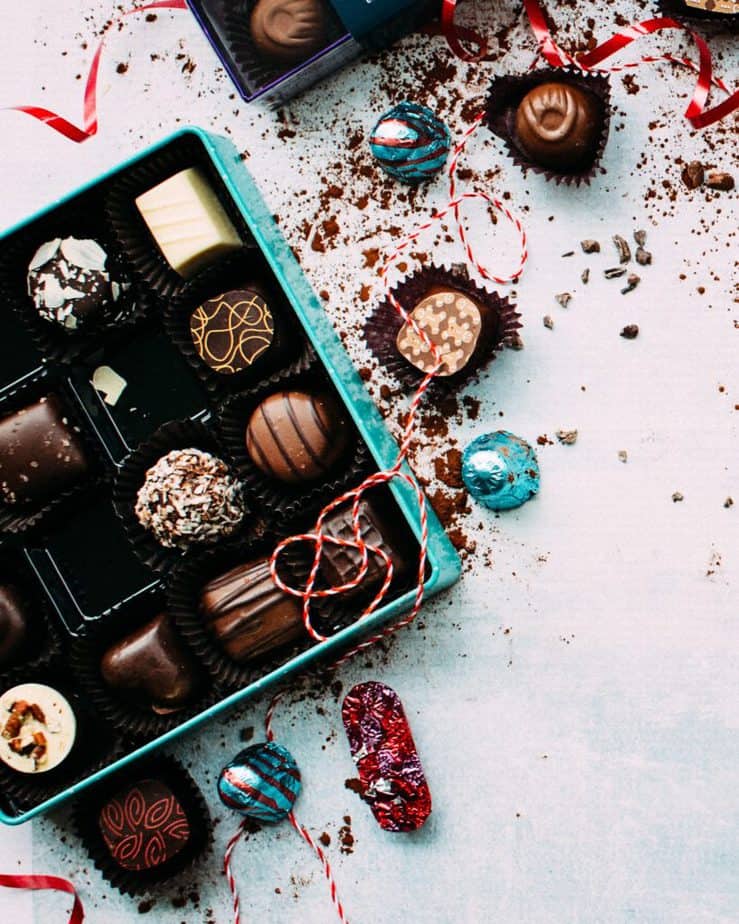 If it’s something sweet you are craving, why not head over to Henri Leroux at 52 Rue Saint-Dominique for some of the best artisanal chocolate in Paris. Need we say more? You’re already sold.

Hopefully this list helps you in your Saint-Germain des Près adventure! There is much more to the neighborhood than just food, however. Why not try out the Discover Walks walking tour of Saint-Germain? It’s free!