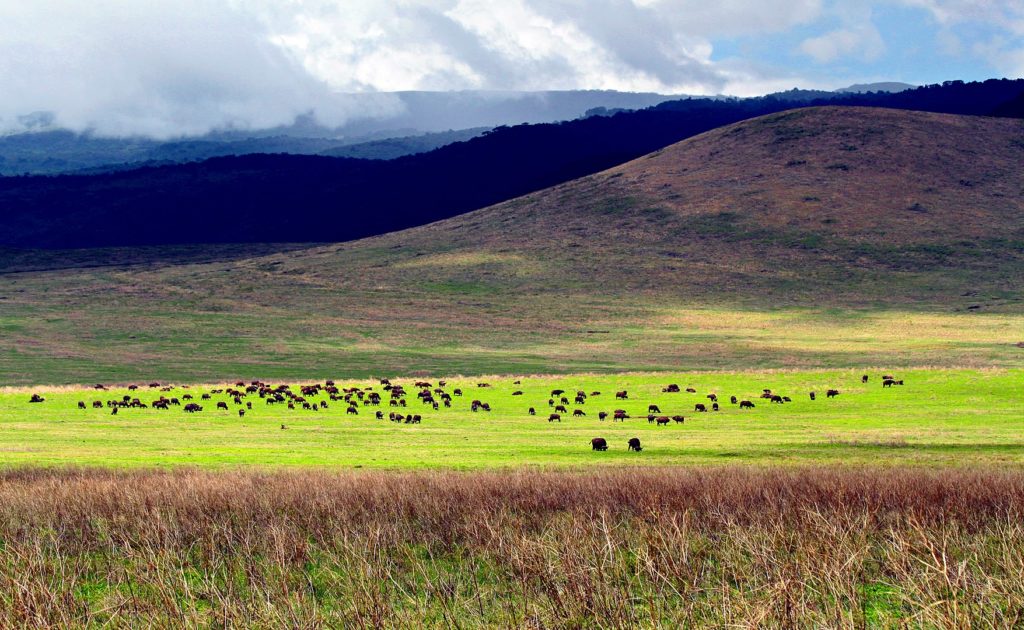 The Ngorongoro crater in Tanzania is the world’s largest inactive caldera. Its crater floor is 260 square kilometres wide and 600 meters deep.

This crater was formed over 2 million years ago after the active volcano collapsed. Today, the area around the mountain is a conservation area known as the Ngorongoro Conservation Area of Tanzania.

It is one of the leading tourist attractions in Tanzania attracting millions of tourists annually.

Being one of the largest inactive and unfilled caldera in the world, the Ngorongoro crater is an absolute natural wonder.

A fascinating fact, before we get to the top 10 facts, is that this mountain was once taller than Mount Kilimanjaro.

This was so much so that the weather pattern around Ngorongoro was different from the rest of Tanzania as well as the water flow. It was until its collapse the tallest mountain in the region.

The Ngorongoro Crater is home to wildlife and several bird species. Learn more about this Caldera in the top 10 facts below.

1. The Ngorongoro Crater is a UNESCO Heritage Site

One fascinating thing to do while travelling is touring World Heritage Sites and learning the rich history behind them.

Such sites offer memorable experiences and deserve preservation for future generations. This is the same with Ngorongoro Crater.

It is a conservation area that was listed as a UNESCO World Heritage Site in 1979, 20 years after it was established.

Its deep and wide crater is the largest and most intact volcanic caldera in the world.

Conservation work has been going on at this Site for more than a century. This place was also declared a zone for multiple land use. Both humans and wildlife live in harmony.

2. It was at Ngorongoro Crater that Dr Leakey discovered the remains of Homo Habilis 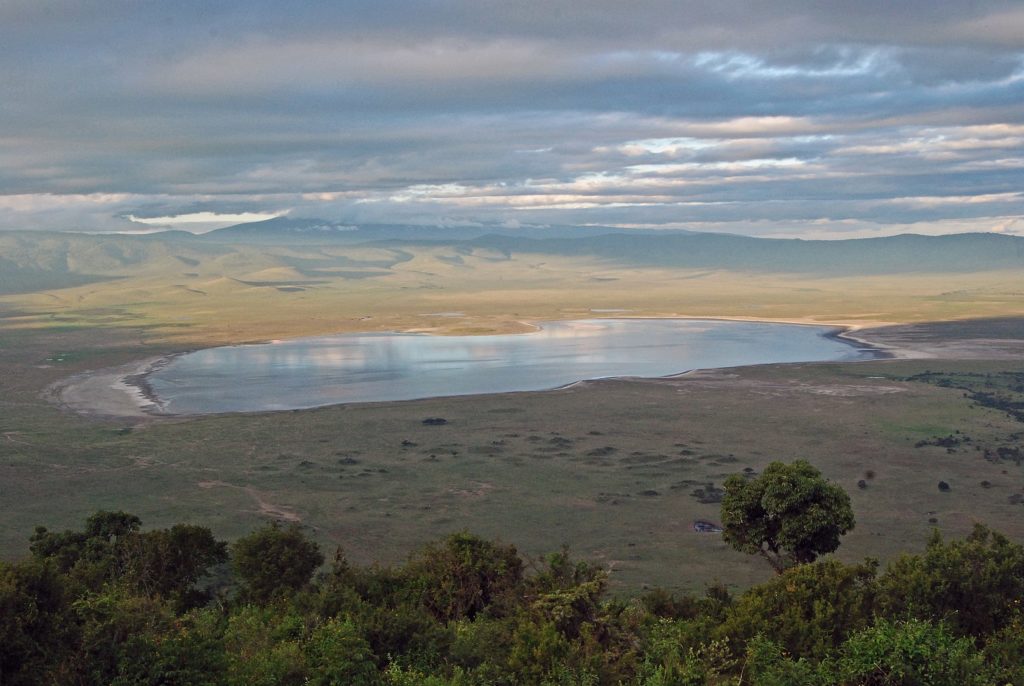 Another remarkable fact about this Crater is that it is known as the Cradle of Mankind. This is because the remains of Homo Habilis were discovered here.

There is a museum in Olduvai Gorge in Ngorongoro Crater where one can find the real as well as replicas of the skeleton discovered here.

Dr Louis Leakey, an archaeologist, is credited with this discovery of the evolution of mankind. The Homo Hablis skeleton was part of the first stages of human evolution.

Olduvai Gorge is still an active archaeological site. The site is about 14 kilometres long on the eastern side of the Crater.

Ngorongoro Crater lies in the Great Rift Valley, a very significant area in the development of Human Kind.

3. The Ngorongoro Crater was formed more than 5 million years ago

Before this massive caldera looked like it does today, it was once an active volcano and the tallest mountain in the region.

Millions of years later, the volcano erupted and collapsed, in the process, it created a bowl-like depression, the caldera you see today.

It looks like a gigantic cooking pot, hence the Spanish word caldera. This happened more than two and a half million years ago.

4. Ngorongoro Crater is the Largest unbroken in the world

A caldera is a kind of crater that has collapsed on itself. The Ngorongoro Crater is the world’s largest and unbroken caldera.

Its crater walls have never been breached. Consequently, Ngorongoro Crater is made up of a beautifully in-tact wall.

This caldera is special because it is the only one in the world that has yet turned into a lake.

5. The Ngorongoro Crater is home to the Maasai tribe in Tanzania

The Ngorongoro Crater is one place where both humans and wildlife live in harmony.

One community that lives here is the Maasai tribe. They are indigenous to this region.

Before the Maasai tribe moved here, the crater was inhabited by the Barabaig and Datooga tribes. The Maasai moved in and kicked out the original inhabitants of the crater.

Today, a majority of the Maasai tribe call this place home. They are found in the south and the east side of the crater.

The name Ngorongoro is from the Maasai tribe meaning the gift of life.

Part of the tour of the Ngorongoro Crater involves visiting the Maasai villages for a glimpse into their rich culture.

They are one of the East-African tribes that are still deeply rooted in their culture.

6. This Crater is home to the big five 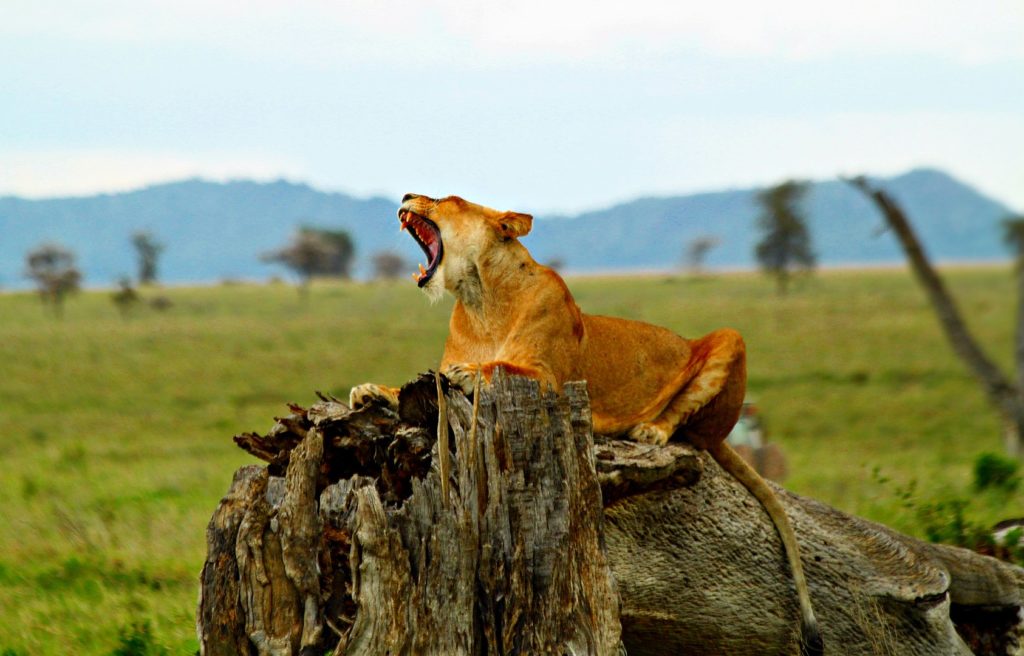 Ngorongoro Conservation Area is home to the big five animals, lions, elephants, cheetahs, leopards, and buffalos. It is also home to the endangered species, black rhinos. The lions found here are all related.

If you are a bird watcher, then you will have a great time here. Birdlife is abundant with over 500 bird species. Some birds to look out for ostriches, kori bustards, secretary birds.

Some of the animals found here are at the brink of extinction hence very strict conservation laws in Ngorongoro Crater.

7. The Ngorongoro Crater is one of the Seven Wonders of Africa

As the largest crater in the world, Ngorongoro Crater is such incredible natural beauty.

It is for this reason that it has been listed as one of the Seven Natural Wonders of Africa.

The other six are the Sahara Desert, Okavango Delta in Botswana, the Nile River, The Great Wildebeest migration, Mount Kilimanjaro, and the Red Sea Reef.

8. The highest population of Lions is found in Ngorongoro Crater

The Ngorongoro Crater has the largest known population of lions. All of them are related, none of them has ever left the crater.

Therefore, there is no new bloodline of lions in Ngorongoro. Male lions here rarely leave or enter the crater because of the steep crater walls.

This has made the lions the most studied in the world by researchers ad scientists.

The eight prides of lions living in the crater each have a name and so do each of the individual lions.

9. The Ngorongoro Crater is where the great migration happens

Ngorongoro crater is not only home to the Big Five, a natural wonder but also a place where one of the natural wonders takes place.

The Great Wildebeest Migration begins here. These wildebeests migrate between the Serengeti Plains and the Ngorongoro Conservation Area twice a year.

Their meeting point before they migrate is in the Ngorongoro Crater. An estimate of 2 million animals, wildebeest, zebra, and gazelles take part in the migration.

They move north, to Kenya, during the wet season after calving season is over. This is usually between June and August; they then move back south in December.

10. The tribes living in Ngorongoro Crater are not allowed to practice large scale farming

While the Ngorongoro Conservation Area is a multipurpose reserve, one practice that is restricted here is large scale farming. Only subsistence farming is allowed.

The Maasai tribe that lives here are pastoralists and are always moving in search of greener pastures.

It is only in Ngorongoro that such law allows both humans and animals to live in harmony.

This law prevents the deterioration of this historic site as well as the endangered species of birds and animals.