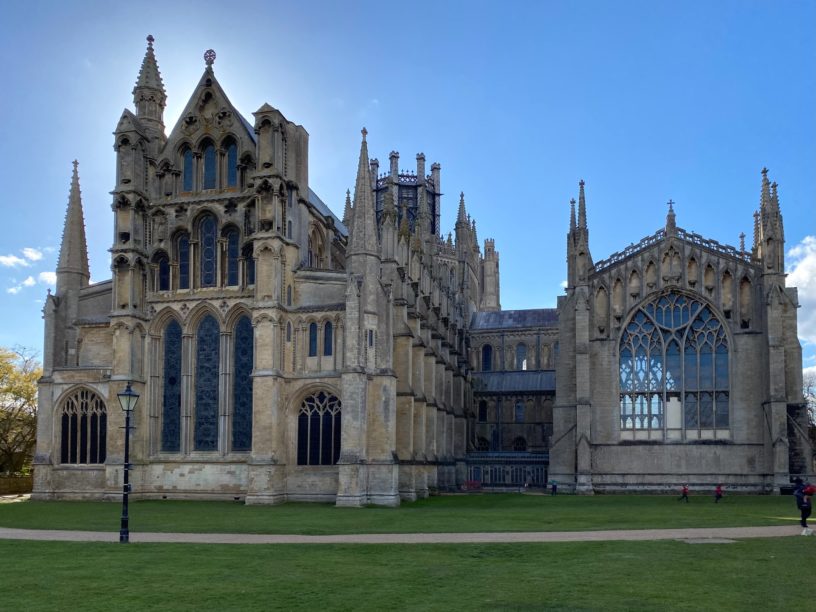 Ely Cathedral is an Anglican cathedral in the city of Ely, England. It was formally known as the Cathedral Church of the Holy and Undivided Trinity. 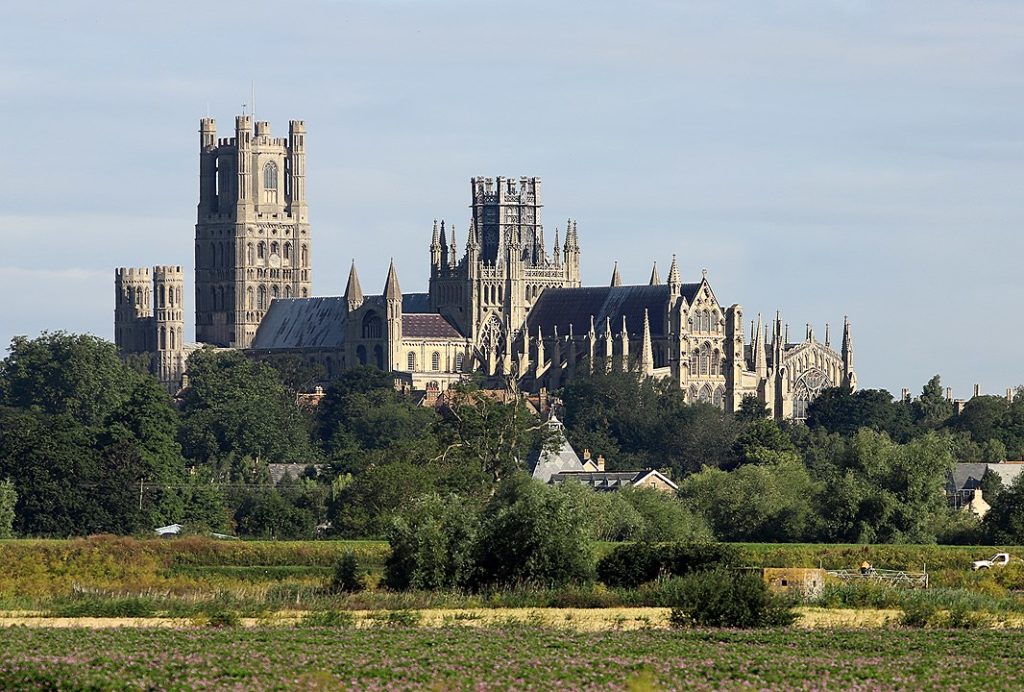 The origins of the cathedral date all the way back to AD 672. This is when St Etheldreda built an abbey church.

St Etheldreda was an East Anglian princess, and Northumbrian queen. She was also an Anglo-Saxon saint, known also as Etheldreda or Audrey, especially in religious contexts.

2. Ely was granted the cathedral status in 1109 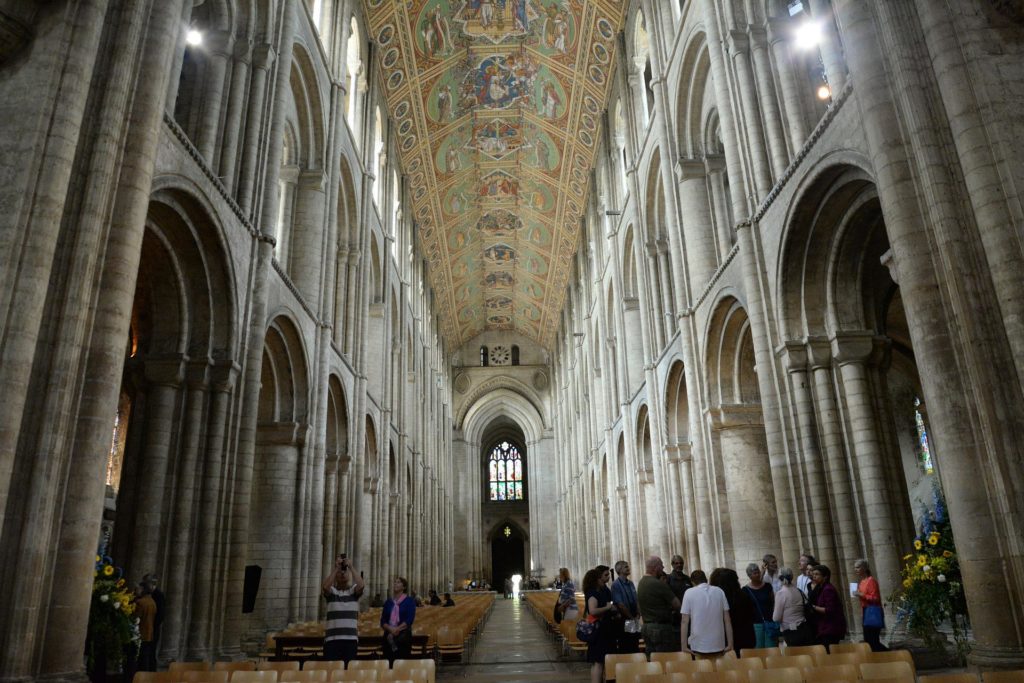 Image by Diego Echeverry from Pixabay

The present building as we know it dates back to 1083. It was granted cathedral status in 1109.

Until the Reformation,  which took place in 16th-century England when the Church of England broke away from the authority of the pope and the Roman Catholic Church, it was known as the Church of St Etheldreda and St Peter.

It was refounded as the Cathedral Church of the Holy and Undivided Trinity of Ely. It is now the seat of the Bishop of Ely and a suffragan bishop, the Bishop of Huntingdon.

3. Its architectural detail is quite phenomenal 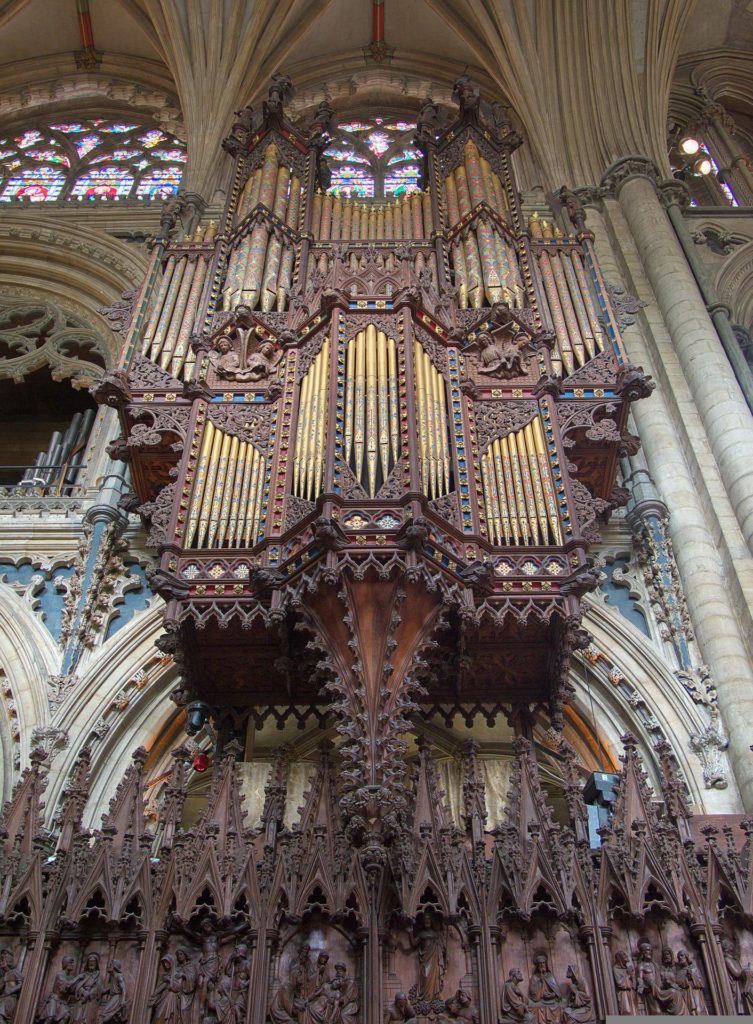 Image by Emphyrio from Pixabay

Architecturally, Ely Cathedral is outstanding both for its scale and stylistic details. Having been built in a monumental Romanesque style, a medieval architectural style characterized by semi-circular arches, the galilee porch, lady chapel and choir were rebuilt in an exuberant Decorated Gothic.

Its most notable feature is the central octagonal tower, with a lantern above, which provides a unique internal space and, along with the West Tower, dominates the surrounding landscape.

Ely Cathedral is a major tourist destination, receiving around 250,000 visitors per year, and sustains a daily pattern of morning and evening services.

4. Viking raidings may have resulted in its destruction; although it was reformed later 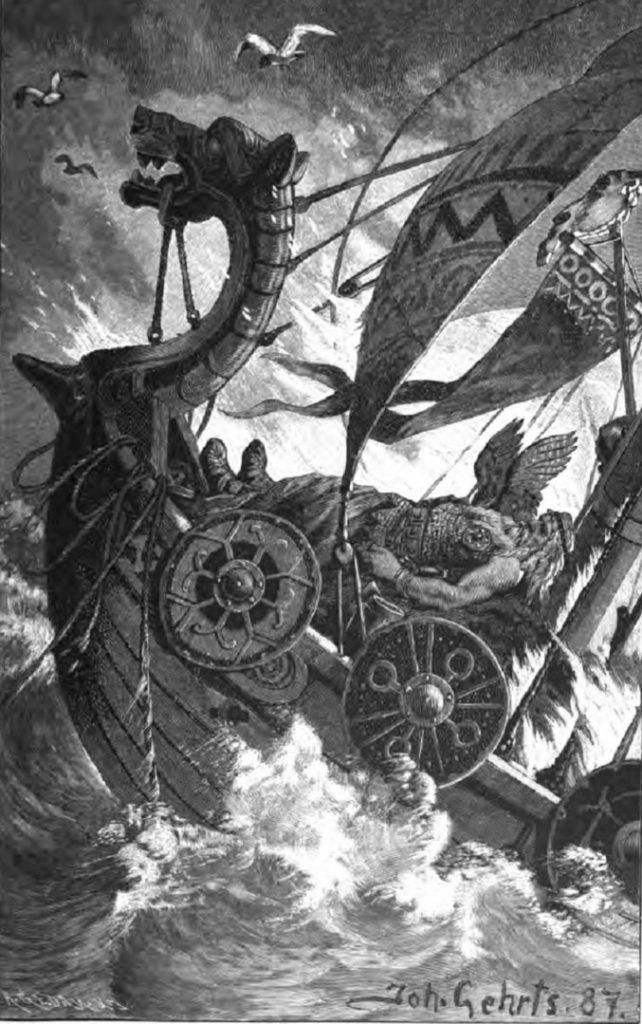 In later centuries, the depredations of Viking raids may have resulted in its destruction or at least the loss of all records.

It is however possible that some monks provided continuity through to its refoundation in AD 970, under a Benedictine rule. These were rules founded by Benedict of Nursia, a 6th-century monk who laid the foundations of Benedictine monasticism through the formulation of his Rule of Saint Benedict.

5. It is built from stones quarried from Barnak

Barnack is a village and civil parish, now in the Peterborough unitary authority of the ceremonial county of Cambridgeshire, England and the historic county of Northamptonshire.

Ely cathedral is built from stone quarried from Barnack in Northamptonshire (bought from Peterborough Abbey, whose lands included the quarries, for 8000 eels a year), with decorative elements carved from Purbeck Marble and local clunch.

The plan of the building is cross-shaped, with an additional transept at the western end.  The cathedral is known locally as “the ship of the Fens“, because of its prominent position above the surrounding flat landscape.

6. Ely cathedral was refounded by a royal charter following the dissolution of monasteries in 1539 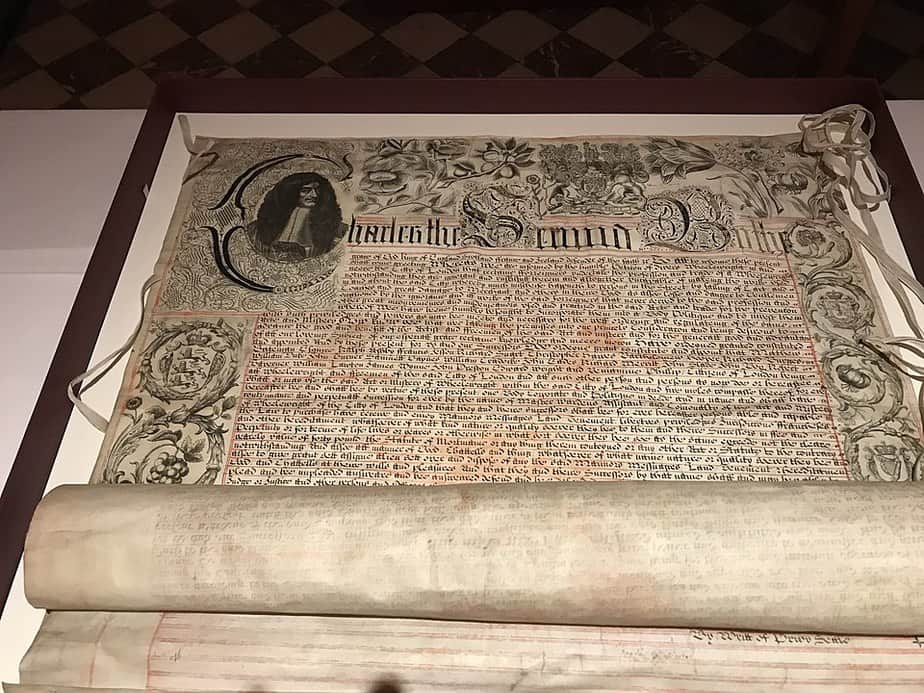 An example of a royal charter- Author; Nickdutt60- Wikimedia

In 1539, during the Dissolution of the Monasteries, the monastery surrendered to Henry VIII’s commissioners.

The dissolution of the monasteries, also referred to as the suppression of the monasteries on occasion, was the set of administrative and legal processes between 1536 and 1541 by which Henry VIII disbanded monasteries and convents, in England,  Wales, and Ireland, dispossessed their income and disposed of their assets.

But then the cathedral was refounded by royal charter in 1541 with the former prior Robert Steward as dean and the majority of the former monks all restored.

With a brief interruption from 1649 to 1660 during the Commonwealth, when all cathedrals were abolished, this foundation has continued in its essentials to the twenty-first century, with a reduced number of residentiary canons now supplemented by a number of lay canons appointed under a Church Measure of 1999.

As with other cathedrals, Ely’s pattern of worship centres around the Opus Dei, the daily programme of services drawing significantly on the Benedictine tradition.

It also serves as the mother church of the diocese and ministers to a substantial local congregation.

At the Dissolution the veneration of St Etheldreda was suppressed, her shrine in the cathedral was destroyed, and the dedication of the cathedral to her and St Peter was replaced by the present dedication to the Holy and Undivided Trinity.

8. It is the fourth-longest of the English cathedrals 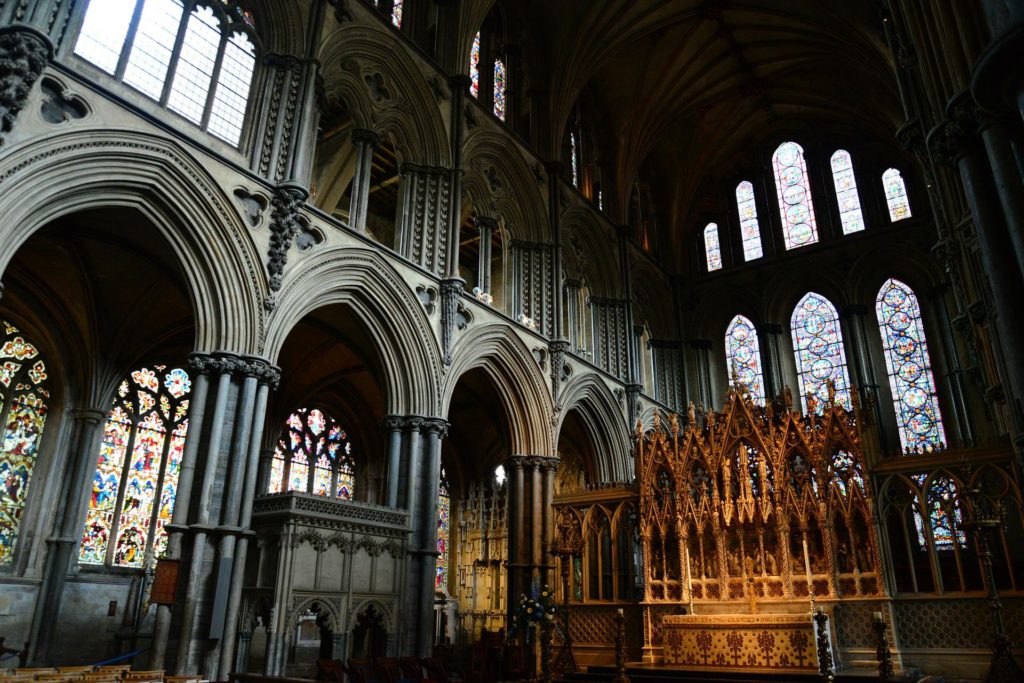 Image by Diego Echeverry from Pixabay

Internally, from the floor to the central roof boss the lantern is 43 m (141 ft) high. The cathedral is known locally as “the ship of the Fens“, because of its prominent position above the surrounding flat landscape.

9. The cathedral arranges its music professionally

The cathedral retains six professional adult lay clerks who sing in the Cathedral Choir along with boy choristers aged 7 to 13 who receive choristerships (scholarships given to choristers) funded by the cathedral to attend the King’s Ely school as boarding pupils.

Ely Cathedral Girls’ Choir consists of girls aged 13 to 18 who are also boarding pupils at King’s Ely and who are funded by the school, not the cathedral.

The Octagon Singers and Ely Imps are voluntary choirs of local adults and children respectively.

10. Ely Cathedral was one of the first cathedrals to have stained glass 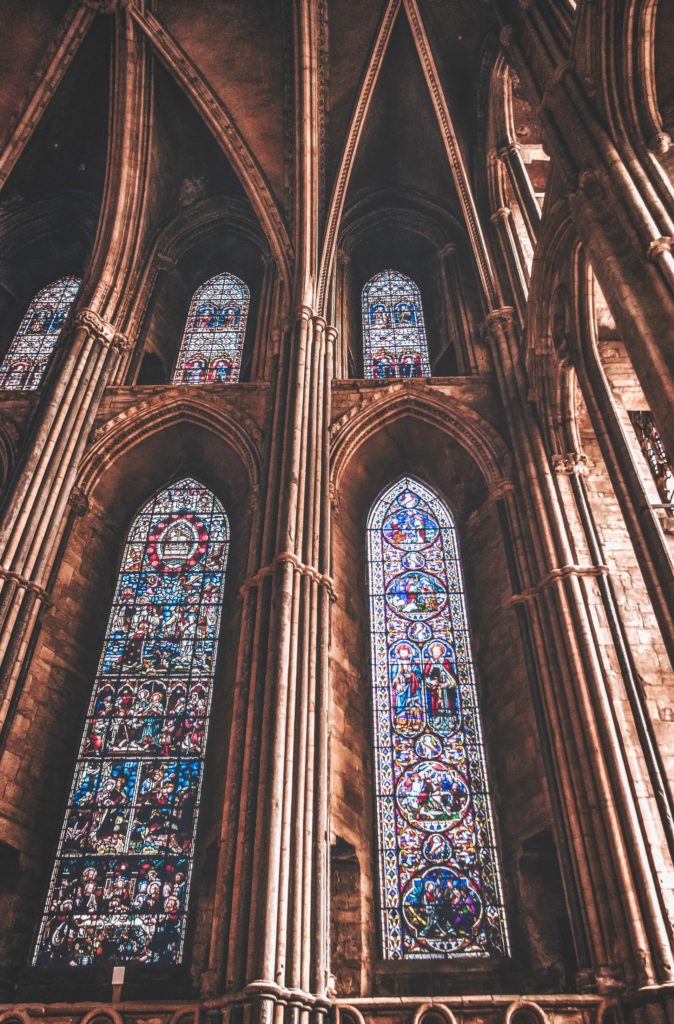 In 1845 Edward Sparke, son of the bishop Bowyer Sparke, and himself a canon, spearheaded a major campaign to re-glaze the cathedral with coloured glass.

At that time, there was hardly any medieval glass (mostly a few survivals in the Lady Chapel) and not much of post-reformation date. An eighteenth-century attempt to get James Pearson to produce a scheme of painted glass had produced only one window and some smaller fragments.

With the rediscovery of staining techniques, and the renewed enthusiasm for stained glass that swept the country as the nineteenth century progressed, almost all areas of the cathedral received new glazing.

Under Sparke’s oversight, money was found from donors, groups, bequests, even gifts by the artists themselves, and by Edward Sparke himself.

Thus a wide variety of designers and manufacturers were deliberately used, to help find the right firm to fill the great lancets at the east end.