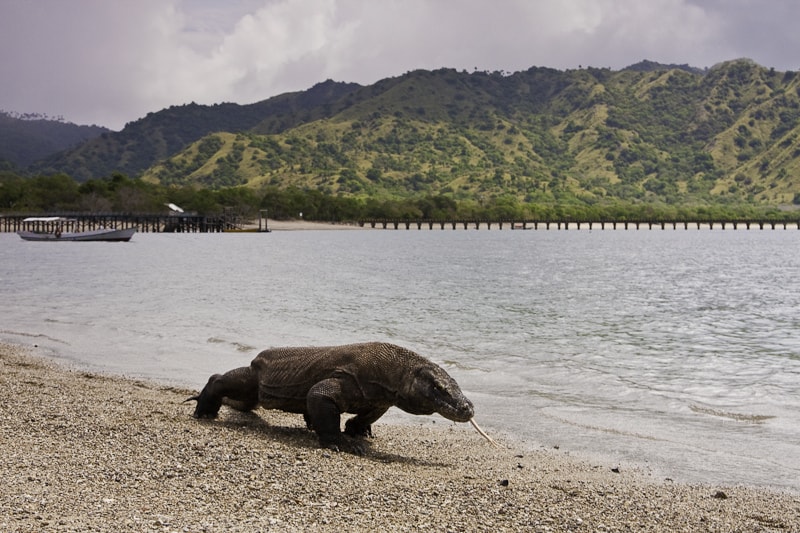 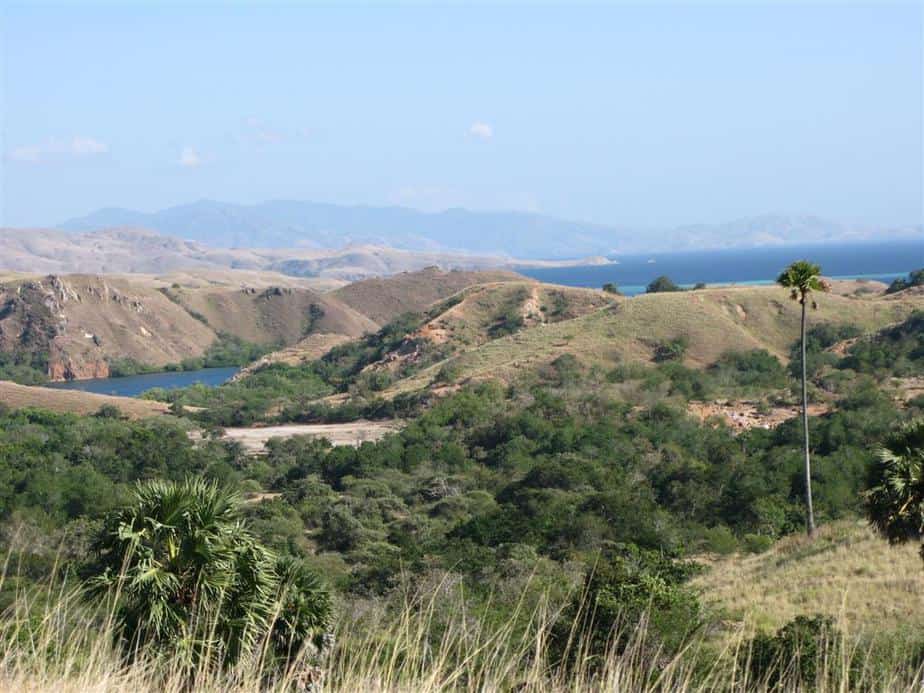 When it comes to natural beauty, Indonesia has incredible beauty and it’s endless. There are several attractions to choose from in this country.

Some of these attractions have been declared heritage sites and are protected by the government.

One of the attractions is Komodo National Park. It is a one-of-a-kind tourist attraction, home to the largest lizards on earth. The Komodo dragon is unique to this country.

This is the oldest animal species still existing today, earning the title the last dinosaur on earth.

Komodo National Park has three big islands; Komodo Island, Padar Island, and Rinca Island. There are other smaller islands too.

As the name suggests, the main attraction to this national park is the Komodo dragon. There are other animals found here such as the mighty Timor deer, dugongs.

Marine life is also abundant here, you will get to see dolphins, turtles, as well as 1,000+ species of tropical fish, corals, and sponges.

One open secret about Komodo National Park is that it has pristine beaches that attract honeymooners. The crystal clear waters are perfect for snorkelling among other water activities.

Here are more amazing facts about the Komodo National Park. Enjoy your read!

1. The Komodo National Park was named as one of the World’s Top Ten Destinations by the National 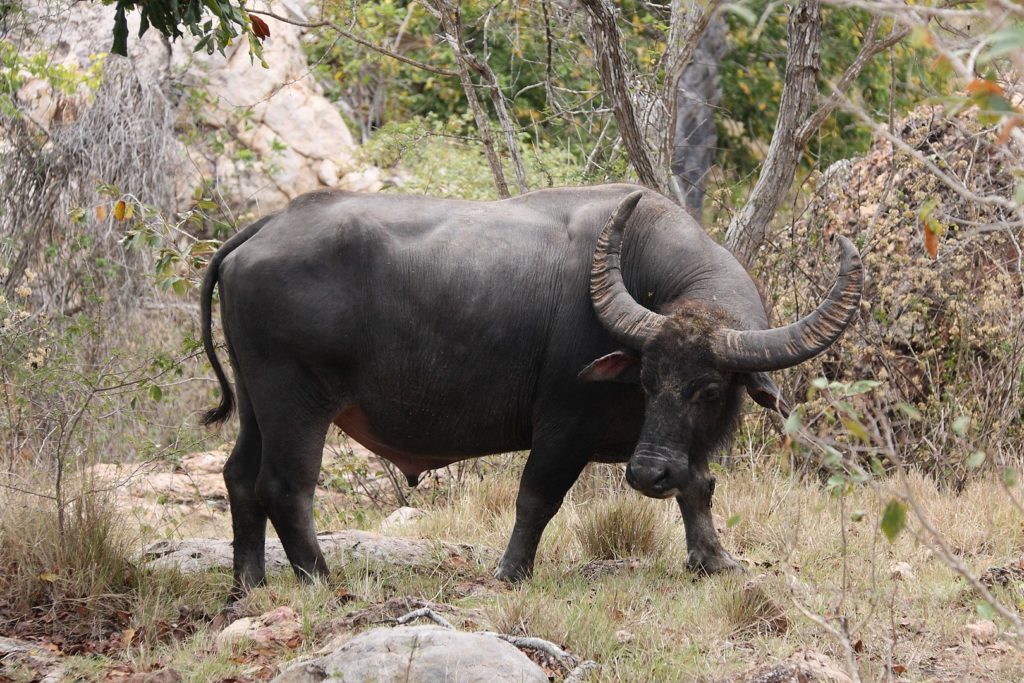 This park was listed by Geographic magazine as one of the 100 Best Destinations around the world in four seasons.

This news was received with praise by the Indonesian leaders who saw this as an opportunity to increase tourism in the country. It was regarded as one of the prime destinations to visit on the island.

Komodo National Park was also selected as one of the New 7 Wonders of Nature.

The park is 1,076-square-mile and has other islands besides Komodo. The komodo dragons are also found on Rinca island.

2. There are more than 5000 gigantic lizards in Komodo National Park 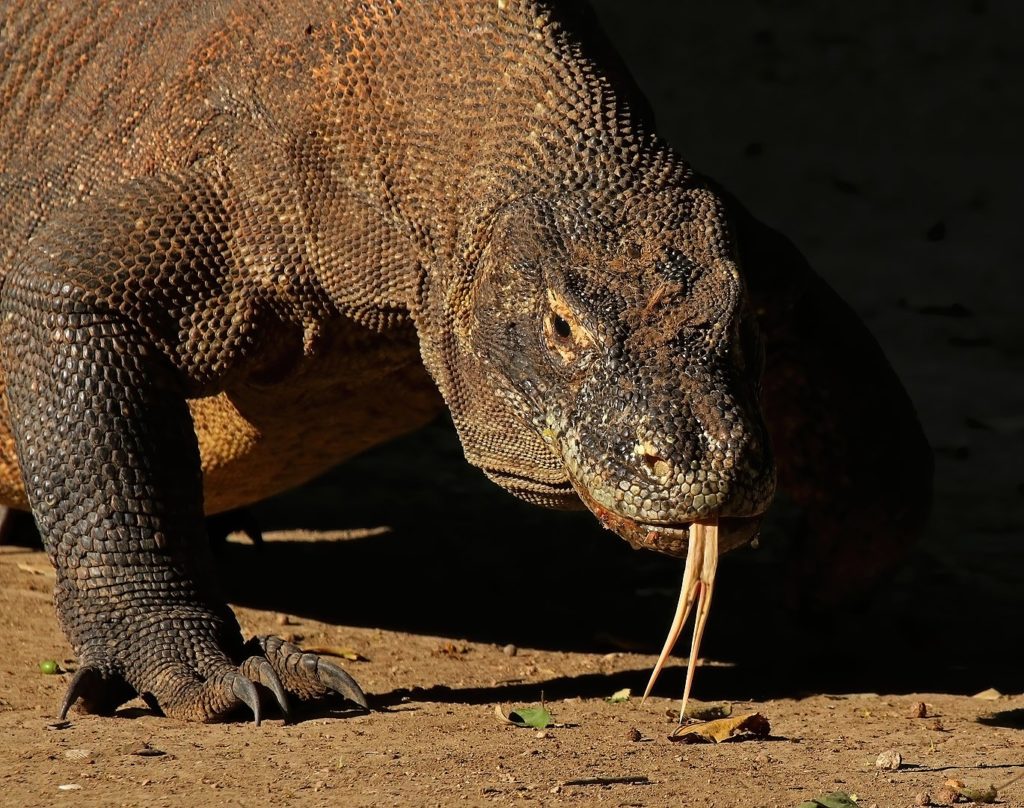 The Komodo National Park is home to a population of about 5,700 Komodo dragons.

These creatures have an intimidating façade ad seem aggressive too, but they are not unless attacked. A fully grown Komodo dragon is 3 metres long and weighs almost a ton.

Their physical appearance has been likened to that of dragons, hence the name Komodo dragons.

They only exist in this archipelago making them interesting to scientists studying evolution.

The Komodo dragons are able to prey on larger animals than them, additionally, they are able to survive in the harshest condition.

3. Komodo National Park is home to a variety of bird species

This national park is home to seven species of terrestrial mammal like the endemic rat and the crab-eating macaque.

There are also 72 species of birds, such as the lesser sulphur-crested cockatoo, the orange-footed scrub fowl, and the noisy friarbird.

The coral reefs at the coast of Komodo is also home to rich marine life. It is home to the blue whale and sperm whale as well as 10 species of dolphin, dugong and five species of sea turtles.

The waters surrounding the Komodo national park is rich with edible fishes and other marine life.

This has attracted fishermen from far and wide who practise illegal fishing. The park management has therefore created a buffer zone to regulate all fishing activities.

They are able to conserve marine life by regulating the type of fishing as well as allowing only registered fishermen.

This has assisted them to reduce the poaching of terrestrial species that provide the prey species for the komodo dragon.

The coral reefs surrounding the coast of Komodo are diverse and fertile due to the clear water. Since the is clear, it allows abundant sunlight which in turn allows the growth of sponges and seaweeds.

The Komodo national park gets most of its support and resources from the central government of Indonesia.

There are specific eco-tourism programs that are run by the government to promote this park in international fairs.

They also do regular patrolling of the waters around the national park to control illegal poaching and fishing.

the community living close to the park is also involved through empowerment programs such as sustainable use of natural resources and park conservation. 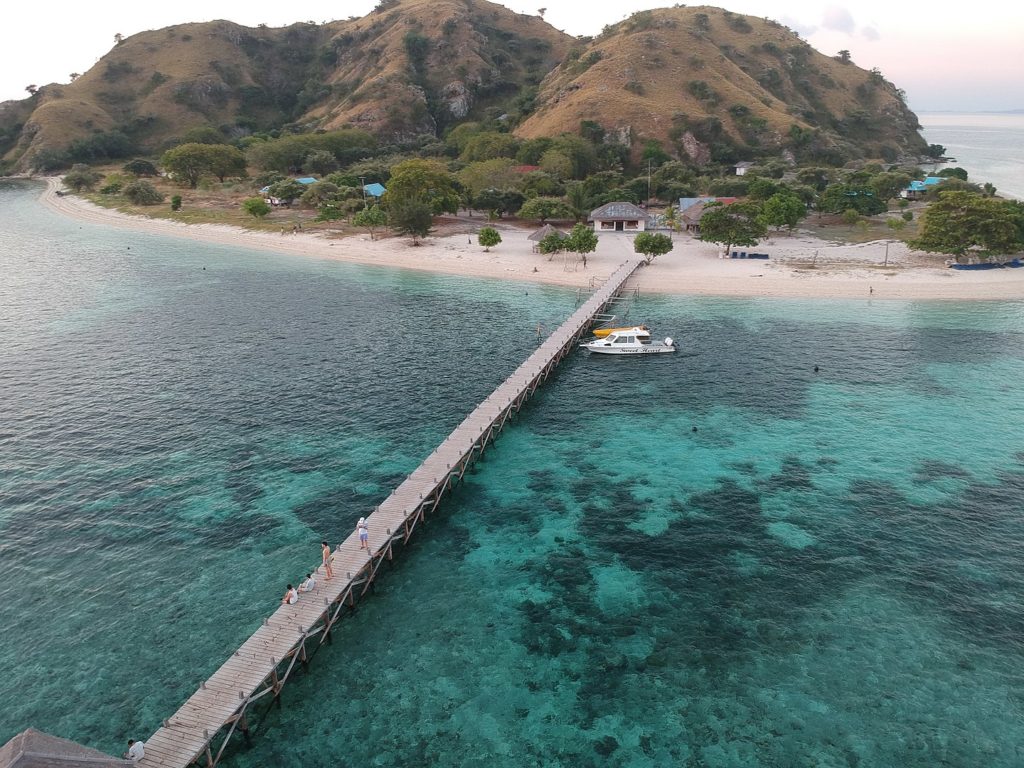 Komodo National Park was established in 1980. In 1991, the park was declared a World Heritage Site and a Man and Biosphere Reserve by UNESCO.

The main purpose of the park was initially to conserve the unique Komodo dragon.

This was after the first European Scientist Lieutenant J. K. H. van Steyn van Henbroek, first discovered by them in 1912 in Reo, Flores Island.

Conservation efforts have expanded to protect the entire biodiversity of the region, both marine and terrestrial.

7. The locals living around Komodo National Park are fishermen

A majority of the people living around the park are fishermen originally from Bima, Manggarai, South Flores, and South Sulawesi.

The ones from South Sulawesi are from the Suku Bajau or Bugis ethnic groups.

This ethnic group was originally nomadic and moved to different locations in the region of Sulawesi, Nusa Tenggara and Maluku, to make their livelihoods.

The original descendants of the people of Komodo, the Ata Modo, still live in Komodo.

Unfortunately, there are no pure blood people left, subsequently, their culture and language are slowly being integrated with modern culture.

There is little information accessible to the public regarding the early history of the Komodo islanders.

8. Scuba diving is a popular activity at Komodo National Park 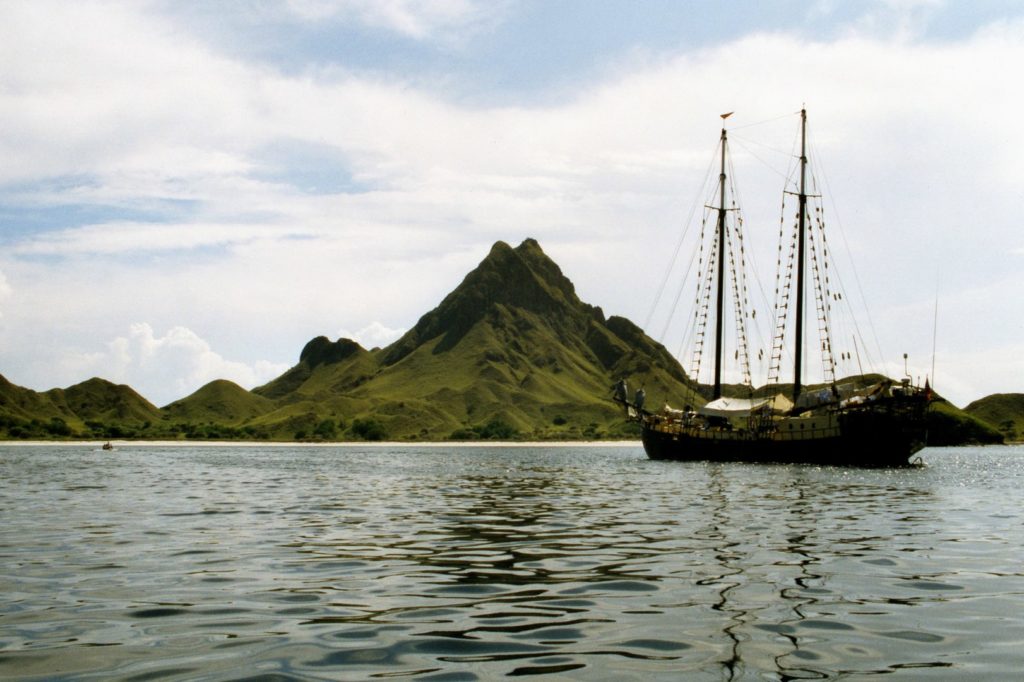 Scuba diving is popular because of the park’s high marine biodiversity.

The development of ecotourism is the main strategy used to make the park self-financing.

This way, it is able to generate enough revenue through entrance fees and tourism licenses.

The number of visitors to the park increased from 36,000 to 45,000 in recent years. A local tourism agency estimated that the park can accommodate 60,000 visitors annually.

9. Komodo National Park has one of the rarest beaches in the world 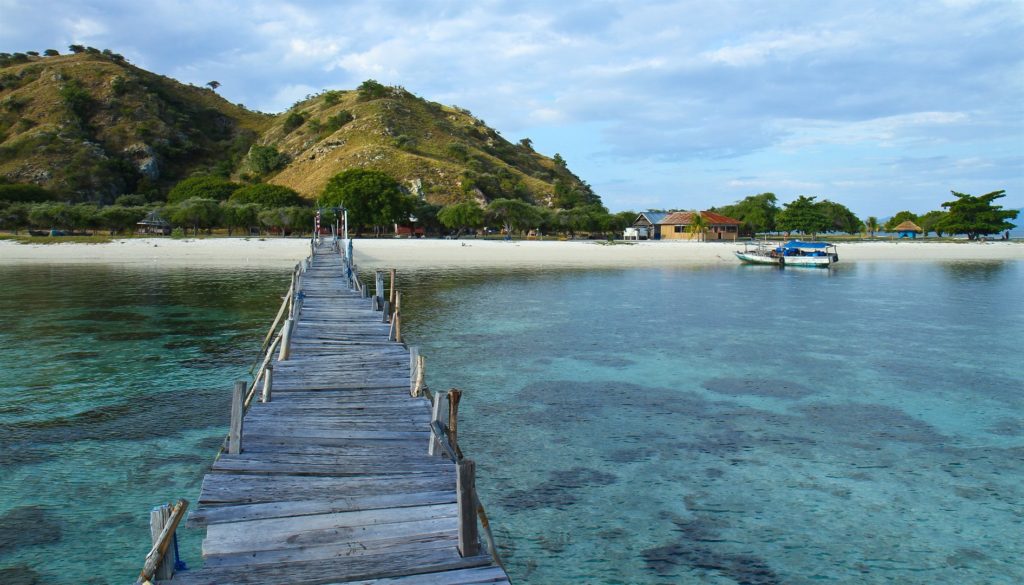 Aside from Komodo dragons, the national park also has incredible outstanding natural landscapes.

One natural wonder is the Pink Beach, one of the only 7 in the world. This beach not only has striking colour but also a tranquil ambience.

It is a perfect getaway for relaxation from busy modern life. Surrounding this beach are beautiful islands, coral reefs ad rich marine life.

There is endless fish life and waterways for snorkelers and divers to explore and enjoy.

10. Komodo National Park is made up of islands

This park has a coastal section of western Flores, the three larger islands of Komodo, Padar and Rinca.

There are also 26 smaller islands and the surrounding waters of the Sape Straights.

These islands are of volcanic origin, therefore, the terrain is generally rugged and has several rounded hills, with altitudes up to 735 metres.

The islands have one of the driest climates in Indonesia. It has surprised many scientists how the Komodo dragons survive in such conditions.

It receives between 800mm to 1000mm of rainfall per year while the temperatures hit 40 °C.