What's in our tour?

Its two thousands years old History left Paris with many dark memories and legends, lurking beneath the city center cobblestoned lovely streets. Yet famous for being the capital of tasteful food and romantic pictures, the “City of Lights” hides from touristic crowds its darkest tales. Therefore we invite you to explore them, if you feel brave enough.

We will first wander within the tight streets of the Latin Quarter, formerly so dangerous at night that a curfew had been ongoing for centuries.

The oldest district of Paris used to be appreciated by alchemists in medieval times, and one of its churches used to be the shelter of a very closed circle of Black Masses and witchcraft during the reign of Louis XIV.

We will pass by the French Revolution jail where Marie Antoinette spent her very last days. Close by, a very simple restaurant, whose owner was accused and executed for practicing cannibalism during the Middle Age.

We will see the beautiful steeple of a church, still carrying the bells that triggered one of the biggest mass slaughter of the XVIth century, and that inspired the “Red Wedding” episode in Game of Throne.

We will look up to the an amazing gothic tower, built, according to the rumors, to a man who reached immortality. A man who truly existed.

We will have a talk about the spectacular fall of the most powerful religious order of the medieval times, the Knights Templars, arrested and prosecuted for terrible crimes and witchcraft.

We will step upon the bottomless pits where the thousands of people killed by the Black Plague used to be thrown. Parisians were scared of the ghosts mourning on those lands and indeed there were many.

We will stand on the very place where one of the most beloved of our kings, Henri IV, got murdered at the beginning of the XVIIth century.

We will walk along the exact same street where the Louis XIV police lieutenants were hunting a vampire that killed more than a dozen young men.

And we will see much, much more…

We meet in front of the famous Shakespeare & Co bookstore. We will end our tour around Chatelet, my favorite district in the heart of the city.

This tour is available every day on request.

Reservations by schools are welcome.

Make a deposit and a guide will contact you immediately. 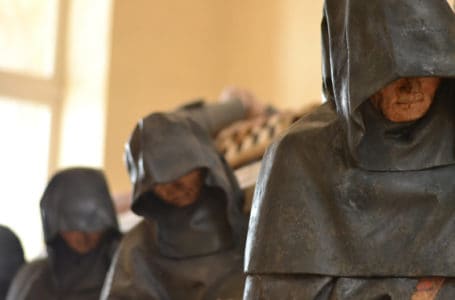 In front of Shakespeare & Co.

This tour is available every day on request.

Make a deposit ($20) and a guide will contact you immediately.

You will pay the balance to your guide when you meet.