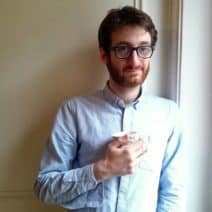 With a name like “ Sean ” it’s difficult to pretend you’re a pure born and bred Parisian. Born in Chicago, Sean arrived in France when he was 6 years old. At school he was regularly called “Jean”, because the french just couldn’t pronounce his name correctly !

Living on the eastern slopes of Montmartre, Sean studied film in Paris, and works as a technician on movie sets. And a part from being a movie buff, he’s also passionate about history and will love to tell you all about the secrets of the city of lights.
As far as hobbies goes, he’s in a theatre group in english, and he definitely uses that for his tours : as an entertainment, first and foremost !
He might not be a Parisian by birth, but he sure is one by adoption. He’s at home here, with such a wonderful access to culture, movies, music and art, which he’ll tell you all about with enthusiasm.

Going back to the states ? Not likely. Sean would miss the food too much ! He just can’t live anymore without his baguette, red wine and cheese !