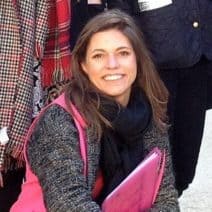 “Astrid is a true “Parisienne” ! She was raised in the 15th arrondissement a neighborhood at the foot of the Eiffel tower. (When she was a kid, she liked to think that the Eiffel Tower was dedicated to her, knowing the shape looks like a big “A”…). After finishing her scholarship at the Bilingual School of Paris, she finally managed to move in a much more central neighborhood : So-Pi (meaning South Pigalle… ) a new trendy area where you can discover many restaurants and cocktail bars with free-gluten food and organic wine !!
For a long time she actually didn’t like Paris because as a tomboy, she thought it was too pretty and not wild enough. But then she became passionate about Art History that she studied at the Sorbonne, and she realized at what point she was lucky to come from a city with so many museums and historical monuments ! Now, her goal in life is to pass on her love of culture and arts in Paris, either by guiding or by filming ! “