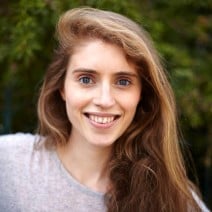 Walking tour guide Adèle’s ultimate goal in life is Cannes film festival ; )
After graduating from a Masters in Management and working in a few companies in Tokyo and New York, she came back to Paris to follow her dreams as an actress.

She has performed in a few plays and films, so it would not be too surprising if she proudly let you know during the Montmartre tour that she was once in a movie with Nicole Kidman (not in Moulin Rouge though!).

Adèle is passionate about the arts in Paris and she loves passing on her enthusiasm to visitors attending her shows – er, tours!