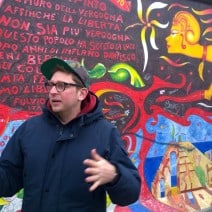 Gregory wanted to be a professional footballer, he soon realised, not everyone thought he was as good as his mum did, this led to him finding a new career path, luckily for you guys he became a tour guide.

He started his career over 13 years ago and has created a variety of fascinating tours around London, including: Graffiti and Street Art, Rock n Roll, Community and Food based Tours.

Graffiti and Street Art is a major part of Gregory’s life and through it he gets to travel and be part of Graffiti/Street Art events world wide. Gregory is often approached by International television stations to be filmed doing tours promoting his city.

His favourite part of London is his home, Brixton.

What he likes most about London are the people

His favourite Londoner was his Great Great Great Grandad who was a hero of the Sidney Street Siege and mates with Winston Churchill.

Doing a tour with him you will certainly find it exciting and passionate and probably end up wanting to be a tour guide in London as you will have fallen in love with this city.