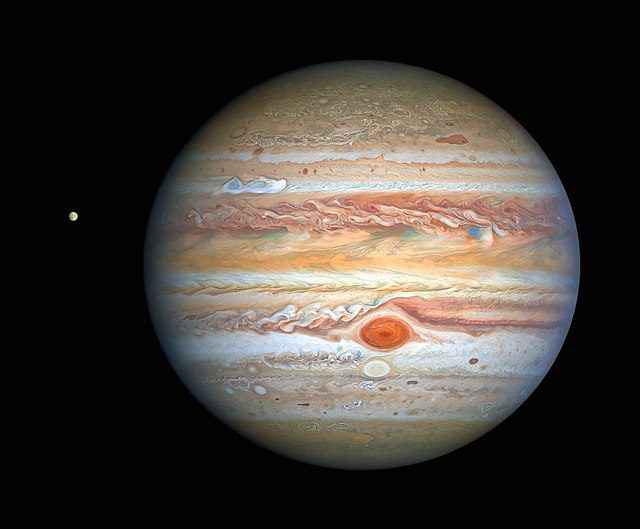 Big indeed. But how massive is Jupiter? It has a radius of 43,440.7 miles or 69,911 kilometers. To get a clear picture, you would need 11 Earths to fit across Jupiter’s equator.

Better still, it is more than two and a half times the size of a combination of all other planets in the solar system. In comparison to Earth, this planet is 318 times as massive as Earth. If you like, 1300 Earths can fit inside Jupiter. Visualize the Earth as a grape, then Jupiter would need to be the size of a basketball. That’s how large we are talking about.

Besides, the mystery is that Jupiter is the fastest planet in the solar system. How come? Its size doesn’t allow it, right? Think again. First, it’s a gas giant like Uranus, Saturn, and Neptune all of which spin faster. Though, here’s the catch for Jupiter, its gravity works wonders.

Jupiter’s gravity enables the planet to attract the most mass as it travels through space. Hence whenever this planet comes across any mass like gas, dust, or rock fragments, it piles this mass into its body.

With that, you may as well forget about sleeping on Jupiter. A day is only 10 or so hours. Let us hold the view that the recommended sleep time for adults is 8 hours. Where is at least room for work or workout time? Discover more Jupiter titbits.

Here are 15 Amazing Truths about Jupiter. 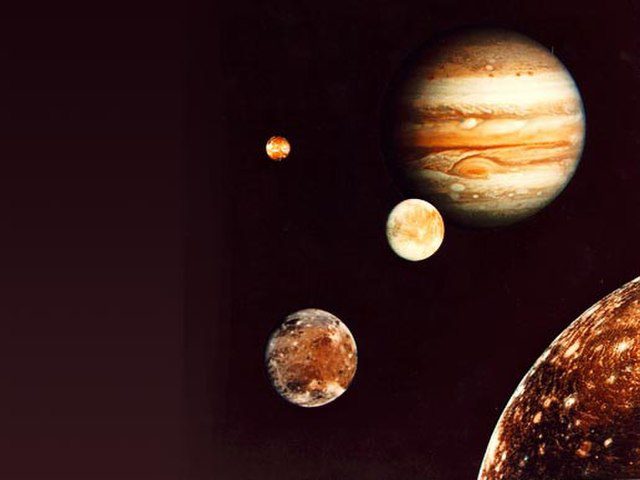 There’s a twofold to this one. First, Jupiter got its name because of its huge size. It is named after the king of the ancient Roman gods. The second version nods Jupiter is the largest and most massive planet in the solar system as earlier discussed.

2. Jupiter is fifth from the sun

3. It has the fastest day among planets

You call it the fastest or shortest day, it’s the same. Jupiter rotates on its axis at a speed of 12.6 km/s or 45,300 km/h. Thus a Jovian day is about 10 hours. This high velocity has affected its shape a little bit. At the poles, Jupiter tends to flatten yet bulge at its equatorial section. So it ends up with an oblate shape. 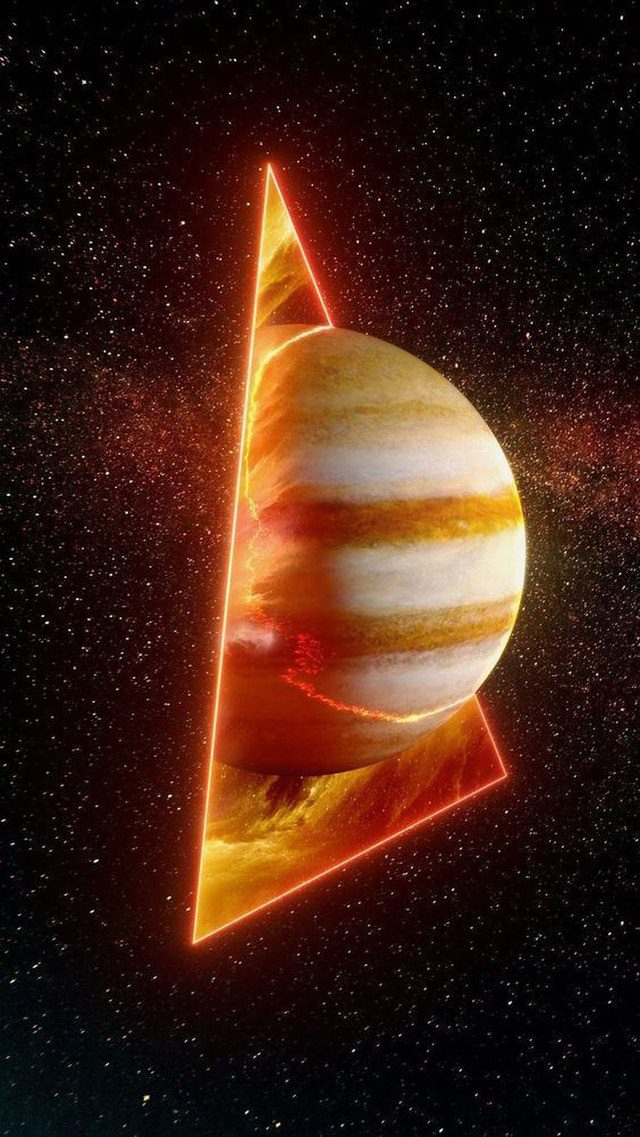 To put it in perspective, a Jovian year is about 12 Earth years. This is the time Jupiter takes to make its way around the sun. The long distance from the sun to Jupiter (earlier mentioned) contributes to the period the planet takes to orbit the sun.

5. Jupiter is first in many things

Besides being the largest and fastest, the planet prides itself in many firsts. It has the strongest magnetic field of the planets. 14 times stronger than Earth’s.

Moreover, it has the largest moon in the solar system. Ganymede is the name of the moon. It was discovered by astronomer Galileo Galilei in 1610 and hence named in his honor. It spans 5,268 km across its center. This makes it bigger than Mercury. Other big moons of Jupiter are such as Io, Europa, and Callisto.

The moons of Jupiter are a total of 80 or thereabout. About 57 of them are confirmed and the rest await affirmation after discovery. Thus Saturn leads in the number of moons as it has 83 with 63 already confirmed.

There is the noise that several of Jupiter’s moons can harbor life. This is because they have oceans beneath their crusts which is a good sign for life support. 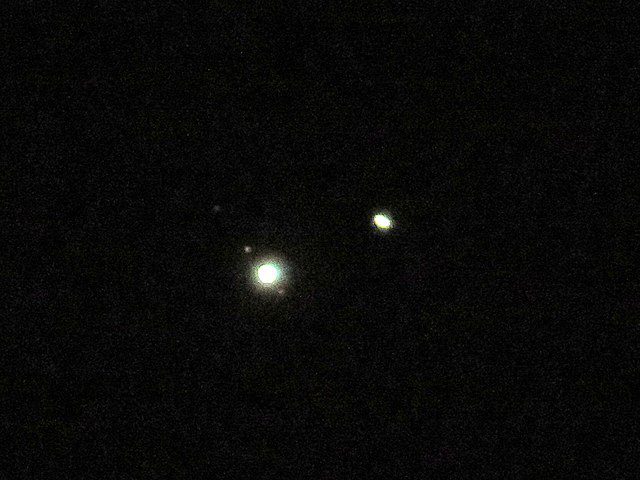 Jupiter (left, with moons Callisto, Io, and Europa) and Saturn (right) during the planetary great conjunction on the winter solstice, 21 December 2020 by O’Dea from Wikimedia Commons

Jupiter ranks as the fourth brightest object in the solar system. It follows after Sun, Moon, and Venus.

This isn’t a spot. Three Earth-sized planets can fit inside it because it is more than 16,000 km east to west. The GRS has been around for over three centuries. According to planetary scientist Paul Byrne, this spot is clouded. More like what we know on Earth as a “storm” but in a supersized sense.

Scientists are divided on the cause of the red color. To some, it’s the effect of chemicals burrowed deep beneath the storm’s cloud tops. Others think that sunlight is responsible. It splits up the chemicals in the storm’s(clouds) upper atmosphere hence the red color. This means that the top of the Great Red Spot is deep red. But the rest of the places may not be very red.

9. The planet has rings 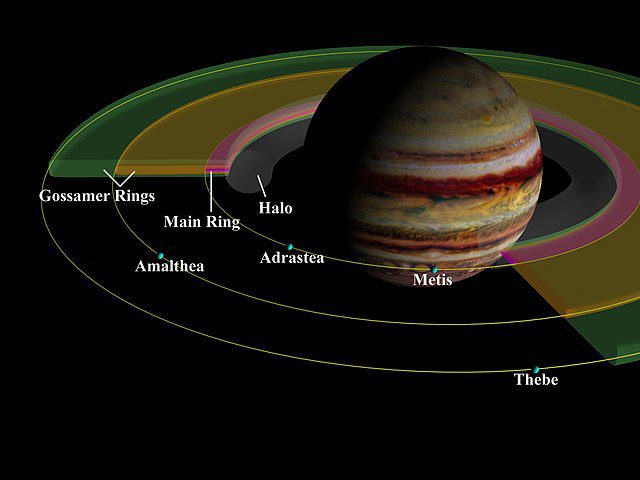 Rings of Jupiter by NASA/JPL/Cornell University from Wikimedia Commons

Jupiter’s ring system is not as gigantic as that of Saturn. Findings by the Voyager mission in 1979, revealed Jupiter has a faint ring system. The ring system breaks down into four segments, the halo is an inner torus of particles. In the middle is the main ring that appears bright.

Then there are the outer two wide gossamer rings. Also referenced as Amalthea and Thebe because they consist of materials from the two moons by the same names.

10. You can spot Jupiter in the sky

The planet appears as a pearly white object to the naked eye as described by physicist Patrick Hartigan, professor at Rice University in Houston. It can be seen throughout any month. Under a telescope, NASA calls Jupiter a tapestry of colorful cloud bands and spots. 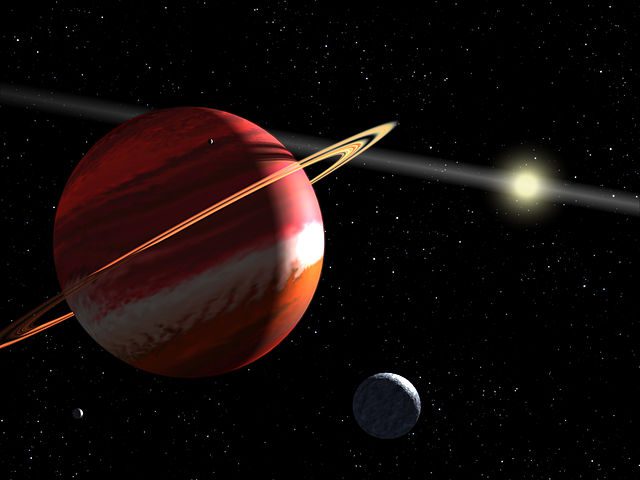 An artist’s concept of a Jupiter-mass planet orbiting the nearby star Epsilon Eridani by NASA, ESA, and G. Bacon from Wikimedia Commons

As earlier pointed out, Jupiter’s gravity glues matter to its surface. Furthermore, this high gravity has the potential to deflect “space junk” such as comets.

So it prevents unwanted material from entering the inner solar system made of Mercury, Venus, Earth, and Mars. This gravitational shield keeps the terrestrial planets safe from space threats.

Clouds play an important role in Earth’s weather. Our planet’s clouds consist of water drops or ice crystals floating in the sky. In the contrast, Jupiter has clouds composed of ammonia crystals, sulfur, and a fusion of the two compounds. These components are found in the planet’s cloud belts and zones in its upper atmosphere.

It is classified as a gas giant and hence lacks an Earth-like surface. Whether its inner core is solid is debatable. In case it is thought of as solid, it’s only about the size of Earth.

14. The planet is a big balloon 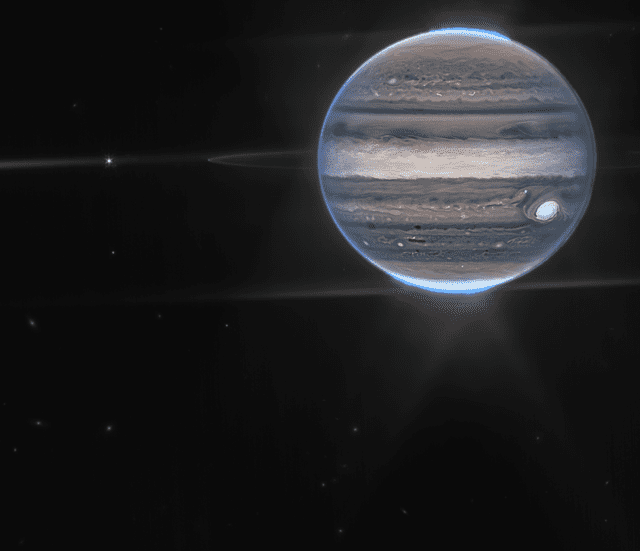 Yes, Jupiter is gigantic. We agree. Yet its atmosphere is made up of light elements. To be precise, it has hydrogen and helium gases dominating its space. Both of these gases are lighter than air and can be used in place of hot air in a hot air balloon.

15. Jupiter is under exploration

This planet has received nine space visits from Earth as of 2022. Seven spacecraft flew by while two aimed at orbiting the planet. Juno is the most recent and ongoing investigation of Jupiter. Launched in 2016, NASA anticipates Juno’s stay in Jupiter will continue through 2025. Or better, until the spacecraft’s end of life.

Read more about the center of the solar system, Top 15 Facts about the Sun.

16. Jupiter was discovered by ancient Babylonians around the 7th or 8th century BC.

17. It has a strong presence in pop culture. The center for many movies, TV shows, video games, and comics.

19. Astronomers have dubbed it the failed star.

20. Jupiter’s clouds are about 50 kilometers thick.

Jump into the conversation. Tell us what else you know about Jupiter that we skipped.