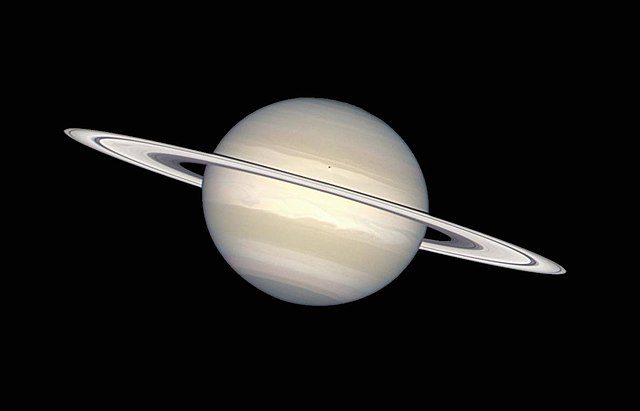 The planet Saturn by NASA Hubble from Wikimedia Commons 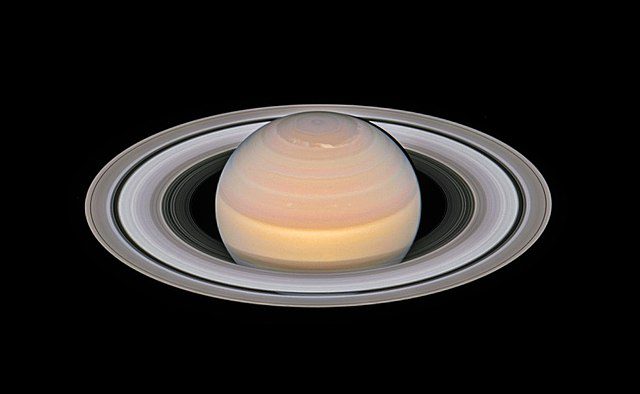 Saturn and Its Rings by NASA Hubble from Wikimedia Commons

Famed for its rings, it’s no wonder Saturn is nicknamed, the “Ringed planet”. But did you know the rings disappear? It’s a mystery. Yet it’s not that they go missing but they tend to be invisible.
Thus, approximately every 15 years interval, Saturn’s equinox happens. This means the sun is over Saturn’s equator. It causes night falls over the entire visible ring system for about four days. During such times, the rings are also in orbit over the planet’s equator. Hence they appear insignificant to the sun.
Subsequently, when observed they seem to be fading away unlike their glorious look as seen during other times. That creates the notion of their disappearance. One such occurrence was in 2008-2009. It’s predicted to occur fifteen years later between 2024-2025. Let’s join more puzzles on the ringed planet.
Here are 10 amazing truths about Saturn.

1. Saturn is a giant in the solar system 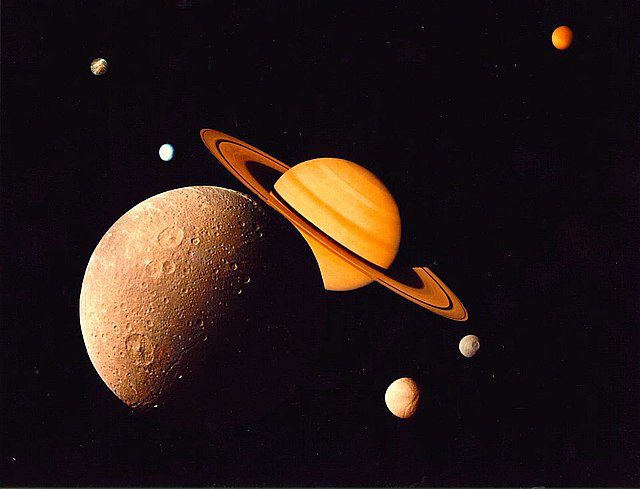 Saturn and several of its satellites by NASA from Wikimedia Commons

This planet is the second biggest in the solar system. It follows after Jupiter whose radius is 69,911 km. Saturn’s radius is 58,232 km. It means more than 700 Earths would be needed to make up Saturn. Do you want to know how many Mars-sized planets would fill up the earth?
Read more about Mars here, 20 Fun Facts about Mars.

2. You would become an idol if you stood on Saturn

The planet is full of swirling gases and liquids deeper down with no true surface. So standing anywhere on the planet is impossible. This is the best part of such an environment, a spacecraft would have nowhere to land but it would be unscathed flying through the planet.
Hydrogen makes up almost 75% of the atmosphere and helium is about 25%. Other substances like methane and ammonia traces are also available.

3. Saturn’s rings are large but not massive

The rings are made up of ice, dust, and rock fragments. So they are not solid. The pieces are not equal in size, some are as small as grains of sand and there are large ones that are the size of skyscrapers.
This planet’s ring system extends about 175,000 miles or 282,000 kilometers from the planet. The vertical height is approximated as 30 feet or 10 meters in the main rings. So Earth can be a dwarf to Saturn’s ring size but when it comes to the most massive, our planet takes a lead. Earth is about 200,000 times more massive than Saturn’s rings.

4. Saturn is visible from Earth with the naked eye 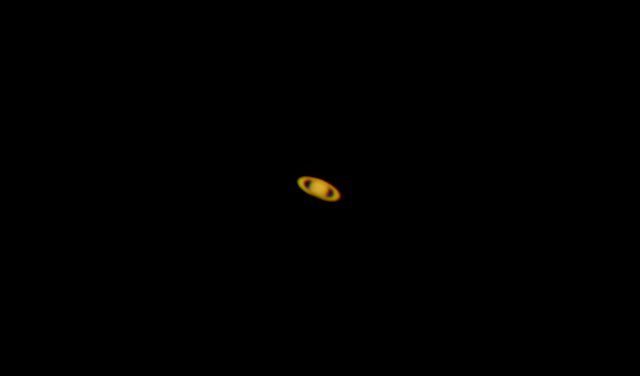 The planet Saturn by Dennis from Wikimedia Commons

You can observe the planet in the evening after sunset. It has a hazy yellow-brown or yellowish-golden appearance. For a distinct view of the rings, you will need at least 25 to 40x magnification equipment. That means even a binocular telescope with good eyepiece magnification can reveal Saturn’s rings.

5. In theory the planet is a floater

Due to its composition of gases (earlier handled), Saturn is less dense than water. A bit of science, density is defined as the mass per unit volume ratio. So the density of water is 997 kg/m 3 at 25 degrees Celsius.
Additionally, 1g/cm 3 or 1000kg/m 3 is also the correct density for pure water. Saturn has a density of 0.69 g/cm3 or 687 kg/m³. So, it’s less dense than water. Meaning that if there was ever found a water body large enough to float the planet on, it would float. Of all the solar system, it’s the only planet less dense than water. 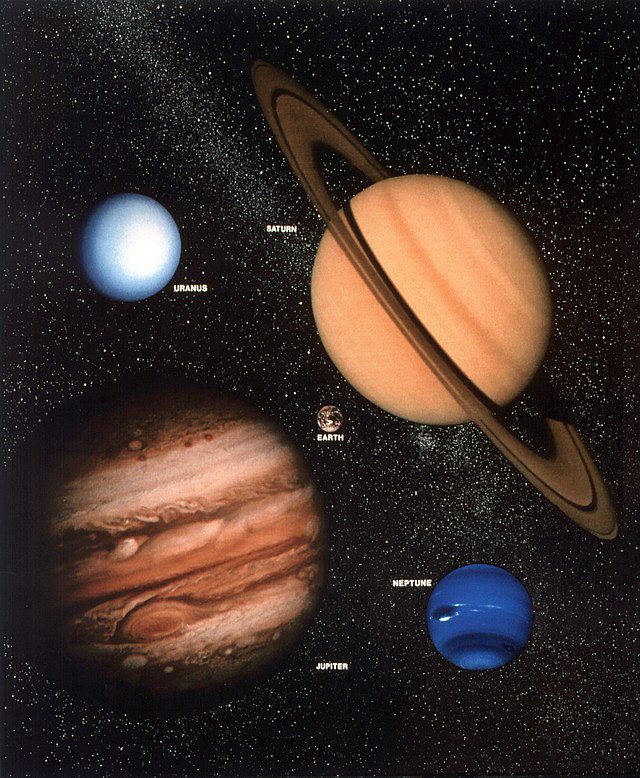 The spinning of a planet on its axis once a day is what is called a rotation and is the result of a complete day. Saturn rotates very fast on its axis which causes its day to be between 10-11 Earth hours.
Moreover, the cause for a super speed rotation is debatable among scientists. Most planetary experts hold the view that the gas atmosphere of the planet increases its angular momentum leading to rapid rotation.
Neptune also rotates faster than Earth. Read more here, Top 10 Facts about Neptune.

8. One year in Saturn is almost 30 Earth years

A year on a planet is marked by one revolution (orbit around the sun). So, Saturn takes 10,756 Earth days to go around the sun. Thus this is estimated as 29.4 Earth years.
The reason why Saturn takes such a long time has various versions. First, its distance from the sun is nearly 10 times the distance between the Earth and the sun. What’s more, it orbits the sun at a slower speed. Because its rings cause a magnetic field that brings a force in the opposite direction of the original motion, slowing down its spin speed.

9. There is no consensus on how old Saturn’s rings are

Scientists are divided on this subject. Some theories argue the rings came about 4.5 billion years ago when the solar system was forming. Others say it could have happened in later years. But another group stated that Saturn’s gravity tore apart a massive ice moon. Thus the breakaway fragments formed the rings. Who is right? Be the judge.

10. One or two of Saturn’s moons can support life 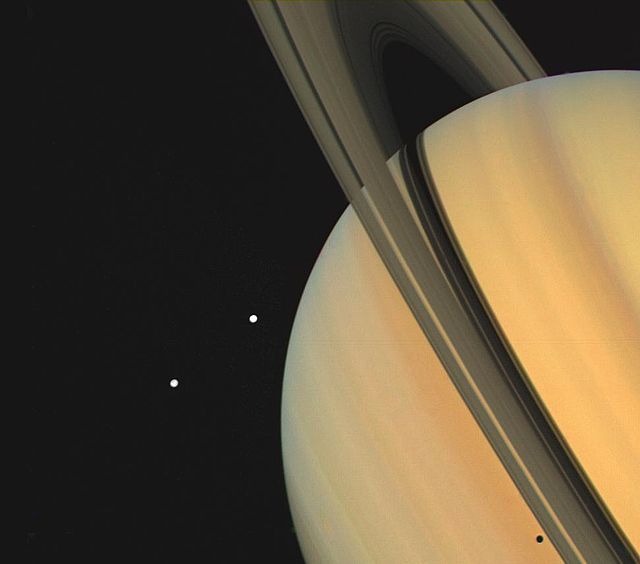 Saturn and two of its moons, Tethys (above) and Dione by NASA/JPL from Wikimedia Commons

Saturn has no conducive environment for life to survive but it seems there is hope for the same on some of its moons. It has about 83 moons. Sixty-three moons as of 2022 are confirmed and named but 20 are under scrutiny by International Astronomical Union (IAU). They await confirmation of discovery and official naming by IAU.
These moons are different in size with some as big as planets while others can only be equal to a sports arena. Titan is the biggest of Saturn’s moons. It is like the planet Mercury in size.
According to NASA’s spacecraft Cassini which stayed in Saturn’s space from 2004 to 2017, Titan seems conducive for life. It has a thicker atmosphere than that of earth and is full of organic compounds a good sign for life support.
Enceladus is the other prospect for life on Saturn. It contains an underground ocean that is ice covered. You’re aware that anywhere there is a mention of the presence of water, it sparks the thought of life survival around that zone.
Read more about the Earth’s moon here, 20 of the Coolest Facts about the Moon.
Here are quick facts about Saturn.

11. Saturn is oblate or flattened at the poles

This oblate shape is visible on telescopes. The shape is due to its high-speed spins which force its equator area to bulge. Hence the pole regions are automatically flattened.

Pioneer 11 by NASA launched in 1973 was the first attempt to explore the planet. Thereafter followed flybys and then the famous Cassini-Huygens mission that lasted from 2004 to 2017. There have only been four space programs for the planet as of 2022.

13. It has some of the fastest winds of all planets

14. The core of Saturn is quite Hot

Even though the planet has no surface, it boasts a rocky core. This area gets hotter than the sun’s surface, to a tune of plus 15,000 degrees F.