Paris - Activities & things to do, Paris - Attractions & museums - what to see, Paris - With children

Why You Should Visit the Philharmonie of Paris 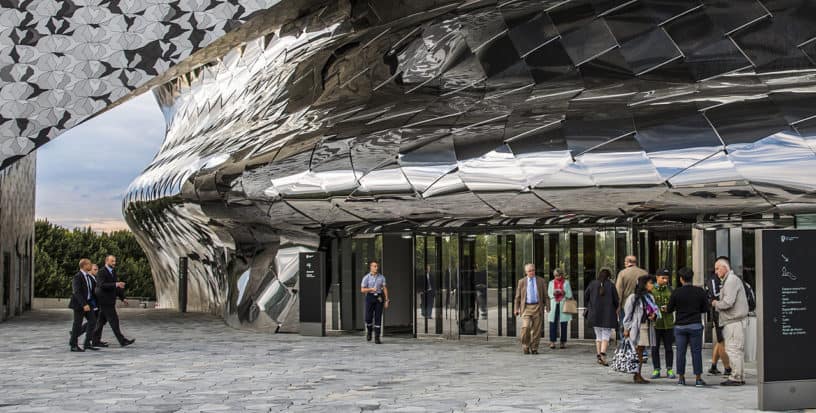 Why You Should Visit the Philharmonie of Paris

Music lovers, this one is for you! The Philharmonie of Paris is one of the most underrated cultural spaces of the French Capital. It is not only the most emblematic French symphonic concert venue, but also the home to a great variety of exhibitions and activities revolving around music.

I often go there to enjoy the concerts (my last one was the group 47Soul who somehow managed to turn the Philharmonie into a frantic dancing crowd) but also to visit the exhibitions and enjoy the Parc de la Villette.

Want to know why you should visit it and what to do there? Keep reading!

The History of the Philharmonie de Paris

I would go as far as saying that the Philharmonie of Paris is one of the most interesting building designs of Paris. Its most famous building was inaugurated very recently, on January 14th, 2015.

The Philharmonie de Paris is famous for its original design: an all-aluminum hill covered in horizontal and vertical slabs. 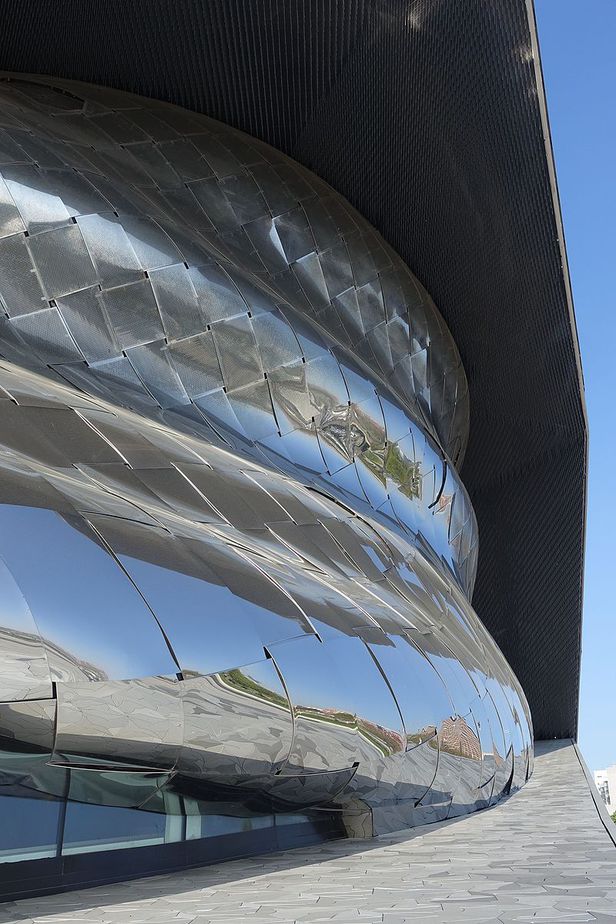 Jean Nouvel designed several of the most famous cultural buildings of Paris and even abroad, including the Musée du Quai Branly, the Institut du Monde Arabe, the Fondation Cartier and even the Louvre Abou Dabi.

Its main symphonic concert room fits 2400 seats, and its acoustic setting is one of the most studied and sophisticated of Europe.

The Philharmonie de Paris is built inside the Parc de la Villette (one of my favorite Parisian parks, which I will tell you about later on in this article). It was built on top of an old train station and sprawls on 19 800 m². 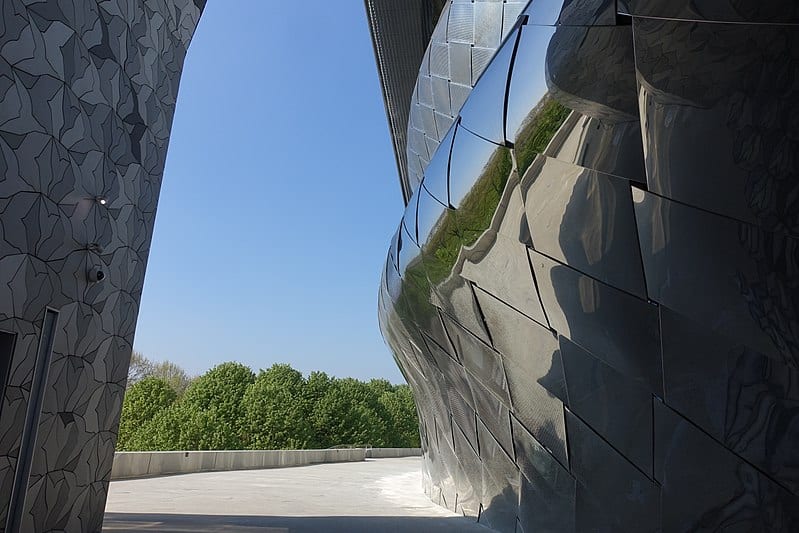 Even before entering the Philharmonie, take some time to admire the view of the building from the park.

If you are lucky enough to visit while it is sunny (which I definitely recommend since you will be able to enjoy the park as well), you will see the sun reflecting on the shiny silver building, which will make for a memorable view and picture.

What to do at the Philharmonie de Paris

The most obvious and iconic thing to do at the Philharmonie is obviously a symphonic concert; you can check the detailed program and prices here.

If you have the occasion, I would definitely recommend you attend one of their ciné-concert: a famous movie (Star Wars, Harry Potter, Lord of the Rings) displayed on a giant screen, while a symphonic orchestra simultaneously plays live the soundtrack of the movie. 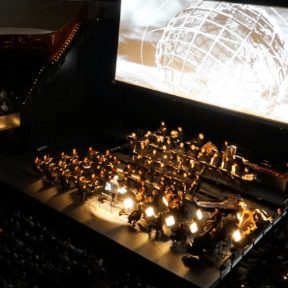 The ciné-concert I attended at the Philharmonie was one of the most memorable concert experiences I have.

However, the Philharmonie provides much more activities than only symphonic concerts. They present countless shows and more accessible concerts (jazz, rock, even electronic); check the details here.

There is also an interesting exhibition space (in the Cité de la Musique) which curates every semester a very complete and instructive exhibition revolving around music and often involving other media, such as video or photography. 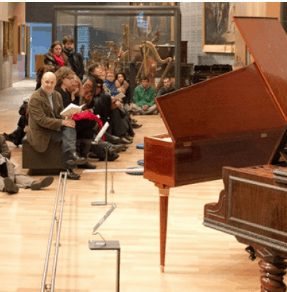 As surprising as it may sound, visiting the Philharmonie de Paris is also an amazing activity to do with children if you are visiting the French capital.

Indeed, they organize every weekend some children friendly events (count 10€ for two hours), where they initiate young kids to musical instruments or genres. More details and info on their website.

It can be a beautiful way to meet other Parisian families and to bond with your children around mutual discovery and learning.

As you can see, the Philharmonie de Paris is far from being only a symphonic concert venue – it offers plenty of activities to discover solo or with family or friends.

Around the Philharmonie de Paris

Another great reason to visit the Philharmonie de Paris is its location. The building is at the heart of the Parc de la Villette, one of my favorite parks of Paris.

It is an amazing reason to visit this part of the 19th arrondissement. I can assure you that only locals go there – tourists usually prefer wandering through the left bank.

When the slightest ray of sun points out, the parc de la Villette gets crowded with families and friends dancing, tanning or eating in the grass. 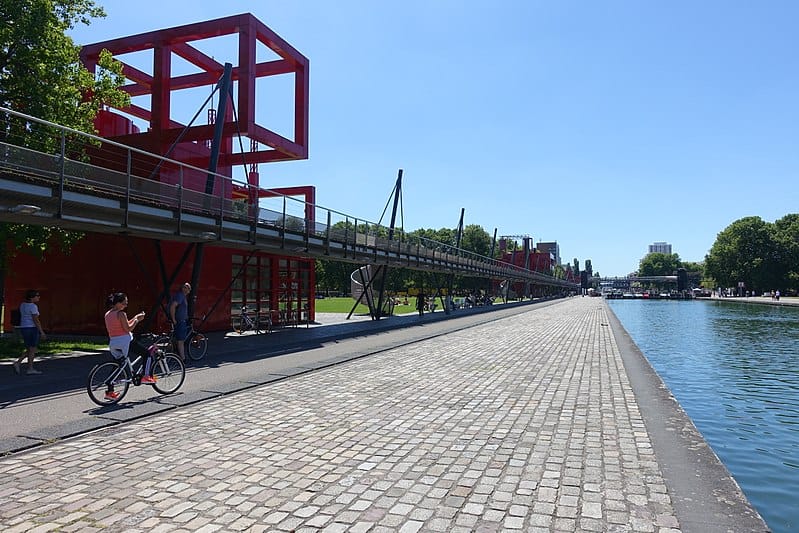 I would advise you to take an ice-cream cone or a waffle at one of the many trucks, and go sit in the grass while enjoying the views on the Philharmonie. I can guarantee that if you are willing to meet new people, you will definitely make some friends.

It is also the perfect place for an all day picnic in the sun.

I hope this article was useful to you and made you curious about the Philharmonie de Paris. If you are looking to explore Paris through the eyes of local Parisians, well, some of them are giving free tours to make you discover the hidden gems in their neighborhoods.

Opening hours :
Tuesday, Wednesday, Thursday, Friday from 12h to 18h
Saturday and Sunday from 10h to 18h
Closed on Monday
Open on evenings during concert nights